What a week in Alaska politics. The scandal with Anchorage Mayor Ethan Berkowitz and reporter Maria Athens went from a weird thing in Anchorage to an international incident in four days. I feel like I’m coming off a week-long 1970s Alaska pipeline style coke bender. So much has happened it’s all a big blur. I don’t know how people in business or politics operate on that kind of mental level for a sustained period of time. I’ll do my best to recap the events of the week. One important note, early voting in Alaska starts tomorrow. The November 3 general election is just over two weeks away. And one more thing. October 22 marks three years since the launch of the Alaska Landmine. Time sure does fly by. The Landmine would not be possible without our amazing team, readers, advertisers, and supporters. A big thanks to everyone for making the Landmine possible.

Evan Eads, one of the Independents running in Senate District B, withdrew from the race this weekend and endorsed the other Independent, Marna Sanford. Because Eads did this well after the August 31 general election withdrawal deadline, his name will still appear on the ballot. Sanford faces Republican Robb Myers, who narrowly defeated Senator John Coghill (R – North Pole) in the August primary. There is no Democrat in the race. The Landmine did a profile on this race last month, so it is of particular interest to me. This is a crucial Senate race. If Sanford wins it will make a coalition in the Senate very likely. If Myers wins it will likely ensure that Republicans control the Senate.

Calvin Schrage posted an endorsement this weekend from former Representative Charisse Millett. Charisse talking about honesty and integrity is rich. And getting an endorsement from someone who was soundly rejected two years ago by voters in that district is a weird flex. Full disclosure, I am helping Mel Gillis with his campaign. 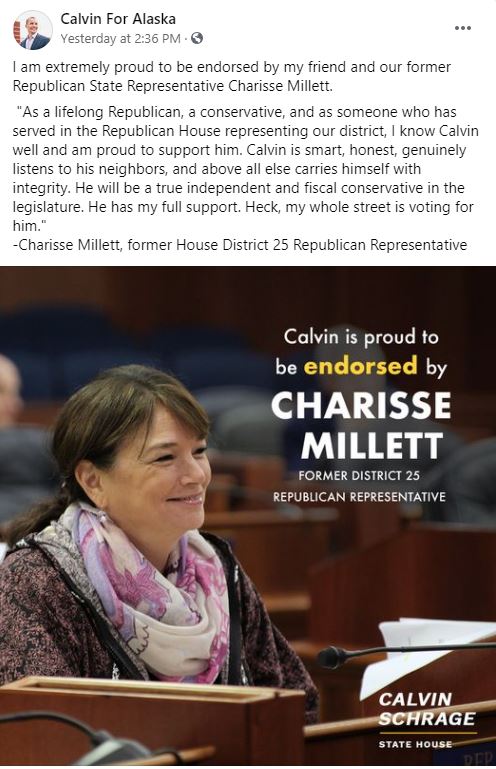 Legislative staff are held to a high standard and that is why I required my staffer, Adam Hykes, to immediately clear out his desk and submit a letter of resignation when he told me of his arrest.

Check out this gem. What an epic failure of an ad placement.

Here’s the full animation. This is just amazing. #akleg pic.twitter.com/ArzieMclUh

The Legislative Consultants of Alaska are conducting a survey to gauge the influence of media outlets in Alaska. If you want to participate, you can click here. The Landmine made the cut!

The Resource Development Council held a debate this week between Congressman Don Young and Alyse Galvin. It starts to get real loose at 45:25 when they can ask each other questions. Young asks Galvin about how she would do a land transfer. She gives an ambiguous answer. Then Young gives her a 101 on how to pass a bill. Then Galvin asks Young why he is running such negative ads when he has said in the past he runs positive campaigns. Young starts by saying, “The truth hurts,” and goes off from there. You can watch the whole thing here.

The Anchorage Assembly elected Austin Quinn-Davidson as the new chair at a special meeting on Friday. She will take over as acting mayor when Berkowitz’s resignation goes into effect on Friday at 6 pm. Felix Rivera was elected vice-chair, he will revert to chair when Quinn-Davidson takes over as acting mayor. This Landmine article breaks it all down, including options for a possible special election. Bill Falsey, municipal manager and current mayoral candidate, needs to either quit his job or quit the race after all that has happened. I’m surprised he has not said anything yet. I think he should drop out of the race and stay on as municipal manager. He’s very good at that job. At the end of the day he is part of the Berkowitz administration, which is now tarnished. We also need people in city government who are 100% focused on their job.

I had someone send in a nomination this week. It was pretty good. I told them under normal circumstances that person would be a real contender, but this week they are in about 12th place. I am too tired to do a write up on this week’s Loose Unit. I will say it’s a three-way tie between Ethan Berkowitz, Maria Athens, and Molly Blakeley. I will also say you need to read two articles if you already haven’t:

The Alaska Landmine article by me and Paxson Woelber:

A booze-infused cookie business, a rogue reporter, and an escort: The downfall of Anchorage Mayor Ethan Berkowitz

This Defector article by Chris Thompson and Maitreyi Anantharaman:

Some Shit Is Going Down In Alaska, Man

The Defector one starts off, appropriately, with:

We would like to share the story of an insane scandal, set in the darkening, far-flung town of Anchorage, Alaska. It involves a man named Ethan Berkowitz (above, center), who until very recently was the mayor of Anchorage and a presumptive contender for the governorship of Alaska; it involves a woman named Maria Athens (above, right), who until very recently was a reporter at a local TV station; it involves a local cookie-maker named Molly Blakeley (above, left), and Molly Blakeley’s adult daughter. There are more characters and many moving parts, but those are the principals. This will take two of us, because frankly no single human brain can process all this and still be capable of human language at the end.

I still can’t believe this all happened.

I nominate John Harris as possible “short guy that worked for the State”.

Falsey is doing an impeccable job at managing this city. His “campaign “ is basically a twitter account of factoids because he’s too busy working. Your attempts at tarnishing his reputation show the bias that has taken over this site. Goodbye.

Falsey is a professional manager. What the mayor has done, or not done, has NO impact in his reputation.

Stop casting shade for NO reason.

Jeff,
This isn’t North Korea. If you are complaining that he is distracted that is one thing; however, why would you assume the City Manager had anything to do with Berkowitz’s behavior and therefore should somehow be held responsible? Are you claiming to be “keeper of the “moral high ground” now? If so, remember that “moral high ground” comes to a very sharp point on which you (or anyone else) will find it very difficult to stand for long.

Landfield seems to have it in for Falsey. From the start he’s been posting conspiracy theories about him. My own conspiracy theory behind this is that Landfield is upset that Falsey won’t engage with him. All the other candidates play Landfield’s game: Evans writes posts for the Landmine, Duncan engages with him on twitter etc. etc.. Falsey on the other hand ignores the Landmine because Falsey is running a campaign based on experience – not partisan conspiracy theories. Landfield hates that he can’t get a rise out of Falsey so he keeps making crap up. Stay on the high road… Read more »

I don’t have it out for Falsey. I did a podcast with him last November. I think Bill is great. I would be happy to post a column from Falsey if he sent me one. It is irresponsible for Falsey to stay on as muni manager and be running for mayor with all that has happened. When he first filed I thought it was weird for him to stay on as manager because of his role negotiating labor contracts as a mayoral candidate.

You didn’t say “it was weird for him to stay on as manager” – you nominated him for loose unit of the week then posted memes claiming that he would misuse his position to garner votes. As noted by every other person posting here – the only irresponsible person is you attempting to drag Falsey down.
Also – I think your note about Falsey submitting a column reinforces my comment. Falsey doesn’t want to play your game and probably considers your site and readers toxic. And because of that you’re acting like a child.

Frank Murkowski stayed on as senator when he ran for governor so he could appoint his nepotism, daddy’s girl, daughter to assssssume his throne…………

Jeff, I worked with Bill Falsey a few years ago when he was Municipal Attorney on some major litigation involving the Municipality. I was super impressed. He is a very quick study and very thoughtful and insightful.  Bill has not done anything wrong and certainly doesn’t deserve any blow back here.

Gavin Christiansen (dropped out) in senate district F didn’t make the list this week? The dude is in jail for murder but he’s still on the ballot. That’s pretty loose too.

Ooh too bad America is on to the next dumb guy, caught on camera, Tobin and his Zoom mtg.

Jeff, you’re gonna be trying to ressurect your good week of exposure for the rest of your life. The rest of us see this as it is, consider adjustments and aim to do better.

Why you hatin? Is it because she was a woman or cuz she was black?