Brad Keithley’s chart of the week: Who should pay for the Port of A̶n̶c̶h̶o̶r̶a̶g̶e̶ Alaska

The entire focus of the piece pitted the Port against the Permanent Fund Dividend (PFD), arguing essentially that the current law PFD should be cut to free up funds for the Port. But cutting the PFD is only one of many funding options. There are others, with much smaller impacts on the bulk of Alaska families and the overall Alaska economy.

In many ways the editorial board’s argument is a repeat of those made by supporters of HB 259, the successor to HB 4003 which we discussed in a previous column late last year. That bill proposes making permanent cuts to the PFD, diverting the revenue instead to support K-12 education (and, in turn, freeing up the funds currently used to support K-12 for other, unspecified purposes).

Like the ADN editorial board’s argument for the Port, the argument behind HB 259 is that K-12 is more important than the PFD and thus, cutting the PFD to create a statutorily designated funding source for K-12 is good policy.

But as we explained in our piece analyzing HB 4003, that argument completely ignores the equally important second half of the analysis. The second half is, if K-12 deserves designated funding, what is the most equitable and lowest impact (to the overall economy) way of doing so. Assuming the question away by considering only one option is the antithesis of developing good fiscal policy.

As we explained in that piece, not only are there more equitable and lower impact means of doing so, using PFD cuts is the most inequitable and has the largest adverse impact on the overall economy of any of them. Put simply, it’s the worst of the options for funding K-12.

The same is true of funding the Port. Using the same approach as we did in analyzing HB 4003, here is who pays for the $600 million in Port repairs if funded through PFD cuts.

First off, it’s only Alaskan families. While they benefit as well, non-residents receiving Alaska income would contribute nothing.

Second, because PFD cuts are hugely regressive, the burden would fall hardest on middle and lower income Alaska families. Using the same distributional analysis from the Institute of Taxation and Economic Policy (ITEP) we used in analyzing HB 4003, here’s the impact on Alaska families by income bracket of using PFD cuts to fund the Port. 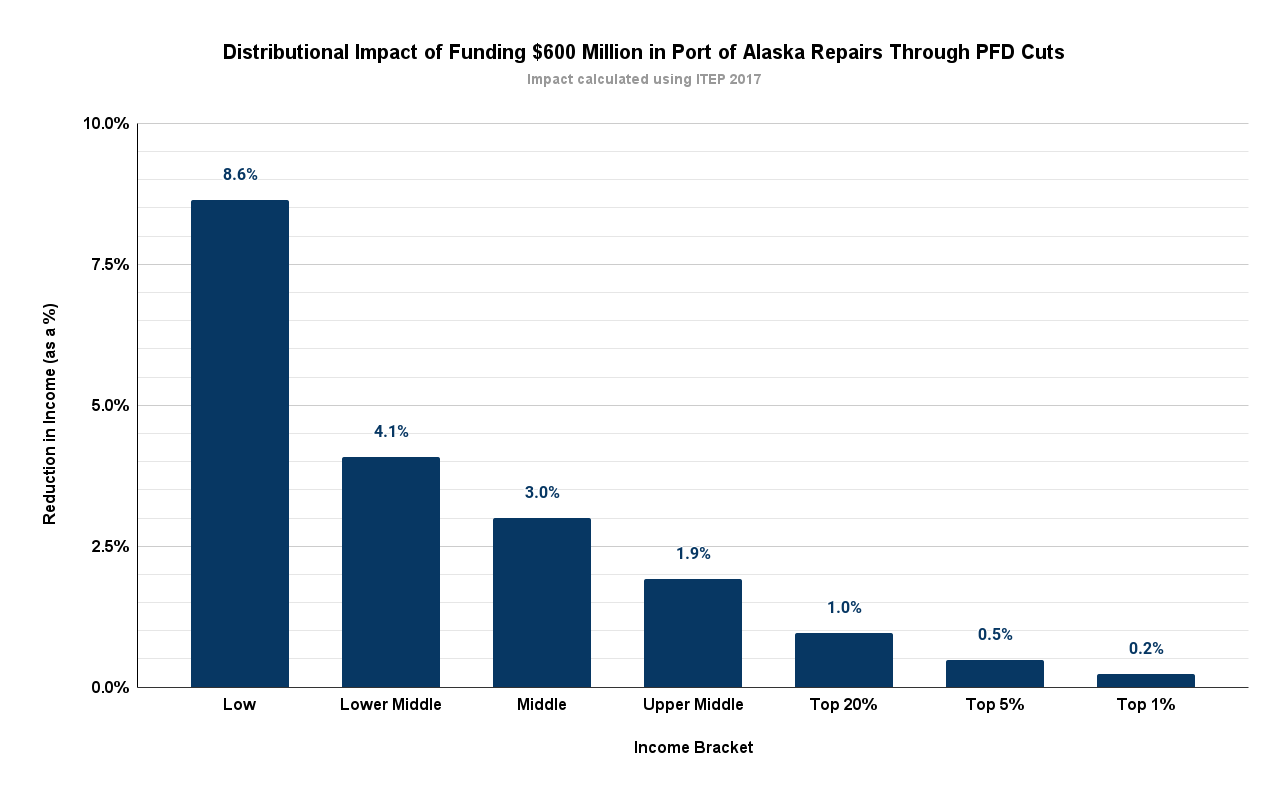 And not only is it the most inequitable, using PFD cuts as the funding source also would have the worst impact on the overall economy. As the University of Alaska – Anchorage’s Institute of Social and Economic Research (ISER) has previously concluded, because “[t]he impact of the PFD cut falls almost exclusively on residents, and it is highly regressive … it has the largest adverse impact on the economy” of any of the various revenue alternatives.

As we explained in discussing HB 4003, there are a number of other, far more equitable and lower impact options for raising $600 million to help fund the Port. The following chart compares the three most commonly mentioned – sales tax, flat tax & personal income tax – against PFD cuts, using the same distributional approach as above. 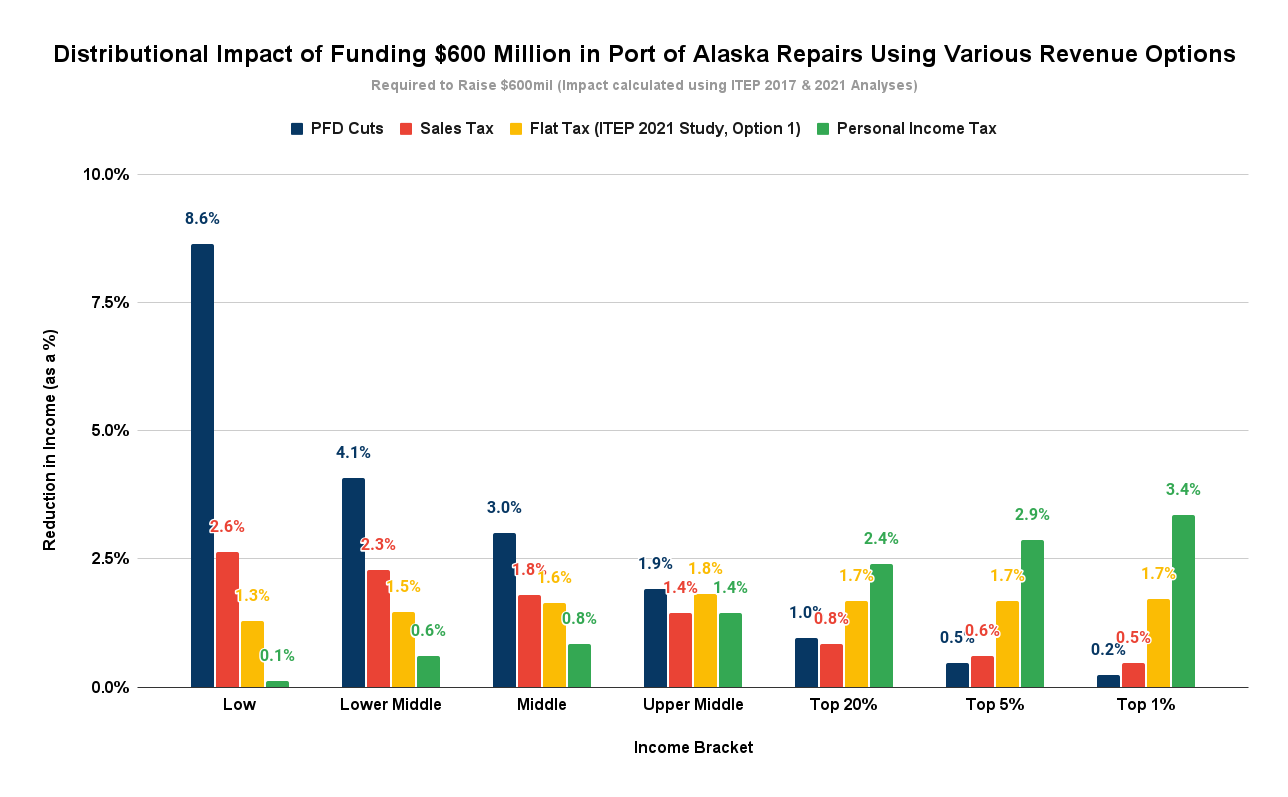 As is clear, any of the other options is more equitable than using PFD cuts. Even the second most tilted after PFD cuts – a progressive income tax – takes less from the top 20% of Alaska families (2.4%) than PFD cuts take from the bottom 60% (3% – 8.6%).

And because they are less regressive and apply also to non-residents, the other options also have a far lower adverse impact on the overall Alaska economy.

As we discussed in another previous column on these pages (“The Yuppie Version of Fiscal Responsibility”) responding to yet another ADN editorial board op-ed, we understand what the editorial board is up to. Their goal is to protect the top 20% – particularly the young urban professional segment of it – from bearing any significant share of the costs of providing government services, now or in the future.

Of course, the best way to do that is to cut the PFD and divert the “free money” being generated by the Permanent Fund instead to the direct benefit of the top 20% by subsidizing the tax burden they otherwise would face to help pay for government services.

In fact, it’s clearly not. As both ITEP’s and ISER’s analyses make clear, of all the various revenue options using PFD cuts to finance spending has the “largest adverse impact” both on 80% of Alaska families and the overall Alaska economy.

At various points, the ADN op-ed makes the point that the Port deserves state funding because, “more so than” other projects it benefits all Alaska regions and families.

If that is the case – and we agree it may well be – then it should be paid for equitably by ALL Alaska families (and nonresidents who benefit as well) in a way that has a low adverse impact on the overall Alaska economy.

Using PFD cuts does neither.

Thanks for your voice of reason.
Union dues should support the rebuilding of the port as they gain by the construction and operation of the port by employing union workers. Second should be bonds that the general public can purchase with thier PFD or other money.