Brad Keithley’s chart of the week: The Yuppie version of fiscal responsibility

From time to time someone approaches us with an argument that all we need to do to achieve a sustainable budget “is build up the Permanent Fund to around $100 billion.” The theory is that at that point the annual POMV draw will be around $5 billion per year, which, together with even only a moderate level of traditional revenues, will be sufficient to continue to fund a “comfortable level” of government indefinitely into the future without the need for “additional revenues” (i.e., taxes).

With the Permanent Fund currently around $80 billion, the argument usually is that we should continue to make deep PFD cuts now, even during periods of high oil prices, in order to accelerate the build to the magic $100 billion mark. When asked what happens to the PFD once that level is reached, after a few moments that make clear they really haven’t thought about that much, the answer usually is some version of “whatever is left over after we pay for government.”

We were reminded of that argument while reading an Anchorage Daily News editorial board op-ed from earlier this month entitled, “What happened to fiscal responsibility.” The focus of the op-ed was to criticize the recent Alaska House Coalition proposal to add a one-time, $1,300 “energy relief” check to this coming fiscal year’s PFD.

The op-ed argued that, rather than make the “energy relief” payment, the Legislature should instead plow the money back into the Permanent Fund or Constitutional Budget Reserve to be invested. Similar to the “$100 billion” argument, the op-ed focused on the future benefits such an investment would produce. Rather than going to current Alaska families, “the $875 million the state saves would earn more than $43 million in interest each year. That’s almost half the amount the state spends on the Department of Law – paid for in perpetuity.”

Over the years we have come to call that approach the “Yuppie version of fiscal responsibility.” (For those unfamiliar with the term, “yuppie” is an acronym for “young urban professional”.)

We originally termed it that because, when we first started hearing the argument, it largely came from Anchorage “young urban professionals.” Over time, however, we have continued to use it mostly because, at least in our view, it does a good job of pinpointing some of the significant beneficiaries of the approach.

The supposed benefit of the “$100 billion” approach is, by making deep PFD cuts and plowing any remaining revenues into Permanent Fund investments, it not only enables the state to avoid needing “taxes” to pay for a “comfortable level of government” today, it does the same on into the future as well. As the argument goes, the “sacrifice” of reduced PFDs is well worth that ultimate benefit.

But that’s only partially true. While the “sacrifice” is certainly worth that benefit for a few – including Alaska’s Yuppies – it’s not for most Alaska families.

To understand why, it’s useful to look at the impact of the approach first on current Alaska families, then on those here once the “$100 billion” mark is reached (which, on its current trajectory, is sometime after 2030).

As regular readers of this column hopefully will immediately recognize, the answer to the question of “who benefits” among current Alaska families from using PFD cuts to fund government is simple – those in the top 20%. They avoid taxes to pay for government, contributing a trivial share of their income instead in the form of PFD cuts.

The answer to “who is paying for that benefit” is similarly simple – those in the remaining (sometimes referred to as the “bottom”) 80%. By using PFD cuts, they contribute more – in most cases much more – than they would under any other alternative revenue approach.

Put in graph form, it’s this: 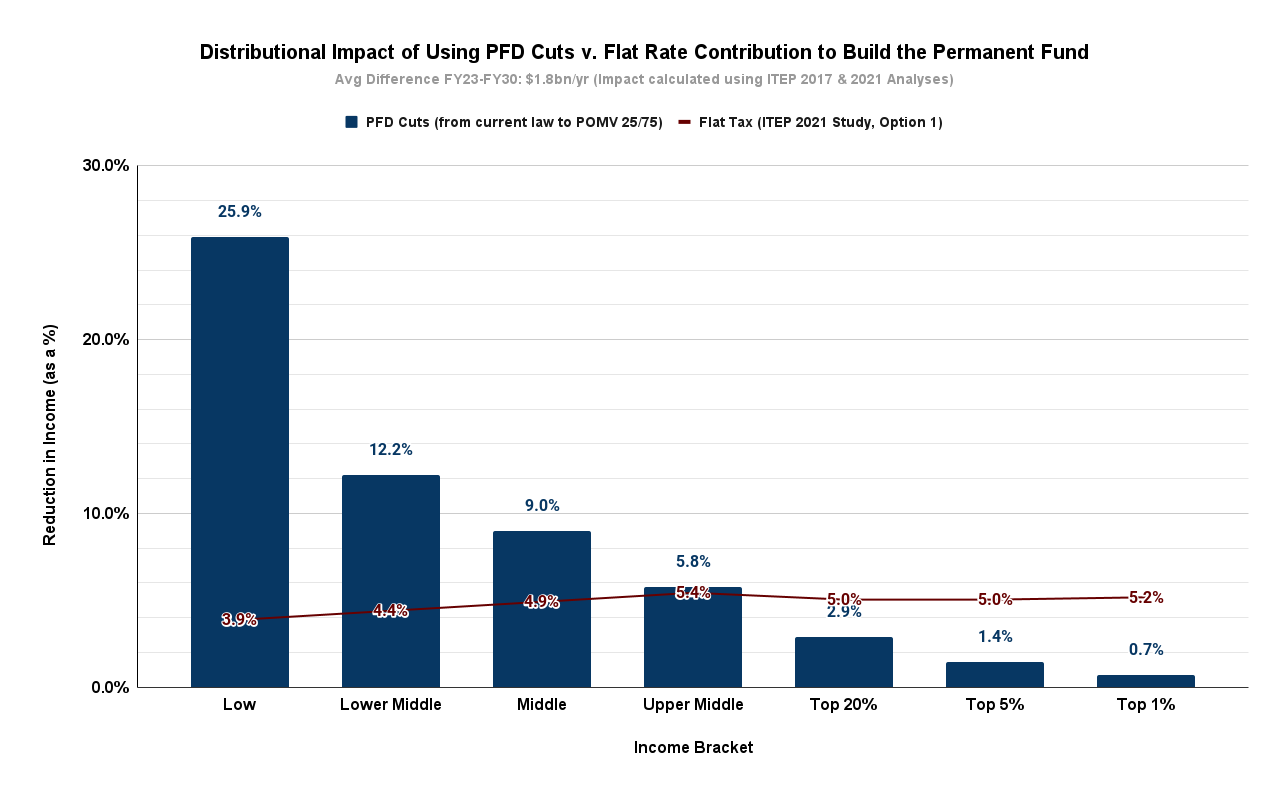 The chart shows, in blue, the average annual distributional impact over the next decade of reducing PFDs to POMV 25/75 – the approach currently being pushed by many in the House Majority and implicitly supported in the recent ADN editorial – in order to fund current government and continued contributions to the Permanent Fund without the need for “taxes.”

The red line shows the distributional impact if all Alaska families (and non-residents receiving income from Alaska sources) instead put the same skin in the effort – i.e., contributed in the aggregate the same overall amount as being taken through PFD cuts, but proportionately as a share of income rather than regressively.

It is clear who currently pays and who benefits from using PFD cuts compared to the alternatives. Compared to a flat rate contribution (and every other revenue alternative), achieving the desired outcome through PFD cuts comes at the expense of the 80% of Alaska families who contribute more as a share of their income than they would under alternatives.

The beneficiaries are the top 20% – and even more so the top 5% and top 1% – who get by with contributing substantially less as a share of their income toward the objective than every other Alaska family.

Put simply, the $100 billion/’”no taxes” nest egg is being built currently on the backs of middle and lower income Alaska families while the top 20% escape with contributing trivial amounts.

That approach might be worth discussing – and indeed, potentially supporting – if, once at the magic “$100 billion” mark, those bearing the bulk of the burden currently (or subsequent generations falling in the same brackets) received some benefit from the sacrifice. But they don’t. Instead, in order to continue the goal of “no taxes” even once the “$100 billion” mark is achieved, future PFD levels remain suppressed as well.

Using the Department of Revenue’s updated (as of February 17) Fiscal Model to take a look forward to that point, additional revenues will still be needed to balance the budget once the $100 billion mark is achieved (on its current path, shortly after FY2030) even with the added revenue from the higher POMV draw. 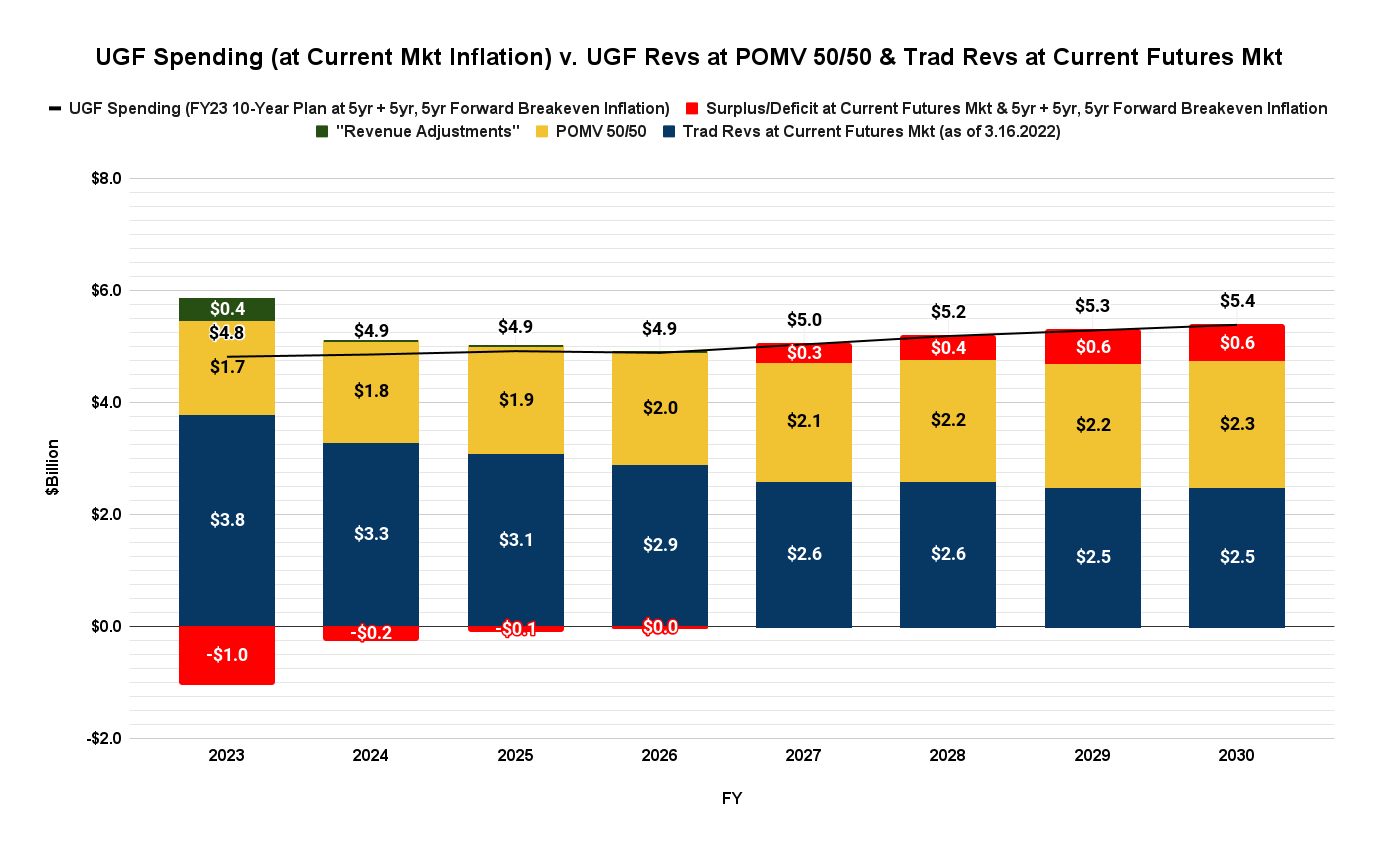 As the above chart indicates, even with the added revenue from the higher POMV draw and even using Governor Mike Dunleavy’s (R – Alaska) proposed POMV 50/50 approach as a baseline, deficits (red above the line) reappear by FY 2027 and continue thereafter. Since the approach’s solution to deficits is PFD cuts, future Alaska families will continue to face deep PFD cuts even after the “$100 billion” mark is reached.

All that happens as a result of reaching the “$100 billion” mark is that then-top 20%’ers become even more secure that the need for revenues won’t reach them.

Why is the approach popular among Yuppies?

As discussions with them indicate, they view it as sort of a mid- to late-career insurance policy. Confident that they will reach the top 20% at least by the time the “$100 billion” mark is achieved, the approach ensures that they will remain protected from taxes as they reach and continue through their prime earning years.

For those already in the top 20% it’s even better. They don’t have to pay taxes now – or later. It’s the ultimate win-win (for them).

There’s another category that also views it as beneficial – those that are focused on maintaining, if not growing government services (and thus, spending levels). Concerned that requiring taxes from the top 20% would result in increased scrutiny of and pushback on those levels, they welcome speeding up the build to the “$100 billion” mark as added insurance that day never comes (or at least is kicked much farther into the future).

What about the “bottom” 80% who are making the sacrifices now to accelerate the build to the “$100 billion” mark and will continue to make sacrifices later as the top 20% reap the benefits of the build; in other words, those on the lose-lose side of the equation?

The response we usually receive is 🤷 – essentially, that it’s someone else’s problem.

From a purely analytical point of view, the thought process is impressive. As a personal financial planning tool, finding a way to have others build and thereafter maintain an insurance policy against having to pay personal or in most cases, significant business taxes is somewhat ingenious.

And to some degree another retort we sometimes hear in the discussions is also true. Why should “Alaskans for Sustainable Budgets” care, some say; the approach better ensures future budgets will balance, and thus, are more “sustainable.”

But to us, “sustainable” budgets are about much more than ensuring the dollars on the left hand side of a ledger arithmetically balance with those on the right. Achieving long-term, “sustainable” budgets also involves issues of equity and economic impact. And as we’ve discussed in previous columns, we know that, of all of the various revenue options, budgets built on PFD cuts have the “largest adverse impact” on both 80% of Alaska families and the overall Alaska economy.

The “Yuppie” approach ensures that “largest adverse impact” continues both today as well as long into tomorrow.

As a result, as ingenious as it may be, the approach is one with which we have significant problems. Calling on the “bottom 80%” to make the top 20%’s life better both today and tomorrow is problematic even if wrapped in the cloak of “sacrifice.” The sacrifice isn’t shared and isn’t to ensure a better life later for those making the sacrifice now. It’s just to make the top 20%’s life better during both periods.

That doesn’t mean we support “big” payouts to make the “bottom” 80%’s life even better yet. But it does mean we support maintaining the current statutory – or at a minimum Governor Dunleavy’s proposed POMV 50/50 PFD – even if that means current and future top 20%’ers also have to throw a little into the pot themselves along the way in terms of taxes to pay for an equitable share of government costs.

Pay your bills first Alaska. After all of the creditors have been reembursed then you may start saving for the future. That’s how I run my house. Alaska owes money to every man woman and child and a few oil companies that they have screwed over since Dollar Bill Xi Walker started this ripping off the people of this great state.

If 80% of the voting population continues to vote for politicians who support policies that hurt themselves in favor of the 20%, then they’re getting what they deserve.