Brad Keithley’s chart of the week: What was Governor Hammond thinking

Recently, I have been rereading former Governor Jay Hammond’s writings on fiscal policy, particularly the PFD. The most extensive is Diapering the Devil, published posthumously from the Governor’s notes and available online here as Chapter 2 of “The Governor’s Solution.” Useful and corroborating insights are available also from Hammond’s two other books, Tales of Alaska’s Bush Rat Governor (available online here) and Chips from the Chopping Block: More Tales from Alaska’s Bush Rat Governor (available from Amazon, here).

I had read all three books when they were first published, and then returned from time to time as the PFD began to come under threat in the mid-2010’s to better understand his views on the theory behind it. But to be honest, I had not spent much time reading the portions related to an income tax, treating that as somehow a separate issue, and believing instead, when push came to shove, spending cuts alone would be sufficient to protect the PFD.

As we saw in 2019, however, they weren’t. Faced with the clear binary choice of cutting spending or continuing to cut the PFD, the Legislature chose to continue cuts to the PFD. Indeed, Governor Mike Dunleavy (R – Alaska) couldn’t even get 16 (out of 60) legislators, the Constitutional minimum to affirm appropriations vetoes, to back him up on the level of spending cuts required to restore the current law PFD.

While some that continue to advocate “spending cuts only” believe it’s only a matter of electing “real conservatives” to reverse that outcome, after studying the overall electoral results since 2019 and analyses of the recent redistricting we have come to appreciate it is highly unlikely a broadly based legislature will ever muster sufficient votes to achieve that objective. At the legislative level, Alaska is significantly more purple than some think.

Instead, by failing to develop substitute revenues, we have come to believe that holding out for “spending cuts only” serves only as an alternative path to ensuring that increasingly deeper PFD cuts continue.

That realization sent me back to reread Governor Hammond’s writings again, this time spending much more time on his comments about an income tax, which was repealed over his objection in 1980 in the same session as the passage of the initial PFD. In doing so, this passage from Tales of Alaska’s Bush Rat Governor recounting his position on repeal suddenly resonated:

Reduce [income taxes] if you will; suspend it if you must. But for heaven’s sake, don’t repeal [income taxes] or you’ll cut the one string connecting the citizen’s pocketbook to the government purse, and see state spending soar. If people no longer feel it’s their tax dollars ‘those idiots in Juneau are spending,’ a major restraint on government spending growth and spending will be lost. Once repealed, we’ll never get it back until we’ve raided all other revenue sources [including the PFD] ….”

In previous readings I had skipped quickly over that section, believing as I said that cuts in the PFD would do the same thing as an income tax: trigger a successful pushback on spending levels. But they haven’t. So, this time I stopped to reflect on why Governor Hammond thought an income tax would do what PFD cuts have not.

After thinking about it, the answer became clear. PFD cuts and income taxes don’t motivate the same set of voters.

As we have noted in previous columns, PFD cuts fall heaviest on middle & lower income Alaska families, the so-called “bottom 80%” (when being compared to the top 20%). They have a minor, indeed, trivial impact on the top 20%. This from the Institute on Taxation and Economic Policy’s 2017 study of various Alaska fiscal options shows the distributional impact: 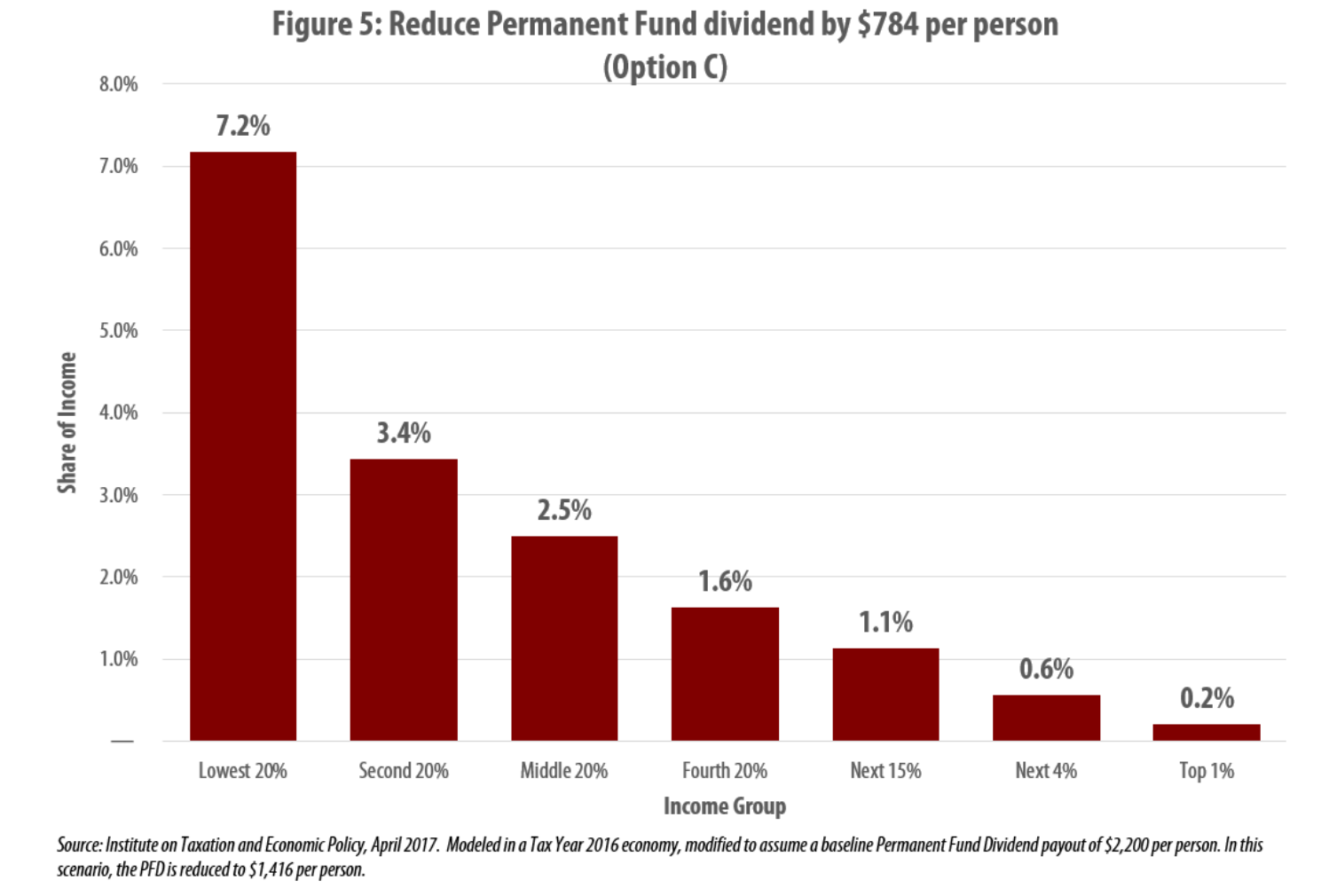 On the other hand, a progressive income tax – what most think of when seeing the words “income tax” and the type of income tax in effect at the time Alaska’s was repealed – does the reverse.

It falls heaviest on upper income Alaska families, while it has an increasingly smaller impact on the “bottom” 80%. 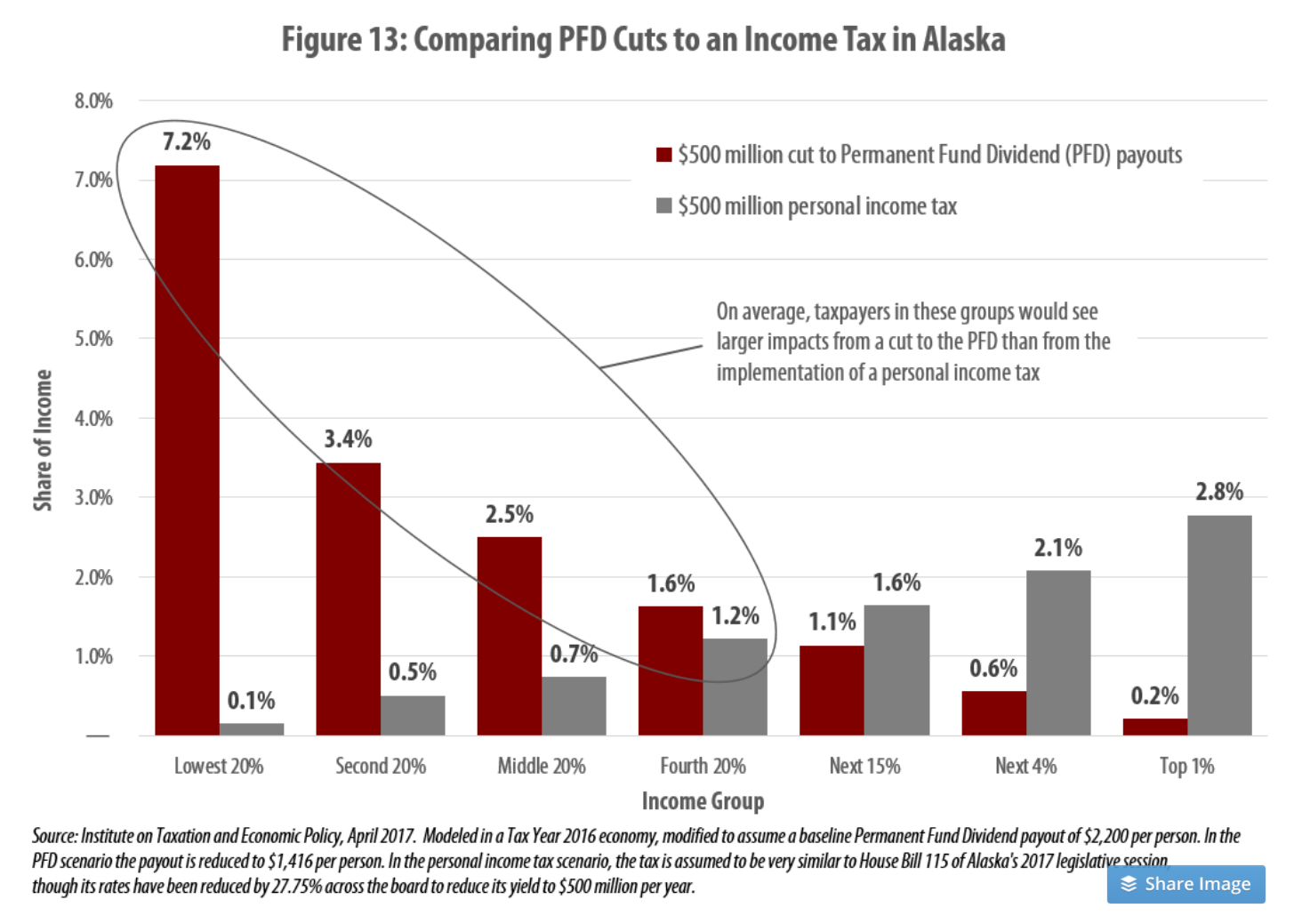 By prioritizing an income tax, the “people” Governor Hammond was looking to incentivize as “a major restraint on government spending growth” specifically was the top 20%.

Why them? Easy. As we discussed in a previous column, they are the ones that have the most political power. Put in context, what Hammond really was saying was “… don’t repeal [income taxes] or you’ll cut the one string connecting [the top 20%’s] pocketbook to the government purse, and see state spending soar. If [the top 20%] no longer feel it’s their tax dollars ‘those idiots in Juneau are spending,’ a major restraint on government spending growth and spending will be lost. Once repealed, we’ll never get it back until we’ve raided all other revenue sources [including the PFD] ….”

Turns out, that’s exactly what has been happening.

Why has state spending remained at levels requiring additional revenues over the past five years? Because it’s not the top 20%’s “dollars ‘those idiots in Juneau are spending.’” Instead, by using PFD cuts ‘those idiots in Juneau’ are spending dollars that are significant only to the “bottom 80%.” Why haven’t so-called “fiscally conservative” legislators, such as Senator Natasha von Imhof (R – Anchorage) and Representative Kelly Merrick (R – Eagle River), pushed back harder on spending? Because it’s not their – nor their donors – dollars they are using. It’s the bottom 80%’s.

Sometimes, when discussing this with others, the response is “all that you want is for the legislature to have even more money to spend.”

But that’s not what Hammond was suggesting – nor is it what we are.

Rather, in Diapering the Devil Hammond put his objective this way:

[H]ad the income tax been suspended like a Damoclean sword over the legislature, threatening to decapitate them if they permitted spending to spin out of control … spending would have been greatly curtailed and there would likely be no fiscal gap. After all, the best therapy for containing malignant government growth is a diet forcing politicians to spend no more than that for which they are willing to tax.

Can we – five years after the Legislature has broken into the PFD and with its members (and their campaign treasuries) dominated by the top 20% – ever reinstate Hammond’s vision? That’s the $1.8 billion – the level of this year’s PFD cut – question. The truth is I don’t know.

Makes zero sense to hand out Universal Basic Income and then charge more in taxes to cover the difference.

“More in taxes”? Other states have an annual debate over taxes and how to spend them. In Alaska the argument is over how we should divvy up an annually self-replenishing pot of gold to which all of us have contributed precisely the same amount: Nothing. 80% of Alaskans want their PFDs. 20% of Alaskans want their annual tax-free gift of the government services that are the foundation of their wealth. 100% of the Outside & foreign businesses and investors who for 40 years have benefited from Alaska’s gracious invitation to avoid state taxation by funneling their profits through LLCs, S… Read more »

Excuse me
Merrick and Von Imhof are not Republicans.
Cut government spending, do not start another government entity and give us Our PFD.

Frank and Richie, re-read the article. If what you wrote is what you got out of this article, you missed the point.

What these articles omit is accounting for the other government money spent to assist lower income people.