Brad Keithley’s chart of the week: Why an income tax is better for 80% of Alaska families than PFD cuts

In our day-to-day discussions about fiscal policy we often refer to a 2017 Anchorage Daily News story, written by then-ADN reporter Nat Herz.

Under the headline “For most Alaskans, an income tax would hurt less than a PFD cut, report says,” the story covers a 2017 report by the Institute on Taxation and Economic Policy (ITEP) analyzing various revenue options then under consideration by the Legislature (2017 ITEP report).

Accurately summarizing the study, the story finds that “cutting Alaskans’ Permanent Fund dividends would hit middle-income Alaskans more than three times harder than a progressive income tax that would raise the same amount of cash”, and that “[e]ven upper-middle income Alaska families … would be slightly harder-hit by the dividend reduction.” 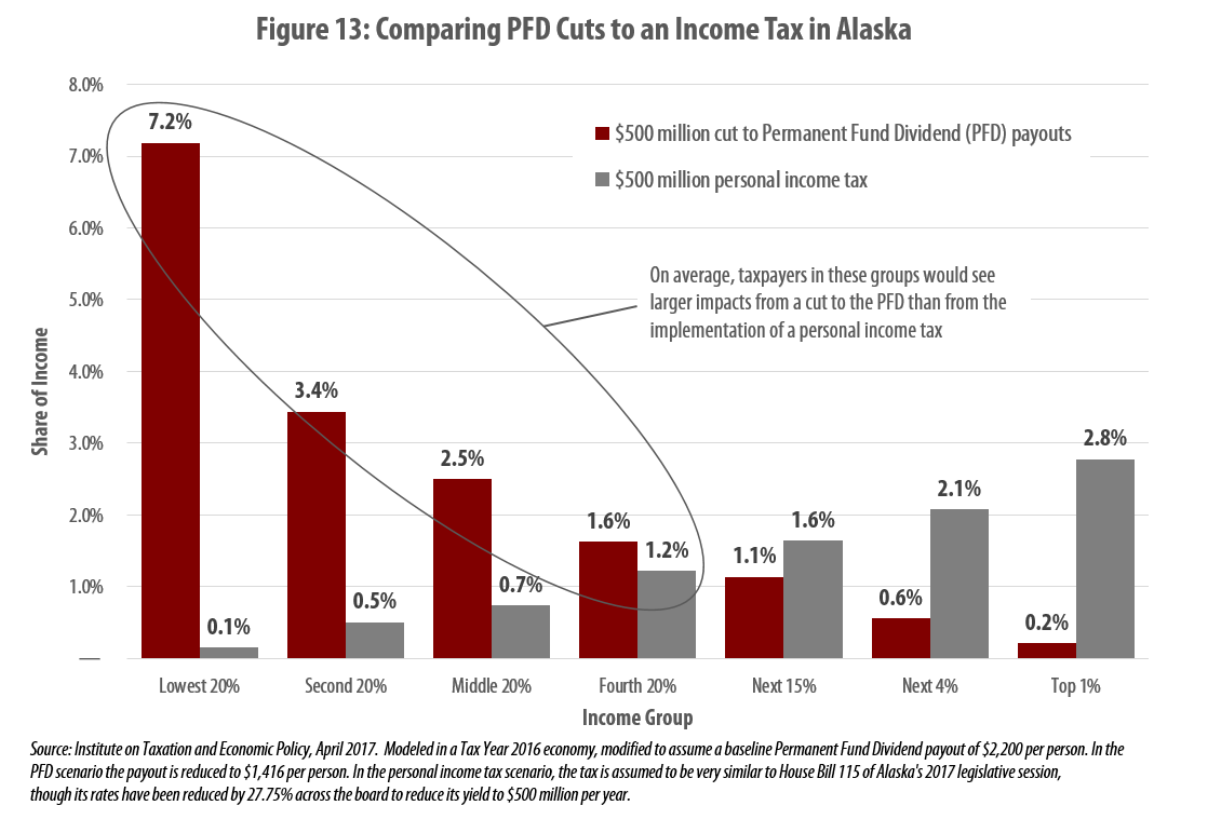 Generally echoing the quotes in the ADN story from Senator Peter Micciche (R – Soldotna), often we receive pushback that, as bad as PFD cuts are, income taxes are even more “bad” because they just push the burden to “working” or only the “top forty percent” of Alaska families.

Frankly, we think that pushback most often comes from those falling in the top 20%, who use the argument as cover in their efforts to preserve the substantial benefit they receive from using PFD cuts to raise revenue compared to other forms of taxes.

But as we drill down, we appreciate that sometimes it comes also from those in the upper middle, or occasionally, even middle income brackets who are concerned – notwithstanding the benefit to them – about potentially paying disproportionately for the costs of government compared to those in lower income brackets, and the potential for continued increases in that disproportionate burden as those seeking to increase government services push for additional spending.

Such generalized concerns, of course, often are based on perceptions or experience with the federal income tax, which does, in fact, push the largest share of the burden off on the top 40% of the income scale. Because it’s similarly progressive, those concerns also are relevant to the proposed income tax specifically analyzed in the 2017 ITEP study.

But – and here’s the important point – not all income taxes are progressive. There is another approach that resolves the concerns expressed by Senator Micciche and others.

At the request of the Legislature, in 2020 ITEP prepared a second report (2020 ITEP report), this time focused on a flat rate income tax, or what some also call a proportionate tax because it takes the same amount  proportionately from all income levels.

Such an approach is not new; indeed, Adam Smith’s – yes, that Adam Smith, the “father of capitalism” – seminal 1776 treatise on The Wealth of Nations recommends use of a proportionate tax as the first of his “four maxims of taxes” (“The subjects of every state ought to contribute towards the support of the government, as nearly as practicable … in proportion to the revenue which they respectively enjoy under the protection of the state.”)

As we discussed in our column on these pages last week, of the various flat tax options analyzed in the 2020 ITEP report, Option 1 is the flattest (most proportionate). 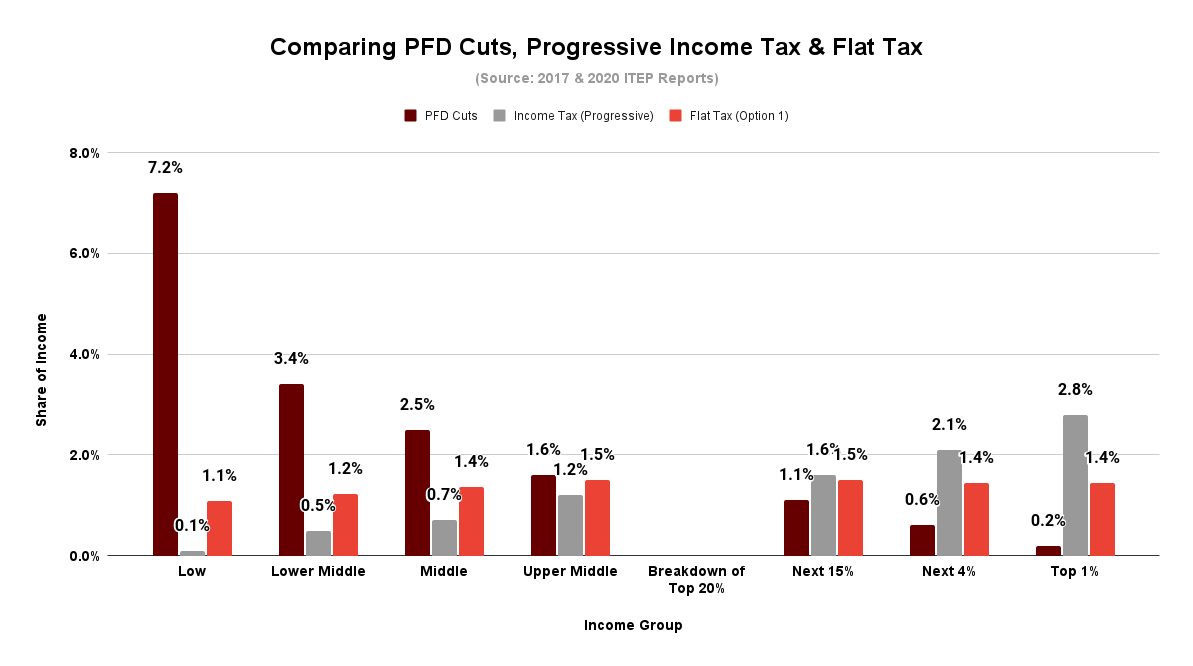 The same as the progressive income tax analyzed in the 2017 ITEP report – and subsequently discussed in Nat Herz’s ADN article – the “Option 1” flat tax still takes less from lower, middle and, indeed, upper middle income – in total, 80% – of Alaska families than PFD cuts.

But unlike the progressive income tax, the flat tax does not take disproportionately from the top 40%. Because it does not include the same type of deduction and stair-stepped rate structure that makes the 2017 income tax progressive, the difference between the share of income taken from the low 20% and the top 1% under Option 1 is only 1.3 times, far from the 28 times reflected in the 2017 income tax.

And, if it still offends some, even that minor difference is correctable. The reason the Option 1 rate is slightly lower at the lower end of the range than at the upper is because it excludes the PFD from the definition of income. Eliminating that exclusion would result in all income brackets paying the same, roughly 1.4% tax rate.

We realize that some will still respond, “any tax is too much,” or “taxation is theft,” or some similar mantra.

But here’s our point. The Legislature already is taxing Alaska families, heavily, through PFD cuts. And as the rejection of Governor Mike Dunleavy’s (R – Alaska) proposed 2019 spending cuts confirmed, we are not going to “cut” our way out of the need for some form of continued revenues.

As both the 2016 and 2017 reports from the University of Alaska – Anchorage’s Institute of Social and Economic Research (ISER) on the impact of various fiscal options conclude, using PFD cuts to fill the remaining fiscal  gap “ has the largest adverse impact on the economy,” and are, “by far the costliest measure for [80% of] Alaska families.”

There are far more equitable and lower impact approaches. Income taxes lead the list, and for those for whom a progressive income tax raises concerns, a flat rate (proportional) income tax provides a responsive alternative that still remains equitable to all Alaska families.

Yes. We need an income tax. Alaska’s days of single source revenue are dwindling. It’s time to set up Alaska for the future. I’ve watched politicians spend our cash like it’s endless for far too long (decades). How many hundreds of millions has Alaska wasted? We need new legislators and new revenue streams.

Tax as you must to make sure revenues are sufficient to pay for what the Legislature decides we must have. As to the PFD, just hand the money based on need and quit deluding Alaskans into believing it is a “Dividend”

No taxes cut the bloated government.

“The Legislature already is taxing Alaska families, heavily, through PFD cuts.” Don’t conflate withholding a benefit with taxation. Reduction or elimination of the PFD is not a tax.

The governor has imposed (indirectly) other taxes not mentioned here. By cutting revenue sharing to communities, by cutting school bond re-imbursement, communities have had to increase tax collection to stay in operation.

Our legislators should also be looking at what proportion of the potentially taxable income generated in Alaska goes to people & entities that are based Outside & in foreign countries.

That would give them an idea of how much of the PF earnings that fund 70% of state services are being allocated to fattening the purses of non-Alaskans.