Brad Keithley’s chart of the week: Looking at the Alaska Legislature from another perspective

Some will recall that in an earlier column we looked at the impact of various fiscal options on Alaska families and the overall Alaska economy. Our chart, taken from a 2017 study by the Institute on Taxation & Economic Policy (ITEP), focused on the impact of five different options on three different income brackets — those in the Top 5%, Middle 20% and Bottom 20% of Alaska households. 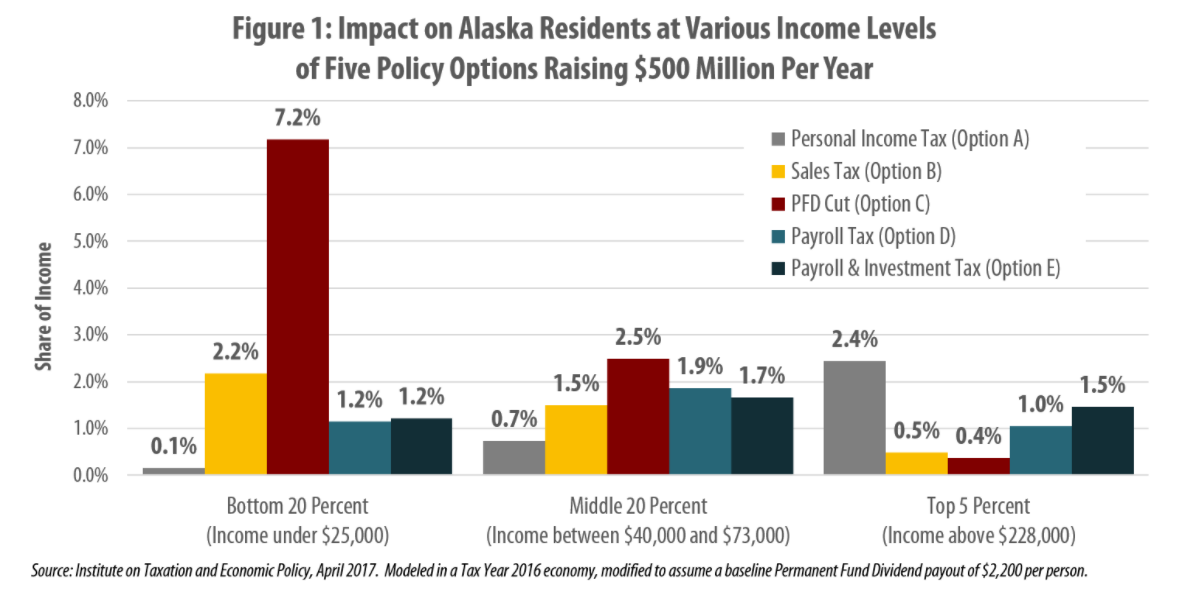 As the chart reflects, ITEP’s study showed clearly the same effect an earlier (2016) study by researchers at the University of Alaska – Anchorage’s Institute of Social & Economic Research (ISER) had identified, that by using PFD cuts middle and lower income Alaska families contribute a far larger share of income (“pay” far more) to fund government than those in the upper income brackets. Indeed, in a subsequent, follow-up study researchers at ISER found that, of all the options studied, “[a] cut in PFDs would be by far the costliest measure for Alaska families.”

The earlier ISER study also concluded that, because “[t]he impact of the PFD cut falls almost exclusively on residents, and is highly regressive … it has the largest adverse impact on the economy per dollar of revenues raised” by the various options.

What we did not explore as much in our earlier column was the impact of using PFD cuts on those at the opposite end of the spectrum — in the upper income brackets. As the ITEP chart clearly demonstrates, while PFD cuts have the largest adverse impact of the various options on middle and lower income Alaska families, they have the lowest impact of any of the options on the Top 5% of Alaska families.

Using data from the ITEP study, we have expanded the earlier chart to show the impact of the three options which subsequently have received the most attention from the Alaska Legislature — personal income tax, sales tax and PFD cuts — on all of the income brackets included in the study, from the Lowest 20% to the Top 1%. 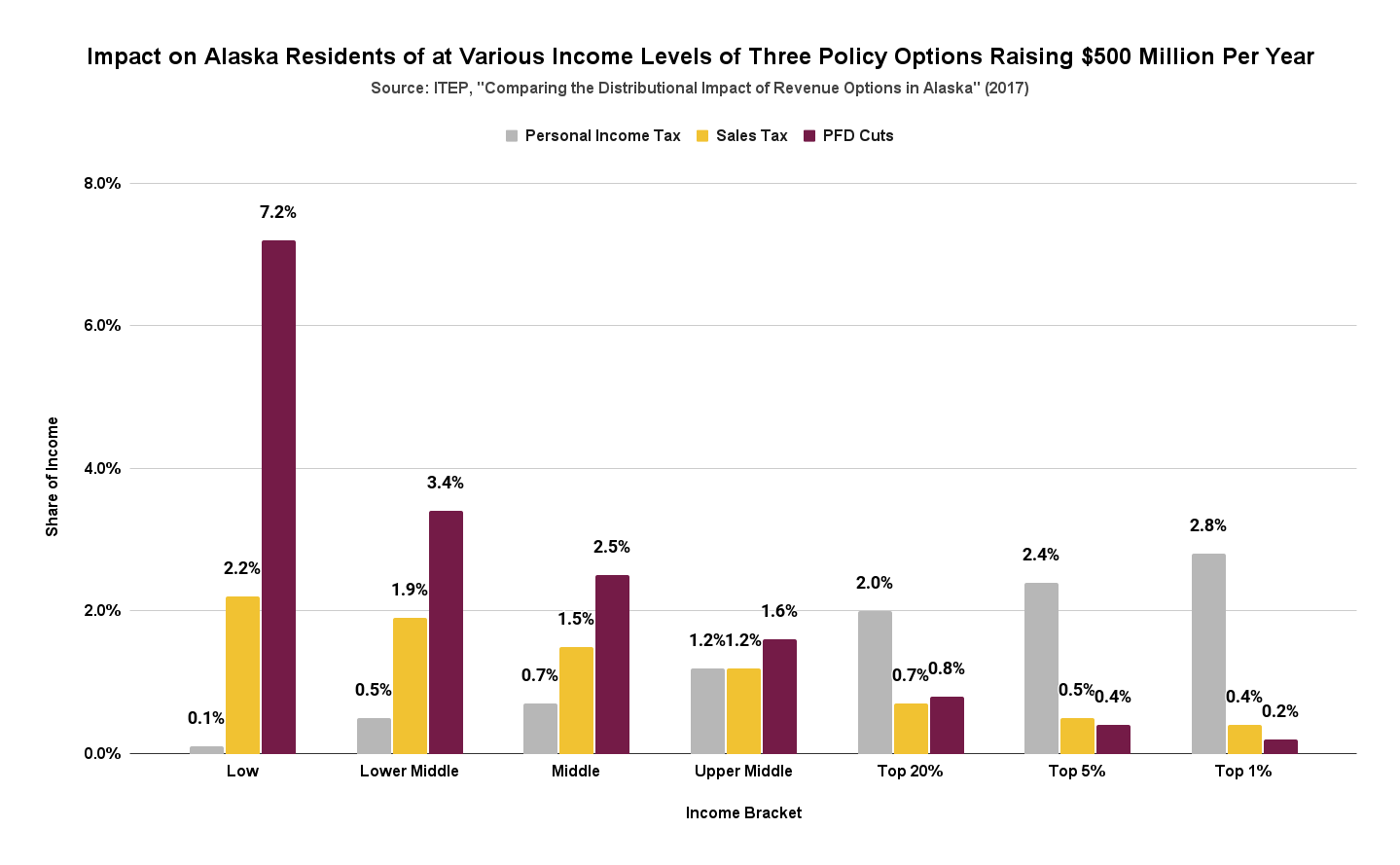 So, if PFD cuts have the largest adverse impact of all the options on 80% of Alaska families and the overall Alaska economy, why over the past 6 years has the Alaska Legislature used them not only first, but exclusively to raise the additional funds necessary to balance the budget?

To us, one answer — and perhaps the most important — is to look at the breakdown of the Alaska Legislature by income bracket.

Earlier this year, using data from the various APOC reports filed by legislators, the Alaska Political Report, published the income levels reported by each legislator. The data for the House is here, and for the Senate, here. The charts are published here with their permission.

The income level is reported by legislators as a range. Using the midpoint of the range for each legislator, we determined what income bracket they fall in, and then aggregated the numbers separately for the House and Senate.

The results are here. 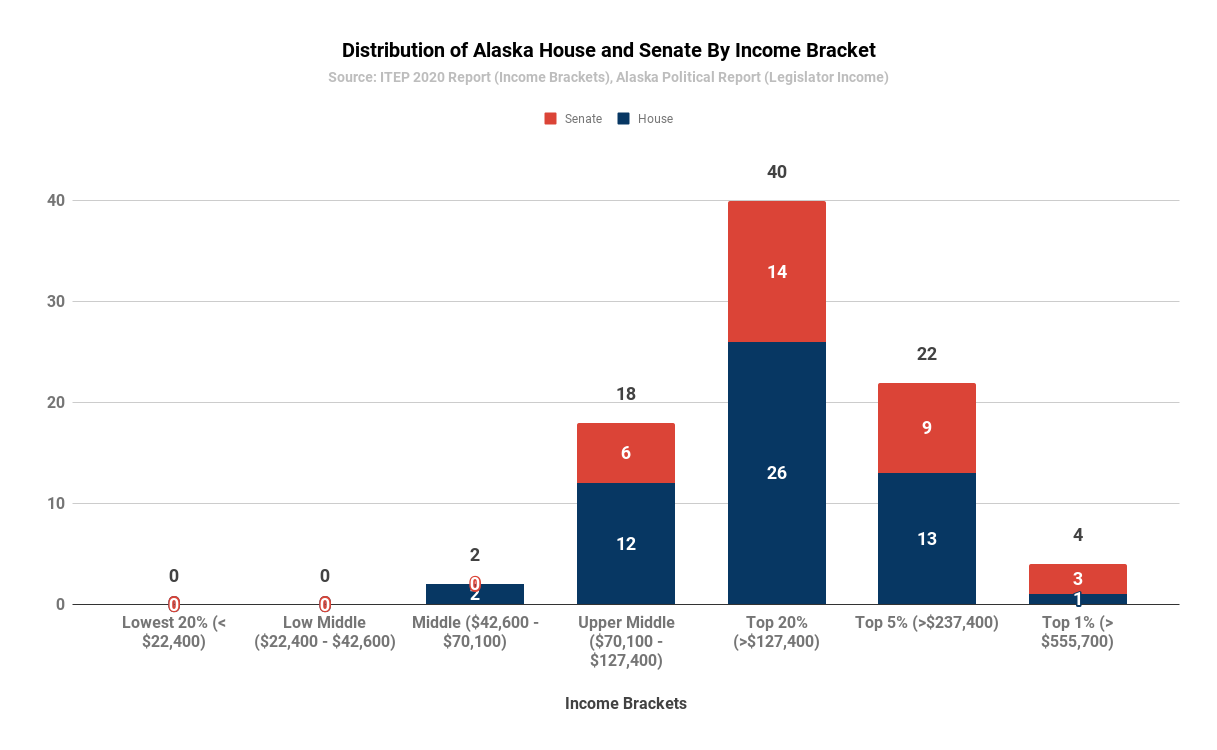 Not coincidentally, those two options — PFD cuts and sales taxes — appear to be the two most favored by most legislators.

On the other hand, only twenty, a third of the Legislature, fall in the Middle income brackets, from whom PFD cuts take the most of the three options, and none are in the lowest 40% of Alaska families, whom PFD cuts hurt the most.

This is not necessarily to say that, over the past six years, the Legislature intentionally has voted repeatedly for the option that, in the aggregate, best advantages the direct economic interests of a majority of its members, even though that option also has the largest adverse impact on 80% of Alaska families — although that certainly is the result.

What it does say to us, however, is that because of their own economic situation — and most likely that also of those in their social, business and donor circles, not to mention those of the lobbyists around them — most are not as attuned to the direct economic circumstances faced by the remaining 80% of Alaska families, and particularly those in the Lowest 40%, as they are their own.

To us that makes it even more important, as we suggested in our earlier column on this subject, that going forward the Legislature publicly and transparently shows the distributional and economic impact of each of the various fiscal options it is considering.

“Publicly and transparently” are the keywords here.

As we said in the earlier column, “we believe the reason the legislature and administration haven’t published any further analyses, not to mention separate ones for each revenue proposal as is common at the federal level and in other states, is because they don’t want to make obvious the impacts on Alaska families and the Alaska economy of what is being considered.”

The charts above make those impacts abundantly clear — whether intentional or not, legislators are adopting fiscal measures that, in the aggregate, directly favor the majority of their own economic interests (as well as those in their social, business and donor circles, and lobbyists) over the economic interests of those in the income brackets covering the remaining 80% of Alaska families.

Going forward, that should be clear and transparent on the public record so that all Alaskans understand the result, not only legislators huddled in the back rooms behind closed doors.

The point of our column is that “the Legislature [should] publicly and transparently show the distributional and economic impact of each of the various fiscal options it is considering.” Doing so would hi-lite that, using PFD cuts, the burden is being shifted to middle & lower income Alaska families (by a legislature that is predominantly in the Top 20%, and directly benefiting from such an approach).

Both Republicans (in the Senate) and Democrats (in the House) chair committees that could include such testimony as part of the record when considering various fiscal options. NEITHER has.

Bullshit. I can read and decide for myself what the point of any essay is. Don’t need the author to tell me. When legislators discuss revenue bills, someone–a legislator or a testifier–always points out how PFD cuts hurt low-income Alaskans more, and an income tax hurts high-income Alaskans (and Outsiders who earn here). It’s no secret, and it’s obvious. On almost no topic is it appropriate for a legislator or the legislature as a whole to say how a bill would affect them personally. “I support stiffening penalties for car theft so that my car is safer.” House members represent… Read more »

Man. Keithley touched a nerve. With verbiage such as “to us” and “we believe”, this is clearly an opinion piece. It doesn’t purport to be reportage. Those of us who plan to stay here and are hoping our kids will do the same are deeply concerned about Alaska’s fiscal future. This guy has decades of expertise under his belt. I personally appreciate his willingness to share and engage, even though I don’t always agree with him. He merely observed that “most [legislators] are not as attuned to the direct economic circumstances faced by. . .80% of Alaska families, and particularly… Read more »

No, he didn’t merely observe that most legislators are not attuned. He implied that legislators intentionally protect their own pocketbooks: “This is not necessarily to say that, over the past six years, the Legislature intentionally…” Not necessarily. “Not coincidentally, those two options — PFD cuts and sales taxes — appear to be the two most favored by most legislators.” Not coincidentally. “…because they don’t want to make obvious the impacts on Alaska families and the Alaska economy…” Hiding impacts = intention. That’s accusing legislators of chicanery, not merely being out of tune with Alaskans in the lower economic strata. “…whether… Read more »

Who is “our” in “our column”? Byline says you wrote it yourself. Collective adjectives are for royalty. And it’s “highlight.”

At the end of the piece:

“Brad Keithley is the Managing Director of Alaskans for Sustainable Budgets, a project focused on developing and advocating for economically robust and durable state fiscal policies.”

Okay, but Alaskans for Sustainable Budgets is not the byline for the article. Brad Keithley is the byline, thus “I believe” is appropriate. Using the royal “we” is arrogant.