What a week this has been for politics in Alaska! The June 1 candidate filing deadline has come and gone. As expected, there were some big developments. The major ones being Mark Begich and Mead Treadwell deciding to run for governor, and Governor Bill Walker announcing he will run as a petition candidate instead of in the Democratic primary.

Both Begich and Treadwell waited right until the deadline to file. Rumors and speculation about Begich had been swirling for months. Rumors about Treadwell were more recent. Word is some establishment Republicans wanted him to run because they were unhappy with Mike Dunleavy. But we have to wonder how many voters they actually represent?

Here are some savage quotes about Begich and Treadwell. The first was overheard in Juneau. The second came from a Republican insider.

Several sources confirmed that Begich had called several prominent Native women all over the state asking them to run for lieutenant governor in the Democratic primary. Word is most of them said no because they like Byron Mallott and do not want to create a divide among Native Alaskans. He may have even asked a Republican! This is what happens when you wait until the last minute. Many Democrats were not happy when they learned about this.

At the last minute, Debra Call announced she was running. KTUU reported, “Debra Call, an Alaska Native tribal official, told KTUU Friday that she was called on Thursday by Begich, who asked her if she would run with him as his lieutenant governor. She said yes.”

That must be like finding out your prom date asked ten girls before he asked you. #Awkward

Stay tuned for Landmine coverage on the governor’s race. It’s going to be an entertaining summer and fall in Alaska for Landmine readers! Let the games begin.

WTF is happening in District 9? Representative George Rauscher (R – Sutton) switched from running for the senate back to his house seat. Then former Representative Jim Colver jumps in the Republican primary last minute, along with Vicki Wallner and Pam Goode. But the best part is James Squyres also filed to run as a Republican, but by petition. Squyres and Goode are married. YES! I guess the plan is if Goode wins the primary, Squyres will take one for the team and pull out…

District 20 also has some drama. Last month, Representative Les Gara (D – Anchorage) announced in a “modest” Facebook post that he was probably not running for re-election (I would post it but it would take up a LOT of space). The caveat was someone had to run who he felt represented the values of the district. Kingmaker anyone? Soon after his announcement, Zack Fields and Elias Rojas filed to run. Many Democrats assumed Gara was going to support Fields. In an email after he announced he was running, Fields included the following: 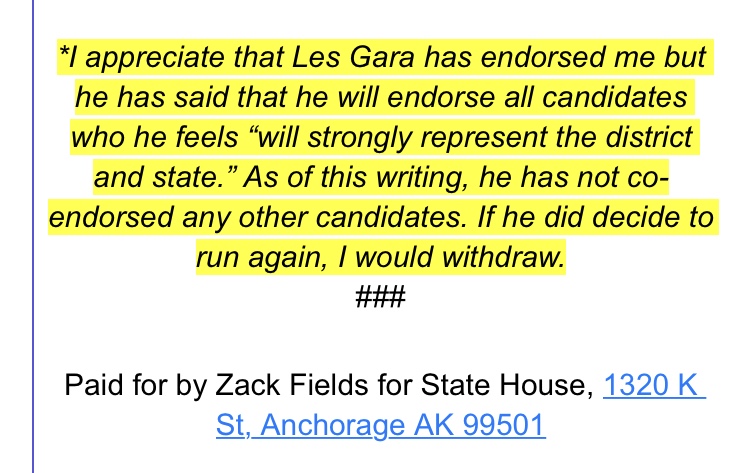 Gara can’t seem to let go because he decided to file and run after all! I guess this means Fields is withdrawing. Bye-bye, Zack. Democrat Cliff Groh also filed to run. It’s definitely going to get weird in Downtown Anchorage this summer. Lesson to incumbents – when you say you probably aren’t running, people are going to assume you aren’t.

Word is Gara was trying to recruit Mary Tesche, daughter of former Anchorage Assemblyman Alan Tesche, to run for the seat. Talk about high energy! Sounds like she may have considered it but ultimately decided against it.

You may recall this Landmine article from May 15, “Wanted: Primary Opponent for Charisse Millett”

Update – Found: Primary Opponent for Charisse Millett! Josh Revak filed to run against her in the Republican primary. Revak is a combat vet and Purple Heart recipient. He worked on veterans issues for Senator Dan Sullivan (R – Alaska). Word is he is already getting lots of support. The chickens are coming home to roost, Charisse.

The Alaska Landmine will be doing a full breakdown of the legislative races tomorrow, June 4, at 6 pm on Facebook live. Tune in to hear from an awesome panel! 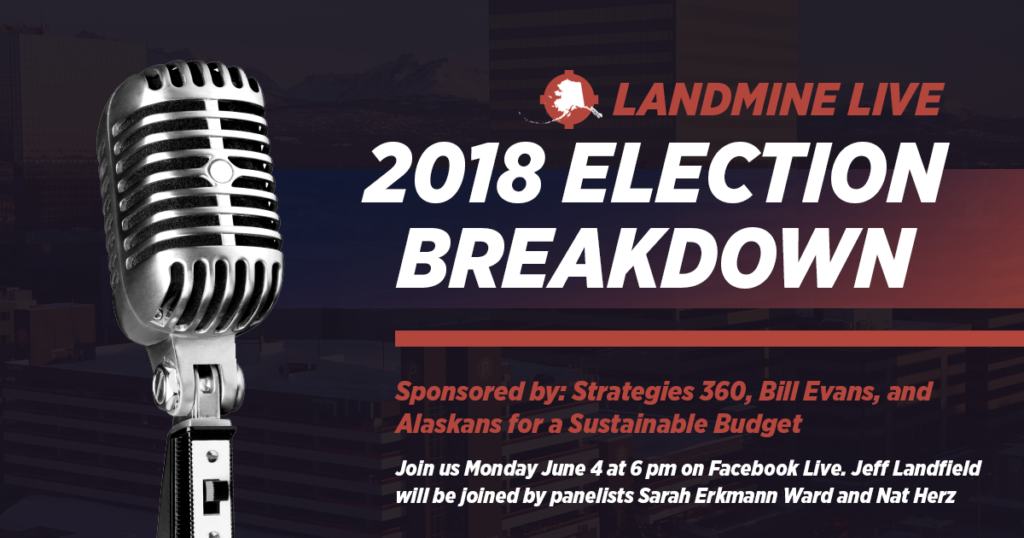 The Alaska Oil and Gas Association held their annual conference on Thursday (5/31/2018). As long as the price of oil stays above $70 a barrel, things should really pick up this year. During Senator Lisa Murkowski’s (R – Alaska) address to the conference, she spoke about the success of opening ANWR for oil exploration. The whole room clapped, including Representative Geran Tarr (D – Anchorage). I saw it with my own eyes. Some definite Twilight Zone shit right there. Murkowski ended by doing a little hula hoop. She killed it!

The event also included a gubernatorial debate. Candidates present were Mike Dunleavy, Scott Hawkins, and Bill Walker. The moderator, Andrew Jensen, had some weird criteria for the order of answering questions. They included oldest to youngest (You’re first Governor Walker!), tallest to shortest (guess who was first), and reverse alphabetical order. Bizarre. Representative Mike Chenault (R – Nikiski) was scheduled to attend but pulled out last minute. He later announced he was dropping out of the race.

Dunleavy and Hawkins went after Walker and Walker went after Dunleavy. Sorry, Scott. Walker did well considering the not so friendly crowd. Dunleavy came across as a bit smug and condescending, which is odd because he is very friendly and personable. He needs to work on that. There was a poll that people could vote in by texting a name to a number provided. But when it was displayed on the screen it was so small most people could not see it. #TechFail. It looked like Dunleavy and Walker were close, and Hawkins had very few votes.

One more thing, the hashtag for the event was, oddly, #OGalaska. Not sure who came up with that but it was definitely the talk of the conference. For all those OGs out there, respect.

Sara Rasmussen, Republican candidate for District 22, recently had a baby. Congrats to her. She posted this pic encouraging people to like her State House page. A political insider said, “This may qualify as the strangest political photo ever.” I wonder what demographic she is targeting with this one? 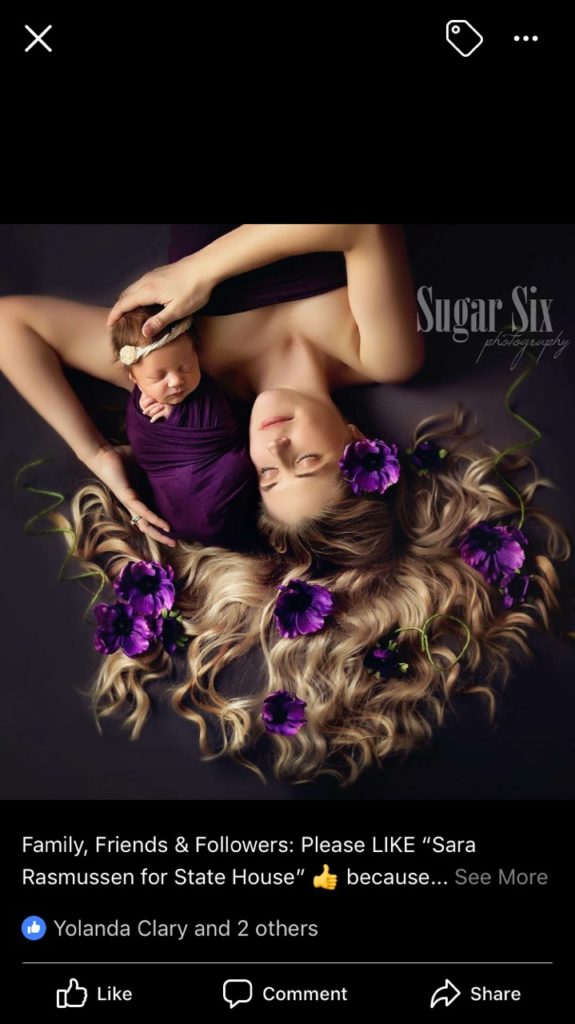 I wonder who manages the Facebook page for the radio station 650 KENI? Check out this response to a comment on an article they posted about Roseanne being cancelled. Yikes. 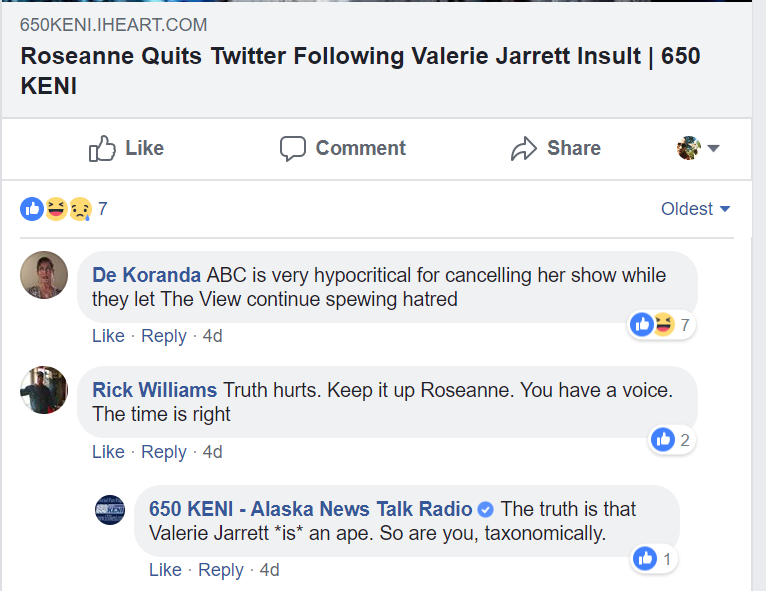 Some guy, Eugene Harnett, is running for the seat Representative Lora Reinbold (R – Eagle River) is vacating to run for the senate. He put “Make Alaska Great Again” on a campaign graphic. Eugene, it’s been used buddy. Andrew Halcro summarized it best. 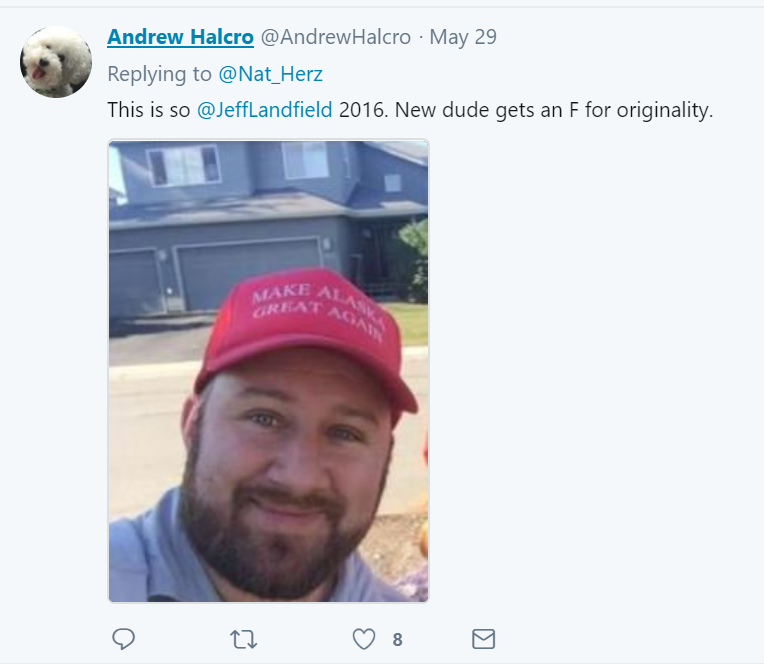 An unconfirmed report says that a contractor laying fiber optic cable on the North Slope for Quintillion and GCI did some MAJOR damage to the tundra. Like hundreds of miles of damage. The complete extent won’t be known until the snow melts, but it doesn’t look good. So far there have been no media reports – but imagine if it was an oil company that did it.

This week saw the highest number of potential Loose Units since we started awarding it. Maybe we should start a daily Loose Unit during campaign season. After careful thought, this week is a three-way tie between Bill Walker, Mead Treadwell, and Mark Begich.

Let’s start with Walker. In early May, Walker announced that he would run as an Independent in the Democratic primary. But once Begich decided to get into the race, the campaign changed their mind and Walker then announced that he was running as an Independent by petition. This ensures it will be a three-way race for governor. Classic Loose Unit move.

Then Mead Treadwell accidentally launched his campaign website before he officially filed to run for governor. After a Landmine story that he was running went up, the site was taken down. He then told KTUU, “I asked for help on getting under construction to be sure we could be ready. Maybe something went live prematurely.” The term premature election comes to mind. He eventually got his paperwork filed, but what a Loose Unit.

And then there is Mark Begich. Begich has a history of waiting until the last minute to file to run for office. But the issue over who will run for lieutenant governor is what earns him the Loose Unit designation this week. Calling potential candidates the week of the filing deadline, and even the day before. Classic Loose Unit move.

You must have attended a different event from me. Walker embarrassed himself by not being able to put a complete sentence together. Everyone I spoke with said Dunleavy was the clear victor. And that Walker came in dead last. Your spin does not change things.