It’s almost July and a budget has still not been sent to Governor Mike Dunleavy (R – Alaska). The Legislature came back into a second special session this week, though not much has transpired. There is cautious optimism that some kind of deal will be reached tomorrow. Anchorage Mayor-elect Dave Bronson will take office on July 1. Next Sunday is July 4! I hope the weather is good and everyone has a good time.

A friendly message and reminder to all our readers, the Landmine is made possible by myself and a team of awesome Alaskans. It takes a lot of work to provide the content we do. I am back in Juneau this week for yet another special session. If you enjoy the content we provide, please consider making a one time or recurring monthly donation. You can click here to donate. We have a donation system that makes it super easy. We would really appreciate it. And thanks to everyone who has been supportive!

The second special session, called by Governor Dunleavy, started this week. This one stems from the House not passing the effective date for the budget. It got 23 votes, but needed 27. Because the House failed to get the 2/3 needed for a July 1 effective date, the budget will not be effective for 90 days per the Alaska Constitution. Some argue Dunleavy could sign it and a shutdown would not be needed, but he is the one who ultimately decides. And the Legislature has not yet transmitted the budget to him. It needs to be signed by Thursday (July 1) to avoid a government shutdown. The budget has already been engrossed and enrolled, meaning it is ready for transmittal. Dunleavy would still need to decide on any vetoes, but his team likely already reviewed the budget and knows what they want to do.

Because the budget is the result of a conference committee, it cannot be changed. So, if a shutdown is going to be averted, the House will need to rescind action on the previous effective date vote (the budget passed both bodies and the Senate passed the effective date clause) and re-vote to pass it. On Friday, Speaker Louise Stutes (R – Kodiak) and Minority Leader Cathy Tilton (R – Wasilla) both said they were optimistic a deal would be reached by Monday, but said a deal had not been reached at that point. At this point I would say there is probably a 70% chance they reach a deal. If a deal is reached it will involve the August special session. The Republican House minority is in a good place to get concessions because the other big issue is the 3/4 vote for the reverse sweep, additional dividend, and capital projects. This is expected to be dealt with in August. One thing mentioned about a potential deal is a Sense of the House where the agreement for August will be on the record. There is not a lot of trust in Juneau. If a deal is not reached by the end of the day tomorrow, and the House does not pass the effective date, the odds of a government shutdown will be much higher.

If you spend any time on Facebook or Twitter, you have probably noticed Dave Stieren and Todd Smoldon posting increasingly weird takes. They both work for Governor Dunleavy. The posts range from insulting Dunleavy’s base to insulting legislators, and lately insulting Scott Kendall. It’s pretty loose. Here is a recent one where Stieren refers to Scott Kendall as a “soy boy.” I’m dying. 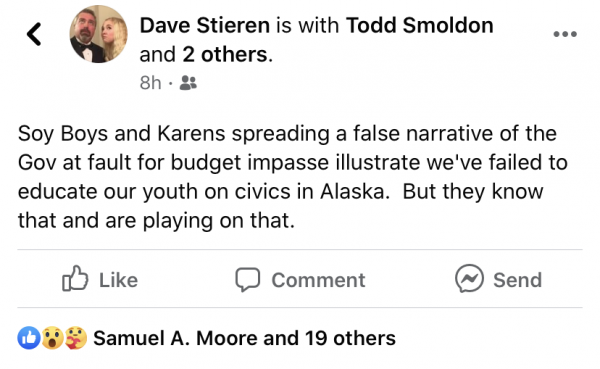 Anchorage Mayor-elect Dave Bronson is set to take office on July 1. Bronson will be holding a press conference tomorrow to announce the rest of his team, including the municipal manager.

Margaret Stock, an Anchorage based immigration attorney who specializes in military immigration law, testified before the Senate Subcommittee on Immigration, Citizenship, and Border Safety this week in Washington D.C. You can watch her testimony here. It is very compelling.

Former Alaska Senator Mike Gravel passed away yesterday. Gravel served in the U.S. Senate from 1969-1981. He played a big part in getting the Trans-Alaska Pipeline approved. He gained national attention when he read the Pentagon Papers into the record. He also served in the Alaska Legislature and was Speaker of the House before he was elected to the Senate. If you read up on him you will see what a character he was. I connected with him last year and was supposed to fly down to California and do a series of podcasts with him, but we had to cancel because of COVID. I spoke with him many times on the phone. He was sharp and witty. I really wish we could have done those podcasts.

This is not the first time Tarr has gone off on her colleagues. She was the Loose Unit on February 21 after the wild letter she sent to Speaker Stutes about leaving the caucus, which she later rejoined. Just like when she made a post before the budget vote saying the budget “perpetuates systems racism.” She then voted for the budget she called racist. Classic Loose Unit. She also said she would continue to wear a mask after the mask mandate in the Capitol was lifted, but she stopped doing that too. Point is you really can’t trust what she says. But this recent post is another level of loose. Suzanne Downing used it to attack Fields and try and and break up the fragile House majority. Tarr either doesn’t understand or doesn’t care about the ridiculous woe is me nonsense she posts. And calling me a misogynist. How original! That meeting with Stutes did happen and it was absolutely bizarre. Tarr was sitting on a couch and had some kind of security blanket. At one point she got mad and called me a bigot! It’s amazing she has managed to be elected since 2013.

You failed to address her allegations: DID Fields and/or yourself attribute her stance to her failure to secure a committee chair, an assumption she denied (and I believe her, despite wishing she would toss the hyperbole, a wish which extends to pretty much all public officials.)

I think the better question is: if she didn’t quit the majority because the sole resources chair was given to the rep from district 40; then what committee did she quit the majority over? I’ve still seen nothing that would imply it wasn’t the situation Fields and Landfield suggested… she’s the one who made that a public issue and tried to flame shame the majority over it in February, even denying them the majority. Do you have a better explanation for Tarr’s public attempt to leverage the majority’s narrow margin during organization? I missed it if she or anyone else… Read more »

Your resultant inference is reasonable, but far from conclusive. Give me a list of our state legislators who act at least close to a normal person, truly what you’d call a short list.

She called you a misogynist because you ARE one, Jeff. You are the Loose Unit.

Have you ever seen Jeff and Ivanna Kisacok in the same room together. Just
asking for a friend.
.