The budget SNAFU in Juneau

The best was to describe the current situation with the budget in Juneau is SNAFU. On Wednesday the Senate passed Governor Mike Dunleavy’s (R – Alaska) supplemental budget 16-0. They also voted 16-0 to draw from the Constitutional Budget Reserve (CBR), which requires a 3/4 vote or 15 votes in the Senate, to fully fund the bill.

The House had previously passed the supplemental budget on February 26, 35-2. The Senate version added $61 million that included money for COVID-19 and community assistance. They also added the reverse sweep, which would prevent several funds getting swept into the Constitutional Budget Reserve on July 1.

Because the Senate was sending the bill back to the House, the House could only vote to concur or not. If they failed to concur the bill would go to a conference committee. On Wednesday the House voted 28-10 to concur with the changes the Senate made, but failed to reach the 30 vote threshold to draw from the CBR and reverse the sweep. That vote was also 28-10. Those two votes can be seen below. 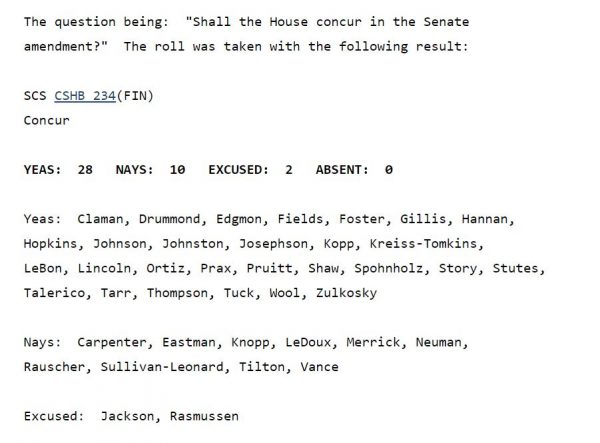 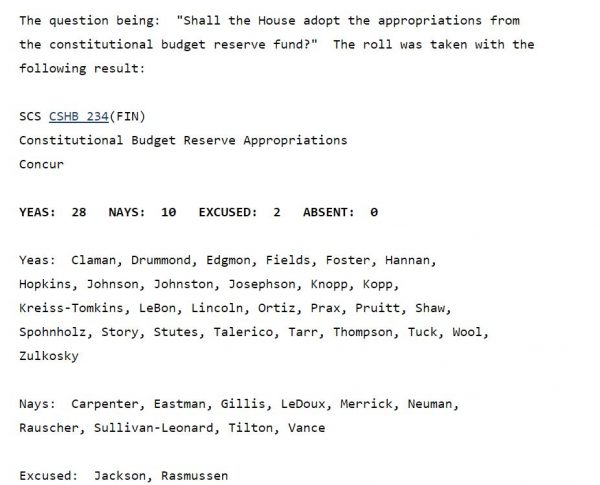 Let me break this all down. Shout out to to all the staffers who helped me understand all of this. The supplemental budget totals around $612 million. $359 of this comes from the state general fund. The rest is federal match. It pays for things like the fires last summer (around $110 million), Medicaid (around $140 million), and COVID-19 (around $20 million). $250 from the CBR is already funded because last session the legislature passed something called head room, which sets aside money in case it is needed for emergencies. This leaves an additional $109 million that would need to be funded from the CBR draw, which failed in the House.

Because the House voted to concur with the changes, but did not vote to draw from the CBR, the supplemental budget is only partially funded. This creates a weird situation. The House has one opportunity to rescind the action on the 3/4 vote and try again, but gathering from conversations I have had and what I am hearing in the building, it seems unlikely they have the 30 required votes.

It’s not clear what happens if things stay as they are. I assumed the partially funded bill would then go to the governor to be signed. It’s not clear how it would be decided what parts would be funded and what parts would not. I have asked the House Clerk’s Office, the House Rules Office, the Speaker’s Office, and several staffers. No one seems to know exactly what will happen. Here are some scenarios I came up with by talking to someone who is an expert on all this (you know who you are):

Governor Dunleavy met with the members of the Republican House Minority on Wednesday before the vote. They were in his conference room on the third floor of the Capitol, he was on video conference. He told them a big vote was coming up. He told them he did not want to tell them how to vote but hoped they would do the right thing. Several sources confirmed that Dunleavy told multiple legislators he hoped the bill would get 60 votes, which is every legislator.

During the meeting, sources reported that House Minority Leader Lance Pruitt (R – Anchorage) and Representative DeLena Johnson (R – Palmer) stepped out to have a private conversation with Dunleavy. Interestingly enough, Pruitt and Johnson, along with Representatives Laddie Shaw (R – Anchorage) and Mike Prax (R – North Pole), voted to draw from the CBR and reverse the sweep.

Pruitt gets to have it both ways. He can say he voted for the CBR draw and reverse sweep and he can also say his caucus stopped that from happening. It’s becoming clear that some members of the House Minority don’t want to fund the supplemental budget and reverse the sweep for one or any combination of these reasons:

Something else to consider. If everyone is forced to quickly leave the Capitol because of COVID-19 and the reverse sweep vote does not happen, there could be a repeat of what happened last year. Last year the legislature failed to reverse the sweep and multiple funds that include the Power Cost Equalization fund and the Alaska Performance Scholarship fund were swept. They eventually did a reverse sweep in August. But waiting until after July 1, the beginning of the new fiscal year, created an accounting nightmare. If things got loose and everyone had to leave they could call a special session in May or June to deal with all the unfinished business. But that would be in the middle of election season and who knows what things will look like then with this COVID-19 situation.

Here is a list of all the funds that were swept last year. 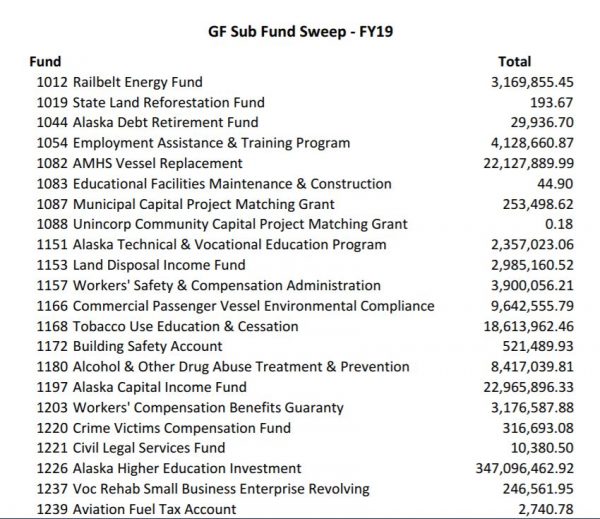 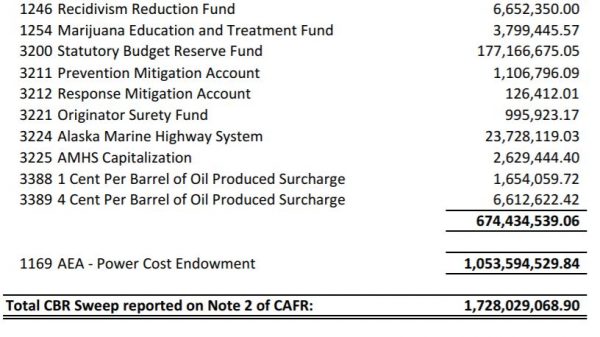 Both sides are saying the other is playing games. This is not entirely untrue. The Senate added the COVID-19 funding and reverse sweep to the supplemental budget, probably to try and force the House’s hand. However, there is also a sense of urgency from many legislators to get that done quickly. Some House Republicans say the Senate adding the reverse sweep in the bill takes away their leverage when the operating budget comes up. It’s possible another 3/4 CBR vote would be needed anyway for the operating budget. The spring revenue forecast has not come out yet. With Alaska North Slope Crude below $27/barrel, the revenue forecast is sure to paint a dismal picture. Revenue has not returned my call about when the forecast will come out. It is normally out by now.

At this point it’s unclear if FY2020’s budget, which is the current budget, will be updated to reflect the drop in oil prices. That budget is currently based on the fall 2019 revenue forecast. It appears the legislature is also using the fall 2019 revenue forecast for the FY2021 budget. However, Senator Bert Stedman (R – Sitka) just said they have updated their numbers to reflect $40 oil. This is important because the numbers they use determine what the projected deficit is. There was $1.8 billion in the CBR at the end of FY2019.

Members of the House and Senate Majority have criticised House Republicans about not funding the supplemental budget and reversing the sweep. Senator Stedman said today, “I hope the House Minority realizes that playing politics with the lives of Alaskans is not what they were elected to do.”

Keep in mind all of this so far is just over the supplemental budget. The operating budget is where it will likely get really loose. Senator Stedman told me it is his intention to have the Senate Finance Committee hold a hearing on the operating budget this afternoon or tomorrow, depending on when the drafters finish it.

As I was writing this Governor Dunleavy held a press conference on his economic plan due to COVID-19. He asked the legislature to approve $1,300 to every Alaskan for last year’s reduced PFD. That would require an $811 million draw from the Earnings Reserve.

The Permanent Fund has lost almost $8 billion in value since last June. This is due to the recent market crash. When you factor in the $3.1 billion POMV draw for next year, the $4 billion transfer to the principal, and inflation proofing, the Earnings Reserve will only have around $7.9 billion available on July 2, 2020. That is assuming the markets stay where they are now. They could go up, or down. Anyone who is saying there is plenty of money in the Earnings Reserve to pay a mega-PFD is either not informed or practices voodoo economics. The legislature could undo the $4 billion transfer to the principal, but that’s unlikely. When I asked Senator Stedman today if there were any chance the transfer would be stopped he responded, “Absolutely not.”

There is talk about some members going home for the weekend. Who knows where things will be on Monday. The news about COVID-19 seems to be changing by the hour. The legislature has also been holding regular committee meetings for benign bills and confirmation hearings. Both the House and Senate have been debating and voting on bills for things like railbelt utilities and physical occupational licensing. If the public was not closed to the Capitol, you would not know anything was out of the ordinary.

It’s anyone’s guess where things will be next week. When I asked Stedman if there has been any talk about revenue options he said, “We plan on passing the operating budget and the capital budget and leaving town. It’s up to the House Minority if they want to go along with that.”

The story has been updated to show the Earnings Reserve will have around $7.9 billion available on July 2, 2020, not $5 billion. The $2.9 billion POMV transfer for the current fiscal year already happened.