A Department of Public Safety report dated 10/21/1995 shows that Al Gross and his hunting partner, Jeff Jones, both shot and killed a bear that snuck up on them. The report was obtained by the Landmine through a public records request. According to the report, that was filled out by Jones, he heard a “blood curdling scream” from Gross followed by “bear.”

Here is the description from Jones in the report: 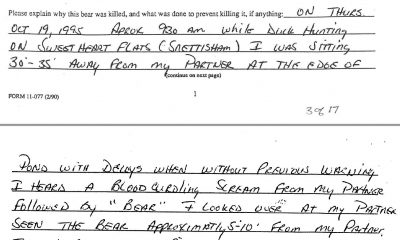 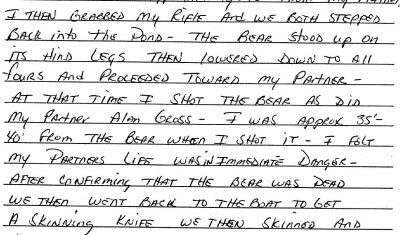 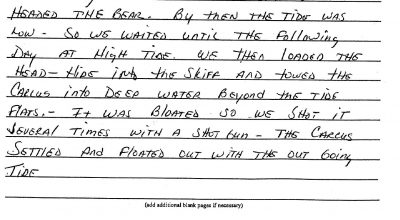 You can view the entire report here.

Gross has highlighted his killing of a bear in several campaign videos and commercials. He never stated he was with someone else.

Julia Savel, Gross’ Communications Director, provided the following statement to the Landmine when asked about the report:

Instead of doing anything to extend COVID relief, lower the costs of prescription drugs, or make healthcare affordable for Alaskans, Dan Sullivan instead is focusing on a 25 year old hunting trip. Dan Sullivan is just admitting to Alaskans that he has no plan to deliver results for Alaskan families at a critical time for the state and country. What a shame.

Al killed the bear in self defense, reported the incident and the case was closed. Believe me, if Dan Sullivan came across that bear in 1995 he would have been back at his parents’ mansion in Ohio quicker than he could say “department of public safety.”

The Gross campaign’s statement is a joke and so is the person who wrote it. In October 1995, Dan Sullivan was stationed at Camp Pendleton preparing for a six-month deployment to the Asia Pacific as an active duty Marine Corps infantry officer in the 31st Marine Expeditionary Unit.

As for the bear, I’m not surprised the Anchorage Daily News and other news organizations began looking into this now questionable story. Al Gross has told tall tales for years and they’re finally beginning to catch up with him.

OK, this confirms that Gross was there and a bear was shot. Was there a necropsy to determine the “fatal round”? Did either Gross or his partner miss? In any event, how exactly is this relevant to issues facing Alaskans and who exactly is the “Landmine Staff” who wrote this? Is it Matt Shuckerow,?

Because “ Al Gross has been lying for years”.
That is a fact.

And the name on the hide sealing certificate is also that of Jeff Jones.

Mabye Al should request another commercial from his “Down South contributors with a redaction saying “ “Shot at a bear, bus missed“.. which sums up his campaign so far.

Another in-depth reporting piece from Landfield to distract you from the issues at hand. This time coordinated with Downing and Medred for maximum looseness.

All I know is that Gross’s annoying YouTube ads with the “Bear Doctor” jingle are ridiculous. With that phrase, is he claiming to be a veterinarian? Gross is a joke, with fists full of cash from Democrat supporters to pay for these barrages of annoying commercials. The dude lost his board certification for medical malpractice. Is that really who you want representing you in DC? Yikes.

Gross’s board certification is current through 2027.

His Alaska medical license has been in force without interruption since June of 1994, with no “Agreements/Actions/Accusations”.

The medical malpractice we’re all aware of is the only one that’s been brought against him.

It took me less than 5 minutes to find this information from primary sources. It took MRAK less than 3 minutes to delete It when I posted it in the comments on Downing’s specious article about Gross’s role in an opioid epidemic in Juneau.