In February, the Landmine published a story about how Andy Baker, working as an unregistered lobbyist, helped secure a $1 million state appropriation for Voice of the Arctic Iñupiat, a non-profit corporation based in Point Hope, Alaska. Not long after the story was published, the board of Voice of the Arctic met and unanimously voted to fire all the staff.

Governor Mike Dunleavy (R – Alaska) requested the $1 million capital appropriation from the Legislature last May as part of his “statehood defense initiative,” an effort to push back against policies of the Biden administration. He requested $9 million in total for the initiative. The Legislature ended up approving $4.75 million, which included the $1 million for Voice of the Arctic. Strangely, few lawmakers seem to have heard of Voice of the Arctic and even fewer could explain what the organization does.

Dunleavy requested an additional $1 million appropriation in this year’s capital budget, but it was removed by the Senate Finance Committee. This budget document from the Dunleavy administration lays out what the money is supposed to be used for.

None of the requests describe what the money was supposed to be for. To date, no money has been dispersed to Voice of the Arctic from the state.

The $24,000 supplement request to Baker was signed by John Hopson Jr., who was president of Voice of the Arctic until the board fired all staff on February 11. Teresa Imm signed the main request, which the supplement showed paid her $12,000. 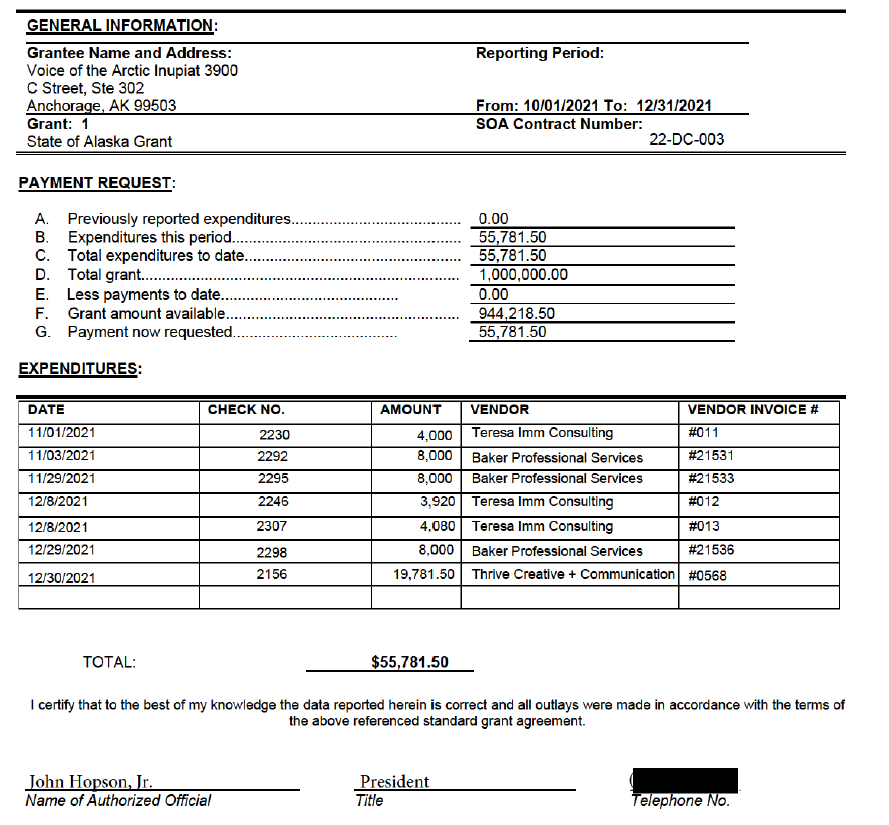 Voice of the Arctic’s 2018 IRS form 990 shows Thrive Creative + Communications was paid more than $143,000. Hopson was not president at that time.

Andy Baker, who maintains an office in the Rainbow Foods building in Juneau – which is often referred to as the “Rainbow Swamp” due to the number of lobbyists who have offices there – would not comment for the original story. Baker, working as an unregistered lobbyist, helped secure the $1 million appropriation. The reimbursement request includes three lines for $8,000 to his company, totaling $24,000 for the period of November 3, 2021 – December 29, 2021. It does not list what work he performed.

The records request included two reimbursement requests, one dated January 31, 2022 and one dated February 3, 2022. The first, signed by Teresa Imm, matches the amount in the above supplement for Baker, Imm, and Thrive. Another document, signed by John Hopson Jr., requests an additional $56,184. However, no request supplement was provided in the records request, so it is not clear what that money was for.

Dunleavy co-authored an op-ed with Hopson which appeared in the Washington Examiner in November. Voice of the Arctic’s last Facebook post was on February 8. It’s not clear what they have done since receiving the $1 million appropriation from the state or what the money to Baker, Imm, and Thrive was for.

Several years ago, with $500 of my own money, I protested an upcoming municipality initiative that was to be put on the ballot that fall. I was the only “member”. I received a threatening letter from APOC stating that I must register as a lobbyist!!! To say I was shocked would be a gross understatement. Even after explaining my “one man band”, I was forced to register or face their legal consequences. Guess they only monitor the little people….