Matt Hickman Doubles Down on Dumb

It’s sad that the Anchorage Press has become such a rag. They used to provide good alternative content. Now, they think they are a real newspaper. Matt Hickman published an article yesterday titled, ‘Prometheus’ exists. Journalists must find out who he is, where he doubled down on dumb.

He starts with a quote from an anonymous letter sent to the Alaska Republican Party, and others, back in August.

Because investigative journalism is something of a rarity in this state — and certainly out in the Valley — it is difficult to piece together a cogent narrative, but after multiple contacts with various residents in the Valley, these details appear to be uncontested.” — Anonymous

He goes on to say:

It’s important to note that the letter-writer was not politically opposed to Dunleavy. Quite to the contrary, he was concerned that Dunleavy opponents — particularly late-arriving Democratic candidate Mark Begich — would go to any length to expose this rumor, and that the party should at least look into these matters before backing him wholeheartedly.

How the hell does he know who the author is opposed to? He admittedly states the letter is from an anonymous person. In fact, the likely origin of the letter is someone from Mead Treadwell’s campaign or a Mead supporter. The letter also stated, “The primary is 11 days away.” It is clear the letter was designed to impact the primary election. Now Matt, I know this kind of stuff requires a rudimentary understanding of Alaska politics and basic skills of analysis and comprehension, so I can see why you are confused. This stuff is a bit more complex than beer and weed.

He goes on to talk about the woman Dunleavy allegedly had an affair with. He again admits she said she did not have an affair with Dunleavy, but he still felt it is worth writing about. Here comes the best part. He wrote:

Then on Friday, mudslinging political blogger Jeff Landfield of the Alaska Landmine — probably fuming that we beat him to the story he wanted so badly to break — lashed out at me, personally, in a blog post titled, ‘Matt Hickman and Bernadette Wilson Peddle Untrue and Salacious Rumors About Mike Dunleavy.

He sent me this message after my article came out on Friday. Here is how serious I take this guy:

As I wrote in that piece, I learned about this rumor back in August. This rumor was widely known in political circles. I reviewed the divorce file with a lawyer friend and found no mention of Dunleavy. Matt, what story do you think you beat me to? If I desired to write about nonsense like you, I would have done it two months ago.

Next, he goes on to show just how clueless he is. He wrote:

Need I remind Jeff about ‘Upskirt-gate’, the completely bullshit rumor about Sen. David Wilson (R-Wasilla) that he fomented and was completely disproven by conclusive video evidence?

Completely bullshit? First, there were several witnesses to what Wilson did, including KTVA reporter Liz Raines. Second, an investigation by the Legislative Affairs Agency found he acted inappropriately and put the staffer in a “no win situation.” Third, did you see the tape, Matt? The answer is no. The tape was never released to the public. A total of five people have seen it. Four, Wilson was disciplined for retaliation after a bizarre press conference he held, that he was told not to. I’m not surprised Hickman brought up Wilson. Loose Units stick together. And finally, media outlets like KTUU, KTVA, the Juneau Empire, and Alaska Public Media all covered this. In Matt’s world the Anchorage Press is the only real news source in Alaska.

He also referenced a blog post I made back in March where I posted and commented on a picture of David Wilson, Terre Gales, and Marcus Sanders at the Alaska Republican Party state convention. He wrote:

Or how about his Alaska Landmine post with a photo of Sen. Wilson and two other African-American gentlemen at a Dunleavy fundraiser at Fat Ptarmigan which he captioned: ‘Public service announcement to Republicans — These are all different people. #MindBlown’? Ah, yes, Jeff, you are the paragon of virtue, the model to which all journalists should aspire.

Matt, I realize you struggle understanding politics but I did not realize you also have a hard time understand humor. The post was clearly aimed at Republicans, many of whom had confused Terre Gales with David Wilson. I guess Matt is not aware of cross-race bias. He must be a real hoot at parties.

He then goes on to talk about the ridiculous Prometheus rumor he is obsessed with. I wrote about this to point out how absurd it was. He writes:

That is pretty close to the rough edges of the rumors we heard. But we didn’t report them because we are a real newspaper printed on real paper and real ink that is part of a real newspaper family that goes back more than 90 years; we’re not just some aberrant cackle in cyberspace. When we have particularly sensitive information we work with lawyers to make sure all our ducks are in a row, as I did on a painstaking and incredibly stressful Wednesday deadline.

Awww, Matt is stressed out because of a deadline.

Where to start. First, I’m not sure bragging about being a “real paper” with “real ink” is the best idea in 2018, especially when the Press has been losing money for years. Second, what lawyers is he referring to? He later states:

We at the Anchorage Press have no editorial staff other than me, and I double as general manager. We have a team of freelancers who write mostly about the arts, bands, beer, weed, food, etc., and though we may lack in news reporting staff, we have very strong ties with the LGBT community.

I’m confused. Is he a solo operation with freelancers writing about beer and weed or does he have “lawyers” on staff ready to review his hard hitting investigative reporting? I think we all know the answer to that question.

He goes on to reference Alaska GOP mouthpiece, Suzanne Downing. Enough said about that.

Hickman goes on to state that Prometheus does exist:

Let me be very, very, very clear about this: we cannot report, nor do we want to insinuate that Mike Dunleavy, nor any other prominent public figure, is Prometheus. According to local sources, there is a Prometheus that has been active on the gay dating site Grindr, looking for ‘sugar babies’ and he is said to request discreteness due to his employment. We do not know who this person is. We are continuing to work as best as we can with what resources we have to find out the identity of this individual and when we have something concrete we will report it.

Is this guy for real? Is the Press now in the business of outing members of the gay community?

The fact that Hickman wrote such a ridiculous and stupid article says a lot about him. In fact, at an AFL-CIO press conference today he asked union boss, Vince Beltrami, about the Prometheus rumor. Yes, he did that. The best part was Beltrami’s initial response, “I’m sorry, you are?” This is the same response he got from Grace Jang when he asked a question at Governor Walker’s press conference last week.

Hickman is not the only clueless person at the Anchorage Press. Their publisher, Dennis Anderson is another beauty. Check out this post he made about Hickman’s Prometheus masterpiece. What I would give to sit in on one of their editorial meetings. I’m looking forward to the next time I see this guy. 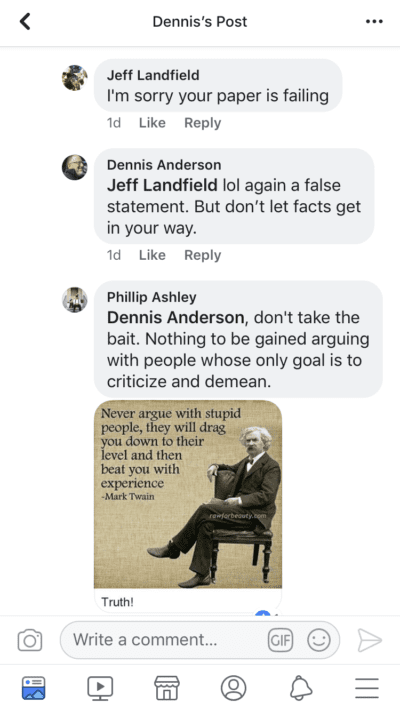 Matt and Dennis, as I already suggested, take my advice – the Press should stick to beer and weed and try and stop losing money. You sure aren’t going to get there by covering politics.

Don’t forget about Brendan Joel Kelley and his erratic coverage and departure. The Press has been an egofest for over a decade.