In a series of documents obtained by the Landmine, Angela Rodell told the Legislative Budget and Audit Committee (LB&A) she believes her recent removal as Permanent Fund CEO was for “political retribution for successfully carrying the Board’s mandate to protect the Fund and advocate against any additional draws over the POMV spending rule in front of the 30th, 31st and 32nd Alaska State Legislatures which is contrary to Governor Dunleavy’s agenda. It is this direct conflict of agendas that contradicts the statement made by Chair Richards to the Senate and House Rules on December 15, 2021 that ‘politics had no part in the [Board’s] decision.”

Rodell was unexpectedly terminated as CEO by the Board of Trustees on December 9, 2021. The unexplained move surprised many legislators and political observers.  After, Governor Mike Dunleavy (R – Alaska) claimed he had no prior knowledge of the decision even though two of his commissioners, Revenue Commissioner Lucinda Mahoney and Natural Resources Commissioner Corri Feige, make up a third of the six-member board. Mahoney has served as vice-chair since September 2021.

Rodell has said little publicly about her termination.

On December 27, 2021, Senator Natasha von Imhof (R – Anchorage), who chairs LB&A, sent a lengthy letter to Board Chair Craig Richards asking for an explanation as to why Rodell was terminated.

Another document includes a series of emails between Mahoney and Rodell in the days leading up to her termination. The emails were about a survey of staff and board members conducted for Rodell’s performance review. Rodell provided a chronology of events in her letter. Rodell says there was no discussion prior, during or after about her performance. 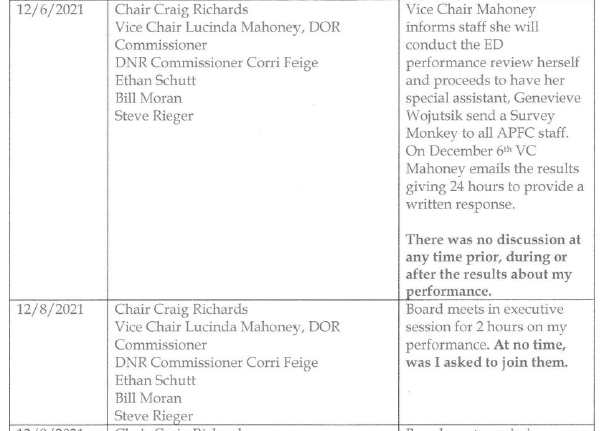 Another document, marked confidential, is Rodell’s performance evaluation based on the survey. The summary includes a mix of positive and negative reviews. You can see the full review here.

Rodell responded to the review on December 7, 2021. She was terminated by the board two days later. 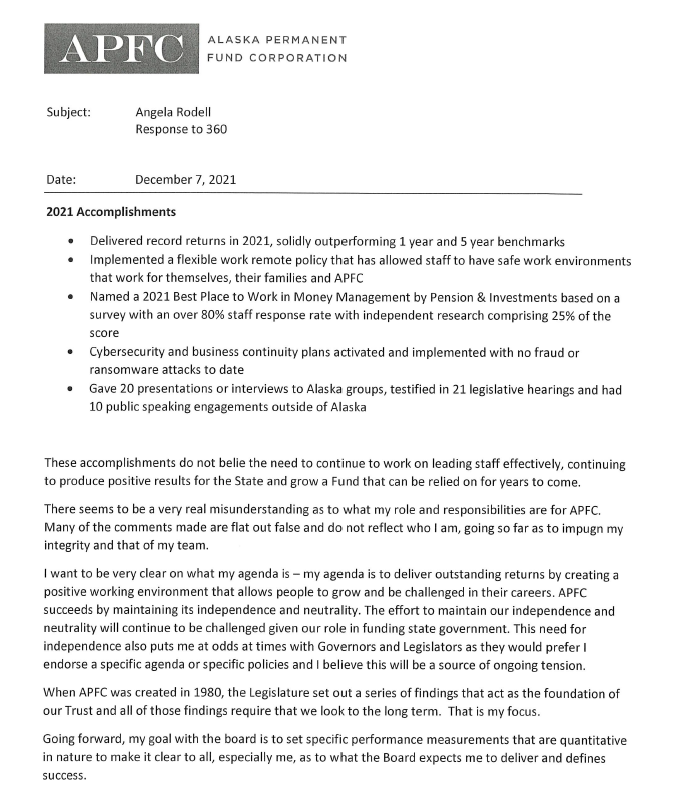 In the performance review, many comments from board members were critical. But in December 2020, one year prior to her termination, the board voted 5-0 at their annual meeting to give Rodell a significant salary raise. The unanimous vote approved a salary of $389,000. Note that Richards, Mahoney, Feige, Schutt, and Rieger – all of whom are still board members – voted for the raise. Her salary before this motion, set at a 2017 board meeting, was $325,000.

Look for this to be a major topic of the upcoming legislative session.

Weasel in and weasel out. There is no accountability these days. Louisiana = Alaska, or visa versa. The corruption in our government is breathtaking. A low watt governor and a low watt legislature. Seems to be de rigueur these days throughout.

If the Governor did not know that Rodell (the manager producing 70% of the state government’s income) was about to be fired, the Governor should be fired for incompetence.

How is this oaf and his appointees still allowed to hamfistedly dip into the Permanent Fund and wreak havoc in our state? Its obvious who is lying and continues to ignore their oaths of office.

Gawd almighty! Just how bad can it get under Dunleavy?

Very Typical Bureaucratic Process & Evaluation SIDE STEPPING RESPONSE!
Have we all witnessed this over & over again ? BLAH ,BLAH , BLAH.
This is the downside to lofty Appointed Positions without Public Official Bonds nailing down Malfeasance or Misfeasance accountability.
Please Alaskans demand new Law to make them all accountable to the People of the STATE!
Pass a Public Official Bond Requirement for them all, Elected & Appointed Officials Serving this GREAT STATE !