AIDEA/AEA under investigation for hostile work environment amid employee exodus

State of Alaska correspondence obtained by the Landmine confirms that the Alaska Industrial Development Industrial Authority (AIDEA) and the Alaska Energy Authority (AEA) are under investigation by the State of Alaska for what several former employees have called a “hostile work environment.” According to a March 19 letter from Kate Sheehan, director of personnel with Department of Administration, the investigation started last fall when an employee went to Commerce Commissioner Julie Anderson. The letter stated:

An aggrieved employee approached Commissioner Anderson in fall of 2020 to discuss concerns with workplace conduct. Commissioner Anderson consulted with the Department of Administration and the Department of Law, and a Human Resource Consultant was assigned to conduct an investigation of the allegations. That investigation is ongoing and it is being conducted under AS 39.28 and will be considered confidential in its entirety.

It has come to my attention that several AIDEA and AEA employees have made claims of a hostile work environment involving sustained verbal abuse and mistreatment at work. I have heard that complaints have been made to Commissioner Anderson about these concerns and those complaints have been referred to the Department of Administration’s human resources section for investigation.

AIDEA/AEA fall under the Department of Commerce, Community and Economic Development. According to the letter from Sheehan:

AIDEA employees are hired under the authority granted in AS 44.88.050(c) and all employees of AIDEA are in the exempt service under AS 39.25. Under this authority, AIDEA employs a Director of Human Resources. When employees are unable to achieve satisfactory resolution within the structure of AIDEA, complaints may be filed with the Commissioner of the Department of Commerce, Community, and Economic Development, the Division of Personnel within the Department of Administration, or the AIDEA board chair.

Several current and former AIDEA/AEA employees spoke to the Landmine, on the condition of anonymity, about problems with the workplace and culture. The alleged issues include questionable procurement decisions, verbal abuse, harassment, and preferential loans and loan forgiveness being given to companies connected to AIDEA board members and staff. One former employee said they witnessed an AIDEA executive throw a stapler at an employee during a staff meeting. Another said the list of people who signed the recall petition against Governor Mike Dunleavy (R – Alaska) is often checked before hiring someone or awarding a contract. Several of the employees reported that AIDEA/AEA human resources was either unable or unwilling to deal with these problems, which is why they went to Anderson.

Personnel investigations are treated as confidential to protect all the individuals involved in the complaint. The Dunleavy administration encourages any state employee who believes they have been subjected to workplace harassment or a hostile work environment to contact the Division of Personnel.

The investigation began almost six months ago. As of today, the Landmine has not been able to obtain any findings. In her letter, Sheehan stated the “investigation is ongoing and it is being conducted under AS 39.28 and will be considered confidential in its entirety.”

Information obtained through a records request from the Landmine shows that 18 AIDEA/AEA employees have left since July 1, 2020, over 20% of the workforce. The list includes several senior positions. 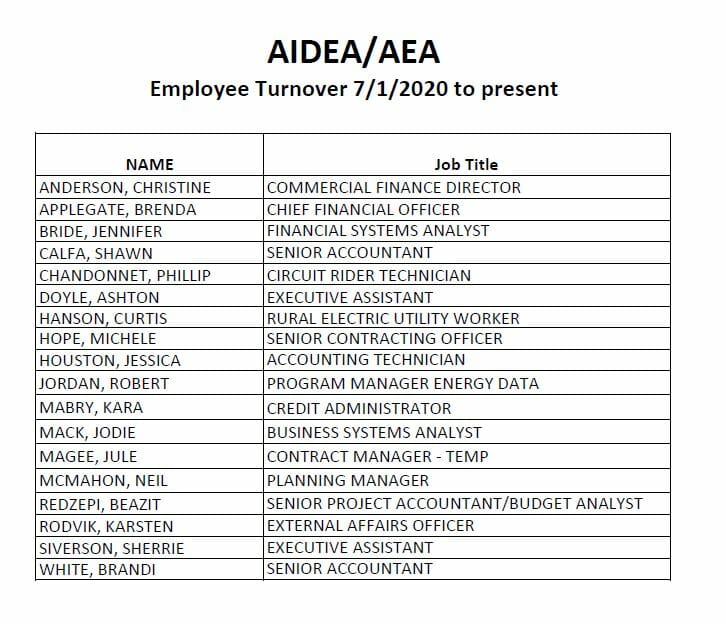 The most recent AIDEA/AEA organization chart shows that 18 of the 82 positions are currently vacant. 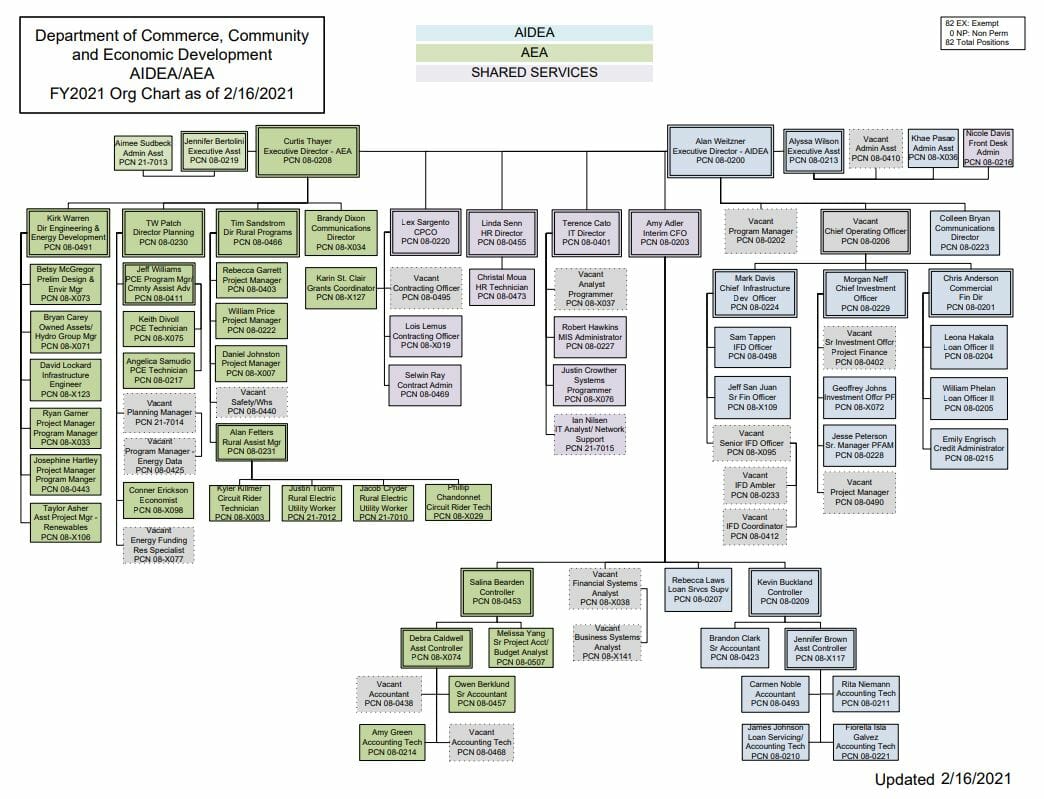 Over the last several years AIDEA has been highlighted in the media for questionable actions. An audit last November found that a $22.5 million loan in 2015 from Department of Revenue to the Mustang Operations Center-1 (MOC-1), a company AIDEA owned with Brooks Range Petroleum, was inappropriate but legal. This Alaska Journal of Commerce story goes into more detail on the audit. In 2019 the Landmine broke the story about a $441,000 sole source contract AIDEA gave to Clark Penney, grandson of Dunleavy supporter Bob Penney. Penney cancelled the contract just over a year later. The Landmine reported in December that businesses associated with three board AIDEA members and one employee received over $400,000 in CARES Act grants. All applied within days of the program ending.

I’ve experienced horrendous behavior by management when I worked for the state of Alaska. In my opinion this “investigation” will result in villifying the employees; the state will never admit any wrongdoing. Hire an employment attorney for fair representation.

Another legacy of too much money and not enough sense. Eighty two “make work” positions for routing state funds to the politically connected. Let us try a couple of years without these “agencies”. I bet we will come out just fine. .

The way these employees are being treated at these two Agencies is atrocious! Sexism, harassment, age discrimination, retaliation, humiliation, threats, and verbal abuse is above imaginable. Although AIDEA HR Director chose not to help these employees as she should have; hopefully DOA HR can handle these allegations as they should have been handled. The Executive Directors received raises and AIDEA hired a new executive (from Texas) during this Pandemic each making over $200k-$250k/year. This along with the “inappropriate” transactions and closed-door business dealings is a reflection of the current AIDEA/AEA culture. The Governor needs to clean house; these Executive Directors,… Read more »

HR exists to protect the employer, not the employee. The investigation will go nowhere because that’s what has happened to multiple State HR investigations I have been aware of. They are more interested in saving face for the State than actually making people whole.

82 employees? They could still grift and cheat with half that level of staffing.

AIDEA has been an embarrassment for years but especially during the pandemic. Here was a chance with their assets and bonding ability to provide finance and refinance at low rates that would have cost them nothing and would have immeasurably helped Alaskan people and businesses for years if not generations. Instead they kept the rates high and made it difficult if not impossible for Alaska businesses to get the help they needed. Help that would have made a huge difference in the lives of countless Alaskans. This agency needs to be cleaned out and a new savvy and experienced group… Read more »