The Alaska Landmine has obtained a letter sent by the Alaska Young Democrats to Alaska Democratic Party leadership regarding U.S. Senate candidate Al Gross’ campaign manager. The letter, dated August 5, doesn’t name Gross or his campaign manager explicitly, but it was clearly about them.

Here is the letter: 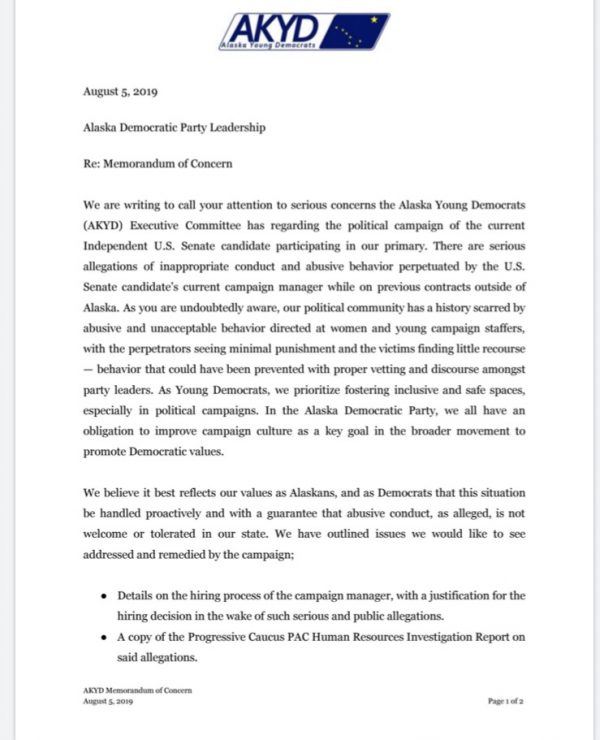 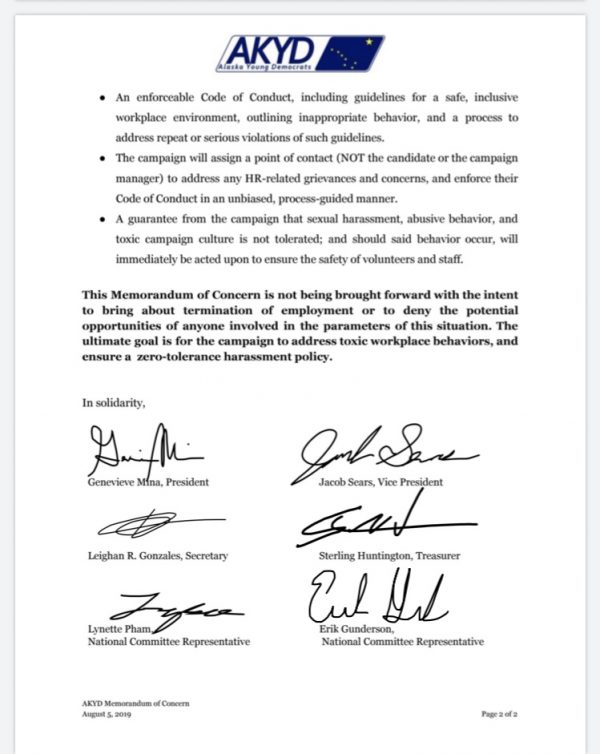 They were referencing this July 2019 MSN article about Keith. The original article ran in the Milwaukee Journal Sentinel. The article was about Keith’s time at the Progressive Caucus. According to the article:

Seven sources, including some former Bryce staffers, told the Journal Sentinel that Keith routinely made inappropriate sexual comments to and about female staffers and volunteers, used crude language and had angry outbursts — at times yelling and throwing things at his subordinates.

In one incident last year, sources said Keith screamed at staff and threw a water bottle during a meeting after learning some campaign workers left before 9 p.m., which is the time Bryce campaign staffers were required to stay to make fundraising calls.

All of the sources were anonymous. Keith denied the allegations. According to the article:

David Keith absolutely denies the allegations, which appear to come from political consultants with scores to settle,” New York-based attorney Lesley Brovner said. “He will not allow this to distract him from continuing to work to elect Democratic candidates.

Keith was hired to manage Al Gross’ campaign in July. After I received the letter, I started asking around about it. At first, no one wanted to talk about it or give a comment. Eventually, several sources told me that congressional candidate Alyse Galvin and Representative Ivy Spohnholz (D – Anchorage) had encouraged the Young Democrats to write the letter. I contacted both Galvin and Spohnholz. Both said they had nothing to do with the letter, but were aware of its existence.

The letter includes five demands and a strange ending that says they were not trying to get anyone fired or deny anyone any opportunities. That struck me as very bizarre. I showed the letter to two lawyers familiar with labor law. Both agreed that it appeared to be drafted by an attorney or someone very familiar with labor law. The Young Democrats told me their executive committee drafted the letter and that, “No other parties were consulted or involved in this letter.” Genevieve Mina, the President of the Alaska Young Democrats sent me the following statement regarding the letter:

Alaska Young Democrats supports the Alaska Democratic Party Code of Conduct and the Alaska Young Democrats Code of Conduct in all political environments. The AKYD Executive Committee drafted the Memorandum of Concern to request clarity and guidance from Party Leadership. Our concerns were promptly and satisfactorily addressed, and we have moved forward. We sincerely regret any negative impact that it will have by being published in a public forum. We look forward to continuing our support and appreciation for Democratic nominees across the state.

The Republicans had weirdo Ben Sparks and Adam Jones left behind his own problems (huge problems) in Alaska. Alaska Democrats have held their own accountable before and rather quietly so this getting out is a surprise.

I am saddened that the conditions in AKYD did not improve after Senator Tom Begich finally got Jay Pamley removed as the ADP director. The hope was that these aspiring children would learn on their own that Jay’s ways of private defamation needed to be left in other states. That they continue to try to harm other democrats only shows me that Alaska is in great danger if these individuals have power or run for office. If they do, you may expect more of their innocent coworkers having their lives destroyed by children who only desire power. Thank you for… Read more »