The Landmine has obtained a whistle blowing complaint from Christina Hendrickson, Anchorage Mayor Dave Bronson’s Real Estate director, sent to members of the Anchorage Assembly. In the complaint, Hendrickson alleges that the hiring of Jim Winegarner violated Anchorage Municipal Code and constituted gross mismanagement, and accuses the Bronson administration of fraudulent use of public funds.

Hendrickson says that she and Winegarner, who has worked in oil/gas as a land manager, both interviewed for the Real Estate director position on June 25. Hendrickson was hired on July 1. On July 7, Winegarner was brought on as Acting Chief Housing Officer. According to Hendrickson, the Rasmuson Foundation funds the grant for the position of Chief Housing Officer and must approve the individual selected for the position. This is shown in an attachment provided in her complaint. 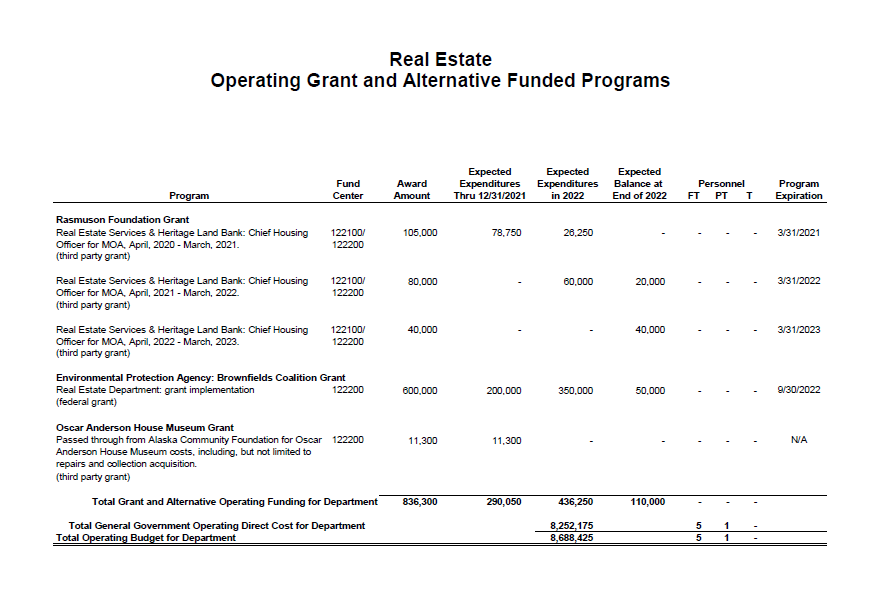 Hendrickson states that Winegarner was brought on as Chief Housing Officer even though he had not been approved by the Rasmuson Foundation. According to Hendrickson, Winegarner “continued to sign his emails and act as the Acting Chief Housing Officer.” A phone call to the Rasmuson Foundation about this has not yet been returned.

On August 26, Hendrickson asked for approval for a candidate she identified for a land management officer, which was an open and funded PCN in her department. The next day, she claims the Mayor’s Office transferred Winegarner to an open PCN in her department without approval. She provided a voicemail from Craig Campbell and Sami Graham, Bronson’s chief of staff, regarding this decision.

Hendrickson says Winegarner was not qualified for the position and that another candidate had already been selected. She says the Mayor’s Office then “gifted him title of Executive Director of the Heritage Land Bank, for which he is not qualified and for which there is no funding in 2021 nor 2022 budgets.” 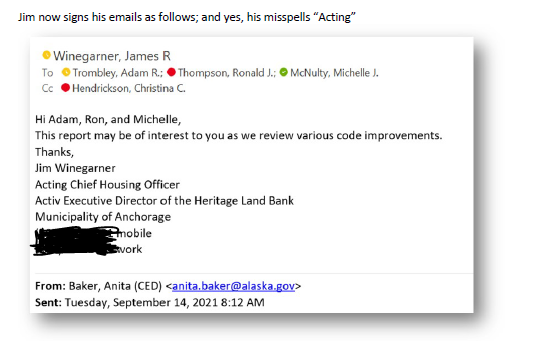 Hendrickson says that during the week of August 30, Adam Trombley, who oversees Real Estate as director of Economic and Community Development, worked with Sami Graham and Brice Wilbanks to remove Winegarner from the PCN he had been put in. After, she says, no one could articulate what Winegarner does or how he is being paid. Last week, while Trombley was on PTO, Craig Campbell called Ron Thompson, who was filling in for Trombley, and told him Winegarner “would remain in that PCN and that money was being located for him.” Winegarner is currently listed as “Land Management Officer” in the Municipal employee directory. In a phone call today, Campbell stated that Winegarner currently serves as Acting Chief Housing Officer and Acting Director of the Heritage Land Bank, and that the positions are funded by the Municipality.

Hendrickson concludes the complaint with the following:

On 9 September, I provided the below email to my direct supervisor, Adam Trombley. He responded with an in-person meeting on 13 September with myself and Ron Thompson. He stated he would call Craig Campbell to resolve. Later he conveyed Craig’s desire for Jim to become Executive Director of the Heritage Land Bank and would find the money to do so. Adam is on PTO from 15-20 September.

For over a decade, the Real Estate Director has fulfilled the role of Executive Director of the Heritage Land Bank. As shown in my budget proposal, there is no need for an additional Executive Director in the Real Estate Department (Attachment E). Our lean Department is a superb performer, exceeding the needs to stakeholders and collaborating among Departments in the best interest of citizens and neighbors. The method by which the Mayor’s office hired, funded, transferred, and is trying to fund Jim violates multiple codes and is fiduciarily irresponsible. The Mayor required each Department to cut 5%. The Real Estate Department was unable to do so because we carry the lease and rent payments for municipal services. When evaluating my team for efficiency, I found the open and funded position in my department to be of the utmost need for modernization and succession planning. Further, the qualified candidate was willing to take a much lower salary to begin his/her career with the Municipality of Anchorage (Attachment F).

The entire complaint can be seen here.

In the email sent to Assembly members, Hendrickson concludes by stating:

This is all documented. I take Ethics very seriously and find the code violations unethical and fiduciarially [sic] irresponsible.

An unqualified person occupying an PCN in an acting capacity violates the aforementioned citations and was done without my consent as the Real Estate Director.

Niki Tshibaka, the head of HR for the Municipality, directed inquirers to Bronson’s communications director. An email and phone call have not yet been returned. A phone call to Winegarner was also not returned.

Not long after this story was published, Mayor Bronson announced Winegarner as his new Real Estate director.

The story will be updated with any additional information.

nothing this administration does surprises me.

Ha! Tshibaka kicks it over to the Communications Director! You know, because why would the HR director want to get involved in any personnel matters. Just not his bailiwick.

@Taku: Tshibaka is “Niki” a Female , as in SHE.
However I moved from Anchorage a month after the ballots were submitted (the moved had been planned since Feb. of 2020) so I neither voted or commented on the present politics. ENJOY you left/right battle there. and pass me the popcorn!

Nike Tshibaka is in fact a guy. Married to Kelly Tshibaka. A pair of grifters if there ever was.

Yea Arthur, you’re wrong. He is in fact a man. He was formerly a deputy commissioner at Department of Education. Another job that he was unqualified for. I have a few friends who dealt with him in that capacity, and the prevailing consensus is that he had no clue.

Tuckerman thought his wife was hot, so he keeps getting these jobs.

Thanks Jeff. The stench just gets stronger every day. Recall now appears to be the only solution.

Whistle up a storm !

1
Reply
Stunned, I tell you

And this is why elected officials prefer loyalty to qualifications.

Did you ever hear anything else about Halcro’s flameout? Wasn’t that a LOT more money? Yet no scoop. Everyone who knew kept tight lips. Even Halcro wouldn’t specify what lies made him quit.

Bronson brought someone inside who was willing to turn state witness. One more failure 😂

Could someone please tell me the definition of PCN? It is not defined in Jeff’s article. Thank you.

Position Control Number. Basically a code for a position.

Not neccessarily. You could be taking PTO if you are sick and that ain’t a vacation.

At the very least, you should edit out Campbell’s number from that voicemail.

Interesting Mr. Campbell’s other number is 907-444-4212 which is the number to Calista Elders Council

“I am continually amazed how the uber-left is able to twist the truth to fit their narrative. They tell us this past summers riots were peaceful protests. They say the Jan. 6 Capitol occupation was instigated by Trump and neo-nationalists. We now see that the occupation was actually instigated by left-wing anarchists, planned days before President Trump delivered his speech.”

Wonder if he is going to be at the rally in DC tomorrow?

anyone else wondering why ADN or KTUU or any other news agency in Alaska hasn’t picked this story up? because they need to. now. any accusation of ethics & misuse of public funds in any public office setting needs to be thoroughly reviewed whatever side you swing on.

While it’s likely Bronson is fulfilling campaign promises here, it’s notable that Hendrickson has zero qualifications to be a Real Estate director. She’s hardly held a job for more than a year or two and I recall she also threatened to sue the Alaska Railroad when they let her go. Under what circumstances was she hired by Bronson?