As Senator Dan Sullivan (R – Alaska) was being introduced by his wife Julie at his kick-off fundraiser tonight, a female protestor approached the stage holding a bag. As Sullivan’s campaign manager, Matt Shuckerow, attempted to intervene, another woman charged him. Video obtained by the Landmine shows the entire thing. It is super loose!

Shuckerow threw the woman who charged him – who was trying to prevent him from getting to Sullivan – to the ground and then rushed to Sullivan and his wife. The woman who initially approached Sullivan and his wife tried to reach into a bag but Shuckerow initially prevented her from doing so. Not long after she pulls out of her bag what looks to be the heart of a either a moose or caribou and tries to throw it. 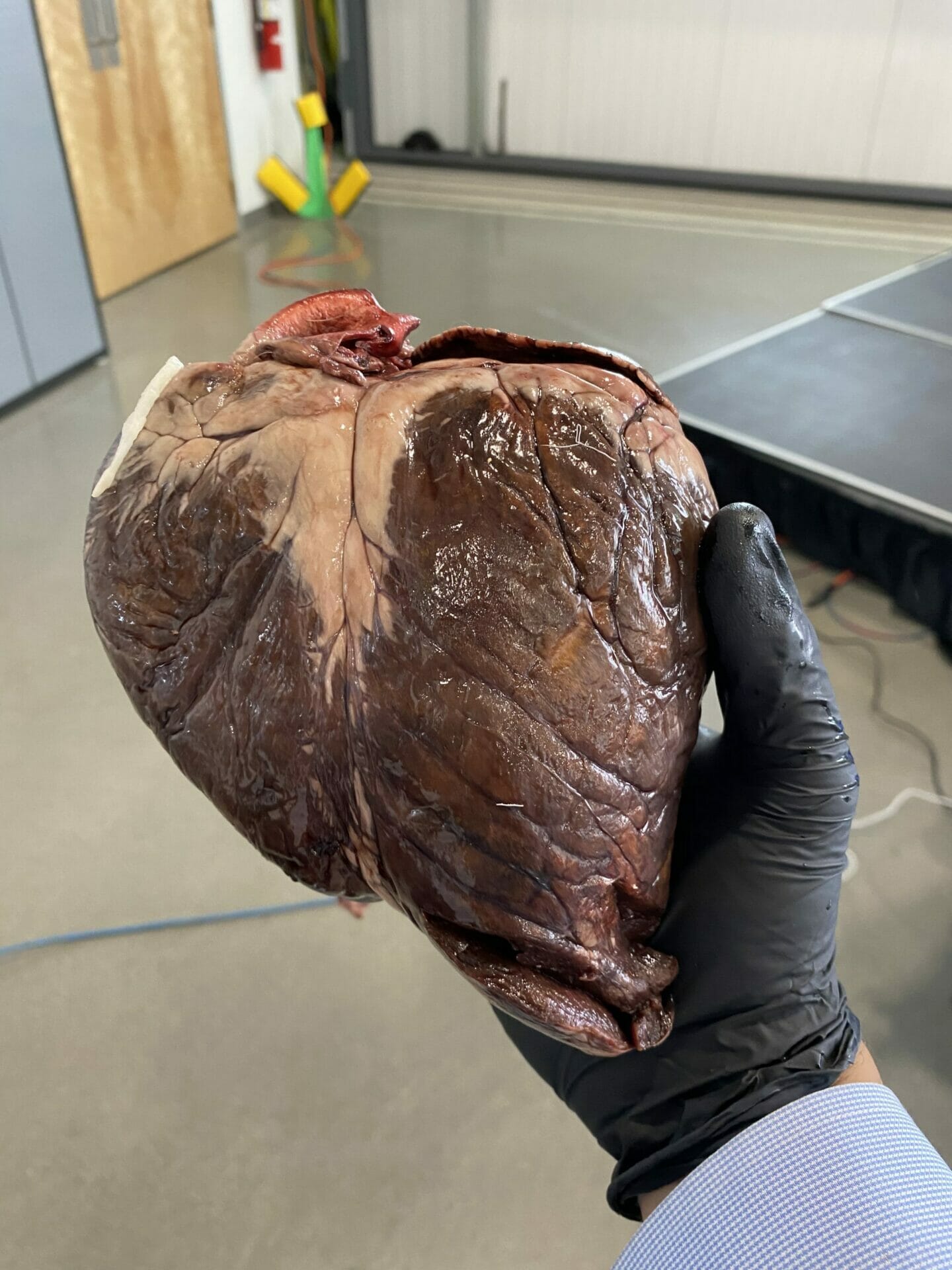 You can then see Steve Strait prevent the woman in red from getting to the stage. Then two more women can be seen approaching the stage, but are blocked by former Anchorage Mayor Dan Sullivan (no relation to Senator Sullivan) and several other attendees. One of the women had a banner she was trying to display. Then Mike Robbins, Republican Chair of District 26, and Shuckerow can be seen escorting two of the women out of the event. Shuckerow’s response time is impressive.

As the women left the event they smeared what appears to be blood on several of Sullivan’s campaign signs. Sources report the women have contacted the Anchorage Police Department claiming they were assaulted. The video clearly shows this was not the case. 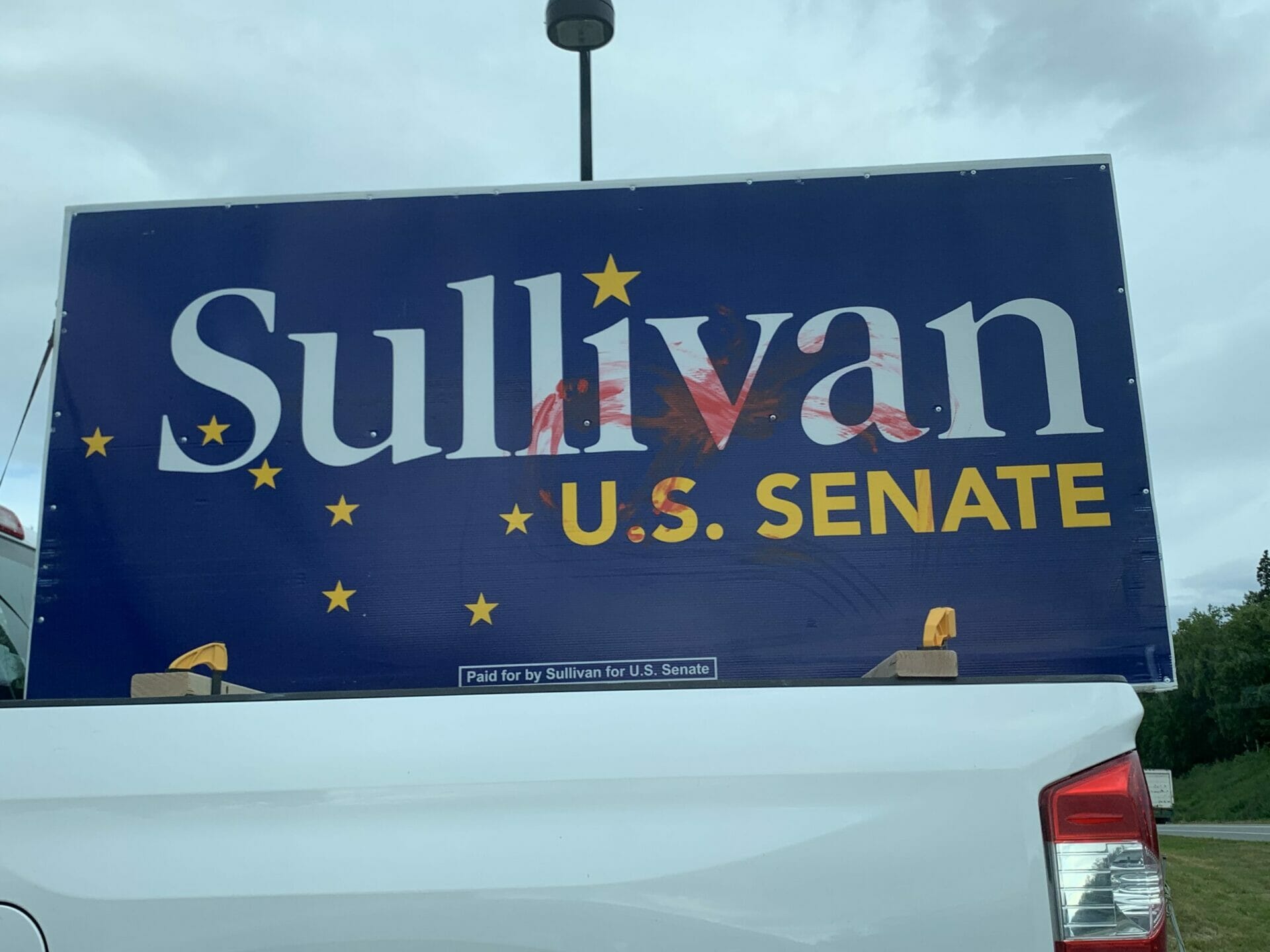 The event was held at a ROTAK Helicopter Services hangar at the Ted Stevens Anchorage International Airport. Shuckerow previously worked as Governor Mike Dunleavy’s (R – Alaska) press secretary. Sullivan will face Dr. Al Gross, who is running as an Independent in the Democratic primary, in the November general election. 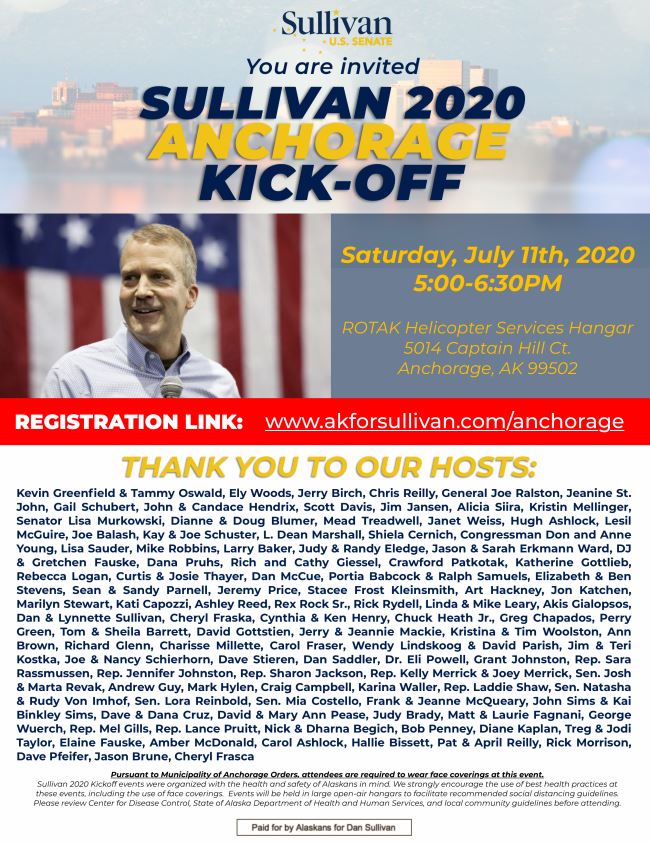 What exactly do you suppose their message was? Serious symbolism perhaps; however the message was lost and I suppose Dan Sullivan just picked up more votes and the recall effort was probably set back also. These ladies might want to look up “pyrrhic victory”.

Remember Lynn, this is the Landmine.

If you are not understanding what was going on, then I guess you only read the Landmine’s story for source. Look at more. I think you may have forgot about all the folks, too, who will VOTE Dr. AL GROSS Because of the way Sullivan’s team handled it as well, as the direct action protesters might have done what you said.

Thank you……my takeaway is have a taser charged and ready should Shuckerow be in the room.

The craziness has reached Alaska . These are not true Alaskans. They are anarchists and
their protest is not going to be received well by Alaskans.

Bull shit. These are real Alaskans. They are Alaskan women sick and tired Sullivan’s cowardice and incompetence, and trough default corruption.

Surely You can convey Your opinion without unseemly gutter words………

Moose nuggets; Alaska Natives ARE real Alaskans. They are Alaskan women sick and tired of Sullivan’s cowardice and incompetence……he just wants to be a K Street lobbyist for the Native corporations.

Word is, they were minions/acolytes of Al Gross… I expect more shenanigans of wokeness. Probably their protest against ANWR and the NPR-A getting opened….. Hard to say about the true believers.

I do not believe for one minute that Dr. Al Gross had anything to do with or any knowledge of what these women did. Please don’t start any unsupported rumors.

Hello Brian,
“The word is ” explanation is right up there with “I don’t know but I’ve been told…”. Good for cadence calling but not much else.

Another reason to never listen to the voices in your head Brian.

Looking through the laundry list of names, I see a curious intersection of the nonprofit sector and Native corporations in a small selection. To all those white people who keep drumming “Homelessness is a Native problem”, you might have an answer as to why that isn’t getting traction.

There could have been a gun in that bag.
Thanks for the quick response in getting these agitators off the stage.

You own a gun right? I don’t, and didn’t think there was a gun.

Ms. Sullivan – it is entirely responsible For political campaigns to take immediate, vigorous, even violent, action to protect a public figure from the potential of an unexpected, perhaps serious threat. To excuse or defend these protesters on grounds they were ultimately found not to have had weapons is illogical. Sirhan Sirhan, “Squeaky” Fromme, Leon Czilgosz, John Wilkes Booth, Lee Harvey Oswald and John Hinkley MAY have had flowers in their hands and love in their hearts when they accosted public figures. But in fact, they actually had weapons, usually concealed weapons, which they used to ambush and kill those… Read more »

I hear you and concur that safety is of concern. Not questioning that, campaign wise here.I wasn’t arguing that.

I’m did argue that the folks who thought it was a gun are folks who own guns.

Logic is only logic. One way of looking at things. And by the way, overtly emotional in the fear argument for someone arguing for logic. Emotion is illogical.

And my last name is Suttman, not Sullivan.

Why no details on why the protestors were at the event and what their greviances were, Jeff? You certainly povide lots of insights when you opine about other things political and social, why not now?

Shuckerow did the right thing, you can clearly see the woman in red collide with him as he didn’t see her coming, likely to stop him from getting to the woman from reaching in her bag.

She should be charged with assault.

They didn’t help our efforts to put a real Republican in office, and eliminate the RINO’s. If you’ll notice almost all riots, arrest, protest there’s a woman in the background, yelling and throwing things escalating the aggression. Why is it people cannot see past the nose on their face. The effort went backwards not forward like some good hard hitting questions would have done. Stay home ladies your more of a problem than a solution. And no im not against women in general. I’m just calling it like I see it! And yes I am an Alàska Native. Shareholder with… Read more »