Recently, I filed a public records request for security footage from the Capitol building in Juneau of Senator David Wilson (R- Wasilla) allegedly putting his cell phone under the skirt of a female staffer who was attempting to prevent him from listening at the door to a private meeting of the Alaska House Majority.

Explanation of the request and the letter requesting the footage can be seen here. 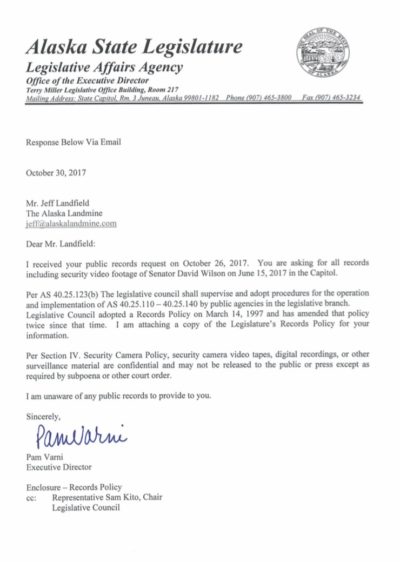 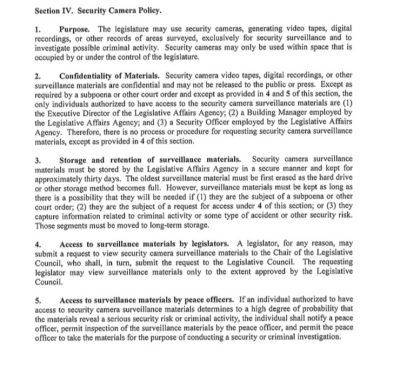 Legislative rules allow for this kind of thing to be covered up – protecting a culture of abuse. What message is being sent when an elected official can put their phone under the dress of a female staffer, in the open, in a government building, and the public is not allowed to see the tape? The Capitol is a public building and belongs to the people, not those elected to serve the people. This incident occurred in a hallway, where there was no presumption of privacy. Those in power are not only aware of this incident but are actively covering it up to prevent embarrassment.

Why is Senator Wilson being protected?

The policy cited by Legislative Affairs was adopted in 1997 and has only been updated twice. This is not a partisan issue. Legislative Council is made up of both Republicans and Democrats. Click here to view their contact information. They can all be seen below: Section 4 of the Security Camera Policy is the key to the public being able to view this tape:

If Senator Wilson is innocent of these very serious accusations, the tape will exonerate him and should be released. If he is not, then the Legislative Council is covering up a potential criminal activity, and at the least a culture of toxic sexual harassment and misconduct by elected officials. If this is the case, Senator Wilson is not fit to hold his seat. Preventing the truth from coming out is a dereliction of duty to all who sit on the council and call themselves “public servants.”

Very disturbing indeed. Why would they not try to be bad people and cover it up? The shoe fits unfortunately.

Could this be fake News, just to stir S__T on someone?