Documents obtained by the Landmine show that U.S. Senate candidate Kelly Tshibaka, who is challenging Senator Lisa Murkowski (R – Alaska), illegally obtained an Alaska resident sport fishing license on August 22, 2019. The documents were obtained via a records request submitted to the Alaska Department of Fish and Game by the Landmine following the release of Tshibaka’s “Fish Camp” video on July 15.

The video, which was filmed in Ninilchik, depicts Tshibaka pulling fish from a commercial net and placing them into a brailer bag, which is then sold to a tender. According to the documents obtained by the Landmine, Tshibaka does not hold a commercial crew license, which is required by law to work at a commercial fish site. The Landmine story “Kelly Tshibaka stages ‘fish camp’ video featuring Lisa Murkowski supporter’s boat” provides more background on the video. Multiple sources have told the Landmine that Tshibaka could face a citation for illegally fishing on a commercial net.

In addition to the commercial license violation, the records request also revealed that Tshibaka illegally obtained a resident sport fishing license in 2019, while serving as commissioner for the Department of Administration.

a person, except as provided in (c) – (f) of this section, is a resident if the person
(1) is physically present in the state with the intent to remain in the state indefinitely and to make a home in the state;
(2) has maintained the person’s domicile in the state for the 12 consecutive months immediately preceding the application for a license;
(3) is not claiming residency in another state, territory, or country; and
(4) is not obtaining benefits under a claim of residency in another state, territory, or country

Tshibaka was appointed commissioner by Governor Mike Dunleavy (R – Alaska) on January 31, 2019, after Dunleavy’s original nominee, John Quick, resigned due to controversy surrounding his resume. According to her resume, Tshibaka worked at the U.S. Postal Service Office of Inspector General in Arlington, Virginia until January 2019.

Tshibaka and her family appear to have left Virginia and arrived in Alaska sometime in late January or early February 2019. Tshibaka’s $81,000 moving expenses were paid for by the State of Alaska, and were widely reported on by the Alaska media. 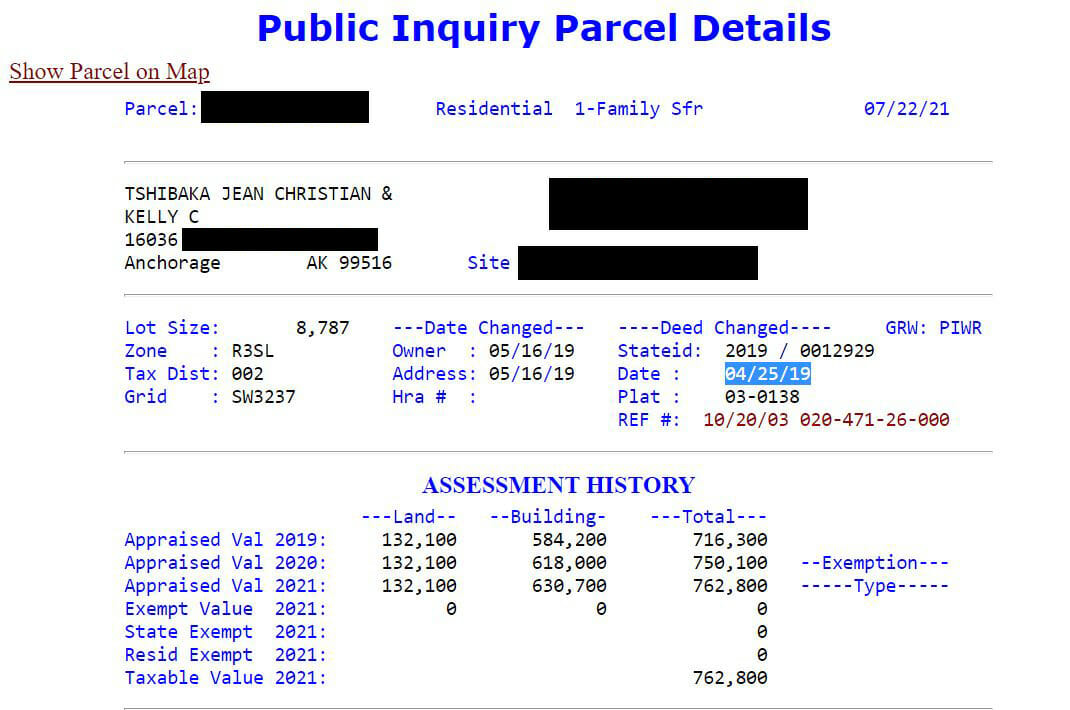 Maryland property tax records show that the Tshibakas sold their Maryland home on June 27, 2019. The sale price is listed at $0 in government property records, but according to Zillow the home sold for $500,000.

It is unclear where Tshibaka and her family lived when they arrived in Alaska in early 2019 until they bought their Anchorage home in April 2019. Regardless of the exact move date and circumstances, all available evidence indicates that Tshibaka had not maintained a “domicile in the state for the 12 consecutive months immediately preceding the [Alaska resident sport fishing] application,” thereby violating Part 2 of Alaska Statute 16.05.415. 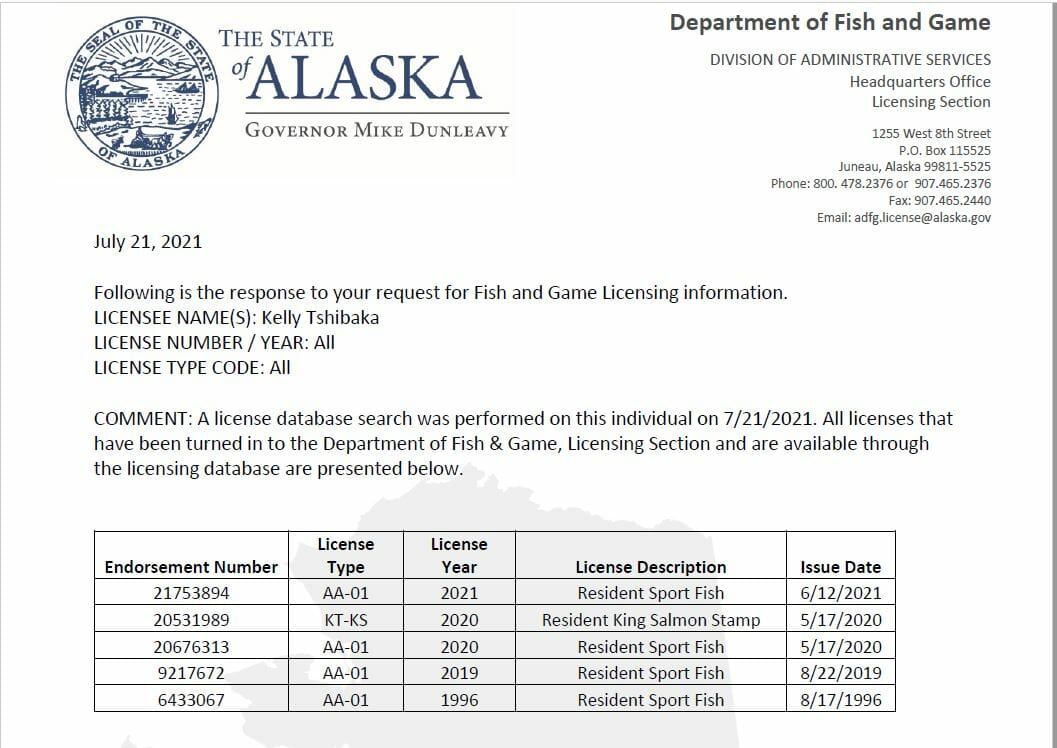 Records obtained from the Alaska Division of Elections list Tshibaka’s original Alaska voter registration date as April 25, 2019 – the same day as the purchase of the family’s Anchorage home. However, according to the Maryland State Board of Elections, Tshibaka is still registered to vote in Maryland, thereby making her registered to vote in both states. This occurs frequently when individuals move to another state and forget to cancel their voter registration in the state they left. 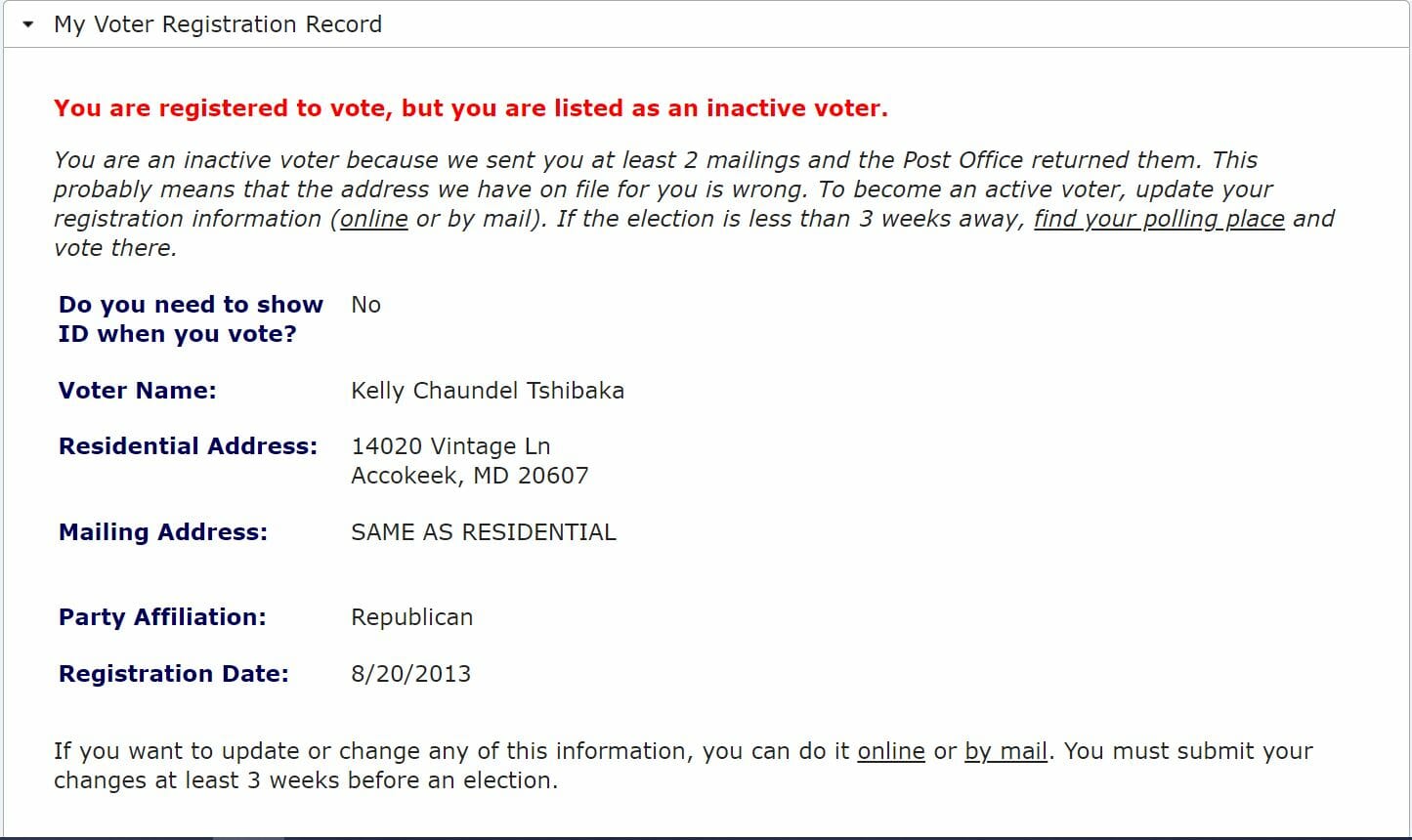 Tshibaka, who graduated from Harvard Law School in 2002, is listed in the Maryland Bar directory as an active attorney. She is not listed as an attorney in the Alaska Bar directory.

Tshibaka was born and raised in Anchorage. She graduated from Steller Secondary School in 1995, and left state to attend Texas A&M and Harvard Law School. Tshibaka is the first major conservative challenger to Senator Murkowski, who has served in the U.S. Senate since she was appointed by her father, Governor Frank Murkowski, in 2002. Tshibaka has been endorsed by former President Donald Trump and the Alaska Republican Party.

At least she wasn’t wearing a Speedo.

Thank you Jeff. You seem to have found a large hole in this “carpetbagger’s” carpetbag. Too bad she missed an opportunity to understudy Jefferson “Soapy” Smith because that was a person who could “con” Alaskans (except Frank Reed and a few others) often with style. Can you imagine Tshibaka, who appears to be a “lump of unethical modeler’s clay”, in the hands of Mitch McConnell, Ted Cruz et.al.?

She’ll fit right in with the crop of GOP crooks in DC.

Sometimes too much can be made of who is a “real” Alaskan and who isn’t, but for crying out loud, has Tshibaka even been up here long enough to collect a single PFD? I think not. This is ridiculous. It’s nice that she grew up here and moved back, but there’s no reason whatsoever to think she has any kind of nuanced understanding of the problems facing the state. And her tenure at the Department of Administration was a DISASTER. I am not even surprised that both she and her media team went out and filmed her committing a crime.… Read more »

Jeff, good reporting. Even those little kids need licenses if they’re working on the nets. It seems the Tshibaka family filmed themselves committing at least a half dozen crimes. I hope ADFG is watching. And yes, others can and do get in trouble for this and cited. Thank you for your work. – Peter

Why haven’t the Alaska State Wildlife Troopers issued two citations to Kelly Tshibaka yet? The first infraction was 2.7 yrs ago. The current infraction is on video. What other proof do they need? Start with the Sport Fishing license infraction with the $ fine: That would be a start in the right direction! @akstatetrooper

Who cares. Plenty of people help out on commercial nets without licenses and nobody gives a hoot. Nothing burger. You’re just scared because Tshibaka is a strong, smart and †Christian† challenger to the Murky-owski dynasty. Tshibaka grew up in Alaska and I’m sure she knows fish and fishing and she will be a great Senator for our state.

…so by your “logic” smart xtians should be able to break the law and buy Residential State Fishing License illegally, without consequences. Nice… : / She can and could AFFORD to buy an Out of State Sport fishing license, but chose to break the law. And she cannot feign ignorance if she grew up here. lmao…

$360.00 vs. $70.00 Nonresident vs. Residential/Non-residential Annual Sport Fishing and Hunting licenses with a King stamp. This is not what US Senators should be modeling, regardless of abc…xyz!

“Who Cares”?! Seriously Jeff, I would think that somebody who is promoting themselves as a potential candidate for Senator representing the State of AK should care, as should every body else considering her qualifications. Ignorance of the law is no excuse, and the fact that she has a Law degree would indicate that he should know the law pertaining to whatever fishing she is doing, sport or commercial.

Kelly could have bought a non-resident license and expensed it as part of moving. Most grifters are more clever than this carpetbagger

The real question now is whether Dunleavy Endorses or Pardons her first.

This is a very interesting development in Alaska politics. Remember the recent for Kelly Tsibaka was held at the home of Doug Massie who is the appointed/fired/appointed colonel of the Alaska Wildlife Troopers

Maybe we should try to paint opposition to the disaster known as Lisa? Why don’t you dig up the dirt on the libs once in awhile?

Senator Lisa Murkowski (R – Alaska) a LIBERAL?! loooool …maybe you need to read some recent political history in our State. Oh that’s right, I forgot. The Alt-Right make up their own “facts”! Nevermind…

Forget the fishing license, thats small potatoes. I have Mrs. Tshibaka knowingly violating the Alaska Constitution and related laws. She violated the civil rights of a 76 year old senior citizen/Veteran. Tshibaka should stand trial and be put in prison, not running for federal office. I have the evidence.

Remember Joe Miller.
You don’t?
He lost to Murkowsi in a write-in.
Nobody else remembers him either.
He lied to save money as a carpet-bagger on a hunting license.