In March, it was announced that Amy Demboski would be leaving her job as Deputy Chief of Staff to Governor Mike Dunleavy (R – Alaska) to take a job as assistant commissioner at the Department of Commerce, Community, and Economic Development. Demboski resigned from her position on the Anchorage Assembly in December of 2018 to take the deputy chief of staff job for Dunleavy. Demboski posted about the move on Facebook and was seemingly excited about it. 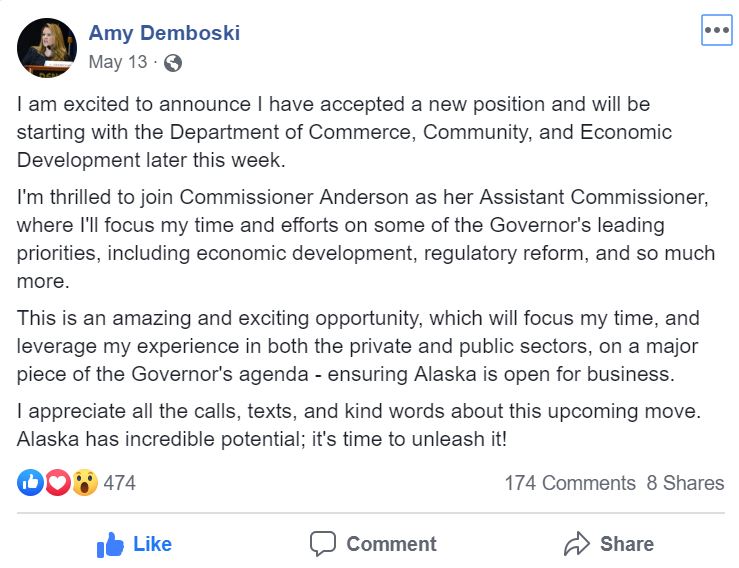 But at the time there was a lot of talk around the Capitol and in political circles that the move may not have been voluntary. To explain what likely happened we have to go back to December. Two days after taking office, Governor Dunleavy announced his picks for his public safety team. These included Amanda Price as his pick for Commissioner of the Department of Public Safety. Price had worked on the Dunleavy campaign as a deputy campaign manager but left that role in June of 2018 to manage Edie Grunwald’s campaign for lieutenant governor.

Dunleavy had appointed his former campaign manager, Brett Huber, as a senior policy advisor after he was elected. Many thought Dunleavy would pick Huber to be chief of staff. However, Dunleavy instead chose Tuckerman Babcock. Babcock, the former chair of the Alaska Republican Party, had a reputation for aggressive and polarizing political behavior. His appointment as Chief of Staff raised eyebrows among many Democrats and some Republicans.

Choosing Price as Public Safety commissioner baffled many. She had no prior experience in law enforcement, and it was known in political circles that she had been forced to resign from her job with former Governor Bill Walker. Throughout the course of her confirmation, a lot more came out about Price. This included allegations of plagiarism, inconsistencies on her resume about her education, and lying to the Senate Finance Committee about why she left her job with the Walker administration. Much of this drama played out in the House State Affairs Committee. Walker’s former Chief of Staff, Scott Kendall, testified about Price’s absenteeism and conflicts with the Walker administration. Representatives Laddie Shaw (R – Anchorage) and Sarah Vance, both members of the House State Affairs Committee, (R – Homer) were critical of Price during the confirmation hearings.

Dunleavy had taken note of all of this, and many wondered whether he would withdraw Price’s name. However, Babcock was a big proponent of Price and, according to multiple sources inside the administration, insisted that she not be withdrawn. Dunleavy was apparently concerned. At some point, without Babcock’s knowledge, Dunleavy asked Demboski to look into Price’s background and report back to him. Demboski agreed and quietly began conducting an investigation. Her investigation included interviews with Price in which Price was questioned about her credit history, educational background, and experience with the Walker administration. According to sources, the topic of extramarital affairs was also raised. Price refused to answer questions about that subject.

Sources inside the administration inform me that Babcock was furious when he learned about Demboski’s investigation. According to these sources, Babcock has consolidated power within the Governor’s Office. Absolutely nothing is allowed to get to Dunleavy unless Babcock approves it first, and all public records requests must be reviewed and approved by him.

Demboski had put her findings into a report for Dunleavy. According to multiple sources inside the administration, Babcock met with Demboski and ordered her to destroy both the physical and electronic copies of the report. Demboski either believed that this was a crime or thought it may be a crime, because rather than destroy the documents she contacted the Department of Law (DOL) to request guidance.

During this time, several news originations, including the Alaska Landmine, had submitted records request pertaining to Amanda Price. It is unclear whether or not Demboski’s report on Price is considered a public document, but Babcock must have thought so because otherwise there would have been no reason to order her to destroy the report.

According to Alaska Statute 11.56.850., Official misconduct:

(a) A public servant commits the crime of official misconduct if, with intent to obtain a benefit or to injure or deprive another person of a benefit, the public servant

(b) Official misconduct is a class A misdemeanor.

An order to destroy these documents would likely violate AS 11.56.850 based on the Public Records Act. The statute recognizes the crime of “official misconduct,” and makes it illegal for a government official or employee to perform an act that constitutes an unauthorized exercise of his or her official functions. A public official directing the destruction of records subject to the Public Records Act would be an unauthorized exercise of his or her authority.

Babcock knew that if he cut her loose he risked Demboski either going public or acting as a whistleblower. In order to keep the situation private, he needed to find her a position elsewhere in the administration. This is why Demboski was reassigned to the Department of Commerce, Community and Economic Development.

Beyond the legal issues raised by Babcock ordering Demboski to destroy the Price report, this situation has raised new questions about the extent of the power that Babcock wields within the Dunleavy administration. One person in the administration described Babcock as “Running a shadow government.” For example, recently the Russian Ambassador to the United States visited Alaska. During a meeting with Russians living in Alaska, the Ambassador told the group that he had requested several times to meet with Dunleavy, to no avail. Multiple sources confirmed that the request had gone to Babcock, who did not pass it along to Dunleavy.

This is not the head of the Russian/American club in Anchorage, it’s the Russian Ambassador to the United States of America. At a time when tensions are high between Russia and the United States, the fact that Babcock was able to keep this request from getting to Dunleavy is deeply concerning. By the time Dunleavy did become aware of the meeting request from the Ambassador it was too late to meet.

Many questions remain. Why has Dunleavy kept Babcock on as Chief of Staff when it appears that Babcock routinely withholds critical information from the Governor? Did Babcock violate the law by instructing a subordinate to destroy public documents? Is Dunleavy aware of all of this? Does a copy of the report remain or was it destroyed? Did Dunleavy see Demboski’s report on Price? Does he know the real reason Demboski changed jobs? There are many more questions, but they will likely go unanswered as long as Tuckerman Babcock has anything to say about it.

I reached out the Attorney General’s Office and the Governor’s Office for comment on this story. I have yet to hear back from them. I will update the story if they respond.

Does JBER still include the governor’s office in the national security briefings?
Are they briefing Babcock or Dunleavy?

U hope it’s true? Jeez, no one needs to ask your political leanings

Does Babcock fancy himself the Cardinal Richelieu of the Dunleavy reign?

T. B. is more a Warwick the Kingmaker (Shakespeare’s Henry VI version).

Did they uncover why Price was forced to resign from her ED position at STAR?

“Dunleavy took notice of this…”

Jeff-did you talk with your old bud Dunleavy for this report? He using you to burnish his image when it is doing pretty dang poorly.

With all the questions you asked in the second-to-last paragraph, you should have concluded with “These questions and many others will be answered on the next episode of Soap!”, because that’s more likely to happen than will getting answers from any of that gang.

It’s sad watching desperate Tuckerman Babcock PANIC trying to do anything to secure some kind of legacy for himself. That’s gotta hurt. To be that old, in politics that long, with nothing to show for it! I met him two weeks ago and he’s got the personality of a boiled hot dog ?

A FOIA of the electronic records (not just the deleted report) would be useful. Also, it should be viable to supoena the most likely organizations that were interviewed for the background check and independently verify any issues, including why Babcock is so bent out of shape about Price.

That is disturbing that Babcock acts he’s on a tv show. It is dangerous to keep him as Chief of Staff for Governor Dunleavy. Who knows what kind of scandal could be around the corner. Unless Governor Dunleavy pays Babcock out of his own personal bank account, Babcock works for us. HE is NOT the Governor. MISSING a meeting with the Russian Ambassador to the United States is HUGE. And so is trying to steer a confirmation to the point he overruled the Governor??? The Governor told Dembowski directly to do what she was doing. How does that work!!??? What… Read more »

Very unlikely the memos could be obtained in a FOIA which does not allow for internal discussions to be disclosed. But they should be disclosable under the FOIA. The law needs to change.

Good job! What you are covering is a classic example of government curruption that has been rotten from the inside out for many years. Many of these individuals need jail and/or prison for felony and misdemeanor criminal conduct. Thank you for reporting correctly, unlike many news organizations.
As always, have a great day!