Landmine readers – what a jam packed week this has been in Alaska politics! If the rest of the summer is this busy we may need to start expanding the operation. On that note, if your business, campaign, or organization would like to advertise on the Landmine, click here for more info.

The Republicans Do It Again

You may recall the Alaska Republican Party (ARP) had a debate between the Republican candidates for governor and lieutenant governor last weekend in Kenai. We reported on that in last Sunday’s column. What we did not report was the auction that corresponded with the debate. I was made aware of something really bizarre this week regarding the event. Check out this pic of one of the auction items hanging on the wall: 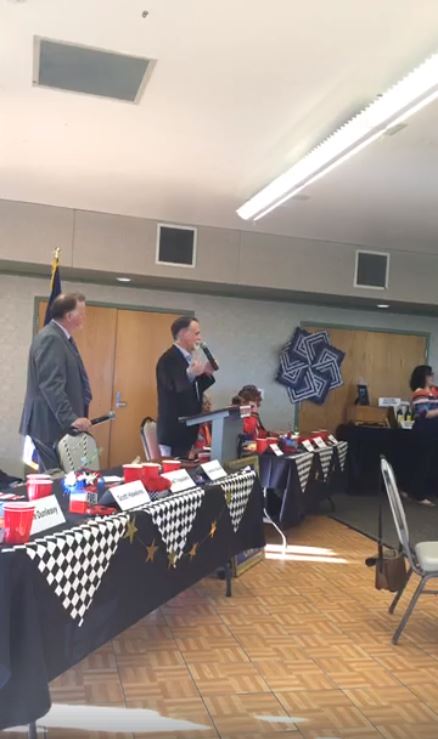 Notice anything odd? Yeah, so did I. That table top quilt eerily resembles a swastika. It was hanging on the wall during the entire event. I guess no one noticed. But it gets better. During the auction, auctioneer in training Senator Peter Micciche (R – Soldotna) auctioned off the Nazi-esque quilt. Kristie Babcock, wife of ARP Chairman Tuckerman Babcock, showed off the quilt in Eva Braun Vanna White fashion. They even announced it was signed by Senator Dan Sullivan (R – Alaska) and Congressman Don Young (R – Alaska)! And now to the Nazi table top quilt – let’s start the bidding at $300.

I would like to send a personal thank you to ARP Propaganda Minister Suzanne Downing for posting the Facebook Live video of the event. Without her the world would have never seen this solid gold. Suzanne, I never thought I would need to tell you this but the first rule of propaganda is don’t screw the people you are representing. You need to do better. Check out this video, courtesy of Suzanne Downing:

I thought maybe I was just seeing things so I showed it to some people to see what they thought. Here are a few comments regarding the quilt:

From a Republican legislator, “I just see a deba…, oh wait is that a fuckin swastika on the wall? Damn it.”

From a friend in Australia, “That’s a fuckin swastika, mate.”

From a legislative staffer, “Who wouldn’t want a swastika quilt signed by Dan Sullivan and Don Young.”

From the kids of a parent who showed it to them, “Are they Nazis?”

From a very high level person, “I was waiting for Indiana Jones to swoop in and take them all out.”

From the wife of a longtime Republican, “Oh boy. Who are these people?”

Representative Jason Grenn (I – Anchorage) held a fundraiser at the home of Scott Kendall, Chief of Staff to Governor Bill Walker (I – Alaska), and his wife Selena. Full disclosure, I was a co-host. It was a packed event with around 100 people. Very high energy! Among the many politicos spotted were Assemblymen Forrest Dunbar and Chris Constant, Jason Brune, Senator Donny Olson (R – Golovin), Penny Gage, Austin Baird, and many others. Governor Walker and his family even showed up. Word is Grenn raised almost $10,000! When I arrived at the event I saw this guy taking a jog past the Kendall home. Between the mullet and the shorts, pure awesomeness. Definitely my kind of guy. 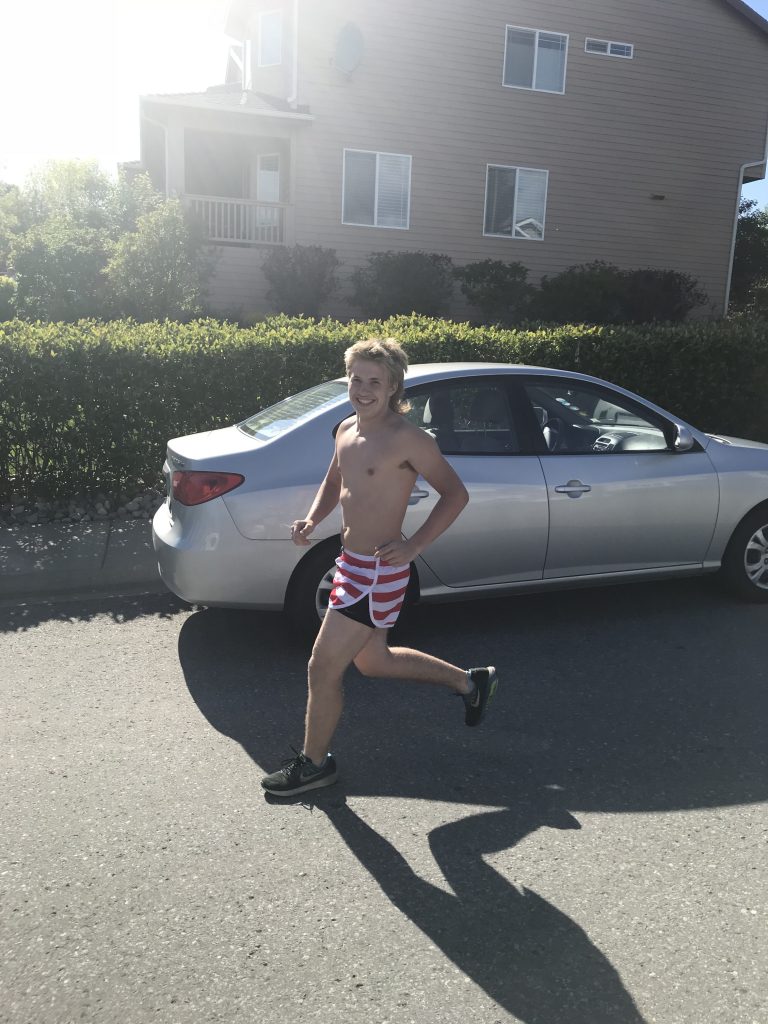 Mead Treadwell held his first event for his campaign for governor. Well kind of. He recently held an event in D.C., so I guess this is his first Alaska event. It even included a regatta! 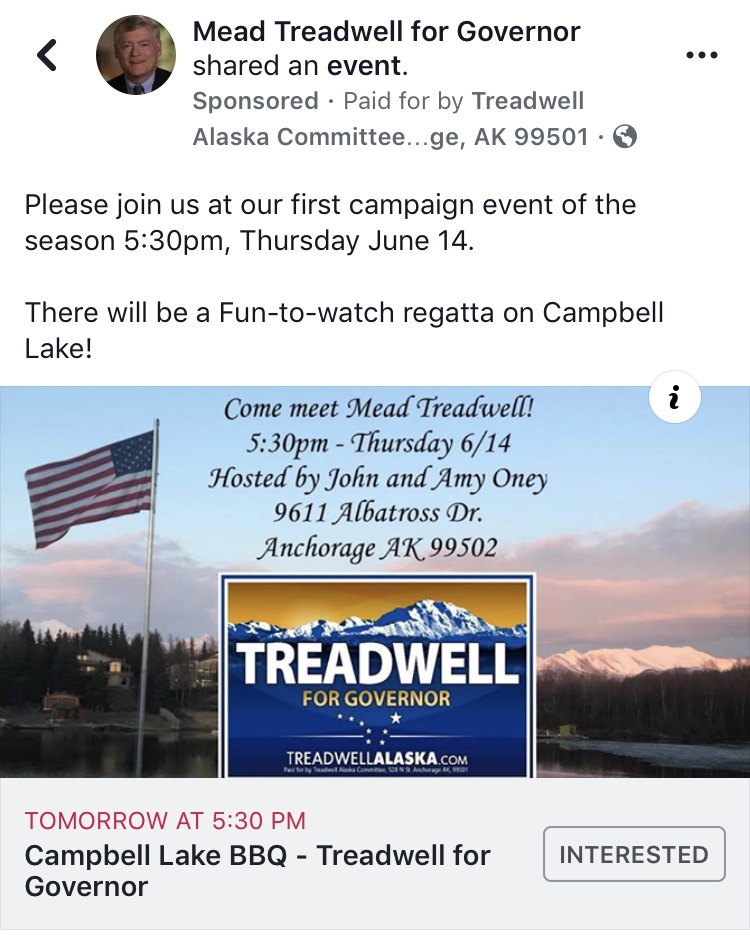 From the D.C. one percenters to the Alaska one percenters, nice! Really reaching out to the common folks there, Mead. I thought about stopping by but I don’t have any boat shoes and didn’t want to witness another Alice Rogoff Campbell Lake takeoff.

The Bartlett Club hosted a debate between congressional candidates Alyse Galvin and Dimitri Shein. They are both running in the Democratic primary. Shein is a Democrat and Galvin is an Independent. It definitely got heated at times. During a part about renewable energy Shein told Galvin, “How can you be serious about renewable energy when your husband’s business is fracking!” At another point Shein was going after Galvin by saying she did not file her campaign finance disclosure properly. To which Galvin replied, “Dimitri, you are the one who got fined by the FEC, not me.” Savage. This is going to be a fun primary to watch. I can say with a high degree of certainty that neither one of them are ready for the wrath of Don Young at a debate. I can’t wait for that!

It would have been more prudent to only invite the Republicans in contested primaries rather than everyone. That would have greatly reduced the number of candidates in attendance. But whatever.

Word is it got pretty heated between Fogle, Riggs, and Shaw, as well as Rasmussen and Vazquez. I love campaign season! Noticeably absent was Representative Charisse Millett (R – Anchorage), Forrest McDonald (he was at the Young Republicans event), and Representative Dan Saddler (R – Eagle River), who is running for the Eagle River senate seat against Reinbold. ARWC – next time break it into smaller debates with fewer candidates.

Alaska Resource Education (ARE) held their annual golf tournament on Wednesday (6/13/2018) at Moose Run Golf Course. It was a great day and packed event with lots of resource folks. Cigars, Bloody Marys, and mimosas were enjoyed. Among the many people spotted at the event were Rebecca Logan, Brett Huber, Representative Dave Talerico (R – Healy), Representative Chris Birch (R – Anchorage), and Chuck Heath (Sarah Palin’s brother and a super nice guy). I gotta give a special shout out to Dave Talerico. After the event was over there was a nice lunch and awards ceremony. Talerico won the split the pot, which was almost $650! He immediately donated it all back to ARE. What a legend.

Amanda Price announced this week that she was leaving her position as Deputy Campaign Manager for Mike Dunleavy’s gubernatorial campaign to go work as Campaign Manager for Edie Grunwald’s campaign for lieutenant governor. At least she’s keeping it in the Valley! Word is she left due to issues with Brett Huber, Dunleavy’s Campaign Manager. Brett, you looking for a new deputy, buddy? Huber and Landfield, now that’s a power team! I also like how the Grunwald campaign did a post about Price joining the team that included a head shot. Weird 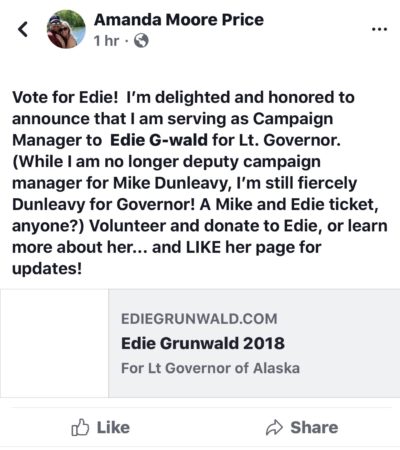 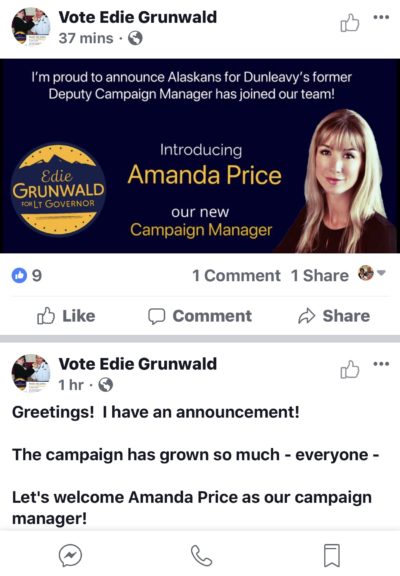 Pride Fest took place in Anchorage on Saturday (6/16/2018). I was not able to attend but judging by the pictures people posted it looked like a lot of people were there, and also very high energy! Democratic candidate for governor Mark Begich was spotted doing a Facebook Live interview with the organizers. The Walker/Mallott campaign had a booth there too. Which is interesting because only three years ago Walker filed a brief with other states opposing same sex marriage. I guess he’s coming around. 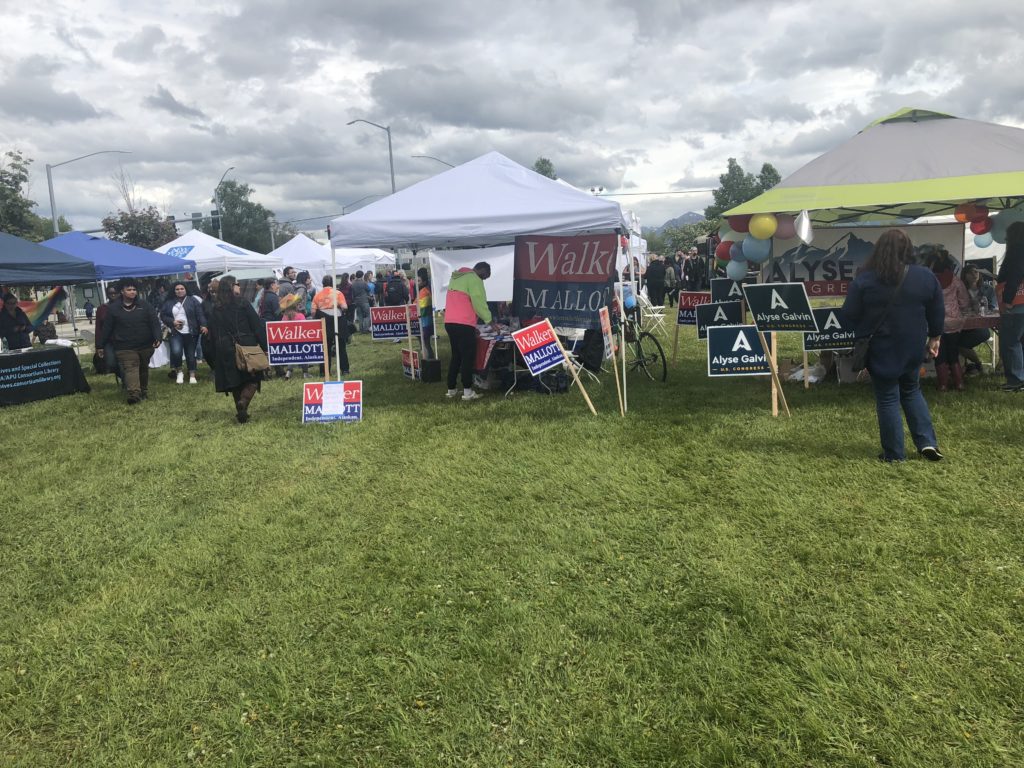 In a Friday email, ARP Propaganda Minister Suzanne Downing noted that MaryAnn Pruitt won a contract to represent the Republican Governors Association in the upcoming election.

There’s just one problem, several political consultants were wondering about the term “won” because they never saw an RFP. Sounds more like awarded than won. Maybe her husband, Representative Lance Pruitt (R – Anchorage), made a call… And is PS Strategies still a thing after the very public MaryAnn Pruitt/Dave Stieren business divorce? I thought it was Mosaic now. I wonder if the RGA knows about the break up. I doubt she will be asking Stieren for any live reads on his show.

On Tuesday (6/12/2018), the Anchorage Assembly voted to authorize the Anchorage Economic Development Authority (ACDA) the ability to buy the LIO building in Downtown Anchorage. They are looking to rent it to the Anchorage Police Department. But a surprise person showed up to testify against the deal. Sharon Lechner, CFO for Calista and former city CFO when Mark Begich was mayor, showed up to express how she thought the deal was bad and could be done better if Calista was the buyer. Lechner is also the ex-wife of Assemblyman John Weddleton. The two had a rather heated exchange about the deal. Awkward. After the vote, as she was walking out, Mayor Ethan Berkowitz pulled her aside to have a chat. He did not seem too happy that she came to testify. Sometimes Assembly meetings can be fun!

Rick Whitbeck, former Vice-Chairman of the Alaska Republican Party and former partner in the political consulting firm Pinnacle Group, took the job as Field Director for Stand for Alaska. This is the group opposing the Stand for Salmon ballot initiative. Nice work Rick, make sure to keep it high energy!

On Thursday Governor Walker signed House Bill 312, a bill dealing with crime, into law. It deals with things like being able to take out of state criminal history into consideration when determining bail and giving judges more discretion with bail. The bill was meant to deal with some of the issues in the unpopular crime reform bill SB 91. It passed the legislature with only one person voting against it. You guessed it, Representative David Eastman (R – Wasilla). Oddly enough he showed up to the bill signing. Not sure if he was trolling or is a masochist. Maybe he wanted to explain why he voted no. Whatever the reason, this is definitely the behavior of a Loose Unit. But he did not quite earn it this week. 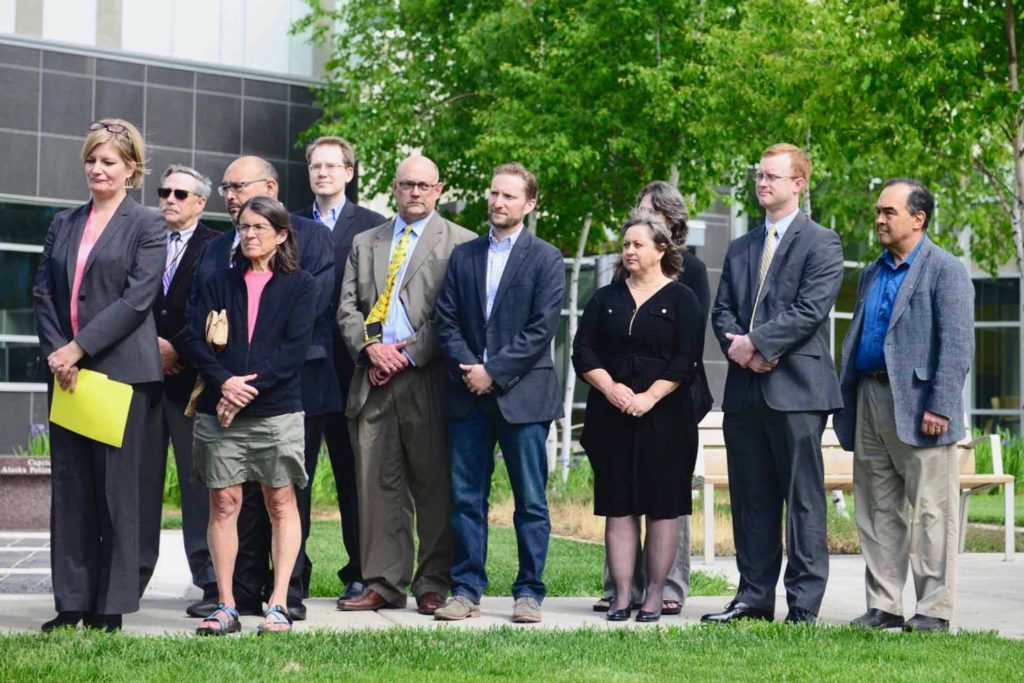 For this week’s Loose Unit we are headed back to the Valley. It’s only a matter of time before every elected official in the Valley becomes the Loose Unit. This week’s Loose Unit is Palmer City Councilwoman Sabrena Combs. Combs won her seat last October in a four-way race for two seats. One of the people she was running against was her husband’s aunt, Linda Combs, who was on the council at the time. Sabrena, along with Brad Hanson, won and Linda lost her seat. That there is already Loose Unit level but what earned her the designation is what happened this week. Hanson recently resigned from the Assembly to take the Community Director position for the City of Palmer. His resignation left a vacancy that needed to be filled. So guess who applied? Linda Combs! Palmer itself is a Loose Unit.

Linda Combs and Kip Bailey both applied for the seat. During the Tuesday (6/12/2018) council meeting Sabrena made it clear that she did not want her aunt Linda on the council. She cited the issue of having family members serving on the council together. She also said she wanted to apply for the Board of Economic Development years ago but did not because Linda told her it would be an issue having family members working together. I guess Linda changed her mind on that one. Linda was appointed to fill the vacancy by a 4-2 vote of the council. One of the no votes was Sabrena. YESSS! Classic Loose Unit move, Sabrena. If Thanksgiving was going to be awkward before, now it ain’t even happening.