The weather has been amazing in Anchorage this week! I hope everyone is out enjoying it. It’s mid-June and a budget has still not been passed, but it looks like the conference committee should finish today. A lot of legislators are headed back to Juneau tomorrow. The special session concludes on June 18 at midnight. Anchorage Mayor-elect Dave Bronson, who is set to take office in just over two weeks, announced some key picks for his administration this week.

The conference committee has continued to do work and meet this week in Juneau. I have always said those conference committee meetings are like North Korea meetings. Everything is done behind closed doors and then they have some show meeting where the decisions are announced with zero explanation. They met this morning with a lot of items on the agenda, including the Permanent Fund. Two major areas of disagreement on the budget are the amount of the dividend and the transfer of money from the earnings reserve to the corpus of the Permanent Fund. The House has no dividend in their budget. The Senate has approximately $2,300, or the amount it would be under Governor Mike Dunleavy’s (R – Alaska) 50/50 plan. The Senate included a $4 billion transfer from the earnings reserve to the corpus of the Permanent Fund, thus protecting it from being spent. The House did not include any transfer. There are many other items of disagreement, but there are two of the big ones. This morning, Representative Neal Foster (D – Nome), who chairs the conference committee, said he wanted to finish today to give legislative legal enough time to draft the new budget, which he said will take 8-10 hours.

While negotiations are ongoing, it looks like the plan to finish today so the House and Senate can vote on the report tomorrow or early in the week. The special session concludes on June 18 at midnight. If a budget is not passed by then, layoff notices will likely start going out. If a budget is not passed by July 1, there will be a government shutdown. Once the conference report is finalized, each body takes an up or down vote to accept or reject it. No amendments are allowed. Twenty-one votes are required in the House and 11 in the Senate. While the report will likely be adopted, there is no guarantee. The House Majority only has 21 members. The Senate voted 12-8 for a $2,300 dividend. The amount of the dividend, as well as many other variables like abortion funding, could be reasons for a legislator to vote no. Then there is the whole 3/4 (30 House, 15 Senate) issue for the reverse sweep, and possibly the dividend if it is paid out of the dwindling Constitutional Budget Reserve. Talking to legislators, there is not a ton of certainty or confidence on the budget. Many are frustrated that a budget has not been passed yet. Things in Juneau should be very loose this week.

The House Judiciary Committee and Senate Finance held meetings this week on constitutional amendments. The Senate Finance Committee heard from members of the Dunleavy administration on SJR 6, his proposed 50/50 plan for the Permanent Fund. Members of the committee, notably Co-Chair Bert Stedman (R – Sitka), were not happy about Dunleavy’s proposal to take $3 billion out of the earnings reserve to cover projected deficits for the coming years. They were also not thrilled that Dunleavy has proposed no revenue measures to pay for his plan. The House Judiciary Committee heard proposals from Senator Natasha von Imhof (R – Anchorage) and Representative Adam Wool (D – Fairbanks) for their own constitutional amendments for the Permanent Fund. It’s always nice hearing from one of the richest people in Alaska, von Imhof, talk about all of us peasants while making sure her rich friends don’t pay income taxes. Remember when her husband’s company Delta Leasing didn’t pay rental car taxes for years, then got raided and were assessed a huge tax fine by the state, and then made a deal with the state to pay only a fraction of the amount owed, and the deal was not announced until the day after the 2016 primary? Must be nice. She might be one of the worst messengers in the history of messengers.

Anchorage Mayor-elect Dave Bronson announced his picks for police chief, fire chief, and municipal attorney this week. He stayed with Acting Police Chief Ken McCoy, who Acting Mayor Austin Quinn-Davidson appointed as acting chief in April. He chose Doug Schrage, who worked for AFD for 25 years, but has been fire chief at the University of Alaska Fire Department in Fairbanks since 2010, as fire chief. Doug Schrage is the father of Representative Calvin Schrage (I – Anchorage). He chose Patrick “Tito” Bergt as municipal attorney. Bergt comes from the Alaska Oil and Gas Association. He previously worked as a assistant district attorney in Anchorage.

Miranda Strong started a new job as the director of government relations for Calista this month. Congrats, Miranda! She was previously an attorney at Lane Powell. She was also the attorney for the Alaska Republican Party. They are now looking for a new one.

Former Representative Gabrielle LeDoux was formally indicted this week by a grand jury for election fraud stemming from the 2018 election. The indictment included new felony charges that were previously removed. The state is playing hardball as LeDoux won’t make a deal. When asked for comment, LeDoux told me, “I am innocent of all charges. I did nothing wrong. And I look forward to clearing my name.” Government lawyers are experienced at prosecuting DWIs, assault, theft, etc…, not so much election fraud. And LeDoux ain’t making no deal. She also has a really good lawyer, Kevin Fitzgerald. My money is she beats it.

Did you see the bizarre email Representative Geran Tarr (D – Anchorage) sent to members of the Juneau Assembly and the Juneau Chamber of Commerce? If not, you can click here to read it.

I sometimes joke about certain people that will never be the Loose Unit because they are well behaved, and just generally not loose. This week proves that anyone can be a Loose Unit! This week’s Loose Unit is Representative Bryce Edgmon (I – Dillingham). On Tuesday (6/8/2021), Edgmon posted a pic on his official Facebook page about a bill Governor Dunleavy signed into law. The bill, introduced by Representative Sara Hannan (D – Juneau), protects a burial site at Funter Bay from being developed. It passed 31-8 in the House and 19-0 in the Senate. A great example of bipartisan legislation. But what earned Edgmon the Loose Unit designation was what he posted. The text or the picture did not acknowledge Dunleavy at all. Super loose. Dunleavy was actually standing next to House Speaker Louise Stutes (R – Kodiak) in the picture. Going full Joseph Stalin is super loose. I know Edgmon is no fan of Big Mike, but Jesus, completely leaving him out is so loose. Dunleavy was included by the Juneau Empire, and even The Midnight Sun shared it! Look at Edgmon trying to awkwardly hide there. So loose. 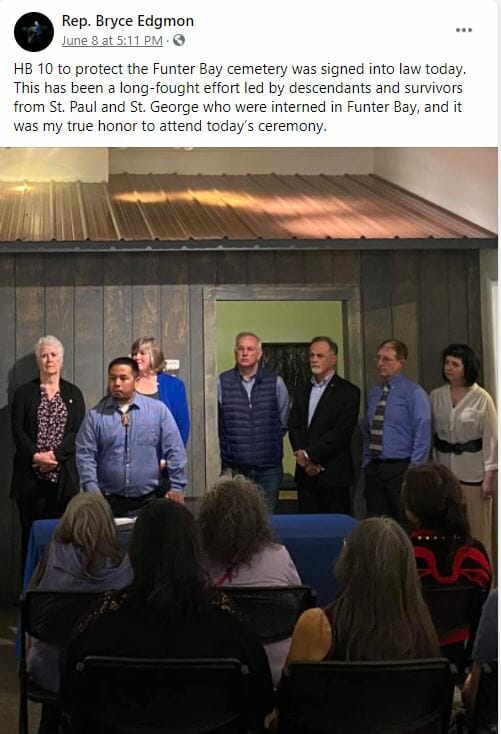 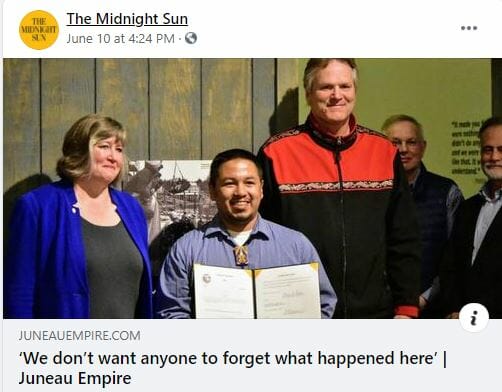 Jeff – Are you kidding? You really missed the mark this week by naming Bryce Edgemon as your Loose Unit. “Going full Joseph Stalin….”? Get a grip. Perhaps you spent too much time in the sun lately and you slipped a cog. Consider a do over for this past week’s Loose Unit pick. Also consider an apology to Edgemon.

Wahhh you should apologize to Bryce for spelling his name incorrectly