With campaign season underway, candidates all over the state are holding fundraisers, knocking on doors, and in some cases, freaking out. Some legislators are experts at looking like they care about their constituents during campaign season, especially when they pick up serious challengers.

A great example of this occurred on Friday (6/8/2018) night. Representative Charisse Millett (R -Anchorage) was posting Facebook Live videos while out on Abbott Loop Community Patrol. There’s a first time for everything! Nothing more motivating for a legislator than picking up a formidable primary opponent. Tick-tock, Charisse.

Governor Bill Walker held a fundraiser on Wednesday (6/6/2018) in Anchorage at a Turnagain home. It was his first fundraiser since switching back to an Independent by petition rather than run in the Democratic primary. About 40 people were in attendance. When talking about Mark Begich entering the governor’s race Walker said, “You don’t always get dealt the best hand, but you have to play the hand you get dealt.” A suggestion to the hosts – open that hot tub next time! 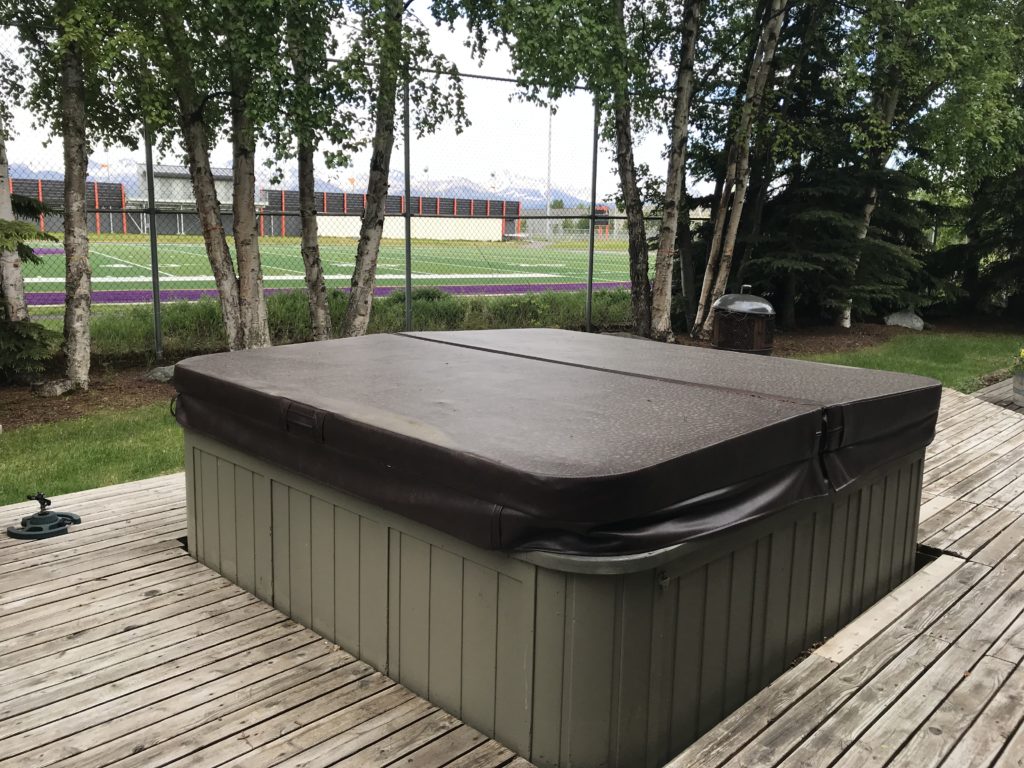 Republicans on the Peninsula

In response to a question about the most interesting thing they did as a teenager, Kevin Meyer said, “Streaking.” As the Aussies would say, good on ya, mate.

In response to a question about the first thing that comes to mind when they think of their spouse, Edie Grunwald said, “A three foot zipper.” Damn!

After the event a woman was overheard saying, “If Edie is not in a rush to get home, she should be.” Pretty much.

During closing remarks Lynn Gattis said, “Don’t forget, LG for LG. I was made for this job.” Kevin Meyer then said, “I don’t have a name like that. All I can say is when you are shopping at Fred MEYER and buying your Oscar MEYER wieners, think of me. Hire Meyer.”

What are they putting in the water in Kenai?

The annual Colony Days Parade took place on Saturday (6/9/2018) in Palmer. The weather was great and there were thousands of people in attendance. Of course, many political candidates participated.

Governor Bill Walker was there and was apparently driving a tractor. He must be practicing for that gasline! Others included state senate candidate Mike Shower, state house candidates Edna DeVries, DeLena Johnson, (I’m sure those two got along great…) Cathy Tilton, candidate for lieutenant governor Kevin Meyer, Borough mayoral candidate Bruce Walden, and congressional candidate Alyse Galvin. Gubernatorial candidate Mike Dunleavy’s campaign participated but he was not present.

Odd that Kevin Meyer participated but not Lynn Gattis or Edie Grunwald, both candidates for lieutenant governor and both from the Valley. They were all in Kenai for the forum on Friday night but Kevin managed to make it down. Is this some kind of Palmer verses Wasilla thing?

The Alaska Support Industry Alliance held their annual golf tournament on Friday (6/8/2018) at Moose Run Golf Course. Tee time was 6 am! Lots of resource development folks participated. I was helping out at the Bloody Mary station. Let’s just say some of the teams were focused on winning, while others were focused on having a good time. The weather could not have been better.

A diverse group of Alaskan organizations from across the state have come together to form the Alaska Gasline Coalition. The coalition’s purpose is to support the Alaska Gasline Development Corporation’s (AGDC) Alaska LNG project.

Definitely some legit organizations and businesses. I wonder if the haters of the project are going to keep hating? In the end, haters gonna hate.

My good buddy Grace Jang, Deputy Chief of Staff to Governor Walker, will be assisting with communications work for AGDC as part of her role with Governor Walker. Grace, if you need any help I’m probably available.

Anchorage Assemblyman Tim Steele announced this week that he will be resigning from the Assembly due to health reasons. We wish him all the best. On Tuesday (6/12/2018), the Assembly will declare a vacancy, which will give the Clerk 60 days to hold a special election. In accordance with the new voting method for the City of Anchorage, it will be a vote-by-mail election. It will be the first vote-by-mail election for an Assembly seat. The recent April election only had mayoral candidates, no Assembly seats were up. The Assembly will also decide on Tuesday if they will temporarily fill the seat or wait until the special election for the seat to be filled.

I would like to again thank Nat Herz and Sarah Erkmann Ward for participating in the Facebook Live event, Landmine Live, we did on Monday (6/4/2018). We had a great time discussing all of the legislative races. Thanks again to our sponsors and everyone that watched. If you missed it, you can check it out here.

And speaking of Nat Herz, he has accepted a new job with Alaska Public Media. His last day with the Anchorage Daily News is June 20. He starts with Alaska Public Media on July 9. He will be covering climate, environment, and energy. Definitely high energy! All the best to him in his new role. No one is more excited than the legislators. He will be leaving a big void in political reporting at the ADN. Bad for the ADN, but good for the Landmine!

Herz told the Landmine, “I had a great job at the ADN and I’m excited about a new one at Alaska Public. The first thing I will do after my last day will be to buy an ADN subscription.” 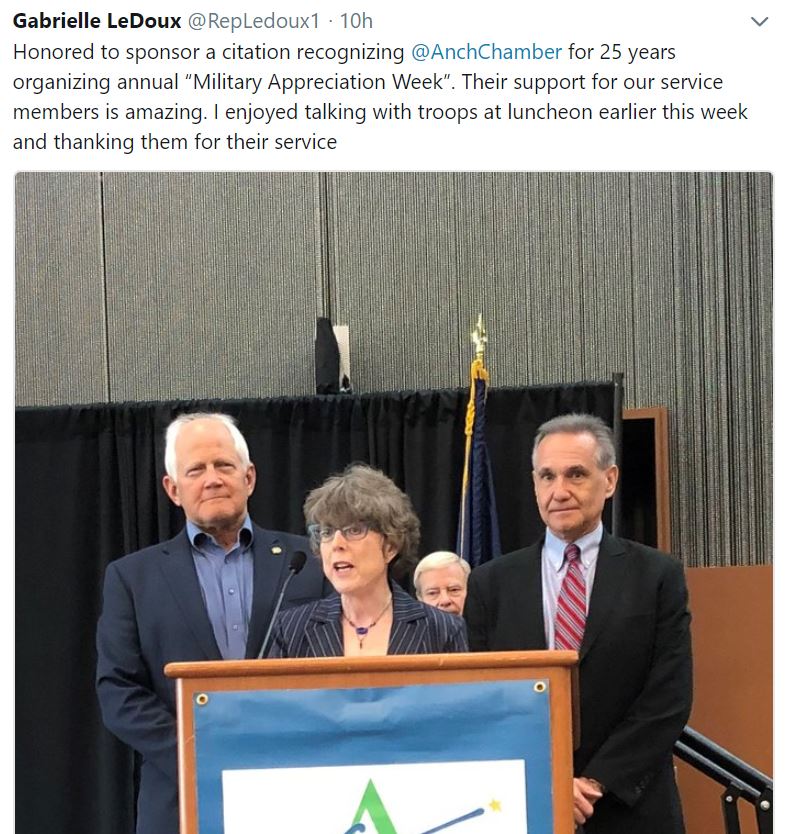 Longtime KWHL morning radio host Bob Lester announced this week that he will be leaving KWHL, and Anchorage, to take a radio job in Dallas. His last show with Chad will be on June 22. 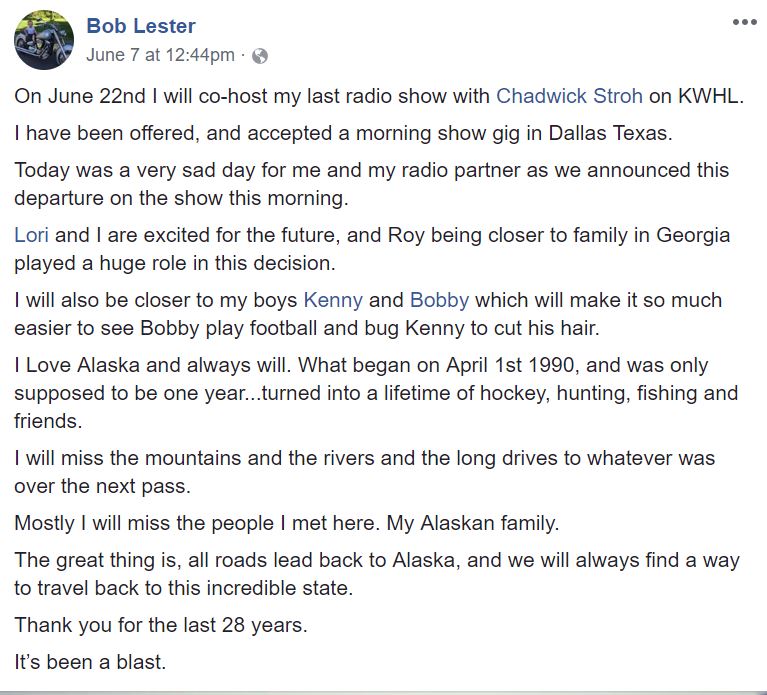 I vividly remember moving to Alaska in August 2004 and hearing him on the radio not long after I drove into Anchorage. Like many Alaskans, I’ve listened to Bob and Mark, and now Bob and Chad, countless times. I also remember him as the unforgettable announcer announcer at Aces games. When the whole speedo scandal went down in 2015, Bob invited me on the show and stuck up for me. I’ve been fortunate enough to get to know Bob over the years. I’m lucky to call him a friend. I wish him all the best in his new job but I, like many Alaskans, am sad he is leaving. Alaska is losing a great voice and a true character.

This is one of those weeks where the winner is clear. This week’s Loose Unit is Representative Les Gara (D – Anchorage). Gara has had an interesting last month. On May 21 he made a Facebook post basically saying he would not run if he found someone to run that he felt represented the values of the District. Not long after, Democrats Zack Fields and Elias Rojas filed to run for the seat. In an email announcing his candidacy, Fields said Gara was endorsing him but added he would drop out if Gara ended up running.

Everyone assumed Gara wasn’t running. But then on June 1, the filing deadline, he filed to run for the seat, confusing everyone. Classic Loose Unit move. Cliff Groh also filed to run as a Democrat that day, making it a four way primary. People wondered if Fields was going to drop out. They also wondered just what the hell was going on in Downtown Anchorage.

Then, just four days after he filed, Gara announced that he was dropping out of the race! Probably not running, running, and then not running, all within a month. This one is up there for one of the best Loose Units since we started this week’s Loose Unit.

Joking aside, I wish Representative Gara all this best. In his 16 years in the legislature he has fought for foster kids and provided a voice for those who often times don’t have one. I have gotten to know Les over the years. While I don’t always agree with him, I have a great deal of respect for him. I will definitely miss watching him drive the Republicans nuts in Juneau.