Another 4th of July has come and gone. The heat and great weather in much of Alaska made this 4th a particularly  great one. There were parades all over the state and, as always, all of them included candidates for office.

The August 21 primary is just over six weeks away. Brace yourselves – radio ads and mailers are coming soon!

Hawkins departure from the race leaves Mike Dunleavy and Mead Treadwell to battle it out in the Republican primary. Well, sort of. There are actually four other Republicans running in the primary. One of them is named Merica, who’s from Romania… Another is Michael Sheldon, who if you have not checked out you should. Trust me on this. Sheldon is running as a team with a guy named Stephen Wright, who is running in the Republican primary for lieutenant governor. Someone should tell them it doesn’t quite work that way. Treadwell will benefit from Hawkins withdrawing but Dunleavy has the momentum. Barring some kind of major event or scandal, Dunleavy should easily win the primary. 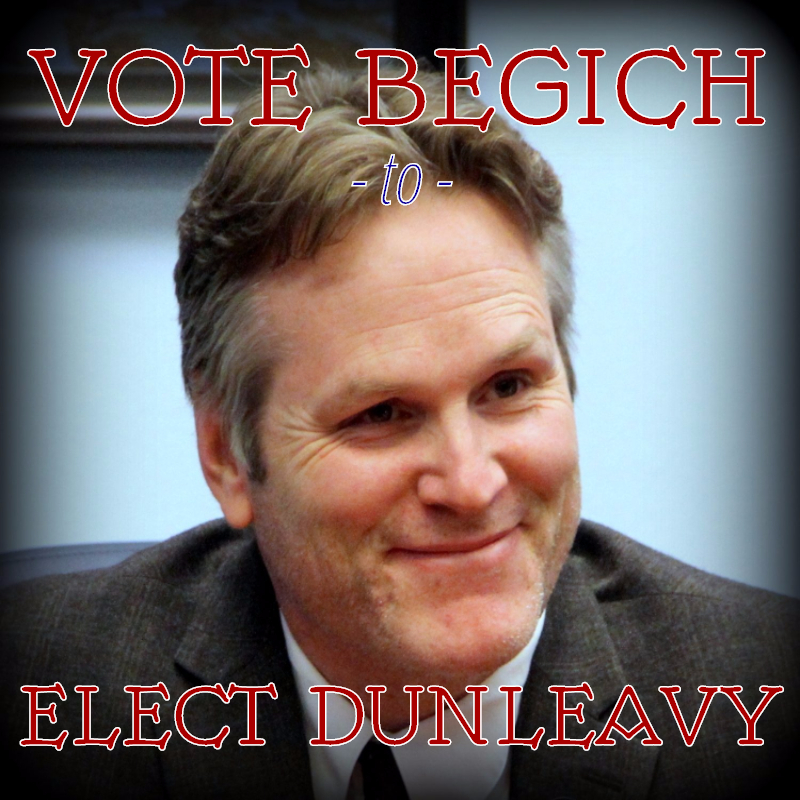 Mark Begich is holding his campaign kickoff fundraiser this Thursday (7/12/2018). He has an impressive list of big name Democrats listed as co-hosts. Some names oddly absent from the list are many members of the Democratic led House Majority. The only members listed are Representatives Geran Tarr (D – Anchorage) and Harriett Drummond (D – Anchorage). Walker has triple that in the House Majority publicly supporting him: Representatives Jason Grenn (I – Anchorage), Andy Josephson (D – Anchorage), John Lincoln (D – Kotzebue), Adam Wool (D – Fairbanks), David Guttenberg (D – Fairbanks), and Jonathan Kreiss-Tomkins (D – Sitka) . Looks like the rest of the House Majority is waiting it out before they decide who they will publicly support. Imagine how awkward some of their caucus meetings must be. 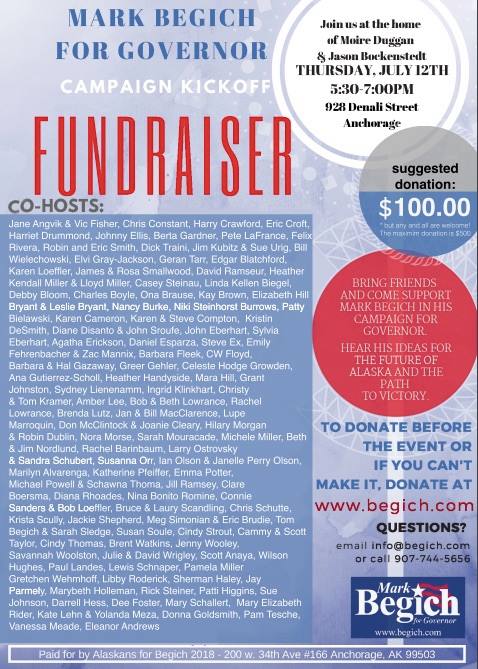 The last day to file for the West Anchorage Assembly special election was July 3. Ballots get mailed out on July 17 and must be postmarked by August 7, election day. This will be another vote-by-mail election. Here are the candidates: 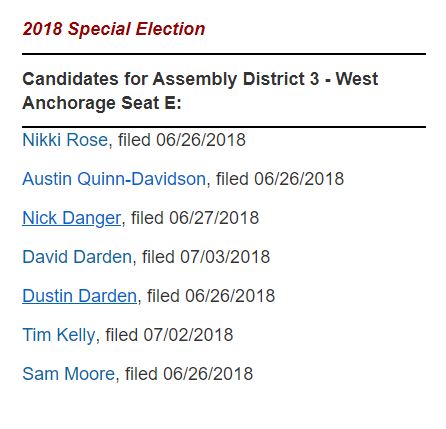 I have no idea who Nick Danger is but the guy seems like a legend. The email he listed on his declaration is [email protected] I really hope this is him! I wonder if he is related to Carlos Danger?

Everyone’s favorite candidate, Dustin Darden, is also running. He is also currently running as a Democrat for House District 22 and he ran for mayor in the April election. Guarantee he gets elected to something someday.

The real race seems to be between Austin Quinn-Davidson, Sam Moore, and Nikki Rose. Quinn-Davidson has the support of many progressives including Assemblyman Forrest Dunbar. Moore is president of North Star Community Council and was campaign manager for Rebecca Logan’s recent mayoral run. Rose is the president of Sand Lake Community Council and is active in Republican women groups. Quinn-Davidson seems to have the momentum and the advantage as Rose and Moore will likely split the conservative vote.

Check out this letter from Dan Coffey in support of Nikki Rose that was sent to a lot of Republicans this week. Tell us how you really feel, Dan.

Representative Dan Ortiz (I – Ketchikan) reportedly had a LOT of people marching with him in the 4th of July parade in Ketchikan. Unfortunately, Republican Trevor Shaw, who is running against Ortiz, had a very low energy presence in the parade, just him and some guy. 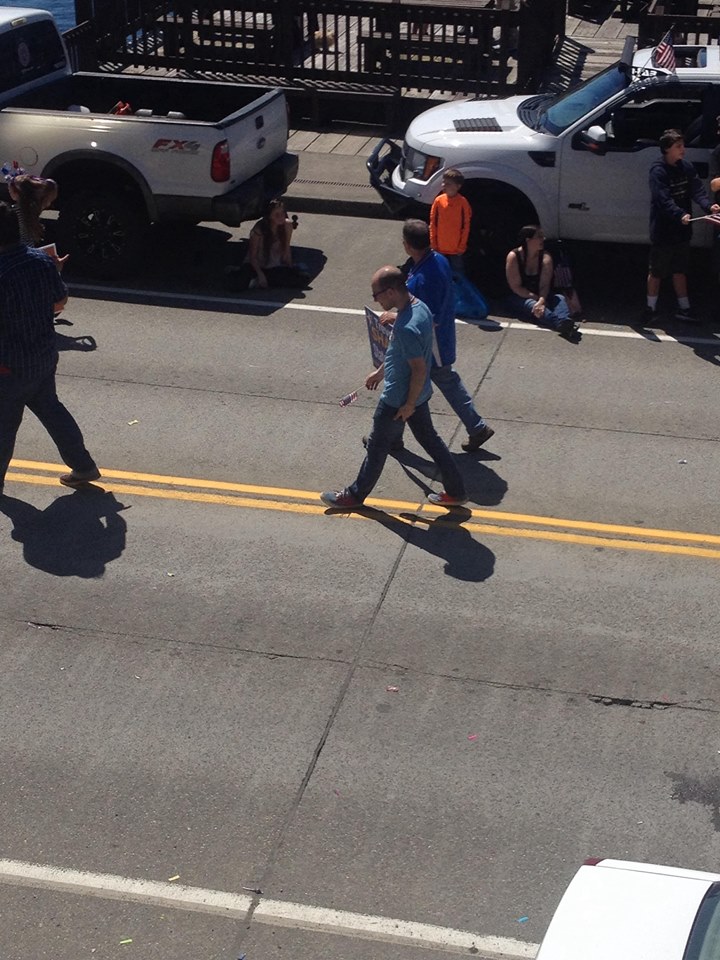 The lone Democrat running, Ghert Abbott, had no presence at all. If this is any indication of how the election will go, Ortiz looks to be in great shape.

Check out the Republican float in the Ketchikan parade. Notice anything missing? Zero Mead Treadwell. All Dunleavy. I guess the rules don’t always matter. 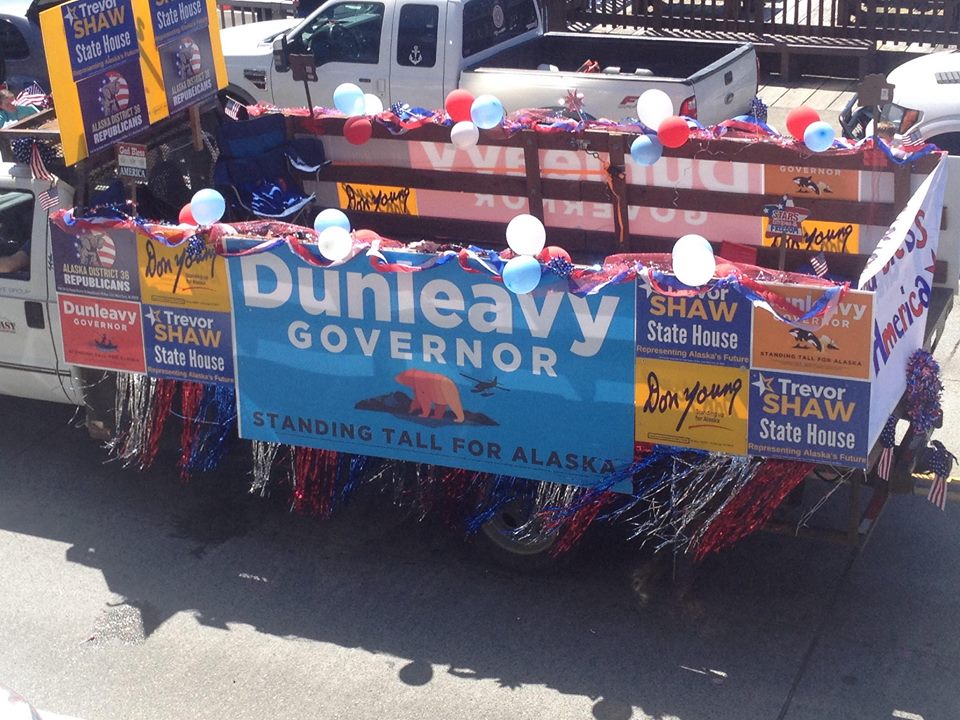 Senator Kevin Meyer (R – Anchorage), who is running for lieutenant governor, had a busy 4th. He participated in the Wasilla AND Chugiak parades. His Valley opponents, Lynn Gattis and Edie Grunwald, were only in the Wasilla one. Kevin really seems to be hustling those Valley voters!

Tonia Baklanova, a Ukrainian immigrant and American citizen, was promoted to Corporate Controller at Calista. She has been with Calista for over seven years and was previously their Treasurer. Congrats on the promotion!

The Walker/Mallott campaign hired Terranova Tasker as their Operations Manager. She has previously worked for the Ted Stevens Foundation and on the Lisa Murkowski and Dan Sullivan senate campaigns.

Alaska North Slope Crude briefly crossed the $80/barrel mark on June 29. This is the first time it hit $80/barrel since November 7, 2014. Legislators have been spotted jumping for joy all over the state.

Jamie Allard, who is running for the Eagle River house seat that Lora Reinbold is vacating to run for the state senate, stepped on a Landmine this week. I posted this article on my Facebook page this week, “AP NewsBreak: US Army quietly discharging immigrant recruits.” As usual, there were a lot of comments. Allard, who has previously served in the military got into a debate with someone about the program in question. The program, Military Accessions Vital to National Interest (MAVNI) has allowed thousands of immigrants to join the military and become U.S. citizens. It has been extremely successful. Here are a few of the comments: 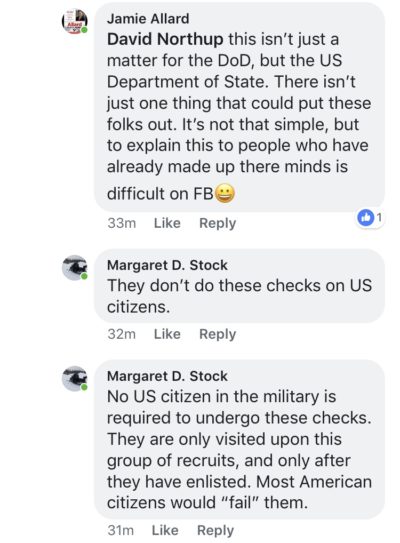 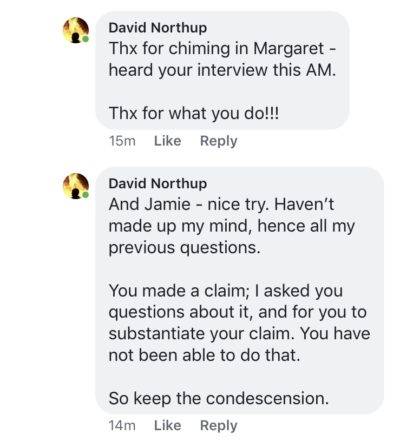 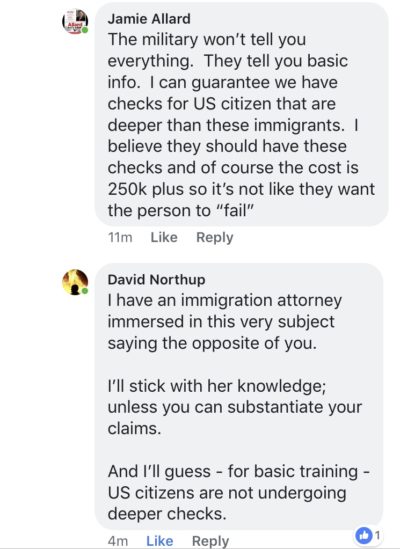 The person Allard was attempting to debate was retired Lieutenant Colonel Margaret Stock, who happens to be an immigration expert and also the person responsible for creating the program. Talk about the wrong person to challenge on this. This would be like me debating fashion with Andrew Halcro. On any other week this would likely have earned Allard the Loose Unit designation but this week the winner was WAY better. 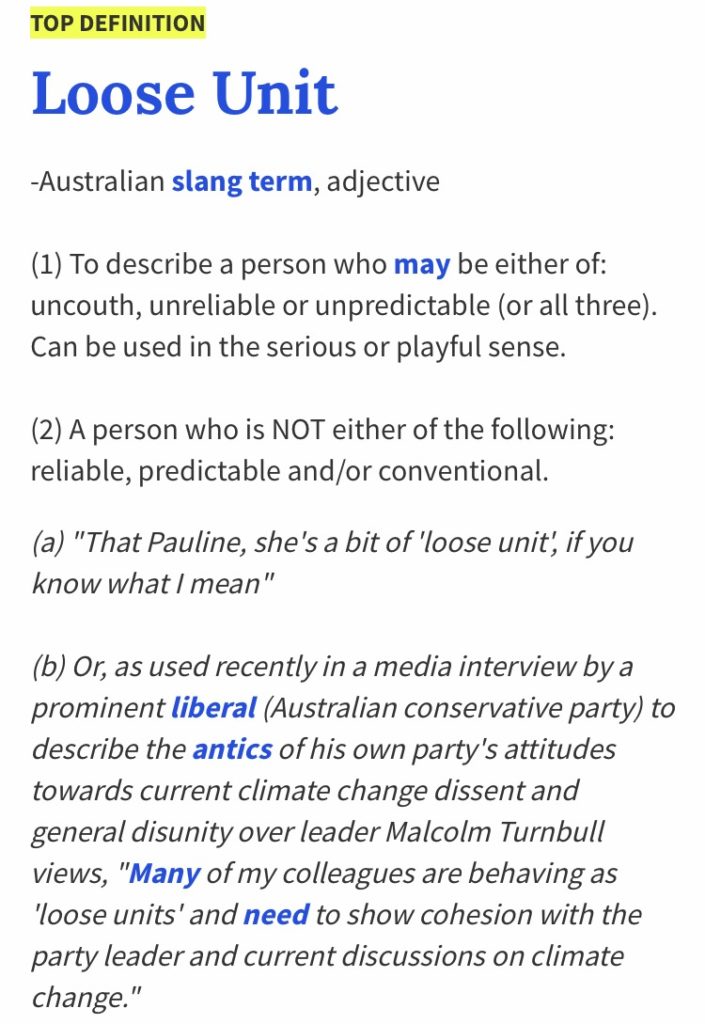 I love the weeks where the winner is as clear as a summer day in Alaska. This is one of those weeks. In fact, we even have two honorable mentions that are directly related to this week’s winner. This week’s Loose Unit is Julie Willoughby. Willoughby is a defense attorney who had quite the week. She was chosen by Governor Walker to fill the Juneau Superior Court seat that Judge Louis James Menendez is retiring from. Well, at least she was for a bit. Not long after Walker called her to give her the news he learned something “disturbing” about a case she had worked on.

Willoughby was the lawyer for Ty Alexander Grussendorf, the son of longtime legislative staffer Tim Grussendorf. Ty Alexander Grussendorf was charged with sexual abuse of a minor in 2015. His trial is scheduled to start in October. Grussendorf allegedly sexually assaulted a 12-year-old girl when he was 18. Willoughby argued, and I’m not making this up, that sexual assaults perpetrated against a 12-year-old girl by an adult man were a “mutually satisfying sexual adventure” and that the child had not been harmed. Talk about a Loose Unit!

As an aside to all of this, Grussendorf’s dad, Tim, while working as a staffer tried to get the age of offenders changed from 16 or older to 19 or older, with the age of the victim being lowered to younger than 12 instead of 13. Very convenient for his son. He was later investigated for unethical behavior for trying to get a law changed that would benefit his son. Another Loose Unit.

When Walker learned what kind of Loose Unit he was dealing with he decided to rescind the appointment. He called her back to let her know. It had not been made public at that point. But in classic Loose Unit fashion she started telling people in the legal community, and likely the press, about it. This caused the story to come out, which in turn resulted in Walker issuing a press release about why he changed his mind. If she had not said anything it likely would not have been a story. You would think of all people a lawyer would know when to keep their mouth shut. But we are dealing with a Loose Unit here.

But there’s more. The Alaska Judicial Council sent Willoughby’s name, along with others, to Walker; Judicial Council reviews applicants for judge seats and then sends names to the governor to choose from. Not only was Willoughby’s name sent to Walker, she was sent as the highest ranked name! How is that even possible? This earns them an honorable mention for this week’s Loose Unit.

And this would not be complete if we did not mention Alaska Republican Party Propaganda Minister Suzanne Downing. She is the second honorable mention for this week’s Loose Unit. When Downing learned that Walker had changed his mind on Willoughby she immediately went to work  She wrote an article claiming that Bruce Bothelo had got to Walker and convinced him to change his mind. Must be awesome to just make stuff up and masquerade it as news. But this is what Loose Units do. She inferred it was a corrupt act because Walker did not choose the top ranked, and therefore the most qualified person. Very loose. Then the story came out. Most rational people would have assumed she would have taken down her article or maybe posted a correction. Nope. In classic Loose Unit fashion Suzanne doubled down. She does have a job to do after all. The Loose Unit wrote another article talking about the ethical obligation defense attorneys have to defending their clients.

How much does Suzanne Downing hate Bill Walker? Answer – so much that she actually argues that Walker made a mistake by not appointing someone a judge who argued that a 12-year-old girl could have a “mutually satisfying sexual adventure” with an adult man. Imagine what she would have written if Walker did not change his mind and Willoughby was appointed? Her article would probably be titled “Walker appoints judge who believes adult men can have sex with 12-year-old girls.” Talk about a Loose Unit!

People are tired of Fake Parade Politicians..The media is also slanted toward the money candidate. Lets sit back and let the people have a say. It is about time we have a choice from some one other than the marshmallow candidates who have only come in and then left so quickly. lots of folks will vote for us and you will se a big change in how people are presented during the election cycle. As the top candidate said google me…So I think you have it wrong, We can run together in the primary if people remember your name. It… Read more »

I think it is entirely possible for a talented attorney like Julie Willoughby to present a vigorous defense without suggesting that the a 12 girl was enjoying a “mutually satisfying sexual adventure” with an older predator.