Happy 4th of July! I hope everyone had a good one. The weather in Southcentral was not bad, and judging by the photos, the weather in Juneau and much of the state looked great. A few significant things happened this week. The House was able to get their effective date issue resolved just a few days before July 1, averting a government shutdown. And Anchorage Mayor Dave Bronson was officially sworn in on July 1. Because of the holiday, the column will be a bit shorter than normal this week.

The big news in Juneau was the House was able to muster the votes to be able to pass an immediate effective date for the budget. It got loose for a while when it was apparent the majority and minority did not have an exact deal. In the end the minority gave the votes for the effective date in exchange for a commitment for a working group on a long term fiscal plan. The working group will most likely be composed of two members from each caucus, so eight total. The idea is to get to some kind of comprehensive plan or grand bargain in the August special session. But the likelihood of such an undertaking is not great. In fact, many in the Legislature and even some in the administration are pushing for the special session to be moved to September or October. With more tourists coming to Juneau and everyone wanting to enjoy summer, odds are good it will be moved. Keep in mind the House and Senate both failed to pass the 3/4 vote for the reverse sweep and the Constitutional Budget Reserve draw. And now that Governor Mike Dunleavy (R – Alaska) vetoed the $525 dividend the Legislature did approve, there will be a desire to get that fixed. My bet is the special session gets moved to September.

Anchorage Mayor Dave Bronson was officially sworn in on Thursday (July 1) morning. He then held a press conference at City Hall. He announced four directives including a weird one declaring Anchorage a “Second Amendment sanctuary city.” Bronson’s Chief of Staff Craig Campbell announced that he had resigned from the Alaska Railroad board of directors. This came in response to a question I asked about the Municipality’s intervention on behalf of the Flying Crown, who the Railroad sued last year over a land title issue. You can read more about that here.

Bronson then held a big block party at the Park Strip on Thursday evening. There was a live band, food trucks, and a beer garden! It was pretty lit.

Governor Dunleavy held a press conference in Anchorage on Thursday to announce his budget vetoes. More on that in the Loose Unit section.

Mike Barnhill, deputy commissioner of the Department of Revenue, is taking a sabbatical from the State of Alaska. Barnhill has been with the state for over twenty years. He has been a big asset to the Dunleavy administration on pitching Dunleavy’s 50/50 Permanent Fund plan to the Legislature. He has served in several state positions including acting revenue commissioner and assistant attorney general with the Department of Law. He’s one smart cat. His departure is going to be a big loss for the administration.

This week’s designee might be the most glaring Loose Unit since the weekly Loose Unit started in January of 2018. This week’s Loose Unit is a shared between Neil Steininger and Caroline Schultz. Steininger is the director for the Office of Management and Budget (OMB). Schultz is the chief policy analyst. These two are the faces of OMB in the Capitol. If you are reading this you are probably aware of the $4 billion fuck up that was made in regards to budget vetoes. The version of the budget that Dunleavy signed in Anchorage and sent to Juneau left out the veto of the $4 billion transfer from the earnings reserve of the Permanent Fund to the corpus. Maximum loose. This was pointed out to me on Friday afternoon.

Oh my holy god. @GovDunleavy forgot to veto the $4 billion transfer from the earnings reserve to the corpus in the transmitted budget. The veto shows in the mockup from OMB, but not in the actual budget signed and sent to the Legislature. This is maximum loose. #akleg pic.twitter.com/p8a4ZWHQjF

Dunleavy specifically mentioned this veto at the press conference on Thursday. He stated, ““There was a decision by the Legislature to move billions of dollars from the earnings reserve of the Permanent Fund into the corpus of the Permanent Fund. We stopped that from happening with a veto. We want to be able to have the greater conversation with the Legislature here in a month to come up with a compressive approach to dealing with the Permanent Fund. And so we see this money as part of the discussion.” Super loose. But it gets even looser. Dunleavy’s office then came out and said it was an error which had been corrected. But the Legislature is saying the signed version of the budget without the veto stands. The signed budget on the Legislature’s website still shows the $4 billion not crossed out. And it gets even looser! This page of the budget missing the veto, page 138, was actually the second version of that page. In the first version, they forgot to leave $8.5 million from the vetoed dividend. This money is the for the salaries of employees of the Permanent Fund Dividend Division. You can see it is there in the signed version and the $4 billion transfer is not crossed off. So, in either version there is an error. Talk about loose! 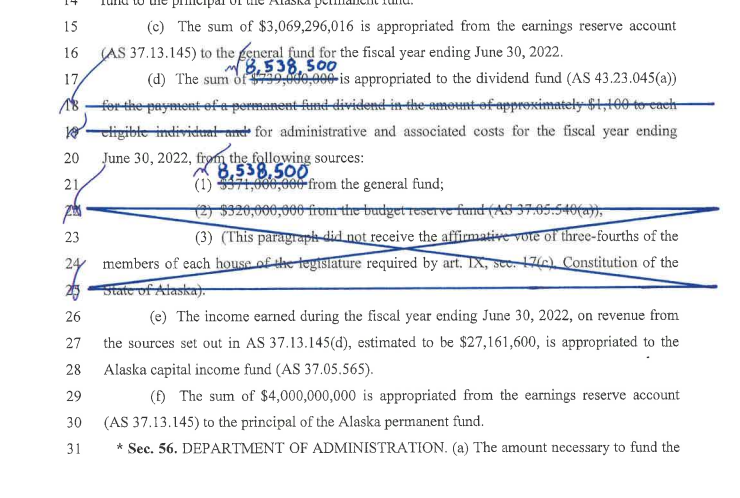 I can’t see the special session being postponed to September or October. For one thing, the PFD is supposed to be paid in early October. But the governor vetoed all PFD funding, so now if there’s a delay there won’t be time to correct the PFD and get one ready to distribute.

I’d say it probably was done on purpose , I’m so sick of this political crap . Get rid of them All .

Get rid of the PFD. Roll the PFD into an account that invests in Alaska infrastructure and end the political grandstanding over a check that is used for little more than flatscreens at Costco.

Oh Areola
You nippleless tit.
This money is put in an account for my daughter to help pay for college.
Ours goes to help with her schooling.
Who cares where or how people spend Thier money. I imagine you are like Halcro and Von Immhoff.
A wealth spolid brat.

What good is a college fund if our universities are gutted? Let’s say the PFD is $2k for 18 years and you dump all of it into a 529. That gives you $36k. Enough for a single year of college in a lower 48 school. Wouldn’t a better investment for your daughter be funding a good university that residents can afford to go to?
Also … “Their money”? And you call me spoiled?

Areal,
You need a lesson in compound intrest. To date her account is$23,235.67. 12years old. Universities are in demand from a world wide audience. They are not gutted. UAA is a second rate school.
Gutted if you will. It’s our money from oil wealth royalties and compound intrest.
Thanks for your rebuttal.

My estimate stands. If it’s 23k at 12 years old it will be roughly 36k at 18. Sure some interest will accumulate- but likewise PFD amounts will continue to decline. That’s a single year of college.
And I agree UAA is a second rate school… that’s why we need to fund it. We should keep public money in-state instead of investing in outside universities.

If the State paid out the amount owed to my child that amount would be $6000+ additional. The price of oil is going up and the interest made on the PFD is increasing also ,not decreasing. Wind and solar will never replace oil. UAA is a dying horse. Glue time. Putting in more to keep it going is a waste of our money. Now Sean Parnell runs this diaper.

“The SOA” doesn’t “owe” your child, or anyone else’s child, money for a college education. Constitutionally, the SOA owes every child in the state access to a first rate K-12 education. Our schools used to do just that. Now we are in the bottom of state rankings. We’re not paying for the best and brightest teachers, we’re not training teachers at our universities and we are not incentivizing teachers with desirable health care or retirements benefits. Our Governor and legislators continue to strip school funding and weakening our public schools. See how that works out for your daughter chances of… Read more »

Old timer
We pay for two schools. Public and private. Tax money taken to support the failing system and expectation driven private. We choose to spend our wages in this manner in order to alievate the disappointment of the NEA system of bottom of the barrel.
No one owes us shit but the PFD is 3/700000 ours.

Jeff, you’re picking on Caroline of all people? Did she reject your advances and this is how you get back at her? You didn’t even really describe how she factors into the drama. You’re just mad at her for some reason but it doesn’t take a rocket scientist to figure out why.

Omg a virtue signaling white knight sticking up for Caroline! It ain’t worth it bro, trust me!

More than likely Hmmmm is Caroline. Trying to deflect accountability by proposing some ulterior motive other than her incompetence. It must be some stalker sort of thing. Couldn’t be that she dropped the ball.

Yes, that is the most likely and simplest explanation. Not unexpected at all!