Summer is flying by. June is over and the 4th of July is almost here. Alaskans will be celebrating at lakes, cabins, parades, and BBQs all over the state. A reminder from the Landmine – if you are going to be drinking, as most of us will be, don’t do it while driving or boating. It’s not worth it. Other than that, have an awesome time!

Tomorrow (7/2/2018) is the deadline to withdraw from the primary election. The Landmine is calling it pull out day!

It’s not been a great week for Bill Walker. First, the Alaska Correctional Officers Association released a poll that shows Bill Walker in third place in a potential match up against Mark Begich and Mike Dunleavy. You can see the press release and poll here:

Second, former Governor Tony Knowles endorsed Mark Begich for governor. Third, Senator Bill Wielechowski (D – Anchorage) sent out a press release criticizing Governor Walker for not agreeing to issue an executive order regarding net neutrality. You can see a portion of it below. It appears that Begich is working hard in the background to have prominent Democrats either endorse him or attack Governor Walker. An email was sent out to many Democrats this week from a person named Sean McGuire. It’s long and critical of Bill Walker. There is no paid for by on it. I found a Sean McGuire on Facebook who lives in Fairbanks and has a lot of Democrat friends. I messaged him to see if he wrote the email but did not hear back. This strikes me as the classic third party attack with no fingerprints of the candidate on it. Pretty weak if you ask me. Here is the email. Dude didn’t even spell Begich’s name right. Maybe it was by design lol.

Justin Matheson, Chair of the independent expenditure groups Alaskans Against Dunleavy and Alaskan Workers for Treadwell, was in town this week. He was spotted at Steam Dot in Sears Mall meeting with former legislator and lobbyist Mike Szymanski. Very swampy. Matheson lives in Washington state and works for the political consulting firm Axiom Strategies. No word yet on who or how much money is behind the groups but rumor is it’s some serious people with money.

Ever heard of Poe’s Law? According to Wikipedia it’s defined as “An adage of Internet culture stating that, without a clear indicator of the author’s intent, it is impossible to create a parody of extreme views so obviously exaggerated that it cannot be mistaken by some readers for a sincere expression of the parodied views.”

There are a lot of elected officials and political folks who should get familiar with Poe’s Law. This week we posted this Alaskans Against Dunleavy parody ad on Facebook and Twitter. We even made it clear it was a parody. A lot of people, including some elected officials thought it was real. #Fail The Mead Treadwell campaign announced this week that Mike Robbins has been hired as campaign manager. Robbins is a longtime radio manager and served as the Field Director for Trump’s campaign in Alaska. Mike actually sent out the press release with the announcement. Pro tip Mike – don’t send out press releases in Word format, send them out as a PDF.

Mike Dunleavy seems to be benefiting as Begich seems more concerned with going after Walker than Dunleavy at this point. It’s pretty awkward for a lot of progressives who are deciding whether to support Begich or Walker. There is a lot of talk that Republican gubernatorial Scott Hawkins might get out of the race. He has been absent from several recent debates and forums. That would leave Dunleavy and Treadwell (and that bizarre Micheal Sheldon character) in the Republican primary. This would help Treadwell by consolidating the anti-Dunleavy vote. But it seems too little, too late for Treadwell. The primary is less than two months away and Treadwell has not seemed to gain much traction.

Bill Walker and Byron Mallott held a fundraiser on Thursday at the home of former State Senator Georgianna Lincoln and Chris Cooke. Judging by the pictures it looked like a very big turnout. There were a LOT of prominent Alaska Natives listed as co-hosts. I actually got a robo call on my cell from Byron Mallott inviting me to the fundraiser. First time that has ever happened. Byron, I would prefer if next time you actually call me.

Representative Lora Reinbold (R – Eagle River), candidate for state senate, and Edie Grunwald, candidate for lieutenant governor, held a joint fundraiser at Yes Bistro on Thursday (6/28/2018). There were around 40 people in attendance, including conservative radio host Rick Rydell. When I got there Reinbold and Grunwald were taking questions. One guy, I think he was Korean, said he did not have a question but rather a solution. I couldn’t hear him that well but I think he said we need to start burying criminals in the landfill! Must be the North Korean solution. As I was leaving I saw this Kevin Meyer sign knocked over. Coincidence? I think not. Eileen and Leon Van Wyhe held an event for Interior and statewide Republican candidates at their Fairbanks home this week. Eileen is the daughter of former Governor Frank Murkowski and the sister of Senator Lisa Murkowski (R – Alaska). Lots of people were reported to have been there, including Representatives Lance Pruitt (R – Anchorage) and Cathy Tilton (R – Wasilla) (I guess they just showed up because they are big players and all…) and candidates for lieutenant governor Lynn Gattis and Kevin Meyer. Check out these pics! 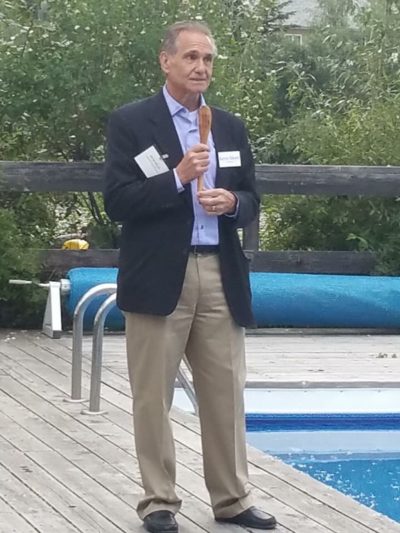 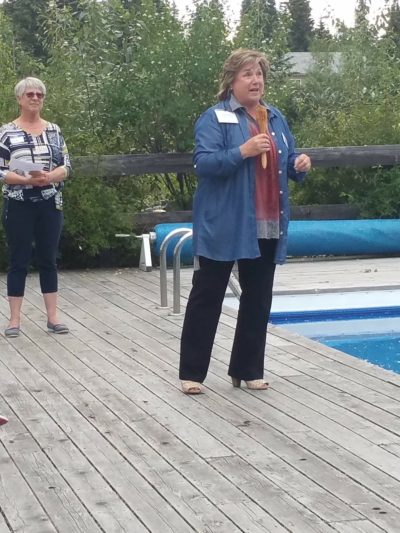 I have no idea why they were talking into a wooden spoon. Your guess is as good as mine. I wonder who the big spoon is? It appears the Van Wyhes have an inground pool – in Fairbanks. Whoa! According to this ADN article, Ronald and Nancy Reagan stayed there on President Reagan’s 1984 visit to Alaska. Then Senator Frank Murkowski owned the home. Check out this part:

“There were some kinks that still needed to be worked out, specifically the water. It didn’t have hot water,” Sen. Lisa Murkowski, Frank’s daughter, said as part of a eulogy she gave in the U.S. Senate for Reagan in 2004.

“A call was made to then-Sen. Murkowski at about 3 a.m. asking how come there was no hot water. As the story goes, the president and my father were wandering around outside trying to figure out how to make the hot water come on. They learned you had to keep the water running for a while,” she said.

Sources have confirmed that Rosetta Alcantra, Vice President of Communications for the Alaska Gasline Development Authority, is no longer with AGDC. No one is saying what happened, which makes me think something went down. I guess we will find out soon enough.

Dimitri Shein, Democrat candidate for Congress, had an interesting week. First, the Landmine received this photo from a Landmine fan from a BBQ Shein held at Balto Seppala Park. Did the Russian buy a Tesla with his campaign money? Awesome! Shein also posted this on his campaign Facebook page this week. It seems he was disinvited to speak at the event because, according to the post, “requests from other campaigns to be allotted speaking time at the event.” Does this mean Alyse Galvin, his primary opponent, demanded time to speak at the event? If so, that’s pretty loose. Dimitri is an immigrant and would have been an appropriate speaker. The whole thing screams of Loose Unit. And it was, until I got a last minute submission that is way better. Update: I was contacted by the Alyse Galvin’s campaign manager, Angela Benander ,after this column went up. She provided me with the following info regarding the Families Belong Together Anchorage event.

Last weekend, Alyse was invited to speak at the Fairbanks Families Belong Together rally on Saturday, but was scheduled to be in Anchorage that day. When I followed up with the Fairbanks organizers to let them know, they said that they had made the decision not to have candidates speak after all.

I then called Anchorage rally organizer Michael Peterson on Thursday to let him know that Alyse was planning to attend the Anchorage rally and asked if candidates would be allowed to speak. I was told that only sitting elected officials would be speaking and that no political candidates were going to be given speaking slots. That was the end of it.

As stated above, Families Belong Together Anchorage and Alyse Galvin were going to be the Loose Unit this week until an awesome last minute submission. This week’s Loose Unit is Alaska Right to Life and its Chairman, Patrick Martin. They posted this on their website and Martin posted it on Facebook on Saturday evening. Just in time to make the Loose Unit! Click here to see the entire thing on their website. 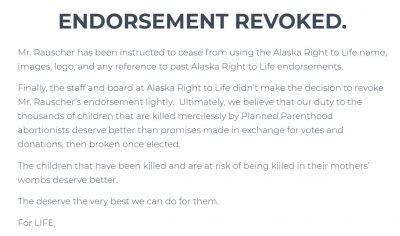 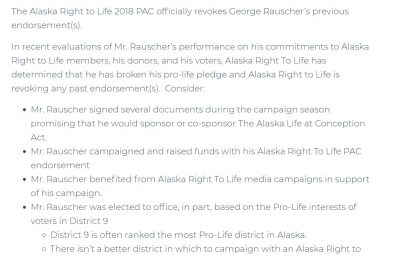 Representative George Rauscher (R – Sutton) is super pro-life. What does one have to do to get the group’s support? Commit to blowing up abortion clinics? I have a feeling this is more about Representative David Eastman (R – Wasilla), who doesn’t like Rauscher, getting involved. Eastman’s PAC endorsed Pam Goode in the Republican primary. Talk about some loose behavior. As a former Loose Unit recipient, Eastman knows what it means to be a Loose Unit.