The halfway point of the “90-day” session is fast approaching, but by all accounts it will go the constitutional 121-day limit – which is mid-May. Senator Lisa Murkowski (R- Alaska) addressed a joint session of the Legislature, the first time since 2019 due to COVID-19. Dividend bills in the House and Senate are generating a lot of discussion about the dividend, something that did not occur until the end of last year’s session. And the price of oil is approaching $100/barrel due to the Russian invasion of Ukraine.

On February 16, the Senate Finance Committee introduced two dividend bills – Senate Bill 199 and Senate Bill 200. SB 199 is a step up approach to the dividend. It starts at $1,100 in FY 2023 (this year) and grows to $1,300 by FY 2025, with an inflation adjustment. It also triggers a 50/50 dividend (approximately $2,500) if enough revenue comes in. But without major budget reductions or significant new revenues, that is unlikely to happen.

SB 200 is a straight 25/75 split of the yearly draw from the Permanent Fund – 25% to dividends and 75% to government. This works out to approximately $1,300 per person, depending on how many applicants there are.

The Senate Finance Committee continues to be divided on the dividend. Senators Bert Stedman (R – Sitka), Click Bishop (R – Fairbanks) and Natasha von Imhof (R – Anchorage) do not support a full statutory dividend or a 50/50 dividend, favoring a lower amount. Senators David Wilson (R – Wasilla), Donny Olson (D – Golovin), and Bill Wielechowski all favor a larger dividend. Senator Lyman Hoffman (D – Bethel) has gone one record for the 50/50 amount, but also seems to support the step up approach. The division in the finance committee, just like in the Legislature, is not among caucus or party lines. Wilson and Hoffman are members of the Senate majority. Stedman and Bishop, fellow majority members, co-chair the committee.

Whatever bill the finance committee ends up passing, it will still need to pass the full body. But it seems clear the plan is for the dividend to be in a separate bill and not part of the budget bill. It also appears the Senate bill will be the vehicle for the dividend even though there are several dividend bills in the House.

Regardless of which bill the Senate Finance Committee passes, it could get altered on the Senate floor. The full Senate is just as divided on the dividend as the finance committee is. And once the Senate figures it out, it goes to the House, which is as divided as the Senate is.

The big difference this session from last session is last year they essentially ignored the dividend issue until the end. This year, they are dealing with it much earlier. With all but one legislator being up for re-election, and this being the second and final session of the Legislature, there is more urgency to get this figured out sooner than later.

What further compounds the issue is rising oil prices. It makes it harder for the legislators who support a smaller dividend and easier for those who support a larger dividend. If oil prices stay in the $90s, or go higher, Alaska will potentially take in billions of additional revenue this year than previously projected. ANS crude has been above $90/barrel since January 26. And with all the instability now due to the Russian invasion of Ukraine, the price will likely go even higher. 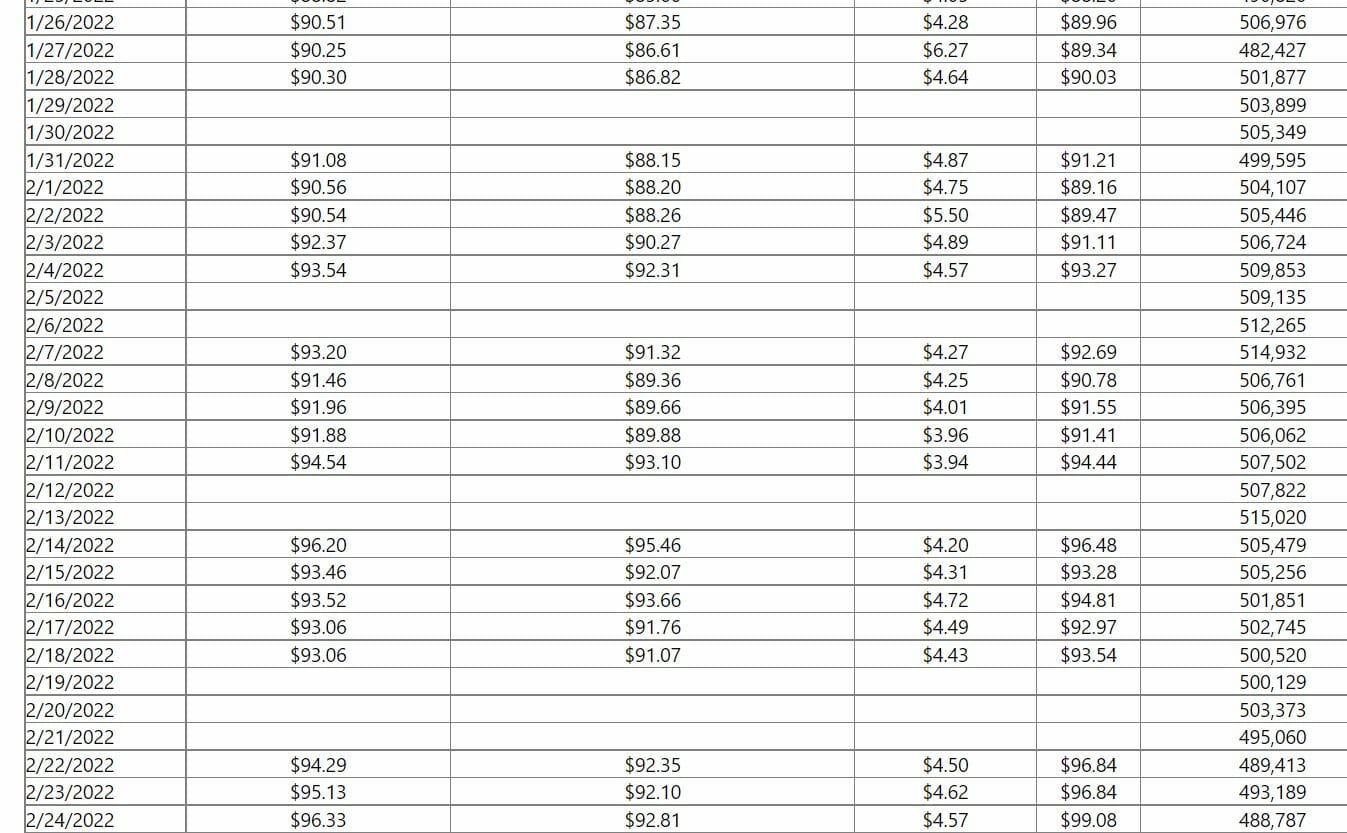 The dividend issue continues to plague the Legislature, but the difference this year is oil prices are significantly higher than previous years. Keep in mind, Governor Mike Dunleavy (R – Alaska) is pushing for a 50/50 dividend, plus a supplemental amount to make last year’s dividend equal to the 50/50. This combined would be almost $4,000 per person. While that is very unlikely to happen, a $2,500 dividend – the 50/50 amount that had little traction last year – could be seriously considered this year. And Dunleavy has the ability to veto a smaller amount and call back the Legislature. Something none of them want during campaign season. I still think it will end up in the $1,600 range, but at this point anything is possible.

Senator Lisa Murkowski (R – Alaska) addressed a joint session of the Legislature on Tuesday (2/22/22). You can watch it here. She spoke mainly about resource development challenges in Alaska and the infrastructure bill. After, she took questions from several legislators and then held a media availability. That evening, she held a fundraiser at the Juneau Tram building that included several big name Juneau business people. She was reported to have raised over $70,000.

Things got intense on the House floor on Wednesday. Representative Christopher Kurka (R – Wasilla), who is running for governor, was attempting to give a special order on “the opposites of North to the Future.” During his speech, Speaker Louise Stutes (R – Kodiak) interrupted him while he said Murkowski has worked towards, “North to dependence and servitude.” It went off from there. After several breaks, and Stutes getting really mad, Kurka basically gave up. Representative David Eastman (R – Wasilla) then chimed in, asking what rule Kurka was violating. Kurka eventually said, “It seems like I’m not allowed to speak, Madame Speaker.” Then he stood there for a few more seconds. Eastman weighed in again, and then there was a long discussion about rules and decorum. Then, after Representative DeLena Johnson (R – Palmer) gave a special order on debate, Eastman wanted to give one too, but the body voted that down – after some confusion on how many votes were needed. Eastman then tried to give a special order on “the constitution.” Then, there was a motion to adjourn, which passed. The whole thing took lasted almost 25 minutes. You can watch it here.

Tuckerman Babcock, the former head of the Alaska Republican Party and Governor Dunleavy’s first chief of staff, filed a letter of intent this week to challenge Senate President Peter Micciche (R – Soldotna). The move came after months of rumors and speculation that Babcock would challenge Micciche. The last two Senate presidents were both defeated – Pete Kelly in the 2018 general by now-Senator Scott Kawasaki (D – Fairbanks) and Cathy Giessel in 2020 by now-Senator Roger Holland (R – Anchorage). But Alaska’s new voting system makes this year’s election different. Micciche would surely have been vulnerable in a traditional party primary (he barely beat Ron Gillham in the 2018 primary). Even so, Micciche will face an uphill battle with Babcock running to his right in the conservative Kenai Peninsula. That race is going to be one to watch.

Republican Rachel Allen filed a letter of intent for House. She lives in the open Mat-Su House seat. Republicans Jesse Sumner and Jessica Wright have also filed letters and live there, though Sumner said he's not running anymore due to his @akgop district position. #akleg pic.twitter.com/SGDl4e9qcj

While all the characters in the House drama surrounding Kurka were good candidates, a late week development made this week’s designee clear. This week’s Loose Unit is Anchorage Assembly member Jamie Allard. On Thursday (2/24/2022), Allard made a Facebook post that included, “Baltic countries will be next. Ukraine has always been a part of Russia.” While Ukraine and Russia share many historical and cultural connections, Ukraine has a checkered history with Russia. And, one small thing, it’s been an independent country since 1991. Very loose. 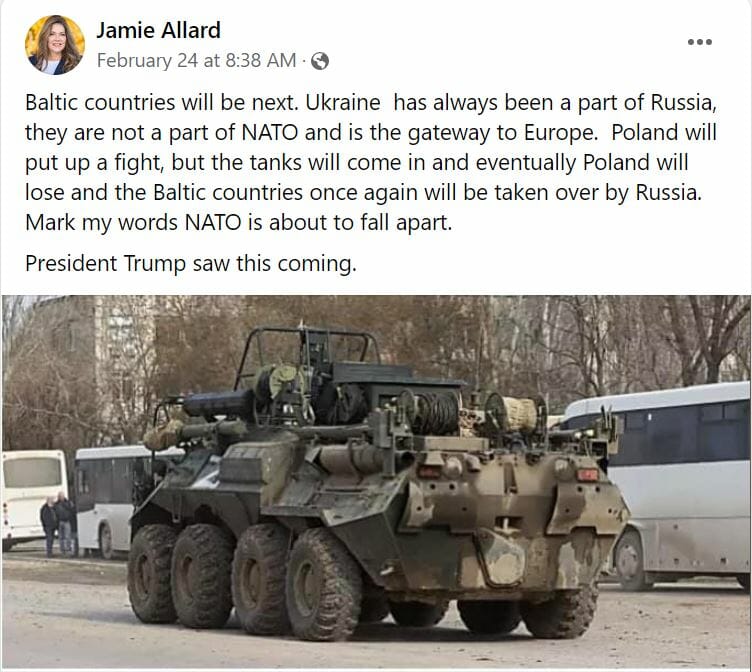 But it gets better. On her website, she states she “Promoted democracy in former Soviet Republics” while at the State Department. Ukraine is in fact a former Soviet republic. It doesn’t get much more loose than that.

Wow! A race to the bottom for loose unit. Anyone who has been in the Army has probably heard the term “shithouse lawyer”. Apparently. they must teach that “skill” at West Point.

All those West Pointers who spoke up against Eastman would challenge your notion stereotyping a group of people based on the actions of one. I’m also against Eastman and authoritarians like him (and Kurka, Allard, Tshibaka, etc.), but you rarely offer anything helpful in your contributions on this blog or in public testimony as you give power to them when you talk this way. You’re just an angry old man and you’re not helping. Be careful with that broad brush you like to wave around.

Jeff, pick up the pace. Allard wasn’t observing, she is promoting. Putin’s maneuvers are her wet dream. She openly advocates for that outcome. Amusing that she left out Hungary, which joined the world in imposing SWIFT sanctions. She is very much in favor of destroying the current world order, except for the part where she isn’t on the negative side of things.

I was willing to give Jamie Allard the benefit of the doubt … for a while. No more! She is the last person who should find herself (or himself) in the Alaska House of Representatives.

Barbara, you were very good to give her a chance. That was kind of you, but all the same it’s good to see that you also know when you see something that doesn’t bode well. She does not belong in public office. You’re absolutely right.

She is clearly ignorant of history and only knows what Trump tells her. One or two books on Eastern European history is all you need to know why the Ukranians are fighting as hard as they are right now.