This is the last Sunday column of 2020. Christmas is over and the New Year is only five days away. In some ways this year flew by, but in others it went by at a snail’s pace. Kobe Bryant died on January 26, 2020. That feels like it was years ago. But the long and arduous nine months of Covid have just dragged on and on. One thing I think we can all agree on is the hope that the first year of the new decade will be a lot more normal than 2020. While the Covid vaccine gives hope for a return to normalcy, Alaska politics are set to be as abnormal as ever. It’s been nearly two months since the general election and the House or Senate have still failed to organize. As one longtime legislator told me, “I don’t understand why people run for office who are scared to lead or make decisions.” The next legislative session is going to be a real doozy.

Even though it was the week of Christmas, quite a bit happened.

The biggest event was a board meeting of the Alaska Industrial Development Export Authority (AIDEA) on December 23 to discuss purchasing ANWR leases. Former Governor Frank Murkowski was invited to talk about why he felt the board should approve $20 million for lease sales. He said they should spend even more than that. After 90 minutes of public testimony, which was nearly entirely against the resolution, the board passed it unanimously. This Alaska Public Media article provides more detail.

The Legislative Council voted 11-1 this week to sue Governor Mike Dunleavy (R – Alaska) over his unconfirmed appointments, which includes Revenue Commissioner Lucinda Mahoney and several appointees to boards and commissions. The legislature passed a bill that extended the time unconfirmed appointees can stay in place until 30 days after November 15, when the his first disaster declaration expired. Normally, appointees are done after the session ends if they aren’t confirmed. But Alaska Statute 39.05.080. Procedure For All Appointments, section B is clear.

Representative Lance Pruitt’s (R – Anchorage) lawsuit challenging his 11 vote loss to Democrat Liz Snyder was heard this week by Judge Garton. Here’s where the case stands according to a local lawyer’s review of the docket:

Pruitt filed an election contest, alleging, among other things, misconduct by the Division of Elections in not developing some system to check absentee ballot signatures following the Alaska Supreme Court’s decision in Arctic Village Council v. State which eliminated the witness signature requirement, but not the voter signature requirement. Pruitt asserted that under Alaska law the Division of Elections were required to develop a system for checking whether a voter’s signature was authentic. On December 22, 2020, Anchorage superior court Judge Josie Garton granted the State’s and intervenor Liz Snyder’s motions to dismiss, ruling Alaska law required no such verification. Judge Garton issued a stay of her dismissal of another of Pruitt’s claims: that the Division of Elections’ movement of a polling station from Muldoon Town Center to Begich Middle School without sufficient notice constituted misconduct. This case is procedurally crazy because of the truncated timeline in which a person must make an election challenge and the tight timelines a court has to make rulings before the next session of the Alaska Legislature starts. I don’t know if Pruitt is appealing to the Alaska Supreme Court.

Governor Dunleavy announced a plan to separate the Department of Health and Social Services, the largest department, into two departments. The original plan was to announce this right before Thanksgiving, but a Landmine tweet about it made them delay that. I was told this by a source in the administration. I knew this was the plan but kept it vague because I figured they would make the announcement the next day. Instead, they waited until right before Christmas! Pretty loose.

Anchorage mayoral candidate Bill Evans is hosting a virtual fundraiser on the 29th. There are some real heavy hitters listed as co-hosts. 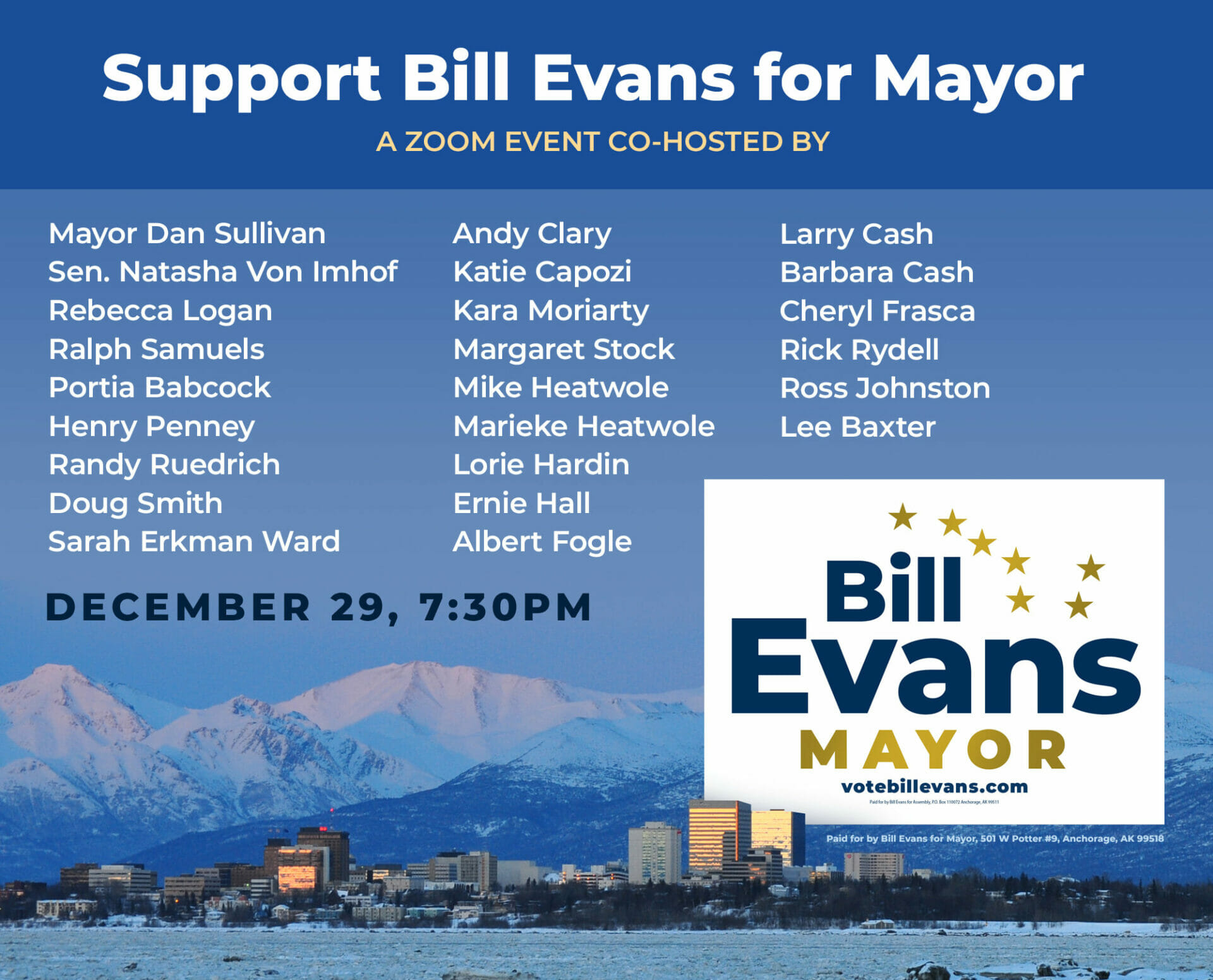 If you missed it I did a Facebook Live interview this week with Dr. Anne Zink! You can watch it here. It will be posted as a podcast soon. We discussed my positive Covid test (still no symptoms), the vaccine, how her job has been the last nine months, and other topics. Big thanks to her for taking the time to talk to me.

Former Governor Sarah Palin did an amazing Cameo video for the Landmine! I especially love her message to the legislature. You can watch below. The Facebook video has a lot more views and comments. She even says she will do a podcast with me! I can’t wait for that. Big thanks for the cameo, Governor Palin!

The Redistricting Board hired TJ Presley as their deputy director. In addition to being real smart, TJ is legend status. TJ and Peter are both good picks for the board. They will surely be missed in the legislature.

In addition to Peter Torkelson being hired as executive director for the Redistricting Board, TJ Presley has been hired as deputy director. Presley previously worked for Speaker Edgmon. Torkelson worked for the Senate Majority. #akleg

This week’s Loose Unit is REDACTED on advice of counsel. Use your imagination!

So Jeff, who are you involved in litigation with that might cause you to receive advice from counsel to redact?

It’s a joke. I am suing the governor over access to press conferences. This week his lawyers moved the case to federal court, making a federal case out of it. Very loose!

I understand. If you are persistent enough you could abandon all scruples and get yourself hired in a state job. Despite our fiscal situation there seems to always be state funds available for one more “spokesperson”, “community relations specialist” or maybe even a seat on the AIDEA board. .

Seems evident that Landfield has already abandoned all his scruples. He runs for office and/or campaigns for candidates while simultaneously purporting to practice journalism, which demonstrates his abandonment of journalistic scruples. Very loose.

When a plaintiff claims a defendant has violated the U.S. Constitution, that plaintiff should not be surprised to have the defendant ask a federal court to hear the suit. Nothing loose about that…except maybe your understanding of jurisprudence.

Please don’t make this quitter relevant. Are you kidding me?

I can tell you Jeff the press freaked out when I asked Senator Murkowski a question at a press conference for Alaska Internet Network during one of her legislative visits. In our first year the Legislature gave me a press pass, I could video on the floor like KTOO, I was denied one every year after that.

The worst censor of information is the media and they don’t like competition.

Good Luck, I hope you break new ground for the independent news voice.

Landfield should never have been issued a press pass. He’s an unethical blogger, not an ethical journalist.