The legislature continues to meet in Juneau as they have, once again, failed to meet the voter mandated 90-day session limit. It appears progress is being made and an agreement between the house and senate on the budget seems close. Once they do adjourn – campaign season starts with a vengeance. Which means lots of great content for the Landmine!

As a reminder, the primary is on August 21. Just a day under 4 months away.

Last Thursday (4/19/2018) the Senate Finance Committee heard public testimony on Senate Bill (SB) 127, legislation from Senator Mia Costello (R – Anchorage) which would effectively repeal SB 91, the much maligned crime reform bill. Lots of Alaskans wanted to be heard on this issue and signed up to testify. Some of the more entertaining folks who testified flat out advocated for vigilante justice. One guy claimed that he goes out and hunts criminals at night. Others said repealing SB 91 would be a big mistake because of the reforms that have been put in place. Whatever your opinion, Costello, and many of the other legislators who are up for re-election this year are worried about what a YES vote on SB 91 would mean at the ballot box. That is what this is really about.

Before public testimony began, the committee heard from Costello and a staffer for around 30 minutes on the bill. Senator Natasha von Imhof (R – Anchorage), a member of the committee, decided to keep it real. She read from Costello’s sponsor statement that talked about “focused dialogue” on the crime problem. Von Imhof said to Costello, “You said start the dialogue. It hasn’t stopped. I’m not sure what dialogue you want to start.” The Landmine approves your statement, Natasha. When asked if she would like to respond to von Imhof, Costello said, “Not at this time.” The next Harvard reunion might be a bit awkward.

The Senate Resources Committee heard HB 130 on Friday (4/20/2018). It’s a bill from Governor Bill Walker dealing with the boundaries of a variety of Alaska game refuges and habitat areas. Seemed pretty straight-forward. Except that the Chair of the Committee, Senator Cathy Giessel (R – Anchorage) decided to change the names of the areas covered by the bill and add “hunting preserve” to them. It is only a name change, not a management change. Hunting is allowed in the areas with the proper license. But Senator Bill Wielechowski (D – Anchorage) was not happy that Giessel just sprung the changes on the committee right before the meeting started, and did not allow for public testimony. Giessel seemed very annoyed that Wielechowski wanted to hear public testimony. The exchange between them got pretty awkward. The substitute passed by a 4-1 vote. You can watch the committee meeting here:

The Conference Committee, made up of three members each from the house and senate, has been meeting to work out a deal on Alaska’s operating budget. Word is they have hammered out many of the points of contention. Once a final deal is reached, the operating budget will go back to both bodies for an up or down vote. The capital budget is another story. The senate hasn’t sent it over to the house yet. But it’s small and relatively simple again this year, so there likely won’t be any disagreement there.

Representative John Lincoln (D – Kotzebue) filed a letter of intent with the Alaska Public Offices Commission to run for the seat he currently occupies. Lincoln was appointed to fill the seat after Dean Westlake resigned amid complaints of sexual harassment and the disclosure that he fathered a child with an underage girl in the 80s. I met Lincoln in Juneau a few weeks back and, I gotta say, he’s definitely a cool cat.

Randall Kowalke is running for the Valley senate seat that Senator Mike Shower (R – Wasilla) was appointed to earlier this year. After Walker rejected the first three candidates submitted by the Democrats, he chose Kowalke, who the senate Republicans then rejected. He has a straight legit Facebook profile pic. That hair tho! Shower broadcast a Facebook Live video this week in which he spoke about the budget and answered questions from viewers. He mentioned the $2 billion plus deficit and stated that an amendment he introduced to reduce the budget by only $1 million failed. Cutting the budget sounds easy but Shower seems to be learning that’s about all it is. This is likely the main reason he opted not to join the Senate Majority (they require members to vote for the budget). But the real question from the Facebook Live event was from me. I asked what the origins of his US Air Force fighter pilot call sign, “Dozer”, are (I’ve called his office multiple times asking to speak with him about this to no avail). He responded by saying, “We’re going to keep that top secret for now. That’s for another Facebook live rant.” So until I hear different I am going to assume the name “Dozer” means he likes to nap. Maybe he fell asleep while flying an F-15. Senator Shower, the Landmine is ready for the exclusive on this important question that many Alaskans want to know the answer to.

John-Henry Heckendorn will be leaving his job at Governor Walker’s office at the end of the month to start his new job – campaign manager for the Walker/Mallott ticket. John-Henry, remember to keep it high energy!

The Landmine got a hold of this recent poll done on the upcoming governor’s race commissioned by the Walker campaign. The big takeaway is the high percentage of undecided voters. The governor’s race is definitely going to be intense. Which is great for Landmine readers.

And speaking of the governor’s race, Republican candidate Michael Sheldon is sure to provide lots of content for the Landmine. I thought the Air Force was behind chemtrails, not NASA. I’m so confused. The Anchorage Assembly certified the recent municipal election on Tuesday (4/17/2018). They also chose Assemblyman Forrest Dunbar as the new Chair and Assemblyman Eric Croft as the new Vice-Chair. Dunbar served as Vice-Chair for the last year. He takes over for longtime Chair Dick Traini. Dunbar making moves.

Democratic candidate for congress Dimitri Shien had an interesting week. First, he failed to file his quarterly campaign disclosure with the Federal Election Commission. As of this writing it has still not been filed. His staff cited technical difficulties but Don Young and Alyse Galvin both managed to file before the April 15 deadline. Shein then sent out this email criticizing his primary opponent, Alyse Galvin, for telling a sad story about her childhood. He then turned around and told his own sad story about his childhood. Yikes! Talk about a rough week. The senate played the house in a softball game yesterday (4/21/2018). The only legislator to play was Senator Bill Wielechowski. A true man of the people. The teams were otherwise composed of staffers from each body. The senate team won 12-9. Is that a metaphor for the budget negotiations?

Things seem to be getting weird for Suzanne Downing over at Must Read Alaska. Check this out: As Andy Holleman put it, “Alaska GOP!! Better than a homicide!!!!” Suzanne, are you ok?

Remember Bracketgate? When some squares from the senate complained about Representative Scott Kawasaki (D – Fairbanks) managing the $5 March Madness bracket pools. Something that’s been done in the legislature, and offices around the country, for years. The Landmine broke the story that whole thing was shut down because of the snitches. I wrote that we would keep the party going by agreeing to pay the winner $100. There has been a development! My Bracketgate source finally got back to tell me that, yes, there was a winner. But, I still don’t know who that is because apparently it’s a staffer who doesn’t like me. Shocker. (Thanks for reading! Whoever you are.) The person actually turned down the prize money. So I told the source to ask the person to choose a charity to receive the money. They didn’t even want to do that! This person must be a lot of fun to party with… Therefore, I have made an executive decision. The $100 will go to the awesome non-profit Alaska Resource Education.

Sara Rasmussen, candidate for State House District 22, got a bit lost this week. She posted this pic on Facebook: Problem is Dimond Tuxedo is in District 23 (my district). To be fair, I think she was referring to the owners living in her district and not the store being located there. But it is hard to tell from the post. Sara, I will let Walter White explain:

While the main targets for each week’s Loose Unit are typically legislators and politicos, any deserving enough person can be chosen. The Landmine may be a dictatorship – but it’s a benevolent dictatorship! In a first for The Landmine, this week’s Loose Unit is a member of the media: KTVA Reporter Daniella Rivera. Rivera has been aggressively covering crime in Anchorage and recently did a special on KTVA called “Catch and Release.” In it, she interviewed an unnamed man, dramatically filmed in silhouette with his face obscured by a hoodie. He claimed to be a drug addict and explained how he beats the ankle monitor the state is using to track him.

Rivera’s recent crime coverage has apparently made her an expert on criminal law in Alaska. On Wednesday (4/18/2018) she put out the following tweet about a credit union employee accused of draining the bank account of a dead man: In the tweet she decided to go rogue and “call it” regarding bail. Classic Loose Unit move for a reporter. But just wait. The Chief of Staff to the Speaker of the House called her out for what she was doing, “editorializing and not journalism.” Rivera dug in. You can see it all here: This was so entertaining I also decided to weigh in – to which Rivera responded. Another classic telltale sign of a Loose Unit. 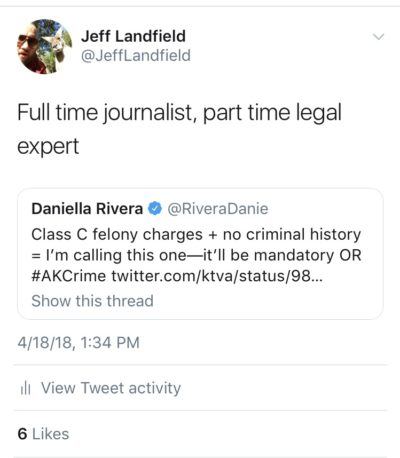 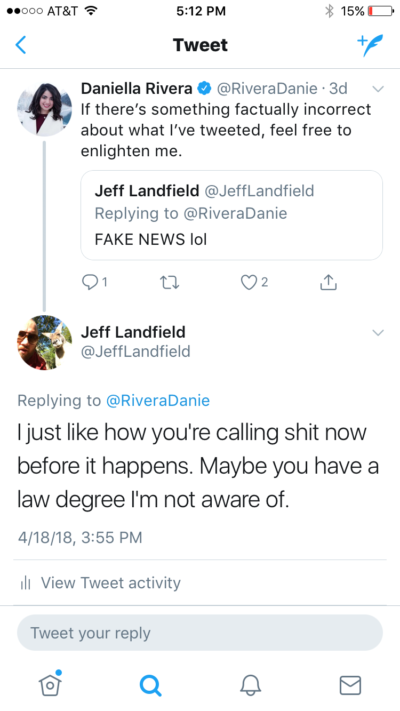 Daniella, as a Loose Unit you seem much more suited for the Alaska Landmine than the actual media. Which I’m told is supposed to report the news, not “call it.” So loose.