The recent racially-motivated lynching threat on Facebook by a man named Russell Holmes, targeted at State Senator David Wilson, should disgust any decent person. One would hope that this behavior would be condemned and disavowed immediately by our elected leaders, but there seems to be a deafening silence. Why are so many willing to ignore such a blatant racist act? Is it because of the individual’s Facebook friends list? His political associations? Threats like this should be taken seriously. 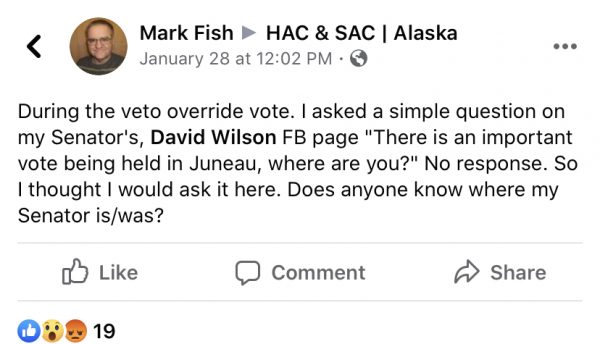 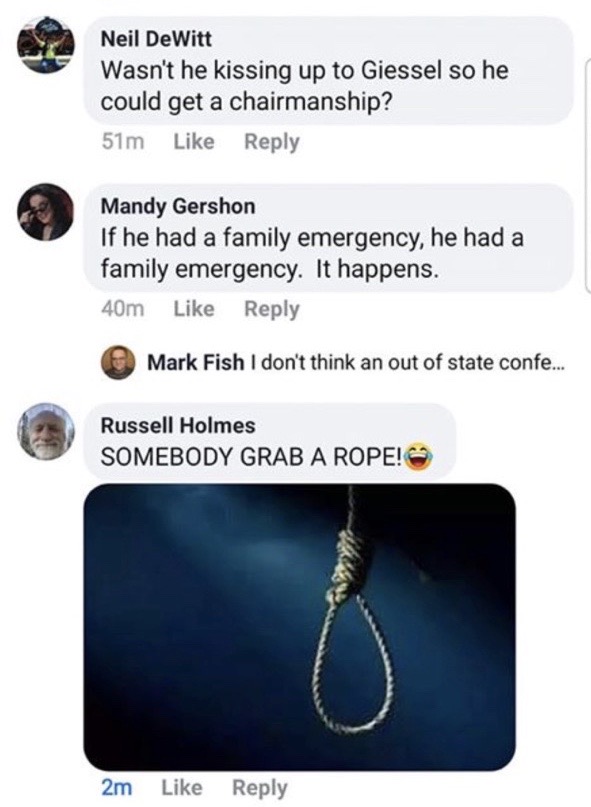 This event provides a great opportunity to start a discussion about unacceptable statements and behaviors in our community. Most black people I know have experienced varying degrees of this type of behavior. While we may share our experiences with each other privately, most of us suffer in silence. Sadly, many of these situations are witnessed by other, non-black people who do not help.

Unfortunately, racism and racially insensitive behavior has existed in every workplace I’ve been part of. Below are several examples from my own professional experience:

Working for the MOA was an up and down experience. While most of the people I worked with never made racist statements or insults, they often stood by and said nothing while the comments or actions occurred. I want to thank the supervisor in the noose incident for his quick and decisive action.

The State of Alaska

The examples above are just a few of the incidents that I am willing to share. You may be wondering why I remember those situations. Each of these situations has caused frustration, anger and hurt. Each of these situations brings a whirlwind of emotions because this type of discrimination has been happening since I was a child. Whether it’s being searched by the police in front of my home or simply walking in my neighborhood from the age of eleven through adulthood, being told by a teacher that people from my community don’t amount to anything, watching through the fence as people from other communities drive to the YMCA in the neighborhood which I lived – that none of us could afford to go to – or knowing people like me were not welcomed to swim at the Mallory Pool in Hampton, Virginia.  It all comes back.

It can be very frustrating when others dismiss the reality of life in the United States. The cold reality is that my two sons and two daughters have been, and will continue to be exposed to this type of treatment for the rest of their lives. My 10-year-old son already has his own “war stories.” My oldest daughter had her first “war story” at 5 years old. I’ve lived my life with purpose. I’ve served my country and my community. I’ve provided my family with a great life and have tried to give back as much as I can. The cold reality is no matter what I do, I will always be “some black guy.”

When these situations occur, I am placed in a tough spot. Do I report it? Do I say something to the individual when it happens? Do I simply look past it and move on?

When situations like this are reported it places every workplace into a state of disarray. Some people will say things like “he’s being too sensitive,” or “everyone gets teased at work,” or “that’s just how Employee A is.” In my experience the accused individual receives some type of write up and continues to work. In the rare event that the individual is suspended, they return to work and you are now expected to continue your working relationship with that person. This creates an uncomfortable situation. Other workers might avoid interactions with you because you’re “too sensitive” or tell you how sorry they are. They explain to you why they are not racist and tell you about their black grandkids, cousins, nephews, nieces, or friends. The workers I appreciate are the ones who don’t change, they continue your relationship the same as before the incident.

If I say something after a racist statement is made it will likely be in anger. Then I am the “angry black man” or a woman in my position would be the “angry head shaking black woman.” Most of us want to avoid this stereotype so we try to never appear angry about anything, even if it’s justified.

The “let it go and move on” approach is the worst. Letting it go just empowers the offender and the statements often get worse. Then, others see that this behavior isn’t punished and then they began doing the same thing. Now you’re the “cool black person.” Things get out of control and you must hear every ridiculous black joke, comment, or “black people question” folks may have. Here’s some advice: if you have a question about black people, just Google it!

I know that writing these things will make some people uncomfortable and defensive, and others will lash out. I know that some of you will read this and start asking questions, either to others or just to yourself, about “black on black” violence, black fathers not being in the home, and all the other normal talking points. To all of you I ask, why does any of that change your behavior?

I am not seeking your sympathy. I am asking that when you see and/or hear racism, please speak up. Make it clear that it isn’t ok. Threatening a State Senator, or anyone for that matter, with an “old fashioned nigger lynching” is not ok.

I will not be silent, will you?

Terre Gales is an Air Force veteran and former police police officer in Arizona. He has worked at the Municipality of Anchorage and State of Alaska. He ran for the Anchorage Assembly in 2016.

Thank you. Your courage on behalf of us all is appreciated. The silence of those in positions of power is deafening.

This article really frustrates me. Racism is a disgusting, abhorrent evil that should he be completely eradicated. I completely and unequivocally denounce what that man commented. But the author goes far beyond denouncing threats of violence. He insinuates that any reference to his ethnicity is wrong. Are we supposed to pretend that DIFFERENCES within races do not exist? There were plenty of examples within his article that seemed like curtual insensitivity at the worst, and even that might be a stretch. Why is it that we can’t celebrate our differences and laugh about them? Are the wounds to fresh? How… Read more »

People don’t make comments about white people like his examples. His examples ARE active racism. We are not any generations removed from it. Do some research on racism and microaggressions and then look for a course on white privilege and try again.

It’s not sharing culture to be threatened with a rope. Look at the photo and see the white people enjoying hanging and burning another human being. This causes generational trauma.

From one white man to another, you need to listen more closely and not jump to the “censorship” argument. That’s not the argument he is making. Of course references to someone’s ethnicity are not taboo. But you need to try and understand that centuries of oppression make these small comments/actions that you think are innocuous to be incredibly harmful. Of course the “are you in with the black church?” comment isn’t as horrendous as being handed a lynch in a bag. One is an insensitive comment, one is a threat against his life. But in the context of his experience… Read more »

By reading your comment, and the answer to your question (“what do I know”) OBVIOUSLY not enough!!!

Hi, I have been working for a Non-Profit Organization for over 8+years. Back in 2012, I reported a racially insensitive comment that was made by a high-rank employee. I was told, “Oh that’s just how he is, he’s always joking like that.” Ever since then I have been looked at a trouble maker! In 2013 I was called into a conference with the CEO and HR, where the CEO asked me “What the Fuck Is Your Problem?” She asked me that because I told HR earlier that the Hi-ranked employee I reported was doing things to harass and provoke me.… Read more »

This was a powerful, elegantly written article which perfectly explains your experiences without malice. Thank you.

What’s even crazier are the blacks that allow such vile things and when someone speaks up the response is I thought they were all friends because they are black….. Can I touch your hair….. They are acting so ghetto….. What is excepted and not excepted the world we live in today…. People have always been assholes it makes a difference who they decide to be assholes too though tbh Why did your mom name you that Oh my best friend is black Can I say that are you ok with what I just said and a long deep breath woo… Read more »

I hear you. Thank you.

I apologize profusely for my insensitive and beyond stupid post. It was meant as a DEFENSE for Senator Wilson as I was using stupid sarcasm to mock Mark Fish and other’s who were badmouthing the good Senator for simply missing a few votes instead of having the courtesy of giving him time to respond. I know he’s a very good man, was sure he had a good reason for leaving Juneau and, really, it was rude and insensitive to call him out as Fish and some others did. And just as I expected, it turned out that he did in… Read more »

Russell, too little too late. You sir need a crash course in how to behave online. Doesn’t matter if something gets deleted on a website or Facebook, have you ever heard of screenshot? Maybe you should stay off social media for a while and remember that what you say online lives forever. If what you are saying is not kind, helpful or true, it shouldn’t be posted at all.

Wow! I had no idea this response was even made. I quit following the thread long ago. Things like this disgust me. I’ve worked in situations where my gender seemed to be an issue for some. So sorry you’re going through this. It’s not fair to anyone.

Love ya, Terre. You and I have discussed a few of these incidents before, and they’ve helped me to stay conscious of the struggles, past and present, that black Americans like yourself have had to endure. Racism dies in the light, and its up to people who care about the future to bring it into light.

“Why are so many willing to ignore such a blatant racist act?”

Sadly with many the reason is evident…acquiescence, fear, or ignorance of one`s racism, helped along with lack of reading, sense of history and lack of education.