Welcome to this week’s edition of The Alaska Stalker, a lighthearted round up of the best and worst of Alaska’s social media landscape. Have you sent us a hot tip yet? Email us at [email protected] and, as always, thanks for reading.

For someone with strong political views, I try my best to play it fair. With a couple exceptions. While I don’t count my sick burns every week, I often find more Republicans in my cross-hairs (ACK! Are you still allowed to say that?) than Democrats. This makes sense as there are more Republican politicians in Alaska than Democrats. For now. That being said, that is not the case this week. Democrats be warned: this week is all you. If you want to change that, send me more tips.

After doing some exhaustive Facebook stalking re: the plastic bag ban, Facebook stalked back and rewarded me with this targeted ad. 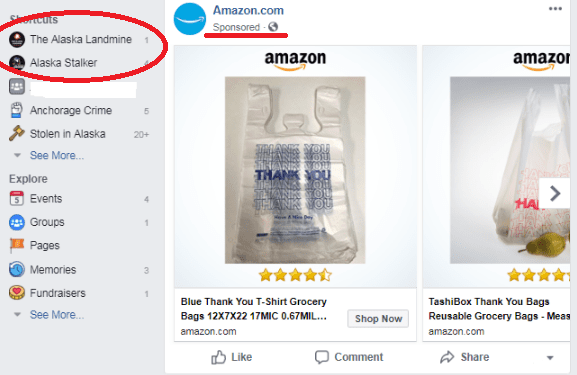 Speaking of bans, I think I have the perfect idea for Assemblymember Constant’s next “banned in Anchorage” item: balloons! The party’s over. Tsk, tsk, tsk Elvi.  We are very #triggered. ?❌❌❌ 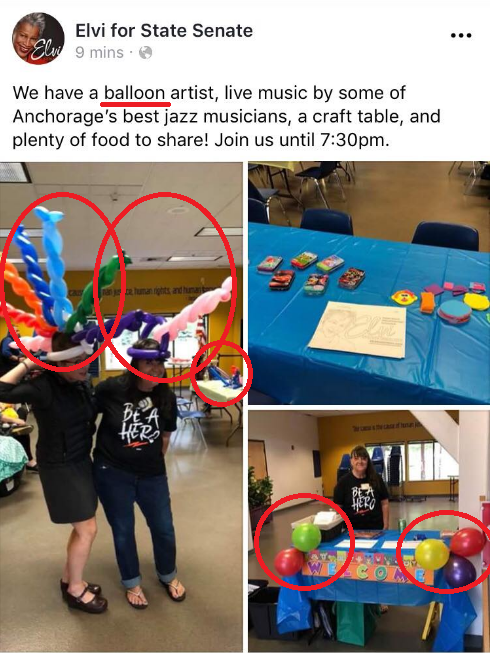 Even celebrities are calling on Senator Lisa Murkowski to vote no on Kavanaugh. 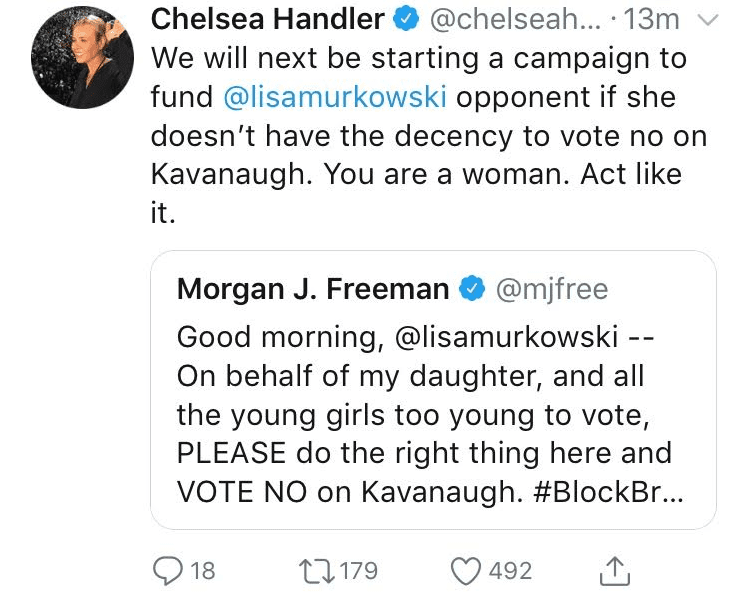 I’m sure Senator Murkowski is paying close attention to this most important issue. Later that day… 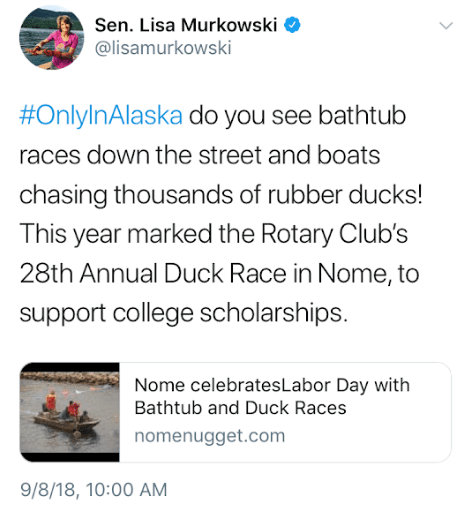 You guys. Who’s going to tell them? We’ll let Dave Stieren take this one. We aren’t that cruel. 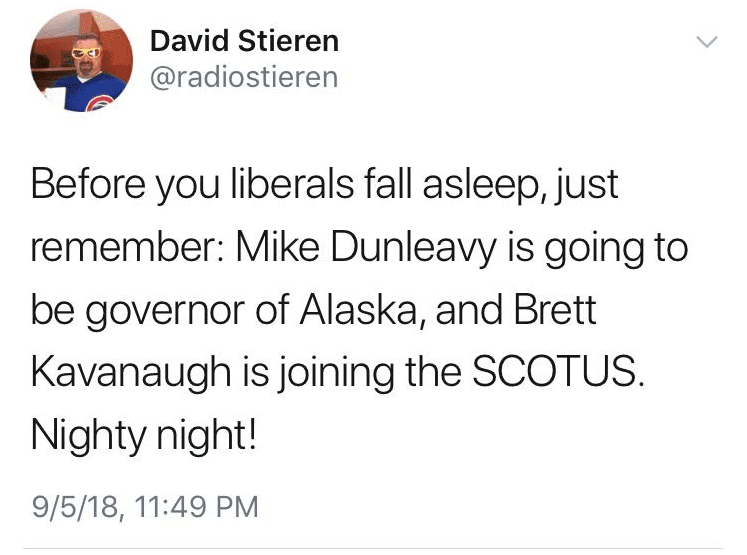 Dave, you forgot to add, “and Donald J. Trump is your President.” 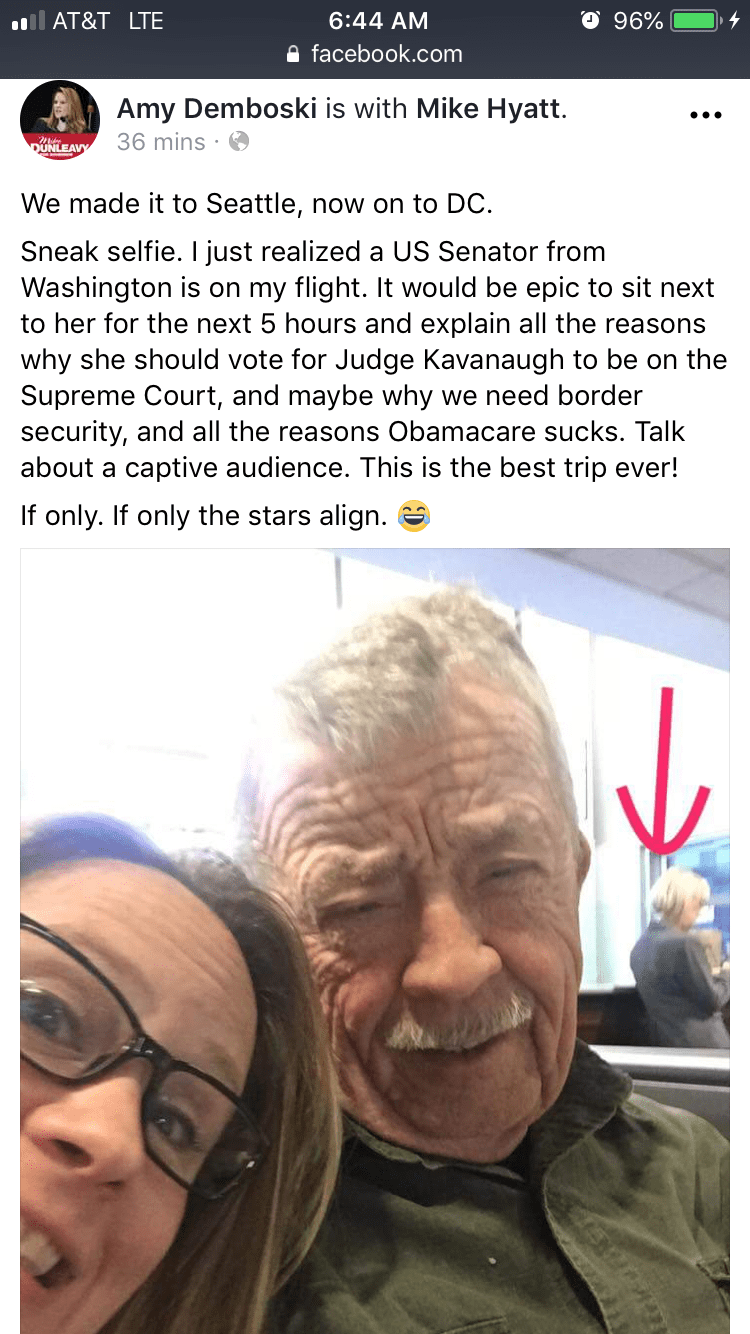 Wait a minute, is Amy auditioning to fill in for the Stalker while we’re on maternity leave next year? She’s really got our format down. Amy, call us! 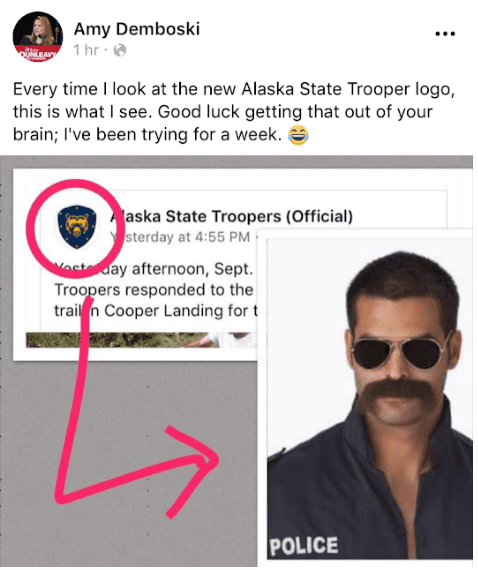 We are living for this amazing photograph from the Juneau Chamber of Commerce Gubernatorial debate via AP. It looks like teeny tiny versions of Senator Mark Begich and Governor Bill Walker are sitting at the kids table fighting over votes. Meanwhile Senator Dunleavy looks as giant as those big budgets he voted for back in 2013 and 2014. 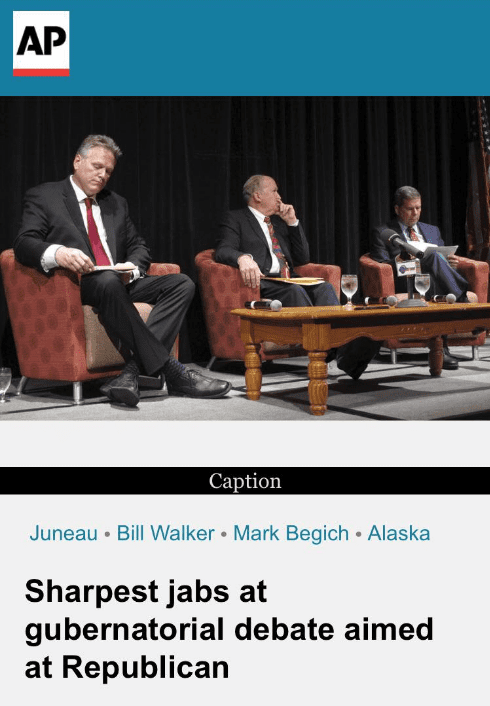 Can someone please show this tweet to POTUS? Honestly, we love all of these answers. They are right on script for all three gubernatorial candidates. That -4 tho. Best line of the night!

On second thought, has Eric been hacked?! This #fakenews/fishing for comments scam he posted is as old as a Nigerian Prince. Also, You’re left of center Eric. Facebook isn’t censoring you. We promise. 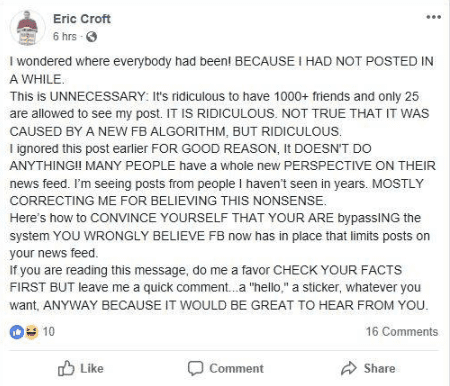 You may have heard the news this week that Gubernatorial candidate, Senator Mark Begich, came out in favor of Stand for Salmon, Yes on 1 ballot measure. 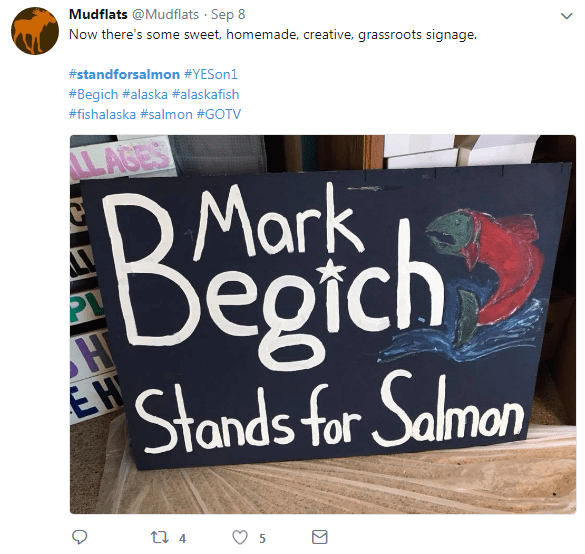 Meanwhile, a top official in the Walker administration, Commissioner of the Alaska Department of Administration Leslie Ridle, has weighed in on another very important seafood issue. No word yet if this is the Governor’s official opinion. 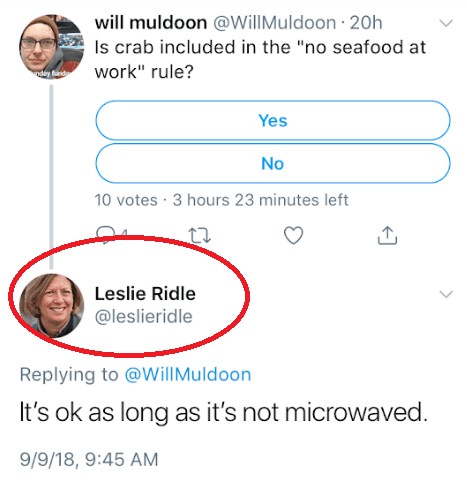 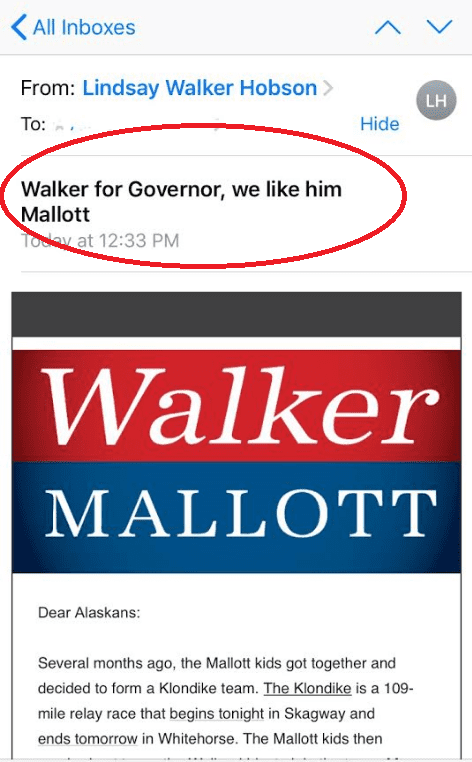 This is a goof, but Governor Walker might want to look into this targeted online campaign strategy. 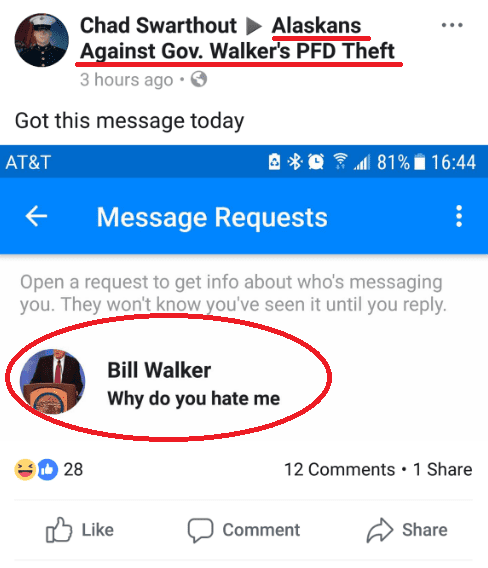 After losing the Republican primary election in District 22, former Representative Liz Vazquez has found a higher calling as a moose mama. According to the comments, Cory from Fish & Game was scheduled to come assess the injury. Fingers crossed for the little one. 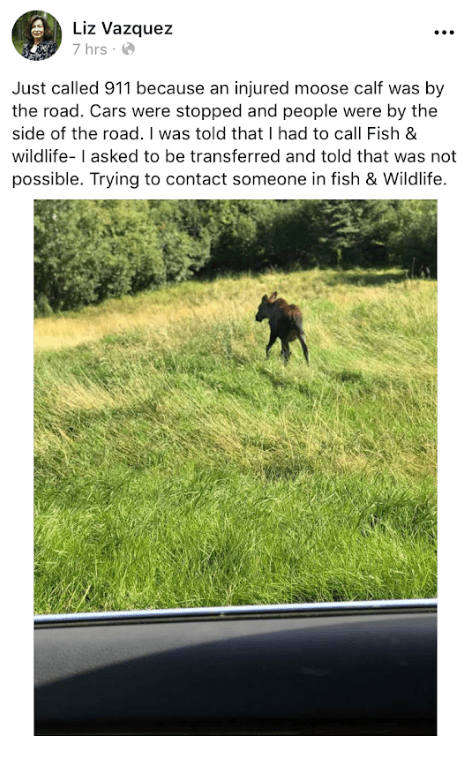 Looks like the Alaska Democrats finally got the memo that candidate for Congress, Alyse Galvin, won the Democratic primary. About time. 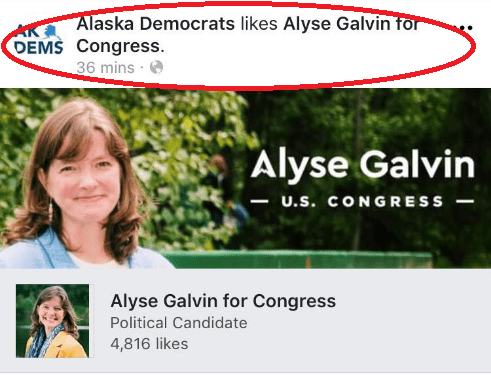 Speaking of Alyse, here she is in a recently posted Facebook Live. She stopped on the side of the Seward Highway on her way back from Hope to see, and I quote, “more whales than we can count.” We watched the video. Twice. There are zero whales. ???

LIVE at Beluga Point with the belugas! A true Alaskan day on the trail!

Posted by Alyse Galvin for Congress on Saturday, September 8, 2018

Can someone give Fish and Game a call (Liz, we’re looking at you) and give them a heads up that if Alyse submits a Belugas count to please, disregard it. 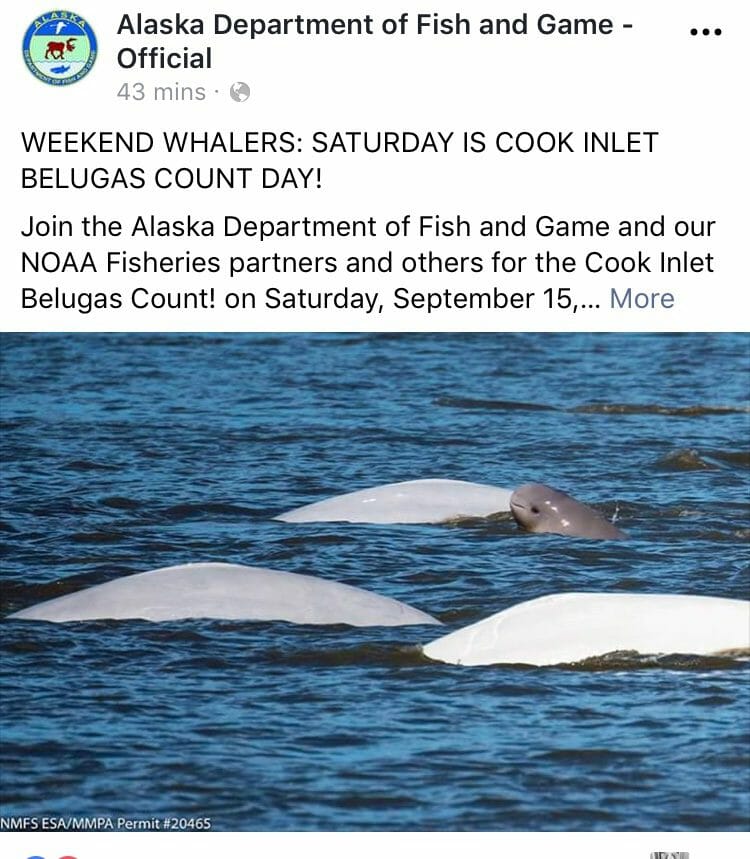 And, earlier this week, Alyse updated her Facebook profile picture. It wasn’t her favorite yellow blazer that caught our eye as much as that qiviut scarf. Daaang Alyse, we’ve seen the prices in Oomingmak. I wonder who in the Galvin family is making it rain? 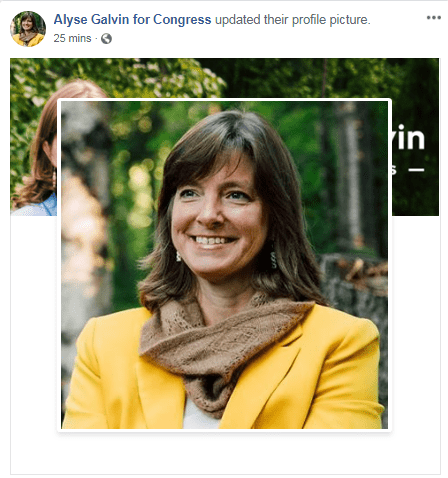 Juxtapose that with Congressman Don Young’s trademark Alaska flag bolo tie. We’d be willing to guess he got it at a yard sale 30 years ago for a buck fifty. Also, are those cigars peeking out of his breast pocket? #LEGEND 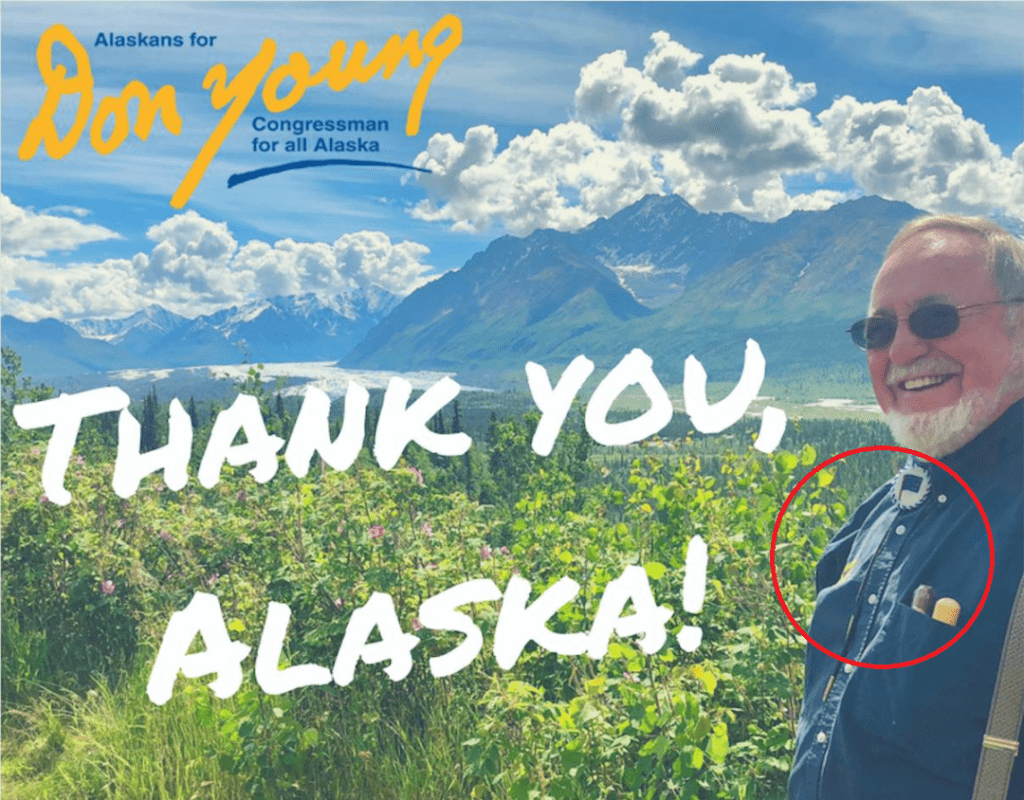 UPDATE: Well, our guess was wrong. But we weren’t THAT far off. LOL. Thanks for the tip Art!

You may think we’re picking on Alyse this week. But, with the Anchorage Chamber of Commerce Congressional Debate coming up next Monday, we’re just leveling the playing field for the inevitable “Don Young moment” that we’ve all come to expect.

Spotted on the Anchorage hillside. We have…questions… 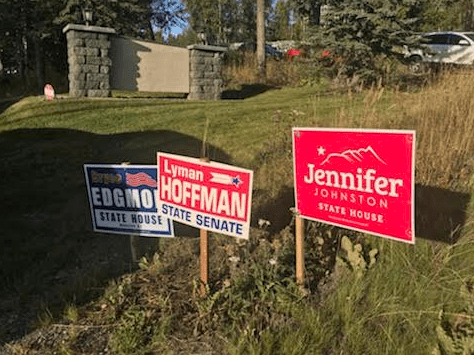 I guess the ACLU is staying out of this one. 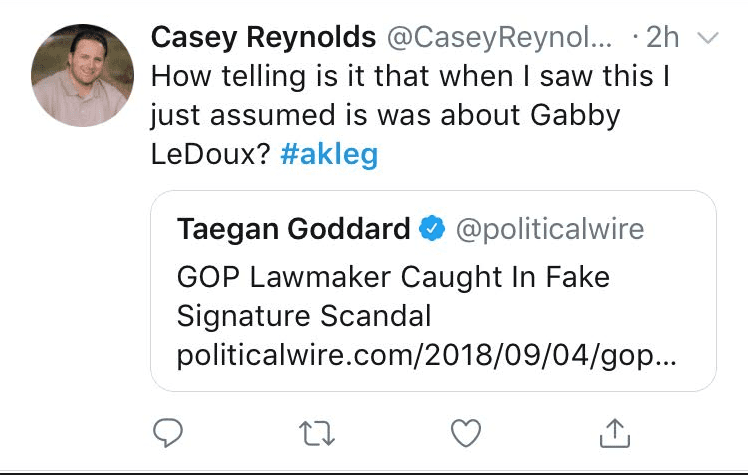 Friendly reminder: a new season of Teen Mom OG, starring Bristol Palin, starts on Monday, Oct 1. And yes, Governor Palin was spotted in the trailer. Note to husband: we need to uncut the cord ASAP. 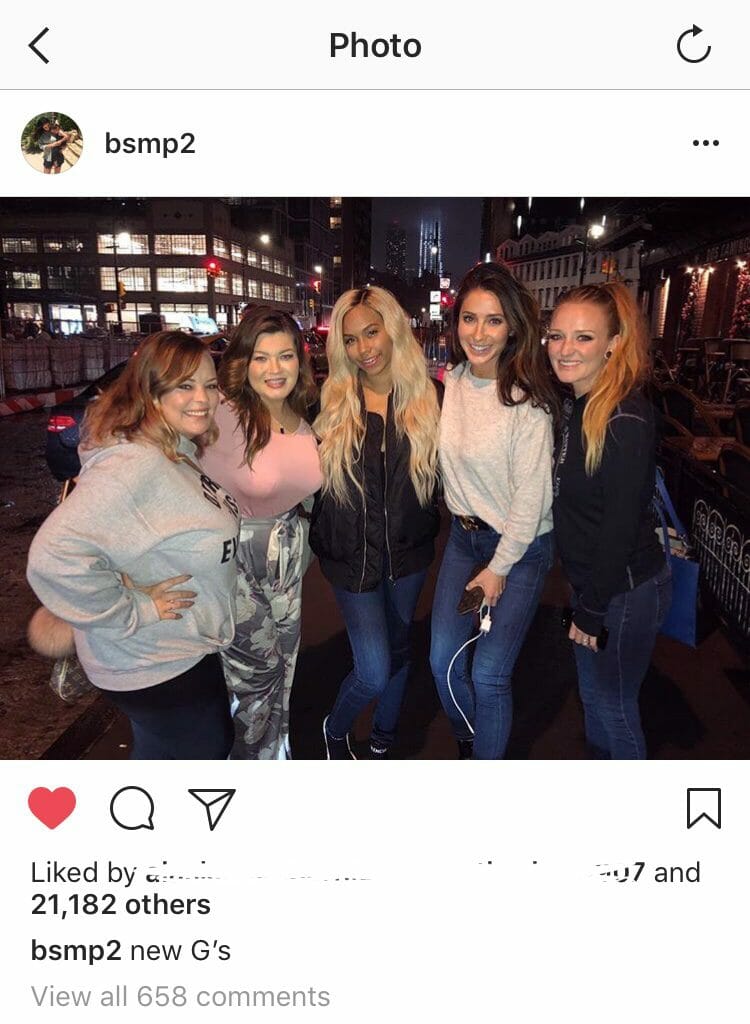 West Anchorage Public Service Announcement: We don’t know who these people are, but we used to live down the road from them. They’ve lost at least one of their tortoises, Boris or Natasha, every summer for the past 3+ years. So, if you live in Sand Lake, we’re not going to tell you who to vote for. But, if you find a lost tortoise, please do these creatures a solid and DO NOT return it to these people. #saveBoris #saveNatasha 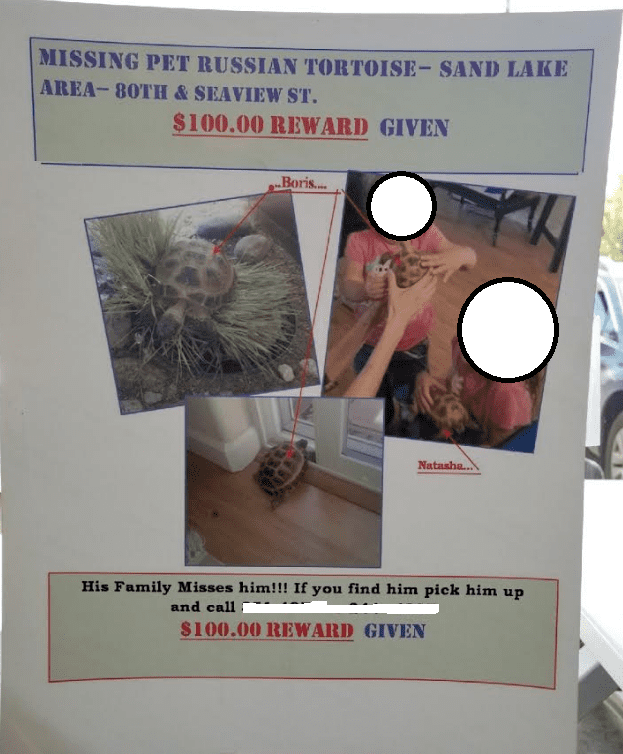 Here’s our social media post on Boris the tortoise from 2015. We can’t make this stuff up folks. 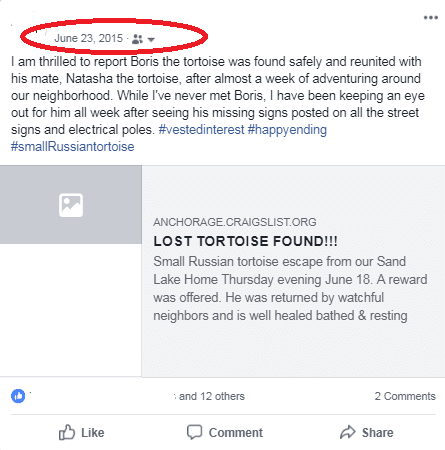 Overheard in Anchorage:
“I really want to listen to Eddie Burke’s new show but I’m too embarrassed to have my name show up on the Facebook Live list of who’s watching.”

“I’m pretty good friends with Laddie and I didn’t know he was even running until I saw his name in the news saying he won!”

Scene: A group of politicos discussing the merits of an Alaska Legislature calendar.

Overheard at the Anchorage Chamber Gubernatorial Debate: Tina Pidgeon chatting with Jeff Landfield. Mark Begich came up to them and said, jokingly, “You don’t want to be seen in public with Landfield!” Tina agreed and added, “Yeah, I might end up in your blog.” Ya think? Hi Tina! Thanks for reading.

Speaking of the Anchorage Chamber Gubernatorial Debate, here are my actual notes from the event. As you can see, it was pretty uneventful. 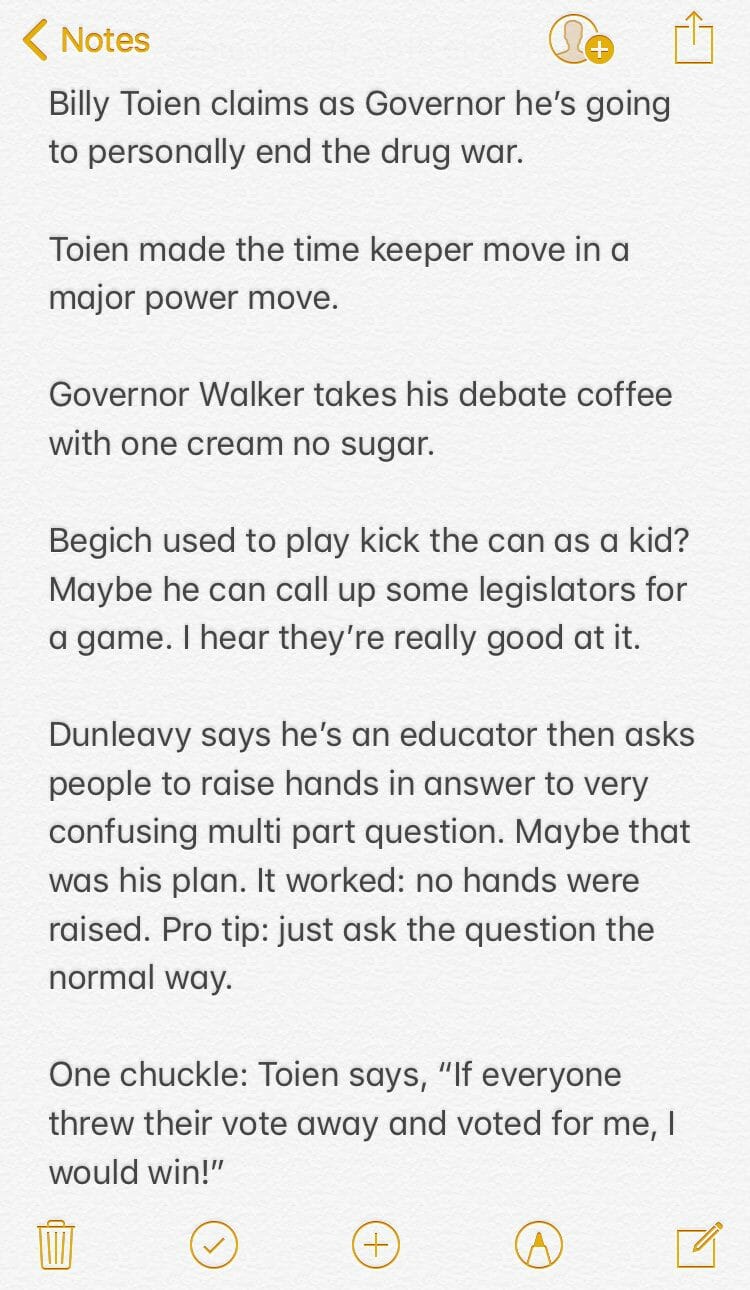 Spotted in Anchorage on Minnesota: An SUV with a Grier Hopkins bumper sticker.

The Alaska Stalker was born and raised in Alaska, and lives in South Anchorage with her husband, daughter, and baby on the way. She is not Jeff Landfield.