I’m baaaaack! While I planned on taking several more weeks of maternity leave, 2020 decided to throw Alaska a major curve ball, and things got pretty dark. The Stalker heard the call for some lightheartedness, levity, and cute dogs, and here I am. This week’s column will feature some things you may have missed since I’ve been away, as well as new material. I hope to be back on a regular basis, and that ya’ll will continue to have as much fun reading the column as I do putting it together. A special shout out to my surprisingly robust number of fans in Fairbanks – I never knew!

Okay, let’s get it out of the way. You know what I’m talking about. At least you do unless you’re one of these lucky guys. 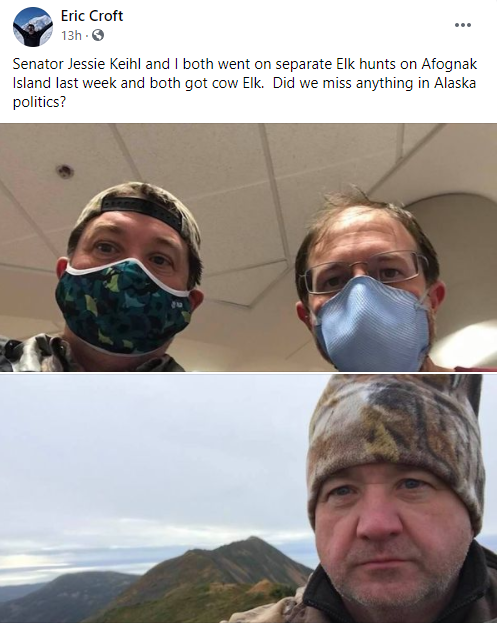 Not sure candidate for State Senate, Carl Johnson, has the best intuition. And from his official State Senate account, too. 🤦‍♀️ 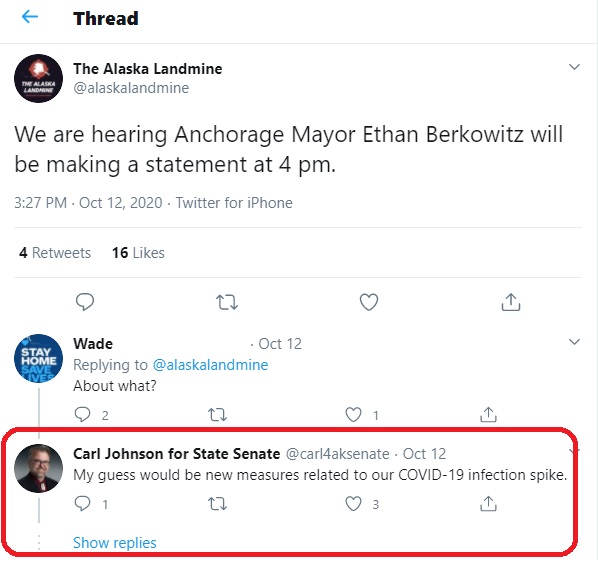 Dear Sen. Kawasaki, are these still available? Asking for pretty much all of Alaska. Very interested! 😵🍷 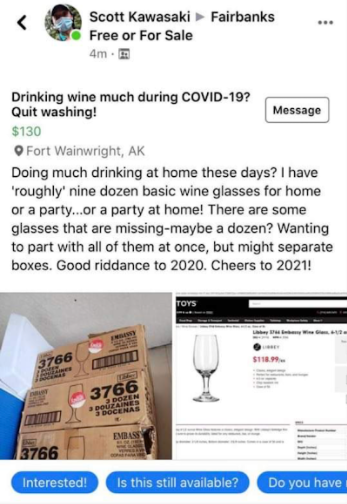 There’s always a silver lining. New acting Anchorage mayor, Austin Quinn-Davidson, has a really cute pup. With any luck we’ll be seeing a lot more of Anchorage’s soon-to-be first dog, Cleo, as she settles into her new gig. 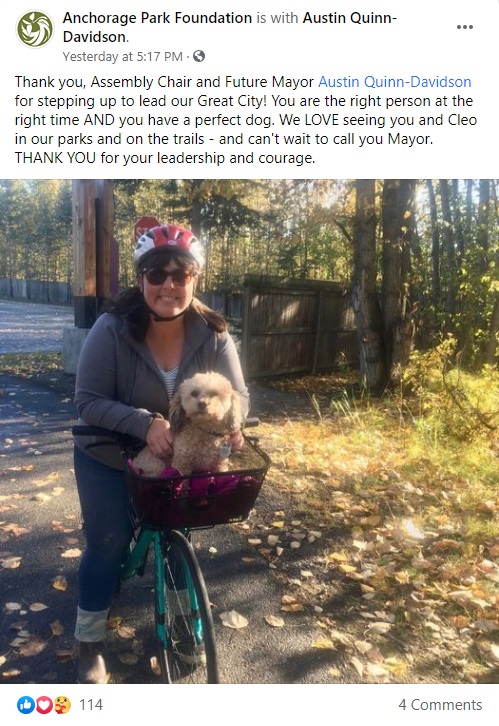 While lots of folks are celebrating Anchorage having its first female and openly gay mayor, Anchoragites can’t go too hard as we’re still not allowed to enjoy live music, mix with other bar goers, or even dance. Fortunately for all of us, former mayor Rick Mystrom isn’t letting the no dancing mandate get in the way of living his best life. Check out those mayoral moves! 🍑

But nothing beats Congressional candidate Alyse Galvin getting down in Fairbanks earlier this fall with a singing Cockatoo on her shoulder. I just love her. 💛💛💛

Down on the Kenai, candidate for House District 30, Ron Gillham, is dressed as if Congressman Don Young and Alyse Galvin had a baby. 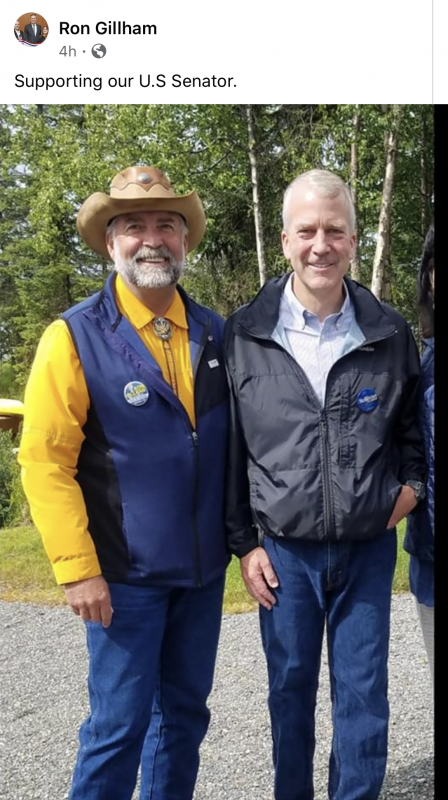 One of the biggest scandals this election season revolves around Dr. Al Gross and his claim he killed a grizzly bear in self defense. Al has made a huge deal about the bear throughout his campaign. His “Bear Dr.” campaign jingle is so prevalent and pervasive it has become the Alaska equivalent of Baby Shark. Sen. Dan Sullivan even released an attack ad questioning Gross’ claims. If you thought #beargate was over, you’d be wrong. Check out this Tweet from July. There are now multiple bears?!! Does that mean there was also multiple bloodcurdling screams? I think we’re going to need some answers from the Bear Doctor ASAP. 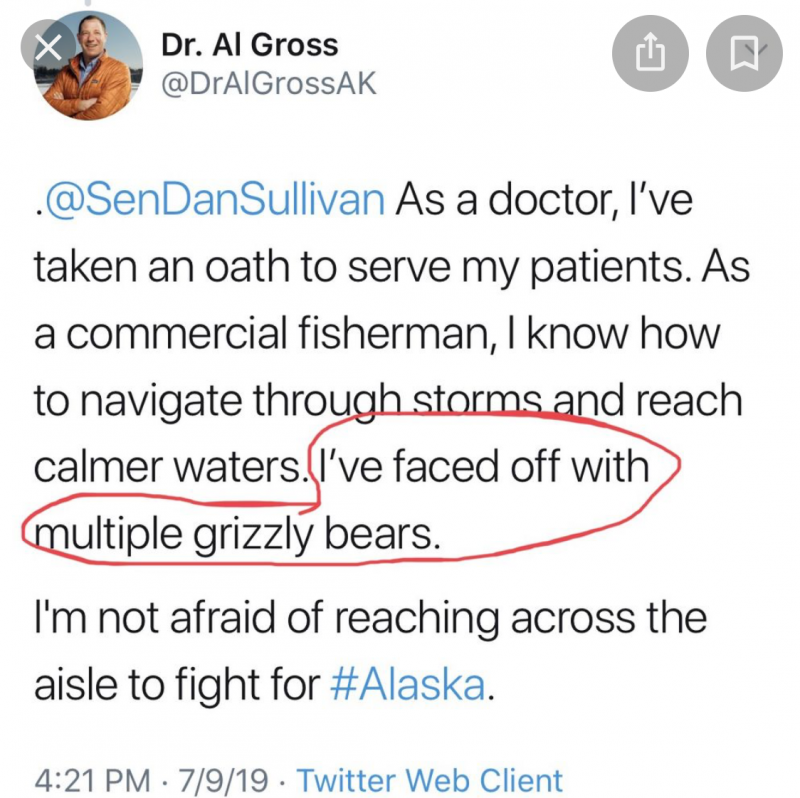 Or is it the Bare Dr.??? Hey Al, XYZ! 😱🙈🙈🙈 I honestly cannot believe there is an official campaign commercial featuring a candidate for U.S. Senate with his fly down. Someone please tell me this is still running on television.

Honestly, the only bear scandal that should matter is famous musher and politico, Jeff King, boasting on Facebook about setting a real bear trap below his Biden Harris signs to catch would-be vandals. Yikes. Note to everyone: Do not do this. Even as a joke. 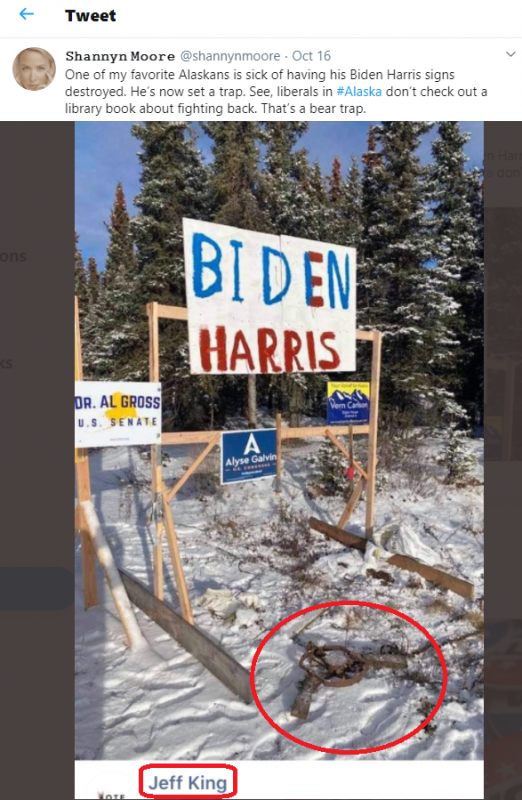 Speaking of vandals… Now I’m not in any way saying this was an inside job. But, look what they wrote: Antifa was here??? God is gay??? 🙄🤣🤣 I’d love to know who did this. Clearly Josh is too pure of heart to even realize what’s going on. The Stalker is 100% anti-vandalizing signs, but I’m 200% sure this wasn’t actually Antifa. 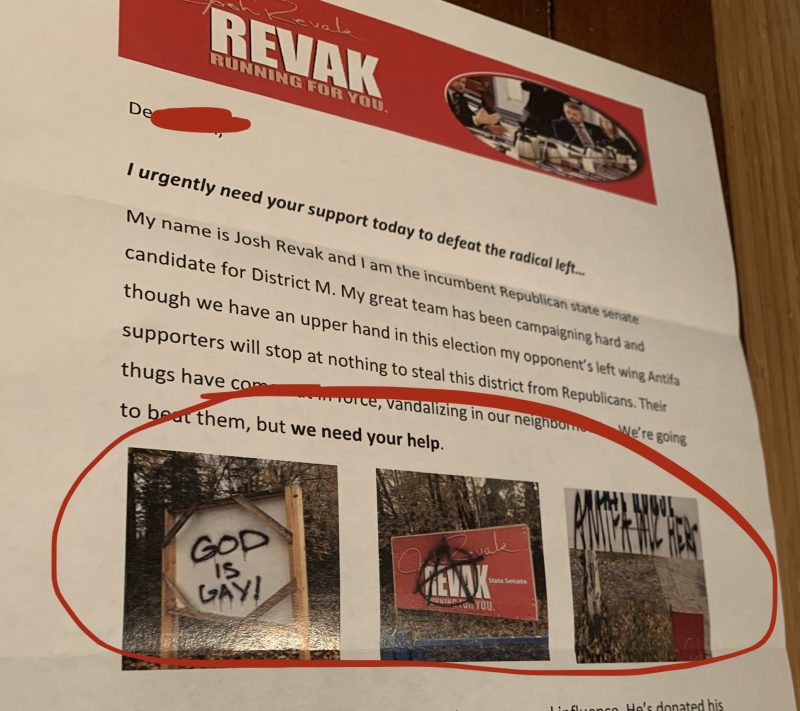 My favorite ad this election cycle has to be House District 27 candidate Liz Snyder’s ring cam video. Liz was one of the first to make a video that incorporated some of the challenges of campaigning during a pandemic. While we’ve seen some other ads that play off masks, social distancing, etc. this one remains the best. Liz even did a “Part 2” video where she addresses some of her competitor’s door lit.

Knocking on neighbors’ doors isn’t the responsible thing to do right now, but we’ve got a plan!(Paid for by Snyder for AK House, 2351 Foxhall Drive, Anchorage, AK 99504)

About that second video… This tweet rebuttal from her competitor, Rep. Lance Pruitt, had me rolling on the floor laughing. Whoever is running the @lancepruitt907 Twitter count is very loose, but this Tweet is straight 🔥🔥🔥

I don't know how this person got ahold of my lit but they are not an authorized representative of my campaign. I would recommend you don't open the door for them. pic.twitter.com/XVDcz7h9ZV 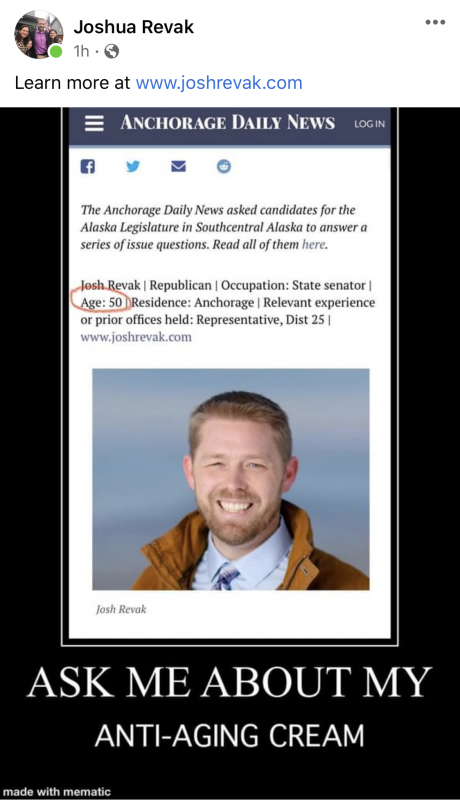 Have you seen House District 15 candidate David Nelson’s Facebook videos? He’s always walking, alone, usually in a forest, and often sporting a suit. He doesn’t even have a selfie stick, so they’re always really close up. Like, what’s he doing in a suit in the woods? My advice to the folks in District 15: Stay out of the forest, and SSDGM.

Preserve and protect the PFD.

Let’s stop the Legislature from playing politics with our Permanent Fund Dividends!

In past election cycles there was an unwritten rule between candidates to refrain from trolling each other on social media. This year we’re seeing candidates tagging each other, getting into it in the comments, and even stalking their opponents pages. Candidate for House District 22, Stephen Trimble, has a penchant for scrolling his opponent, Sara Rassmussen’s, official House page and “liking” any negative comments. 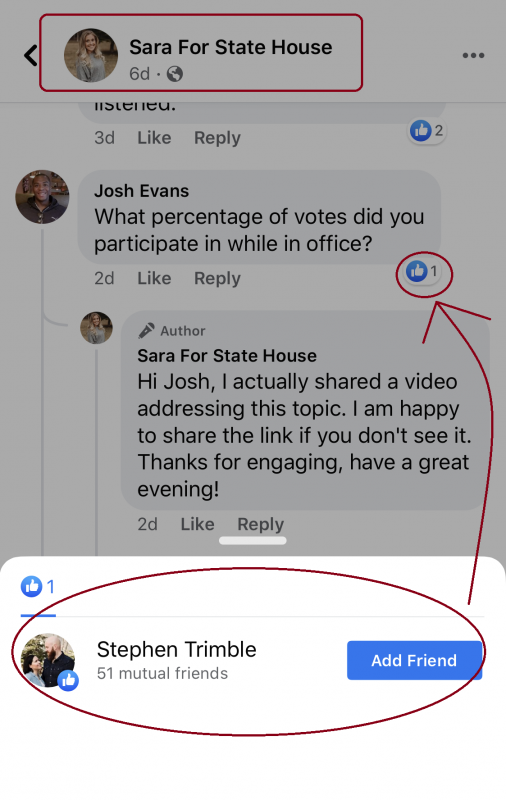 Hopefully, with the addition of Finn, Stephen will spend less time trolling and more time going door-to-door. Judging by his cute little face, Finn is a winning message! 🐾 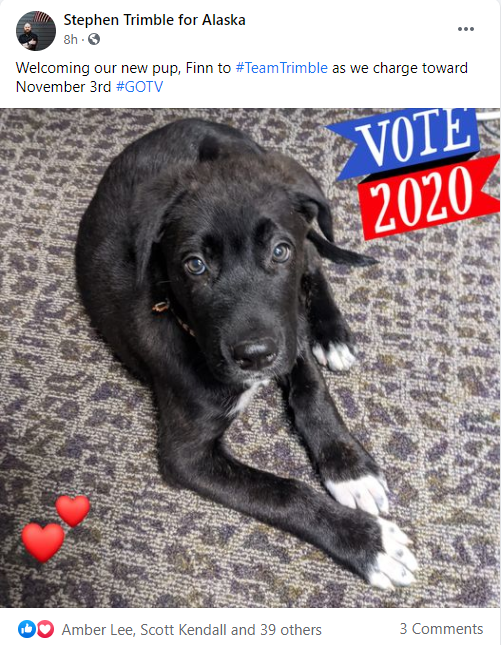 Sweet Finn reminds me of Gov. Mike Dunleavy’s post on National Dog Day. I have questions… Is that Mike’s dog? Does Mike even have a dog? I mean, if it was the Governor’s dog you would think his communications team would have it together enough to post the little guy’s (or gal’s) name. Day 56 of Governor Dunleavy hiding from doggone questions. Throw us a bone, Governor. 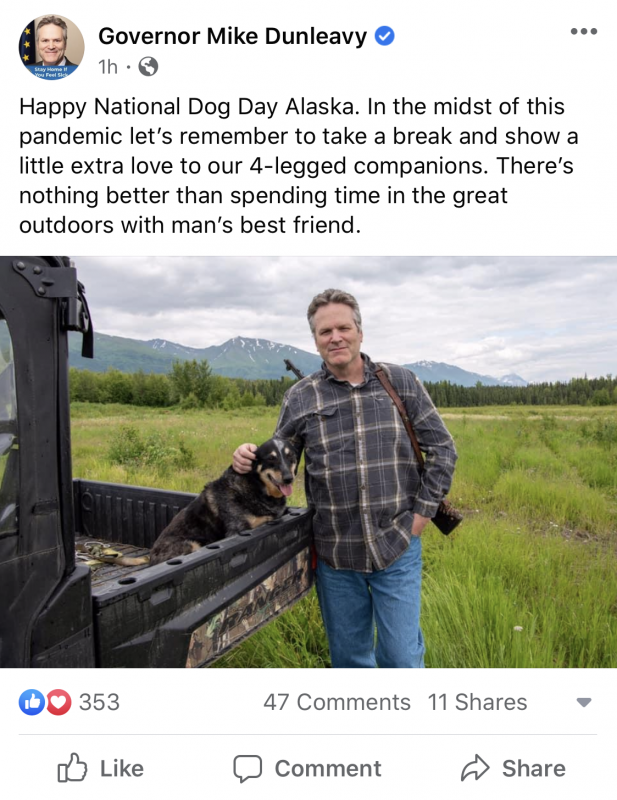 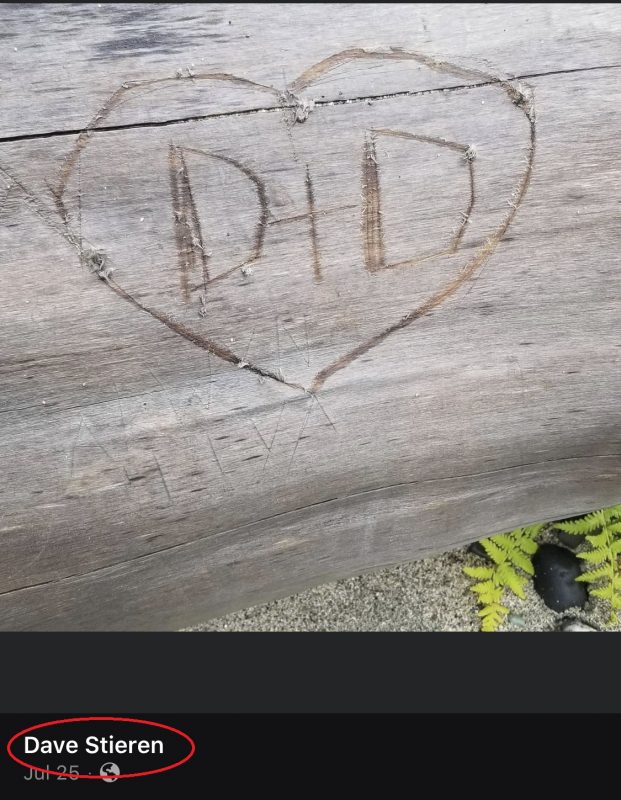 A repeat Stalker tipster sent in this photo of Sen. Lora Reinbold commenting, “I had to send this to you because it looks like Lora is photobombing her son’s Tinder profile pic. 🌶️” LOL! 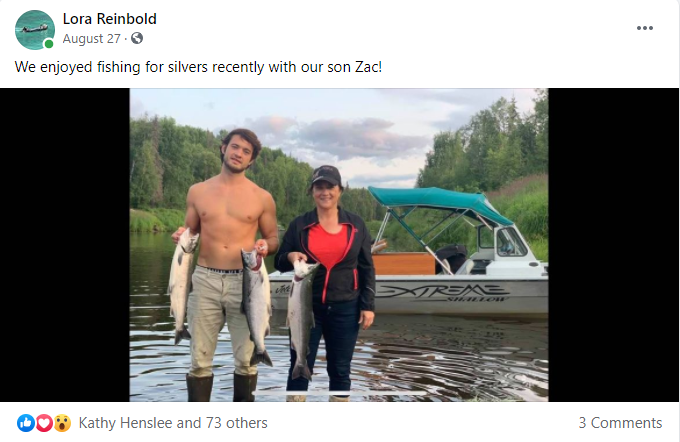 Speaking of Tinder, our favorite political “met on Tinder” couple had some exciting news to share earlier this week. Congratulations Grier and Kristina! Hit me up if you want some good hand-me-downs. Or if you’re looking to enter into the Rock and Play black market. 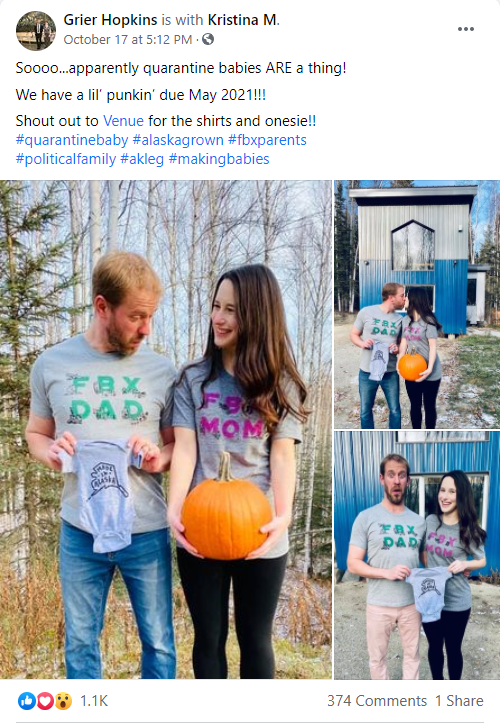 Can someone tell Commissioner Kelly Tshibaka she might want to learn how to spell forget-me-not before 2022. 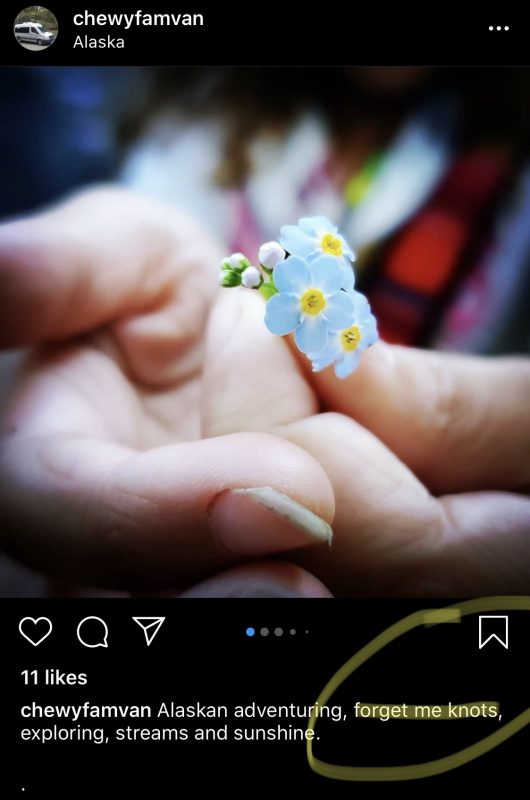 It’s okay, Kelly. You’re in good company. Not knowing how to spell Alaska’s state flower is about on par with not knowing about Turnagain Arm. Glad Rep. Sara Hannan was there to set the record straight.

Now on to the races! An avid Stalker reader wants to know if there is a subliminal message in candidate for Senate, Marna Sanford’s, campaign logo. Marna chose to go with an aggressive bull moose… 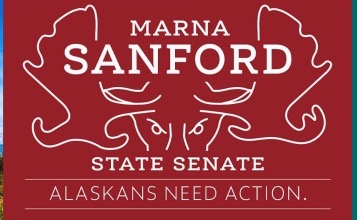 …at closer look, perhaps he has a feminine side? We report, you decide. 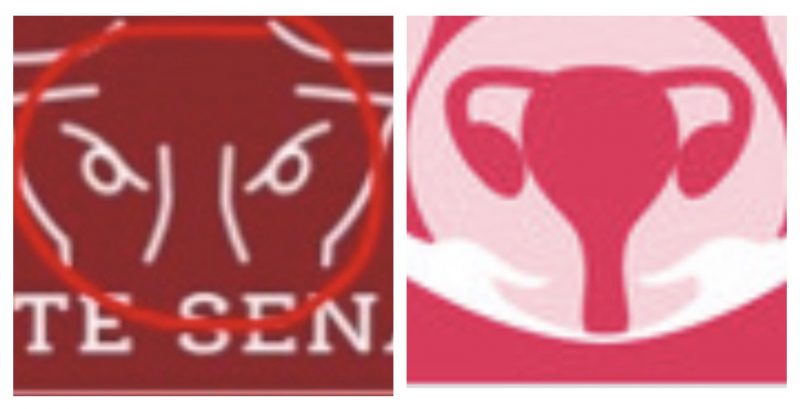 Candidate for House District 28, James Kaufman, has a slight obsession with meat. He’s a self proclaimed Ribeye Republican who strongly supports “additional cuts.” Ahhh. I see what he did there. James, your puns meat expectations. Well done. However, with just days to go before the election, the steaks have been raised. While winning your house race won’t be a piece of steak, I look forward to you and Suzanne settling your beef once and for all. 🥩🍖 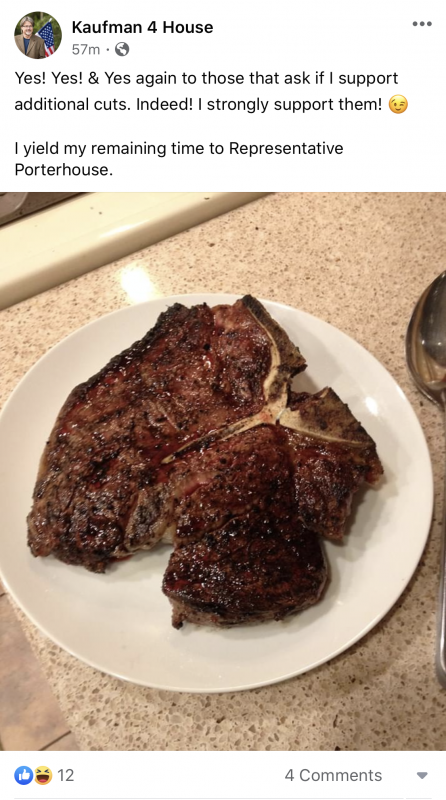 This exchange between candidate for State House District 6, Elijah Verhagen, and… himself had us do a double take. 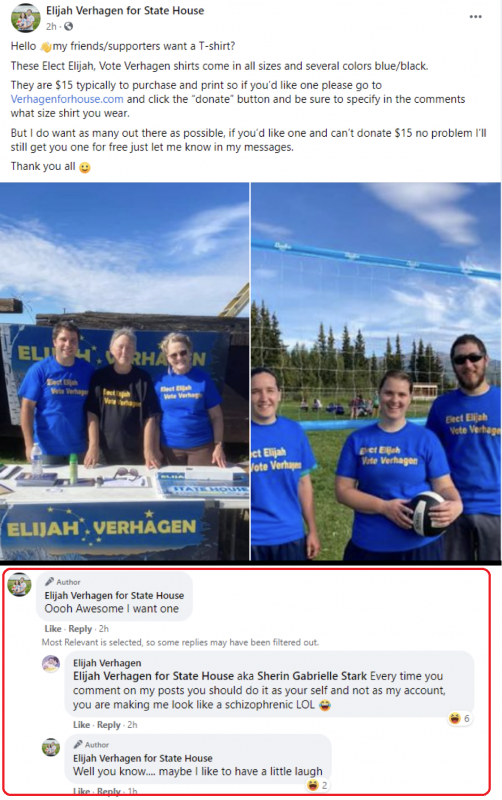 Overheard in Anchorage: “Have you heard Forrest Dunbar has a new campaign slogan for Anchorage Mayor? Done Forrest Done!”

Overheard in Fairbanks: “We’re all just waiting to see if Mike Cronk’s going to reprise his infamous Madea costume this Halloween.”

Dr. Al Gross, during ATIA:  “Let’s pursue renewables and get away from oil!”

The Alaska Stalker was born and raised in Alaska. She lives amongst the bears in South Anchorage with her husband, daughter, son, and newborn. She is not Jeff Landfield.

The stalker is a murderino!

So happy Stalker’s back! Whoop!