Monday was Veterans Day and politicos on the national, state, and municipal level all posted touching tributes and sincere thanks to those who serve and have served. It was a great day to be online. In case you missed it, here’s a feel good moment via occasional #akleg tweeter, Stephanie Quinn-Davidson. Be sure to turn your sound on for this one.

Alaska Airlines agent, Denise, in Anchorage gives a beautiful tribute to the veterans headed to Fairbanks. Her voice stopped everyone in the terminal their tracks. @AlaskaAir #IFlyAlaska #alaska #veteransday #thankyouvets pic.twitter.com/w61552n0EL

While things are slowing down in local politics for the holidays, in D.C., the impeachment hearings are in full swing. Take it easy, Jeanne! ?????? 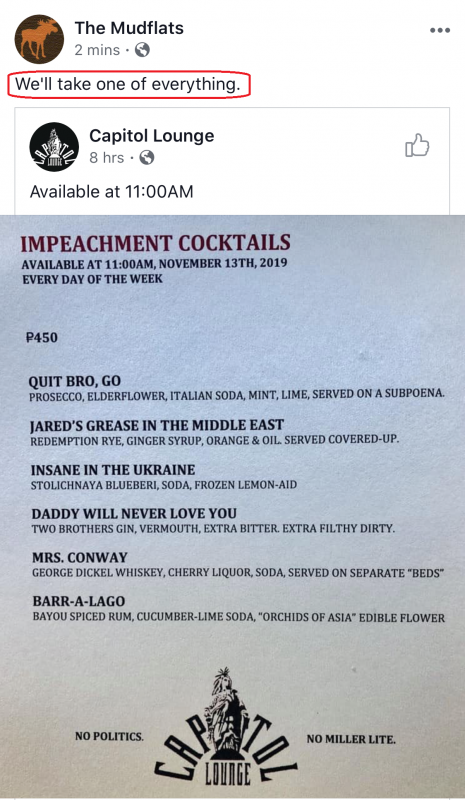 Even when things are moving a million miles an hour, Sen. Lisa Murkowski knows how to connect with home. That Sen. Ted Stevens Hulk cameo. ?? I am verklempt. 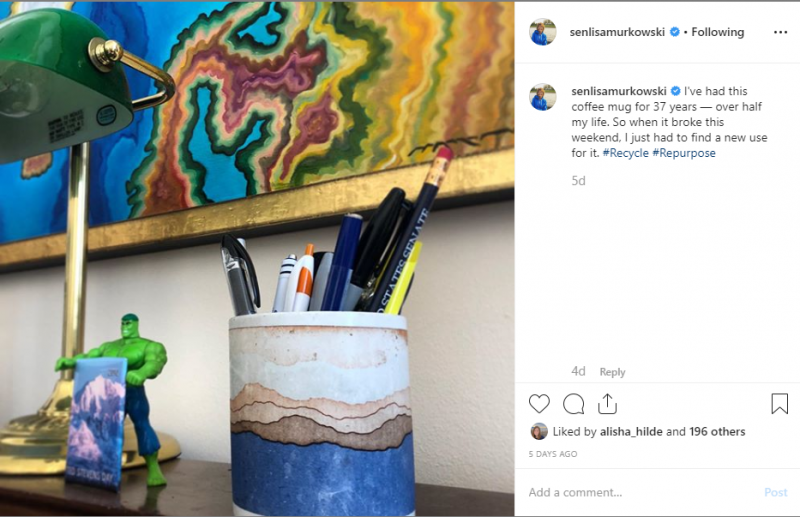 If you ever want to see Sen. Dan Sullivan look genuinely surprised, check out this great video of his staff surprising him for his 55th birthday celebration. Lookin’ good for 55, Senator! ?‍♂️

Ok, they got me! Thank you to my wonderful, hard-working team for giving me a good surprise for 55. ? pic.twitter.com/dKjT4vpU6x

Speaking of the Alaska delegation: Lisa looks perfect (natch), Dan doesn’t know where to look (natch), and Don looks like he’s having a medical emergency. Everyone is playing their parts perfectly. 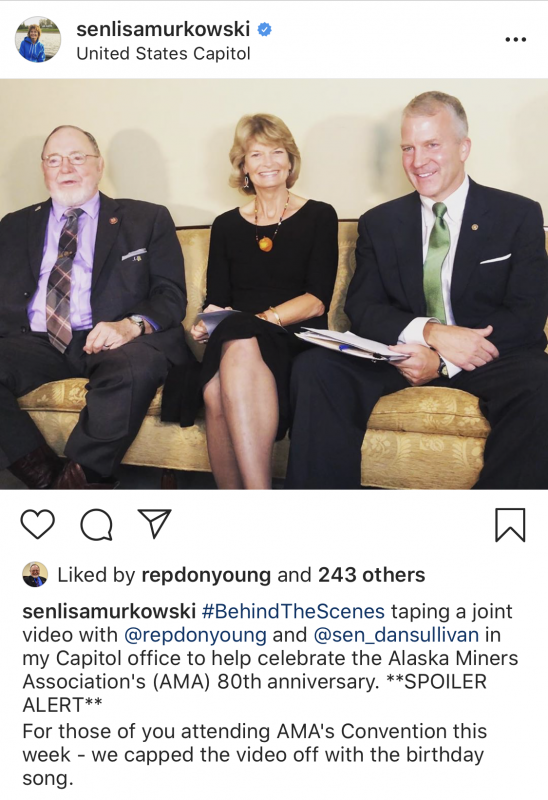 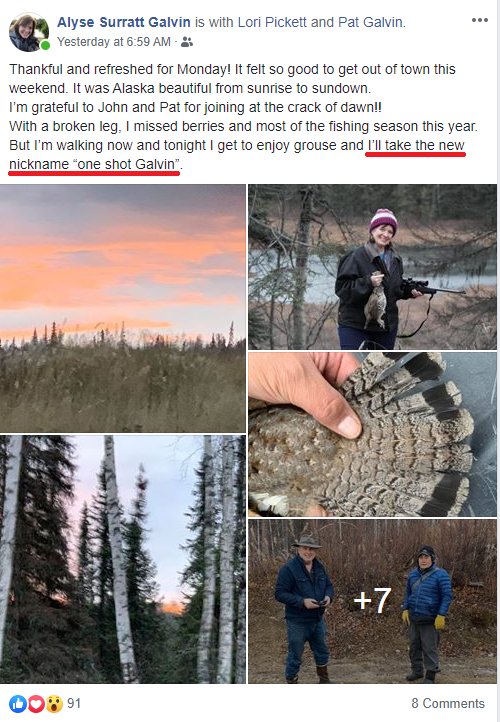 All kidding aside, I was glad to see Alyse take a night off from campaigning to have a special date with her most important constituent. She wore a red blazer to represent their love. ? 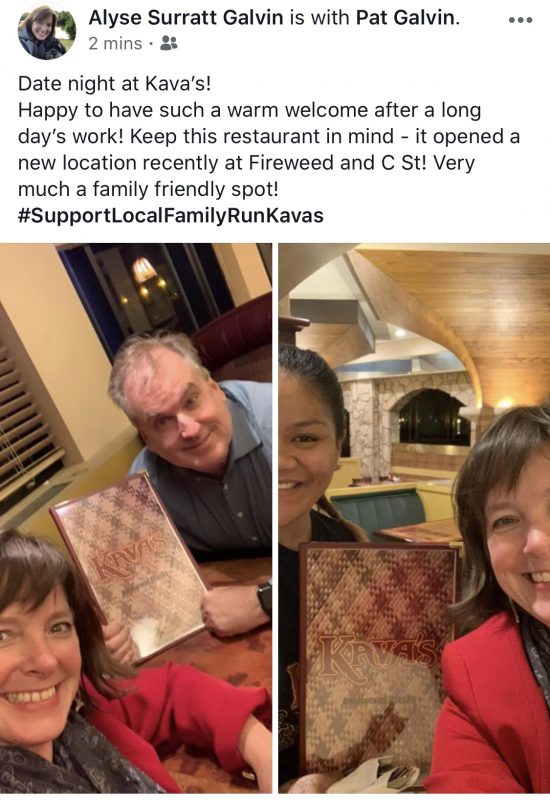 Candidate for Senate, Dr. Al Gross, launched a campaign ad with the endorsement of registered Republican Andy Holleman. While the only person surprised that Andy is voting for Dr. Gross is Andy, the thing that caught my eye was at the very end. What is that brown thing supposed to be? A voting box? A stamp? #designfail 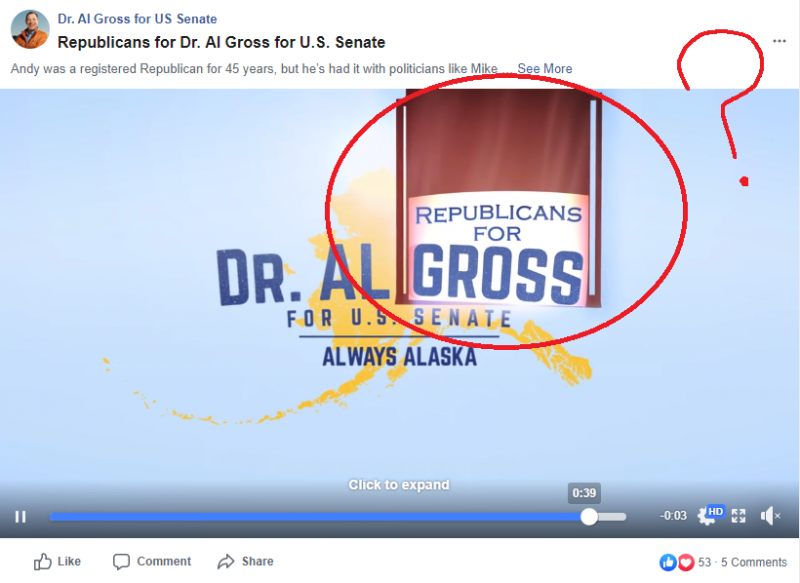 One year later… Ya think? 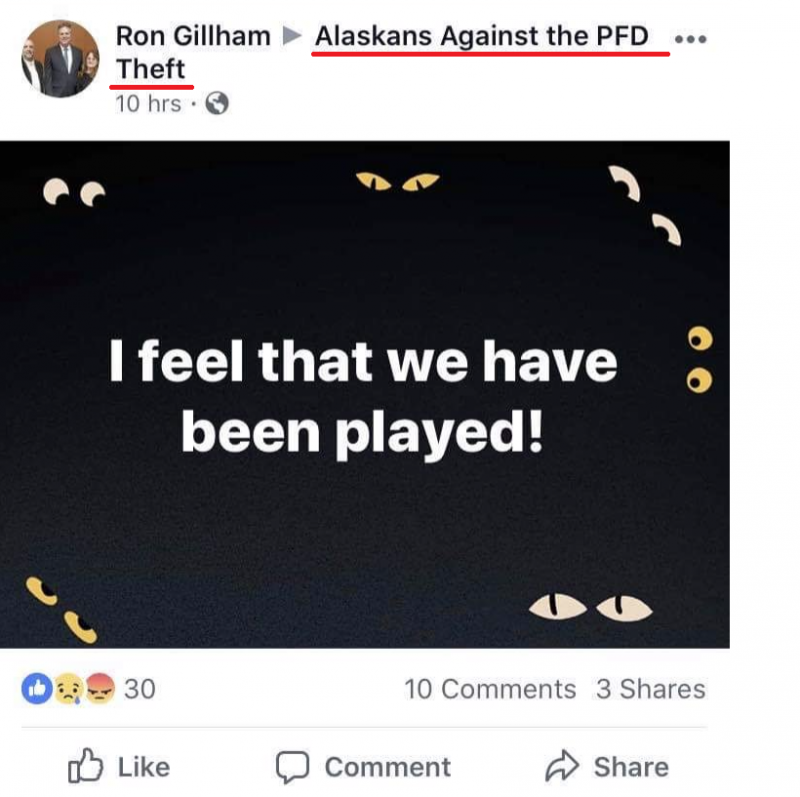 Alaska Attorney General Kevin Clarkson has had a rough couple weeks. He keeps getting unfavorable rulings in case after case, and then he ran into some trouble spelling Sergeant on Twitter. However, I’m not sure AFL-CIO President Vince Beltrami is the best person to throw stones about typos. 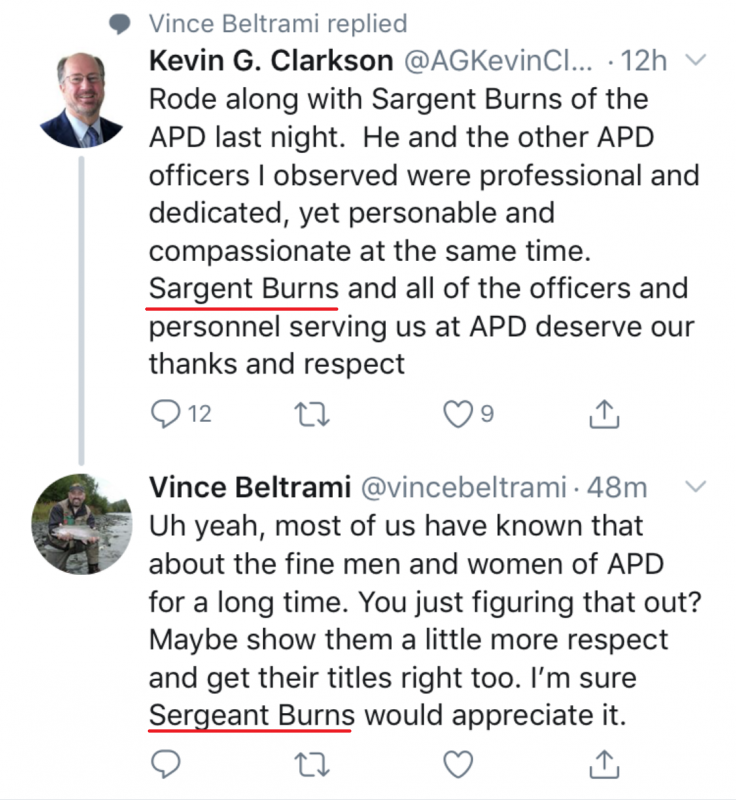 The Alaska Stalker never forgets. Throw back to the most epic typo of all time. ??? 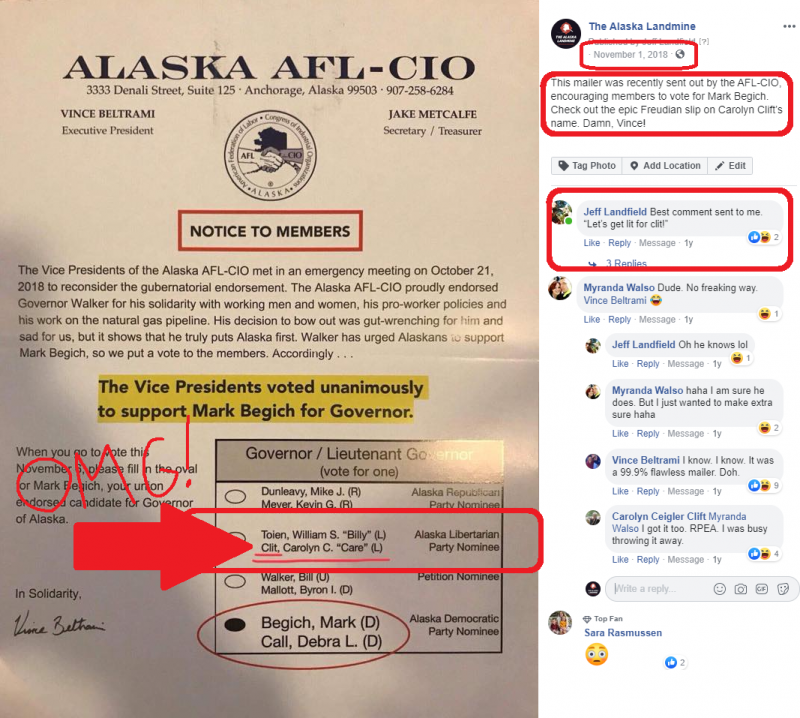 You heard it here first, folks. Sen. Mike Shower’s re-election slogan will be: “Like a diamond in a Goats [sic] rear end.” 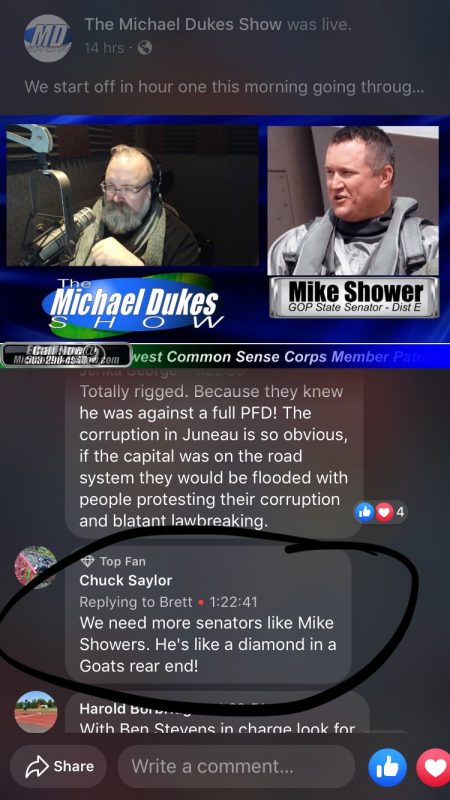 Somesenator had a terrible, no good, very bad day. *Looks out window* On the bright side, it doesn’t look like Josh is going need that snowblower any time soon. 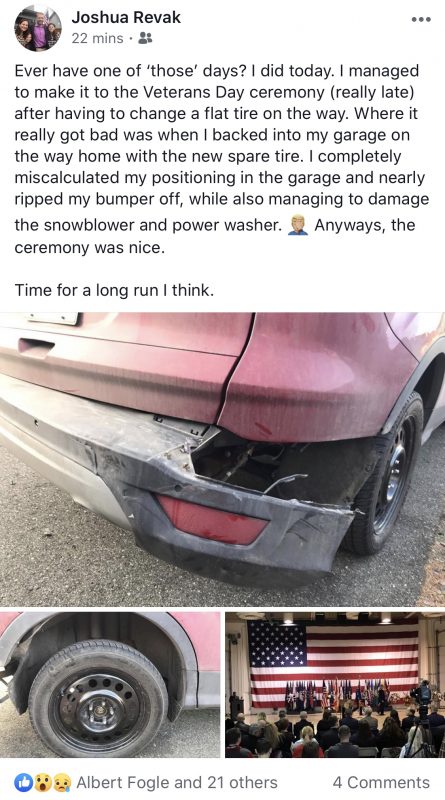 ***
Are Rep. Kelly Merrick and her husband, Joey Merrick, the Alaska version of Kellyanne and George Conway?! 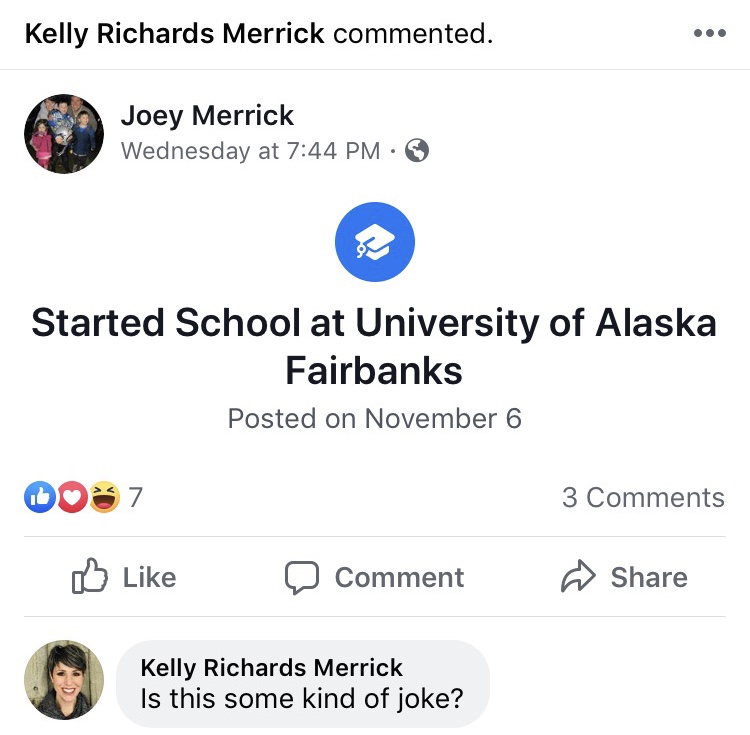 Just be sure not to go down aisle 10, Spenard Rd., after midnight. 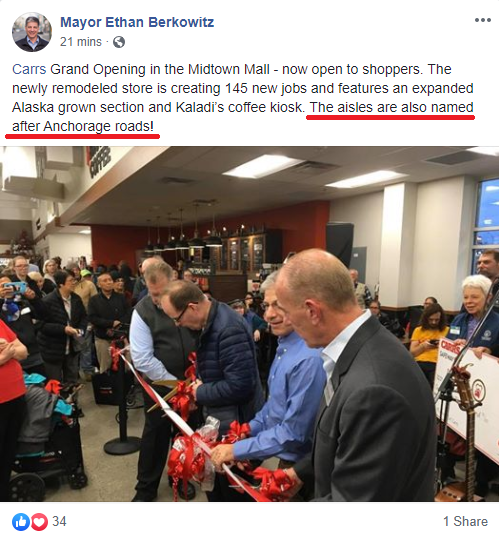 Anchorage Assemblymember Austin Quinn-Davidson’s anonymous yard decorator has finally been exposed. It was none other than fellow Assemblymember Meg Zaletel! 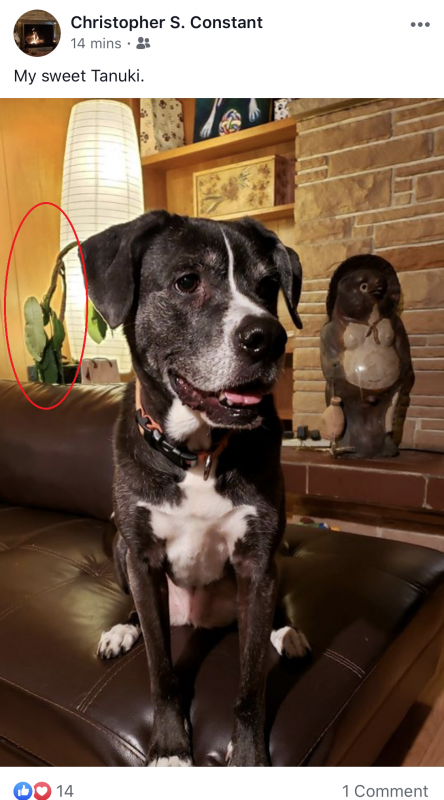 Firebrand candidate for Anchorage Assembly, Jamie Allard, has also been posting cute dog pics. Hers come with some extra baggage; because nothing says team player like publicly trashing your potential coworkers. 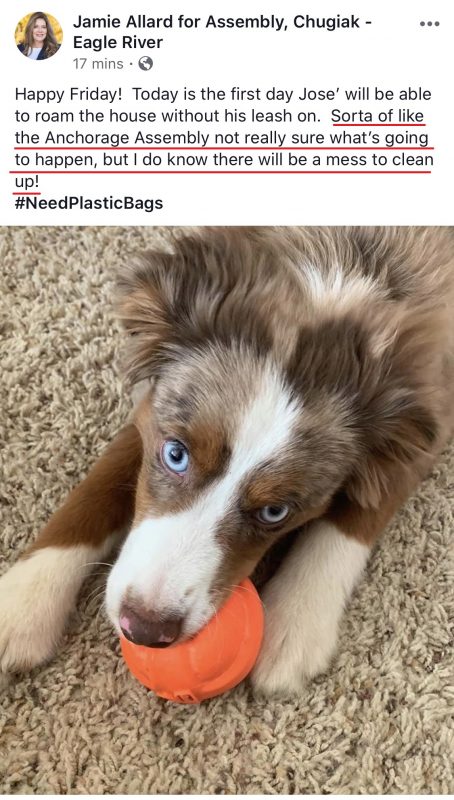 And now for another installment of “Guess the Politico!” This former elected official has one of the best campaign jingles in Alaska History. He also ran for Mayor of Anchorage (twice)! To find out who it is, click here or scroll to the end. 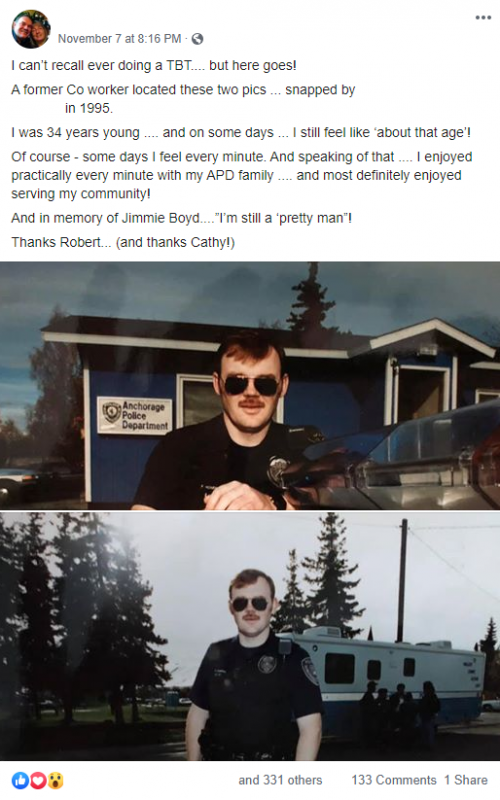 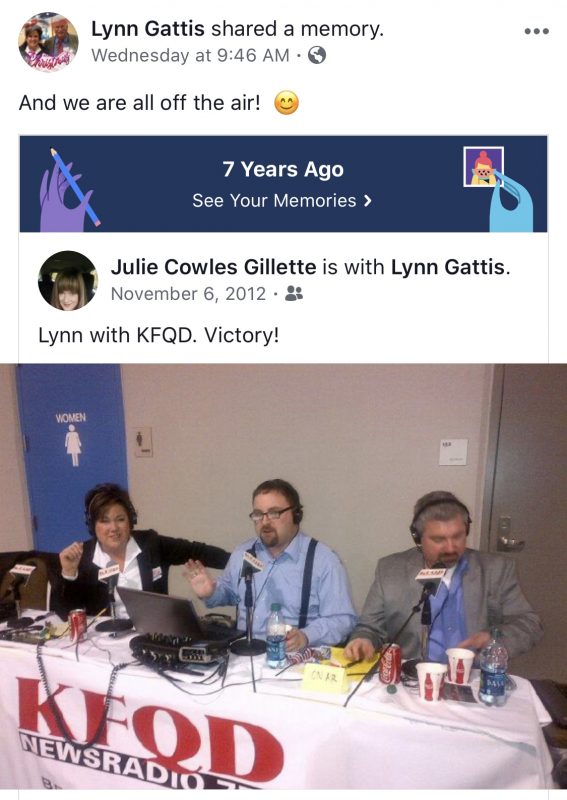 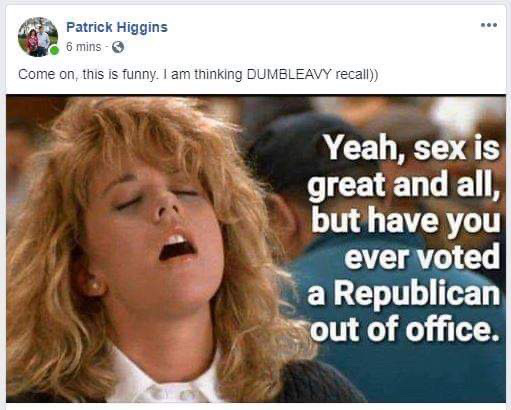 Spotted at the Mid Town Mall: A rare public sighting of Chief of Staff to Bryce Edgmon, Amory Lelake.

Overheard on the radio waves: “Mike Dunleavy, the Governor of Arkansas.” – That national guy that took over Dave Stieren’s slot. I don’t know his name because, like all of you, I don’t listen anymore…

The answer to this week’s “Guess the Politico” is none other than former Anchorage Assemblymember Paul Honeman!