I hope you enjoyed last week’s Valentine’s Day themed column. There were a couple posts, published after our deadline, simply “too sweet” not to share. First, Gov. Mike Dunleavy posted a lovely valentine to his wife, First Lady Rose Dunleavy. With over 1.5K likes and dozens of heartfelt comments, it’s a good reminder to folks living in the recall bubble that a lot of Alaskans like our Governor. Mike made the right call and didn’t post this one to Twitter – the comments would have gotten downright nasty. Maybe he should stop using Twitter altogether. 🤷‍♀️ 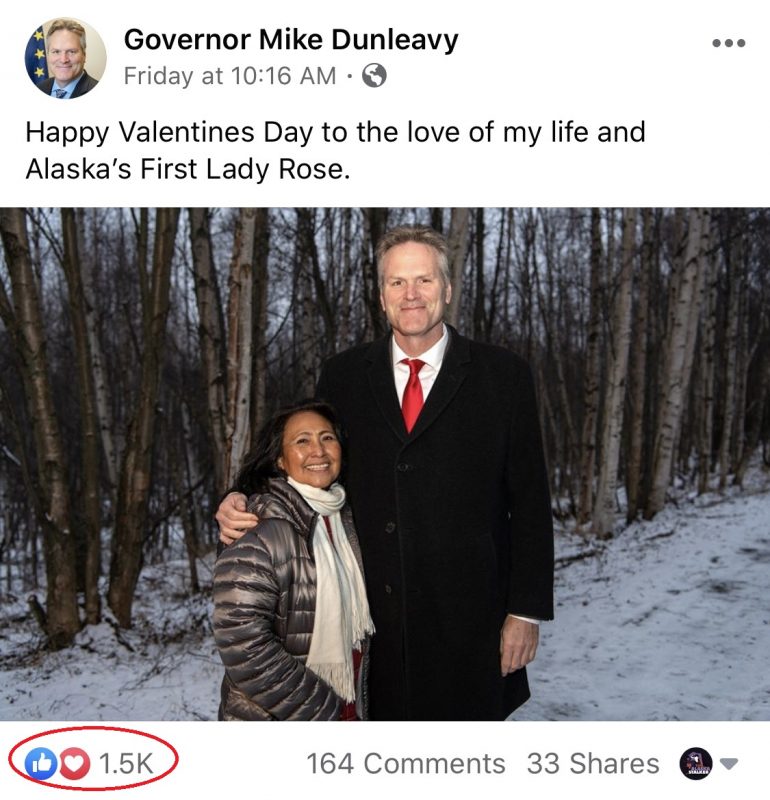 And now for an epic Valentine’s Day throwback of “Guess the Politico!” Hint: she’s back this year for round two. To find out who it is, click here or scroll to the end. 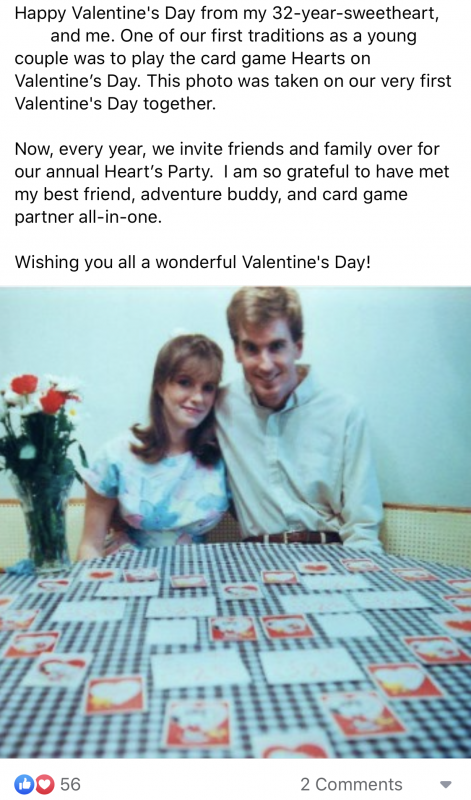 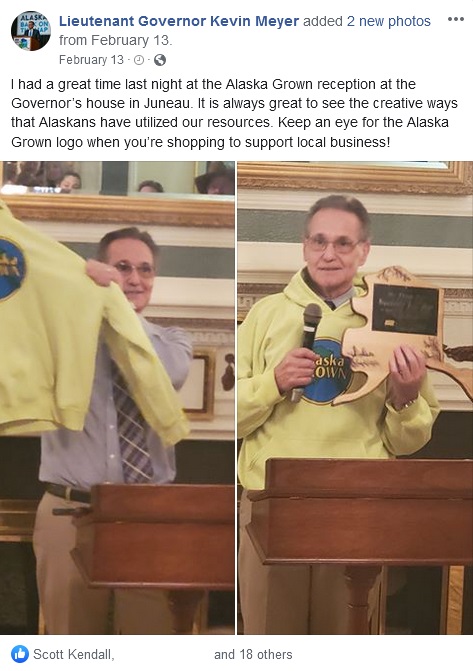 Speaking of Lt. Governors… I believe this is called a mea culpa. Good to see former Gov. Bill Walker and former Lt. Gov. Valerie Davidson back together again. 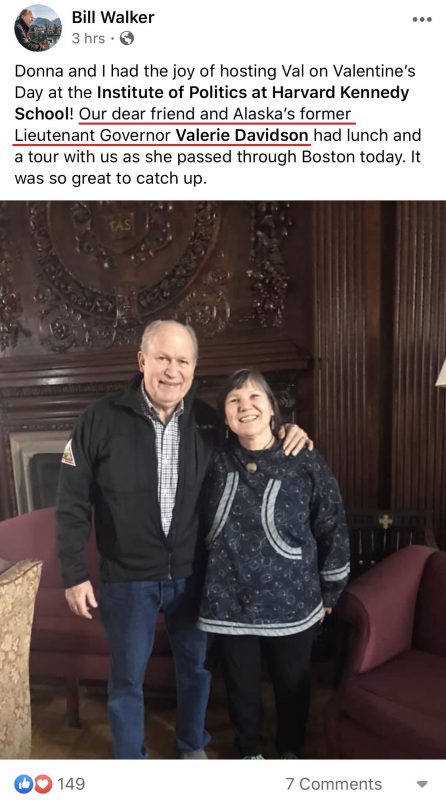 I had way too much fun on the Senate floor today!

I had way too much fun on the Senate floor today!

The best part had to be when a Tweet alert for the Alaska Landmine popped up about halfway through the video. 🤣🤣🤣 Glad we have so many fans in the Capitol! 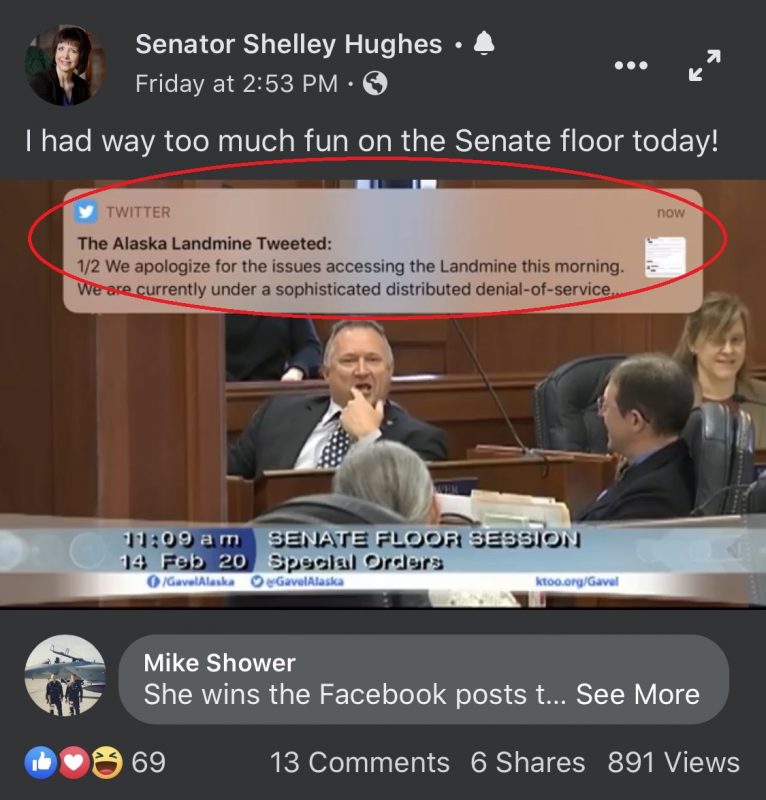 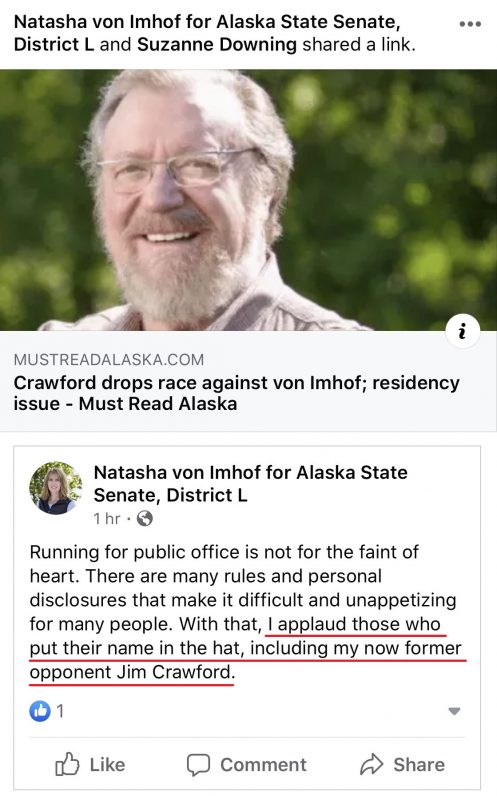 Rep. Mel Gillis’ Facebook posts are unique and vibrant. In fact, you could even call them “great!” Is it sexist if you tell a man he should smile more? 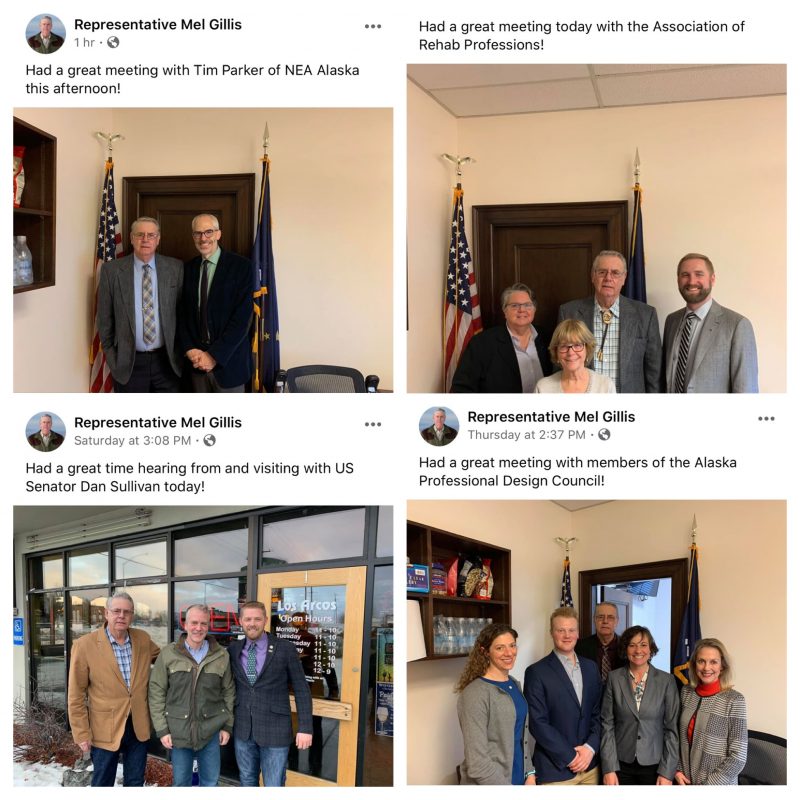 Rep. Sharon Jackson recently uploaded  some snapshots of a typical week in the legislature – lots of events, meetings, and even a birthday. Except Sharon accidentally posted a screen cap of her private text messages. ACK! This is every person’s worst nightmare. Luckily it was a rather benign post checking on flight times. Alaska Stalker pro tip: Always double check before you upload! 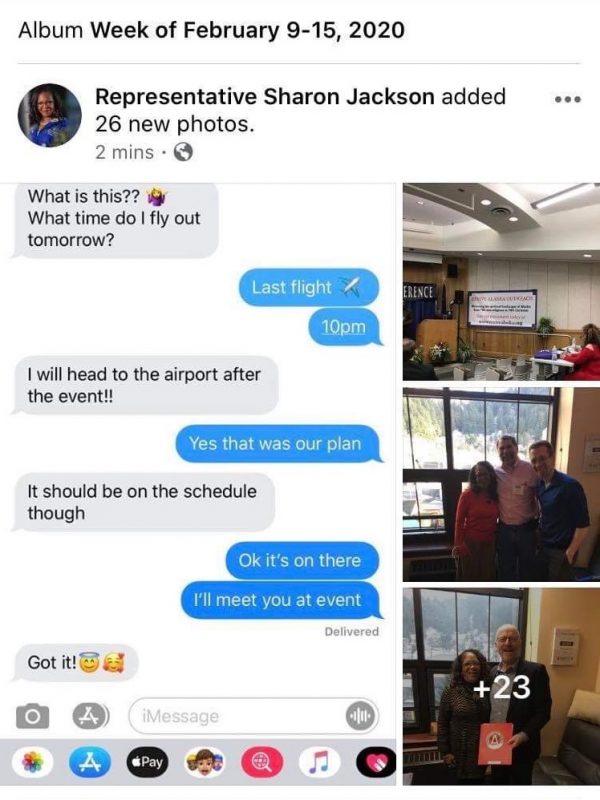 If you happen to see Rep. Sara Rasmussen anytime soon, please be kind. And be sure to send some healing vibes to poor Callie.🐾🐶 As Sara’s grandma would say, “It takes nothing to be a nice person and we never know the type of day another person is having, they may need to hear kindness from a stranger more than we know.” Indeed. 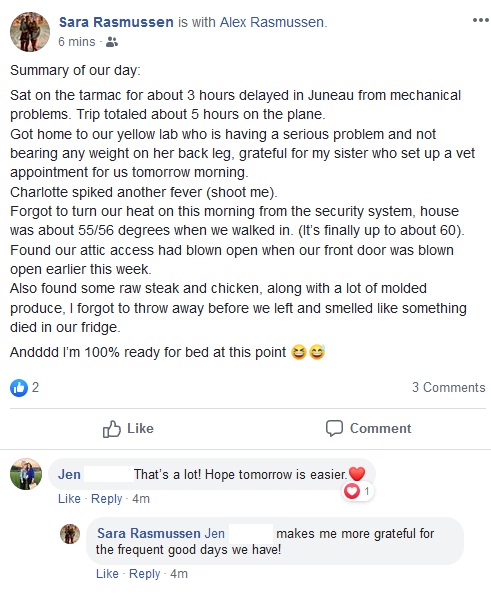 Anchorage Assemblymember (and mayoral candidate) Forrest Dunbar had a doozy of a Tweet this week. However, I feel more compelled to discuss this Twitter thread about King’s Quest vs. Space Quest. While I agree which late 80’s/early 90’s computer adventure game is best would make a compelling debate, it wouldn’t be fair to King’s Quest as Space Quest is far superior in every. single. way. If Assemblymember Dunbar would like to borrow the Space Quest games, I happen to have them all on CD-ROM. 🤓 Although, if Forrest is apprehensive about going to the Bush Company, then he may not fully appreciate the Latex Babes of Estro. 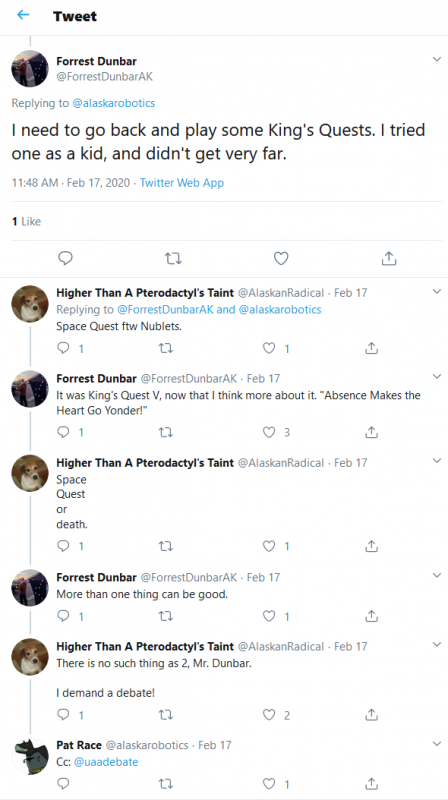 A loyal Stalker reader recently sent us this. I’m not saying I know who wrote it, but I think we can all take a pretty good guess. I kid, I kid. Chris would never. 🙃 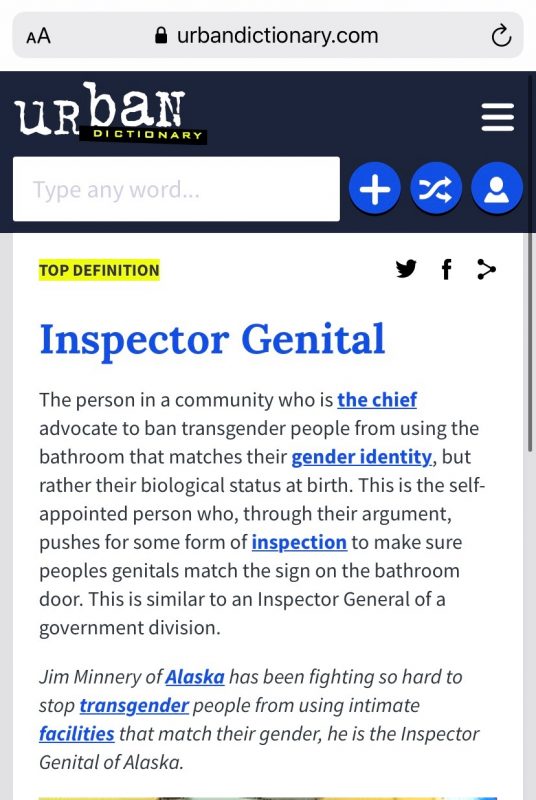 The Anchorage Assembly elections are coming up in a few short weeks, and candidates have been providing the Alaska Stalker with some quality content. Here’s a quick recap. Rick Castillo posted an epic dad joke after his signs were destroyed in the last wind storm. 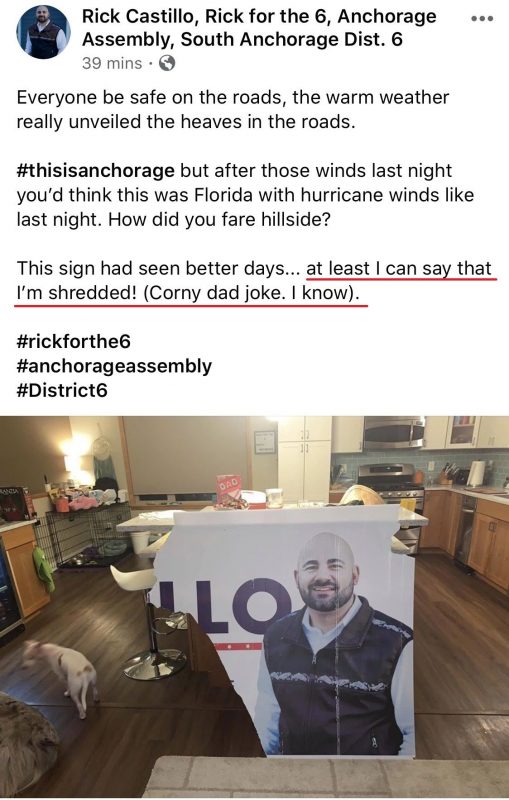 There is a lot going on in this flyer for Christine Hill’s latest fundraiser. Kudos to Christine – Asia Garden is an amazing place to have a political fundraiser. But, what I think everyone really wants to know is… WHAT IS IN HER MOUTH?!!!! 😱 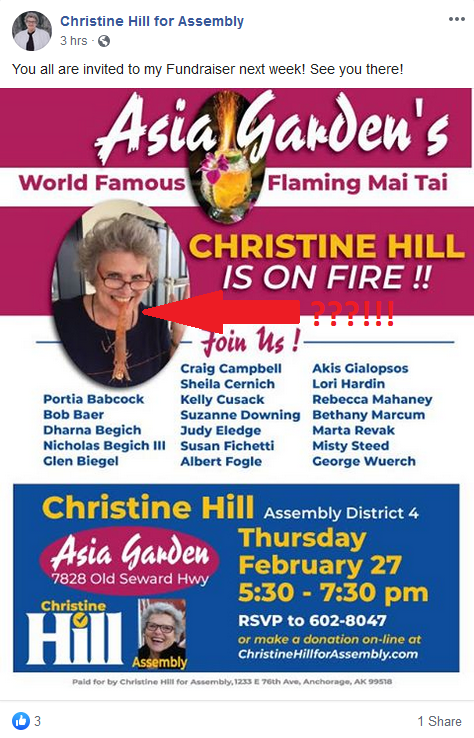 I mean, after that last post, I don’t blame them. 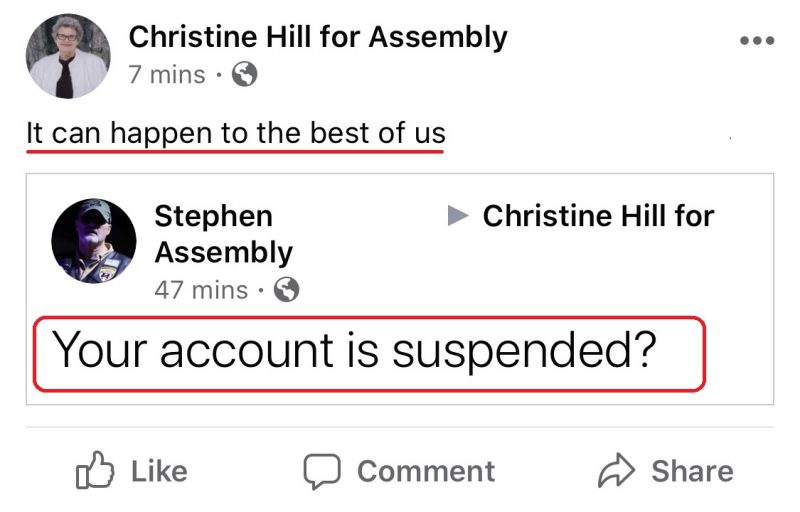 Not to be outdone, MoHagani Magnetek is trying to reach voters via original memes and “through the stomach.” While I’m not sure photos of tofu and seaweed are the way to every voter’s heart, if it’s going to work anywhere it would be Spenard. 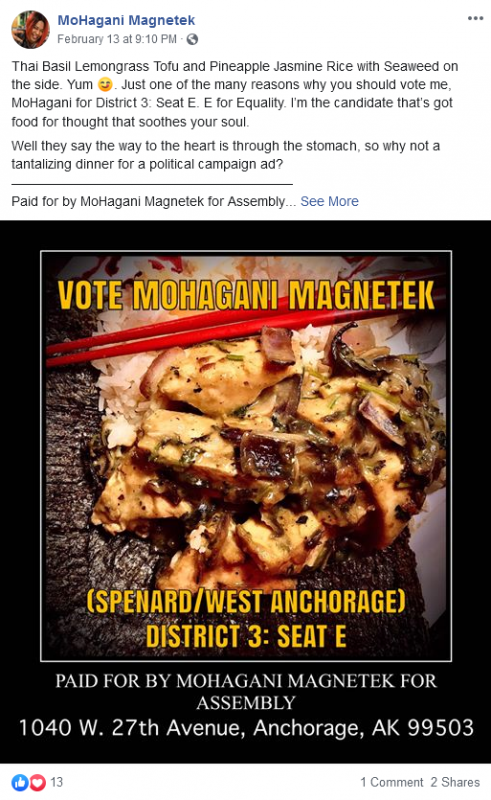 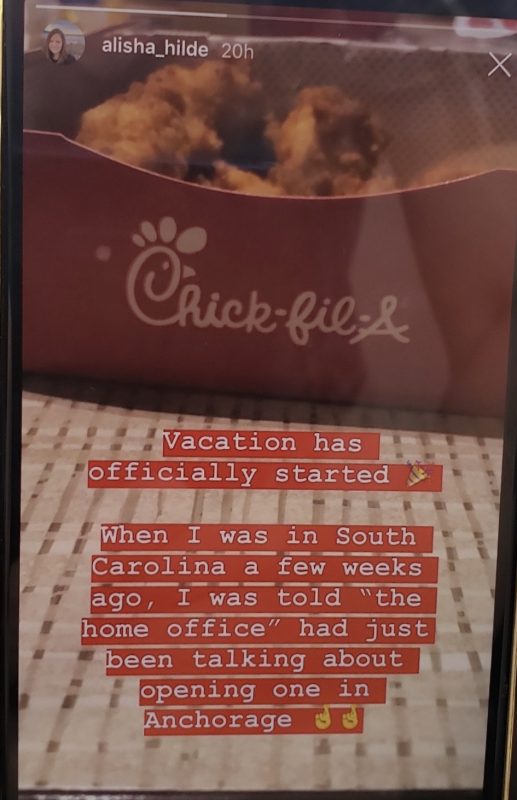 Spotted on a recent Juneau to Anchorage Flight: Sen. Cathy Giessel, Sen. Josh Revak, Rep. Chuck Kopp, Rep. Jennifer Johnston, Rep. Gabrielle LeDoux,  and Rep. Ivy Spohnholz. According to our tipster, “Kopp and Johnston were a bit late and raced to the front of the line to board the plane. Johnston dropping her bag multiple times in the process. Sen. Revak also didn’t wait in line. Nice to see Spohnholz and LeDoux stick it out at the end with the working folks and sports teams.” 👀

Spotted on L Street in Anchorage outside New Sagaya City Market. Shea it ain’t so! 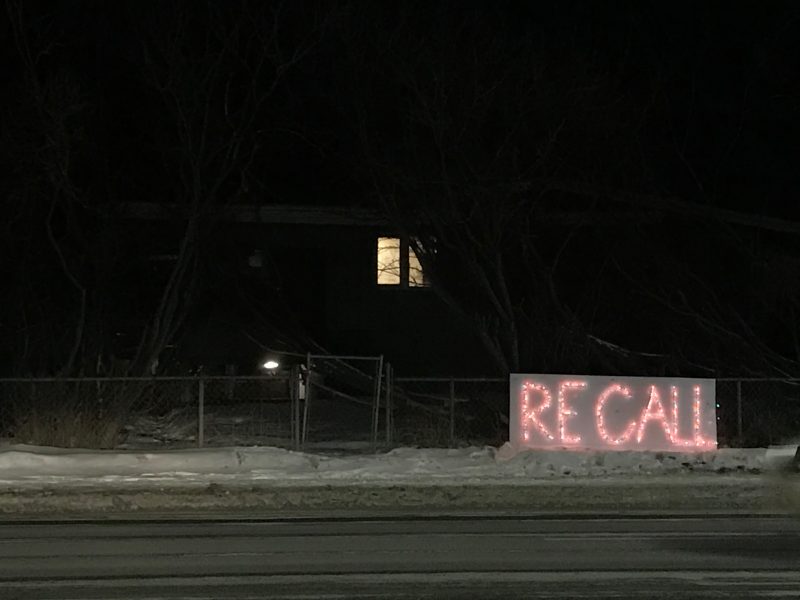 Overheard in Juneau: “Sen. Kawasaki should sponsor an amendment to the lotto bill that would open up the #akleg March Madness pool statewide!”

The answer to this week’s “Guess the Politico” is candidate for Congress, Alyse Galvin! 💛💛💛 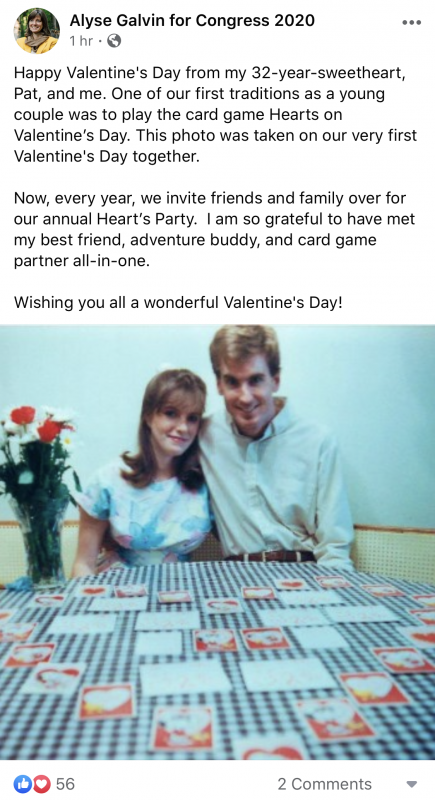 Too bad Crawford couldn’t run. I can’t wait for someone to run against Natasha so they can ask her about Campbell Lake.