I hope everyone enjoyed the Thanksgiving holiday. As usual, our elected officials shared a wide array of Thanksgiving related posts. Here’s a short list of our favorites. Sen. Mike Shower posted this boomerific meme on his official State Senator Facebook page. 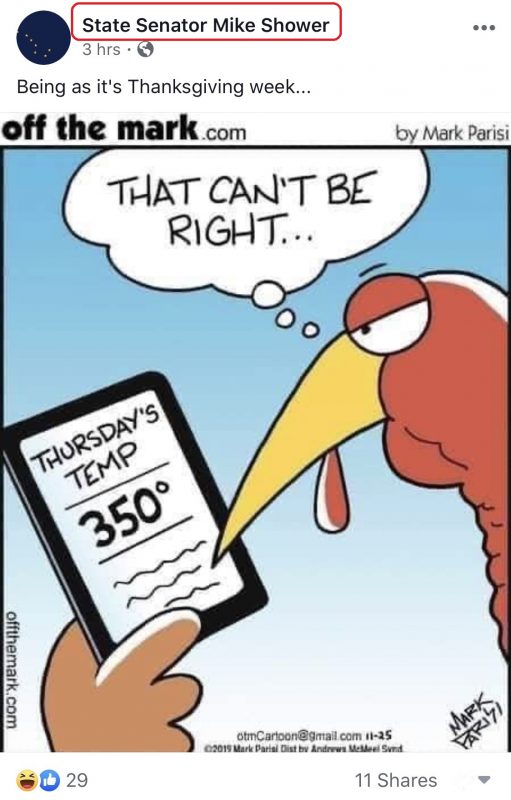 Check out this now deleted low tech Thanksgiving greeting from Sen. Lora Reinbold. Yes, she actually posted a picture of her computer screen to her official Facebook page. But my favorite part is the open tabs at the top of the screen: one is figuring out graphic design, and the other is public domain turkeys. 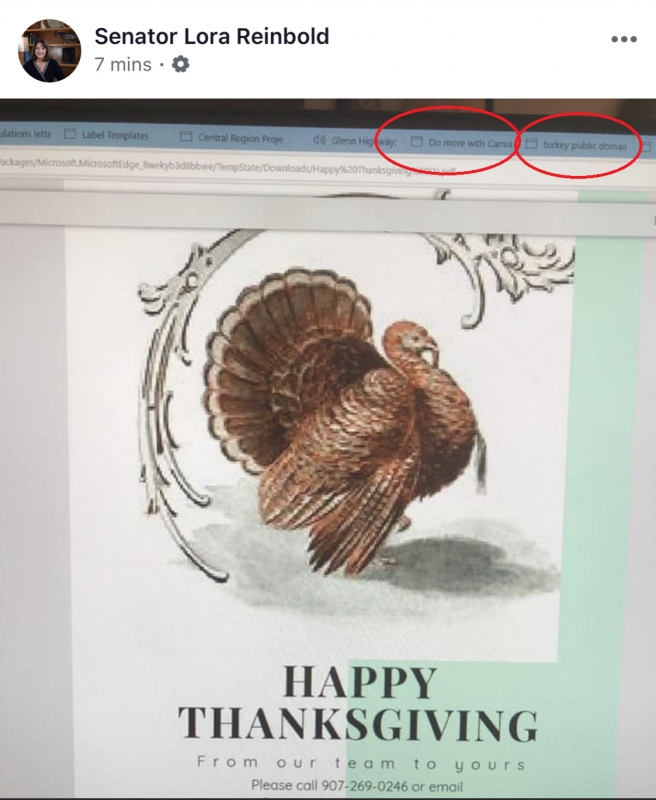 Sen. Josh Revak is every dad on Thanksgiving: forcing everyone to make memories only to fall asleep right in the middle of everything. ?? 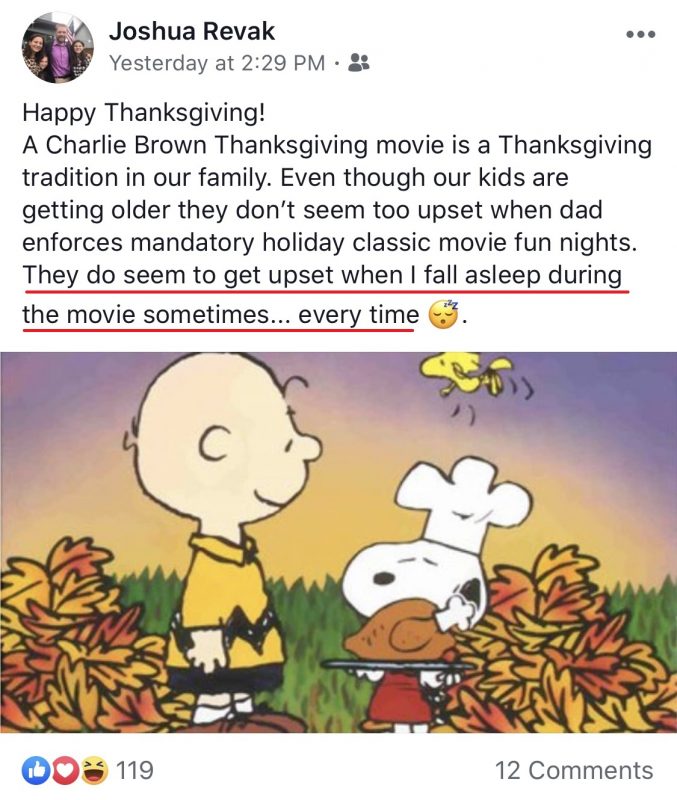 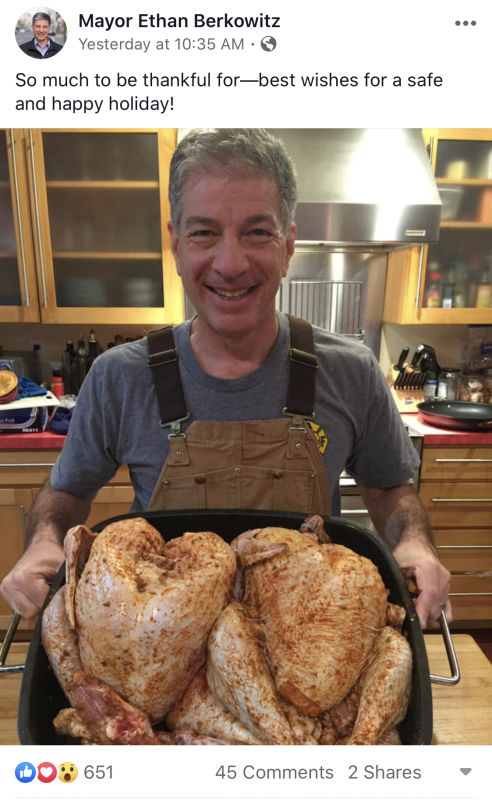 Part-owner of Great Northern Cannabis, former Rep. Andrew Halcro, posted his annual reminder to “know before you go… marijuana is legal in Alaska” This year a couple notable folks chimed in with that cannabis gravy recipe making the rounds.

I can only hope that one day Great Northern Cannabis will get to celebrate their 8 millionth ounce, just as Kinross Gold did in November. 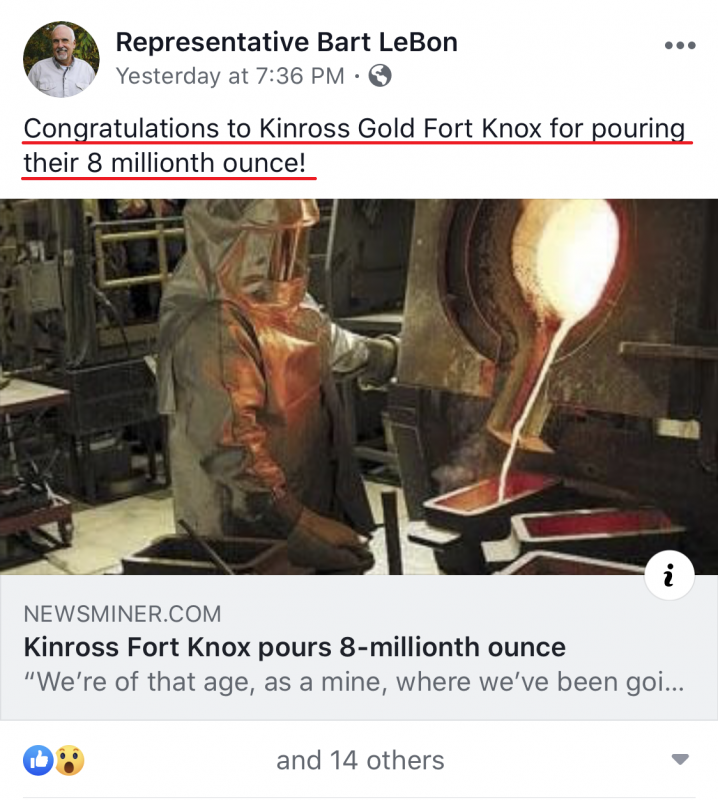 Sen. Lisa Murkowski participated in the annual “Sleep Out” fundraiser for Covenant House, where politicos, executives, and other folks sleep outside overnight to raise awareness and support for homeless youth. Lisa balked at the “fancy” tent set up and instead slept in near freezing temperatures in a large Home Depot box with an Alaskan Flag for a door. 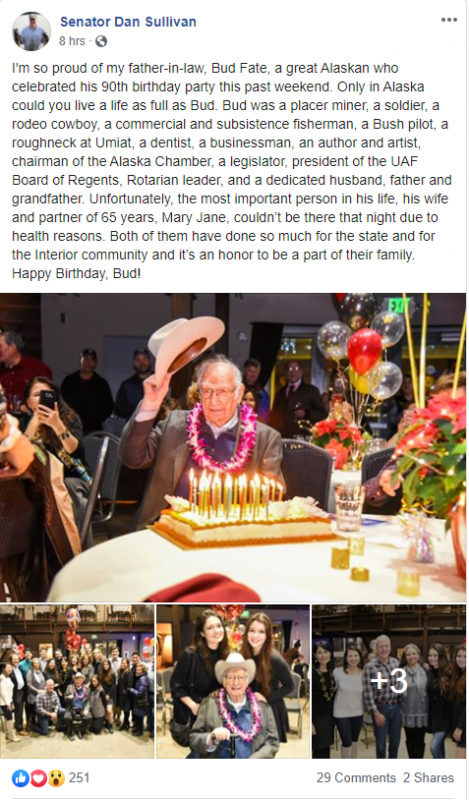 Gov. Mike Dunleavy celebrated his one year anniversary as governor by pledging to do a better job at communicating with the public. So far, this is one promise he’s kept. Three dozen combined Facebook, Twitter, and Instagram posts in 24 hours seems a bit excessive. Slow down, Mike! But my fav was when he Tweeted at Elon Musk and Tesla on Twitter. Does Mike want an official State of Alaska Cybertruck?

Hey @elonmusk & @Tesla: Let’s talk about utilizing #Alaska’s vast resources to help build #Tesla cars and the new Cybertruck. Nobody in the world balances resource development and environmental stewardship better than us.

COME TO THE ZOO, MEET YOUR ELECTED OFFICIALS: If you live in District M, you otter check this event out, it’s gonna be a hoot! Zoo or false: does District M have a new representative and senator? We all know Juneau’s the real zoo, but don’t miss your chance to address the elephants in the room and let them know how you feel.? 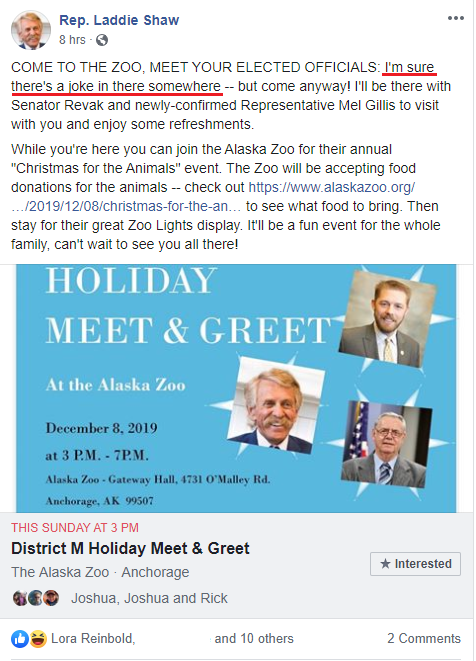 A friendly AK Stalker congratulations to newly-confirmed Rep. Mel Gillis. While he doesn’t have his official #akleg social media set up yet, we might get a hint of what’s to come from his personal page. The last public Facebook post was from August. Scroll to the bottom of the column to find out how Mel voted in his is Trump a racist or not poll. ?? 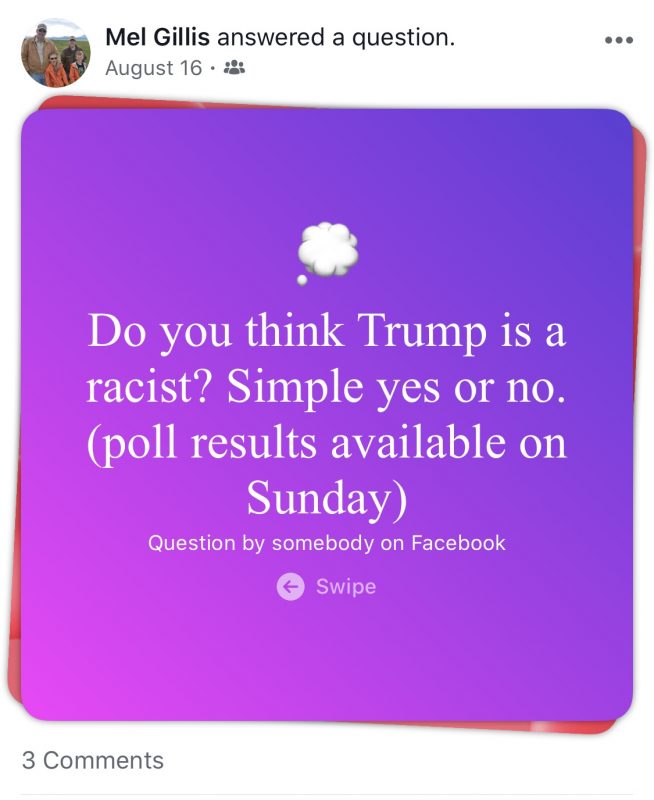 Girl dad and good sport, Sen. Peter Micciche, let his wallet go at Disney World over the holiday weekend. Peter, I know you’re not a Disney guy but where are your Mickey Mouse ears?! °o° ? 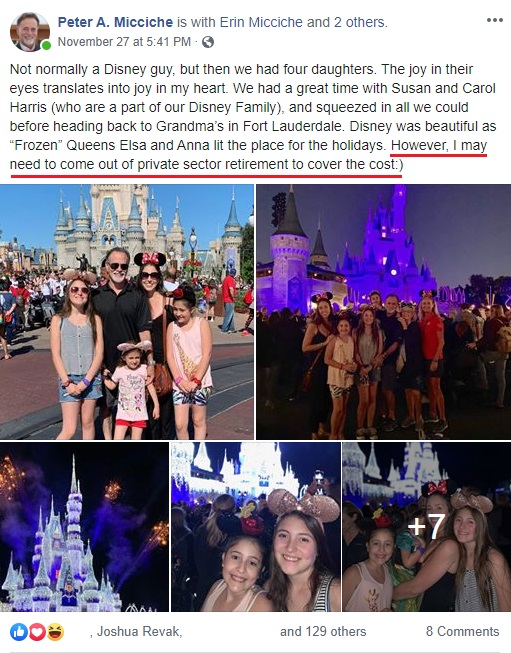 Sen. Jesse Kiehl is getting into the holiday spirit with a visit at work from Santa Claus. ? No word on if Jesse was naughty or nice this year. 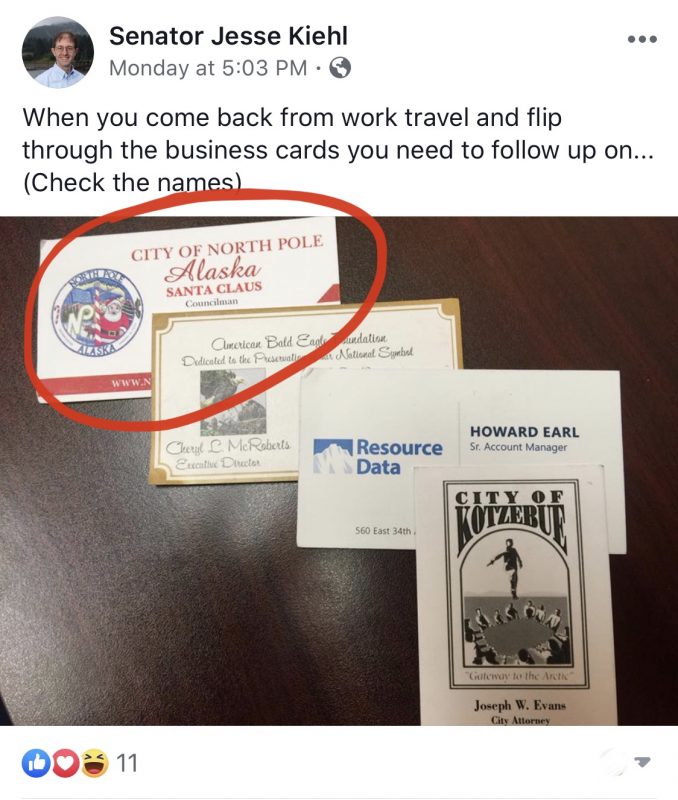 You would think with Christmas just around the corner Santa–excuse me, I mean City Councilman Claus, would be too busy for politicking. But somehow he managed business trips from North Pole to Juneau and Anchorage. Those suspenders tho! 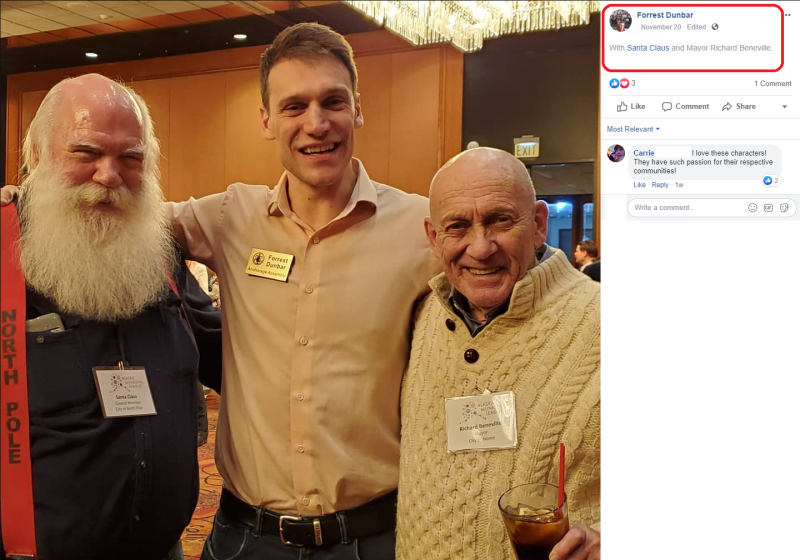 Spotted at Catalyst Cannabis Co.: With so many of Anchorage’s cannabis shops clustered downtown, you’d think Assemblymember Christopher Constant would keep it in his district. At least he’s shopping local. 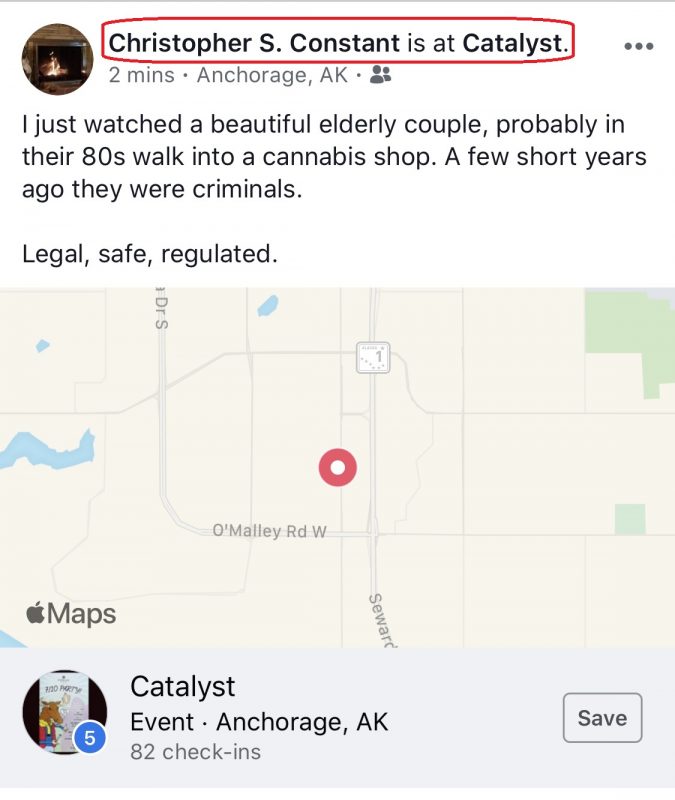 Every time you misuse an apostrophe on your holiday card, a reindeer will be made into sausage. https://t.co/p3GAtgmQgs 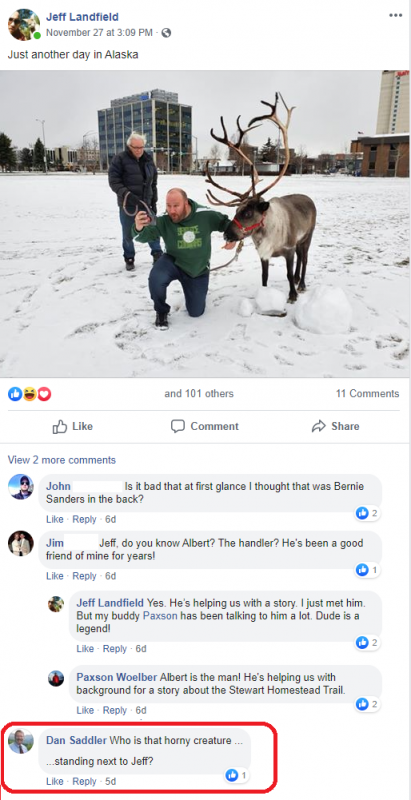 Overheard on the streets of Juneau right outside Amalga Distillery: “We’re having a statewide legislative information office staff get together in here right now and when he (nod to David Teal standing next to her) walks in, it’s going to be like Elvis!”

And now for Rep. Mel Gillis’ answer to the question, “Do you think Trump is a racist?” There you have it, folks. 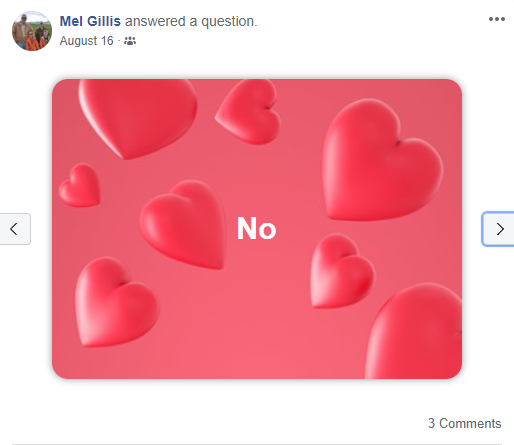 As a member of the guerrilla arm of the Apostrophe Society (AKA: A Black Sharpie and a Balaclava), I want to support Leslie’s stance. But as someone with an Irish last name I do think she needs nuance!

Hahaha. How about no apostrophes at the end of a name?

Oh, Apostrophe – so few truly understand thy mysteries (or will get this joke.)