Once upon a time there were three Facebook polls. Each poll was designed to find out what size PFD Alaskans support. The first poll was too left. The second poll was too right. The third poll was just right. And so the third poll got the most votes and engagement and lived happily ever after with a $3,000 PFD. The end.

About that first poll… Did pollster Ivan Moore forget to switch over to his personal account before this rant, or is this business as usual at Alaska Survey Research? Way to keep it classy, Ivan. 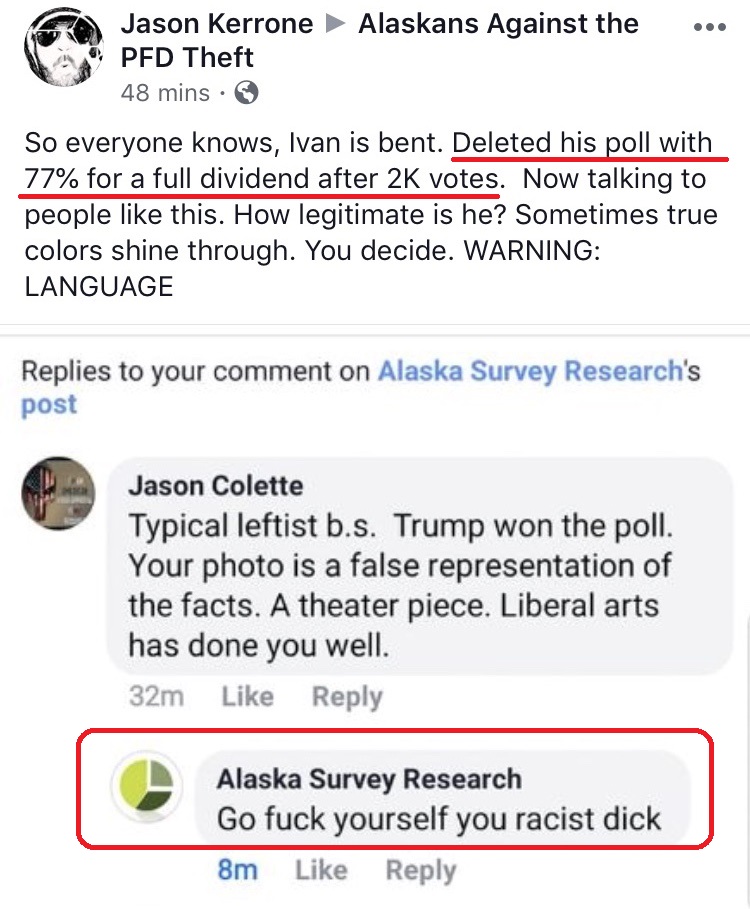 A friendly Stalker reminder: Facebook polls aren’t anonymous. ? That’s why I never participate. Either way, thank you to all the Senators, Representatives, candidates, public figures, and regular folks who weighed in. We have the receipts!

Julia O’Malley’s most recent column in the ADN pairs Alaska food with Alaska politics, making it one of the best things we’ve read in awhile. However, I think Julia might be confused. Everyone knows to leave your excess zucchini on the porch of your ENEMIES. Let them figure out what the hell to do with it all. 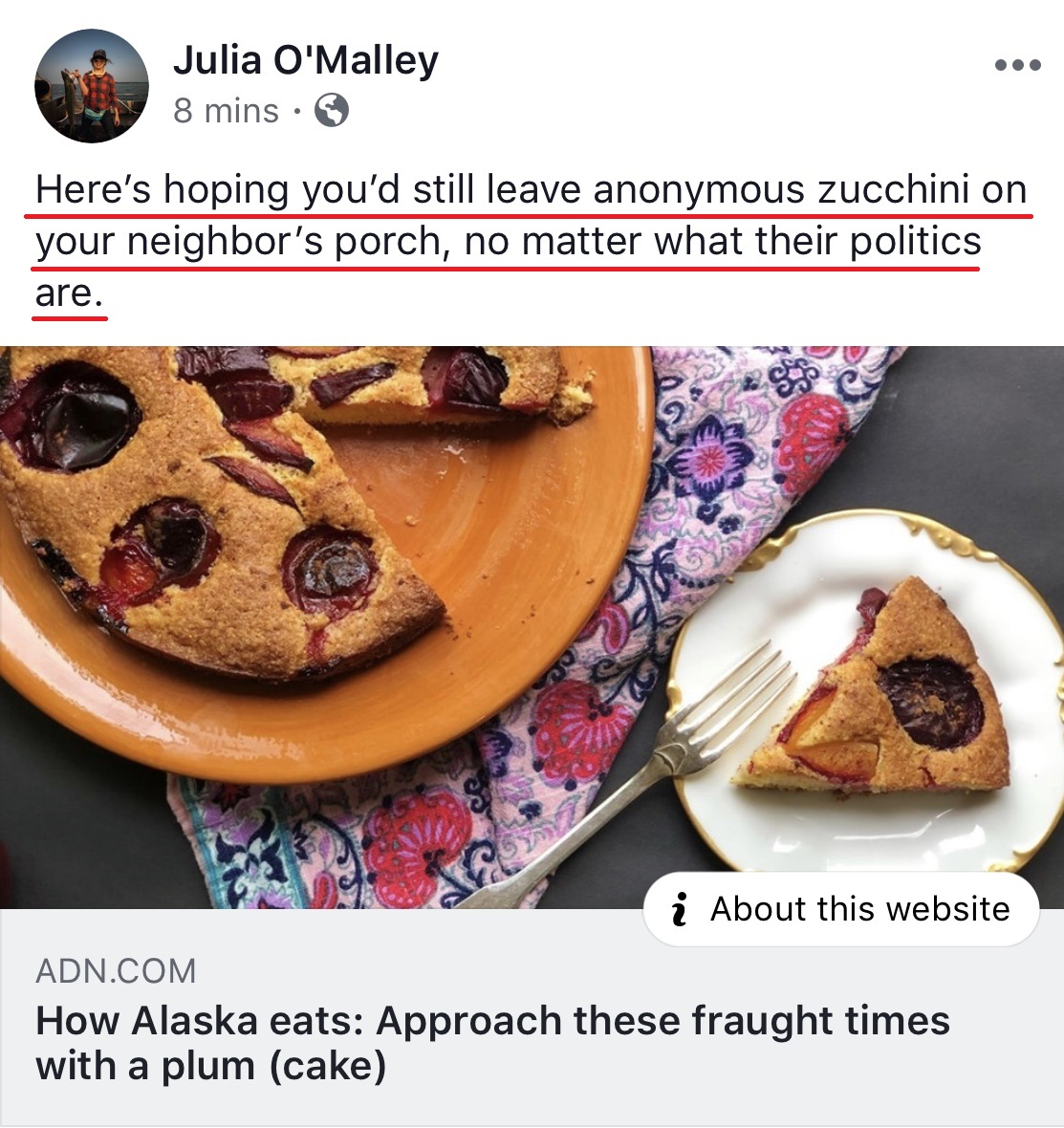 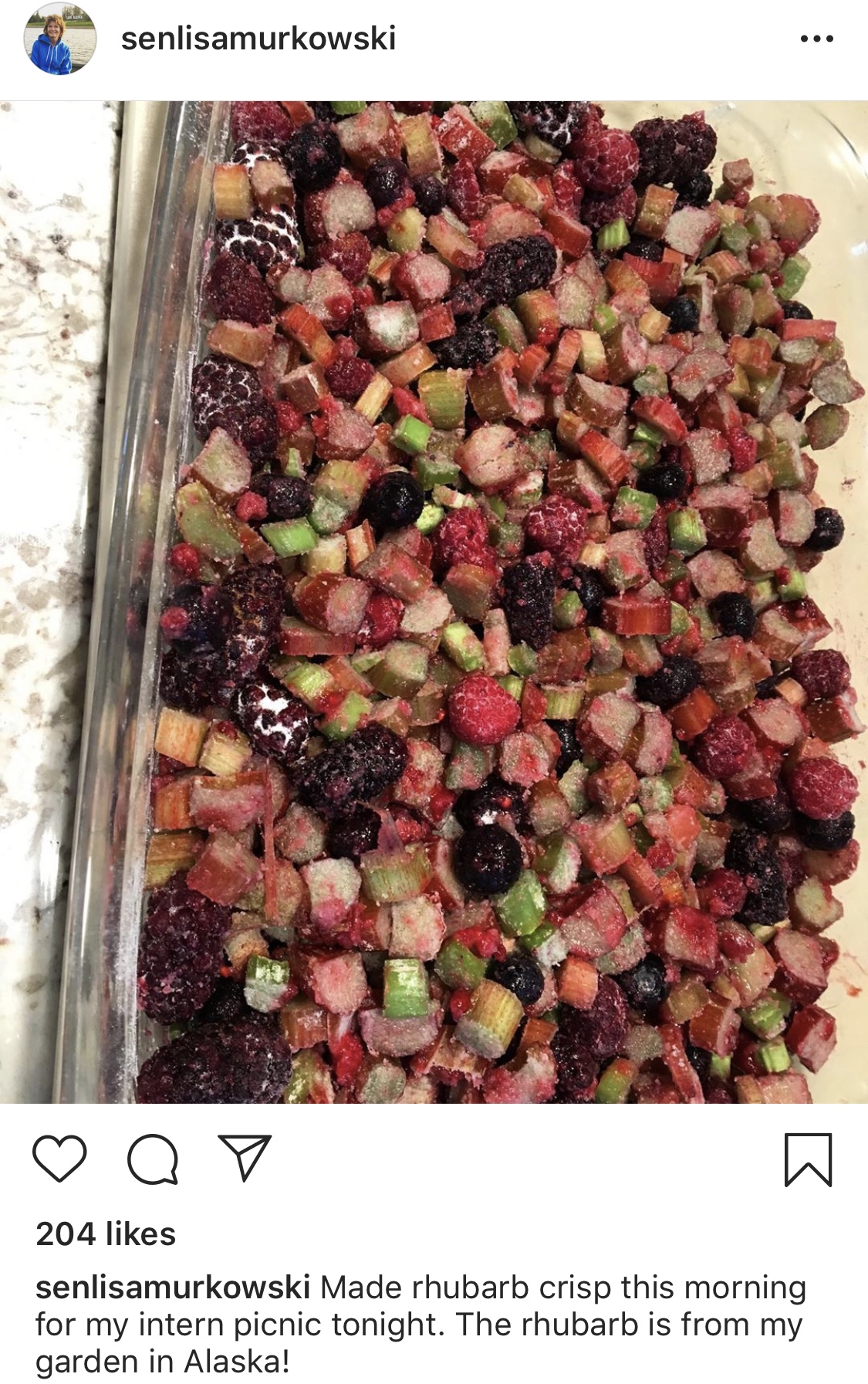 Ted Steven’s Day was July 27th. I hope everyone was able to get outside and play for a bit. Check out some heartfelt tributes from Congressman Don Young, Sen. Lisa Murkowski, and House Speaker Bryce Egdmon. But our favorite Ted Steven’s Day Tribute is also another round of guess the legislator. Click here to find out who interned for Uncle Ted back in 1979. 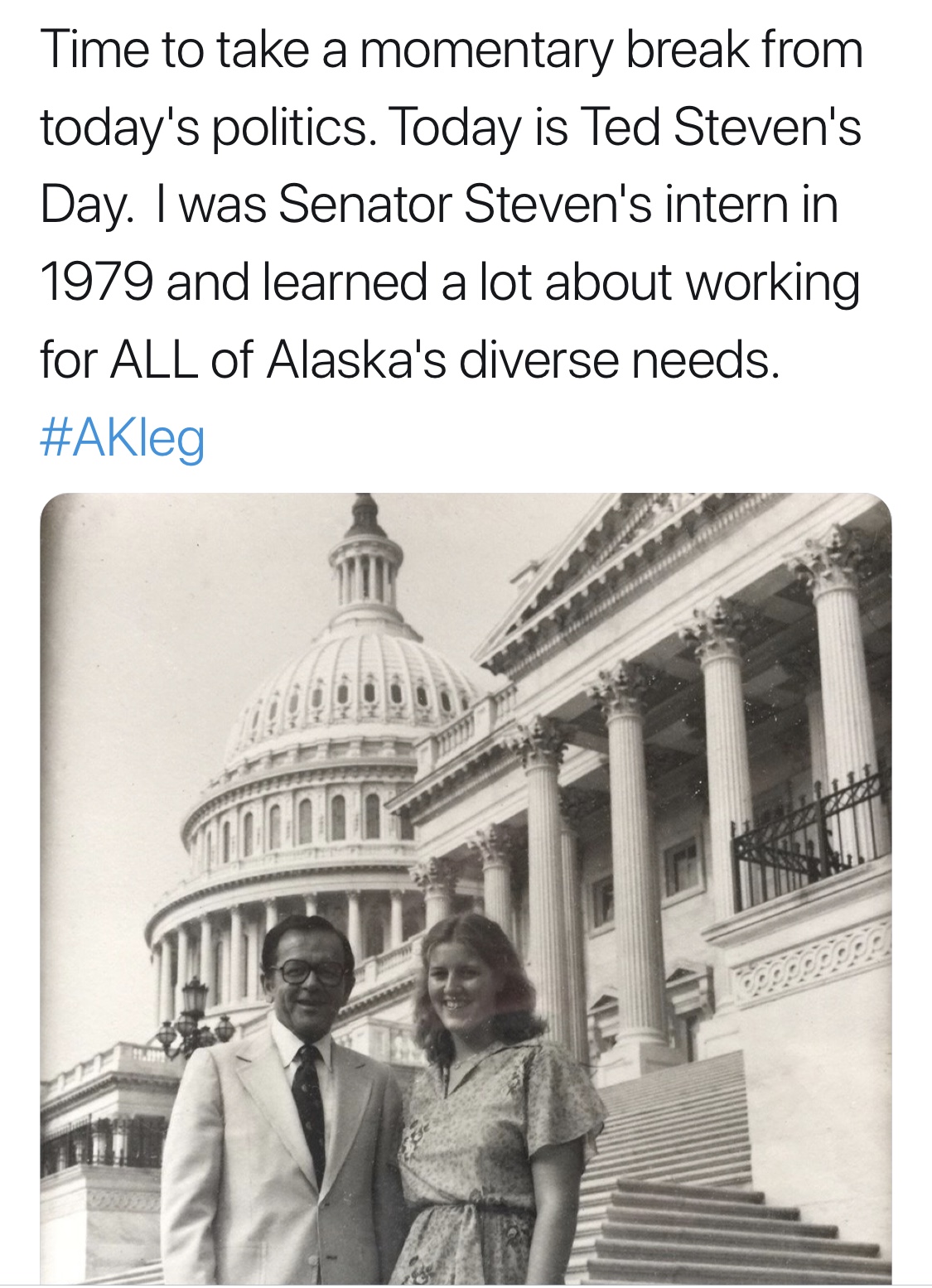 The Inlandboatman’s Union strike went national this week when Former Vice President Joe Biden and Senator Bernie Sanders tweeted in support of the workers. While Joe and Bernie were there in spirit, Candidate for U.S. Senate, Dr. Al Gross, traveled to Juneau to physically stand with ferry workers on the picket line. “Where are you Dan Sullivan?” Dr. Gross posted. 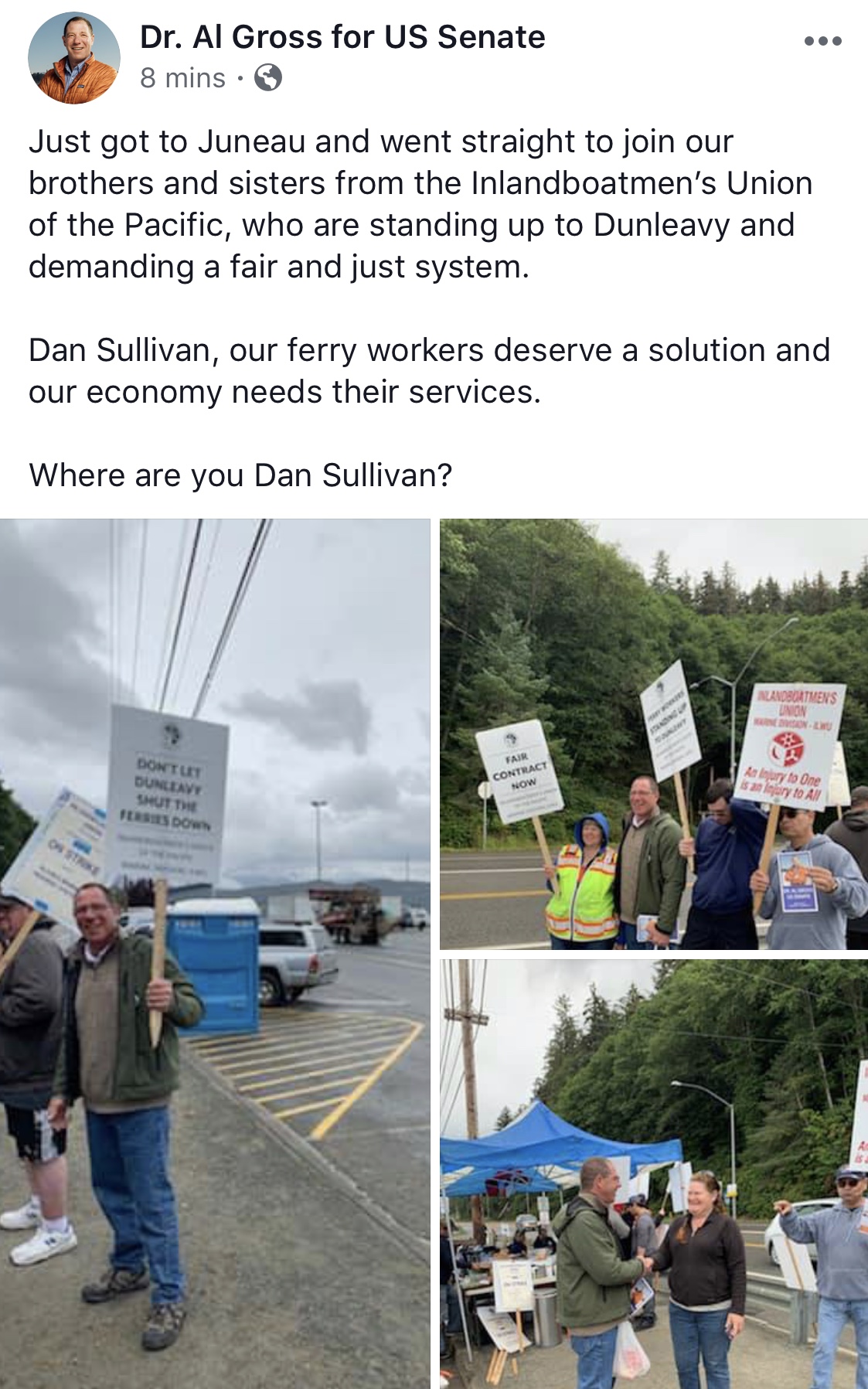 Well brothers and sisters, he’s shooting hoops with Senator Ted Cruz! We were glad to see the big state triumphed over the small state. Way to go, Senator Sullivan. Now can you get back to fighting the deep state? 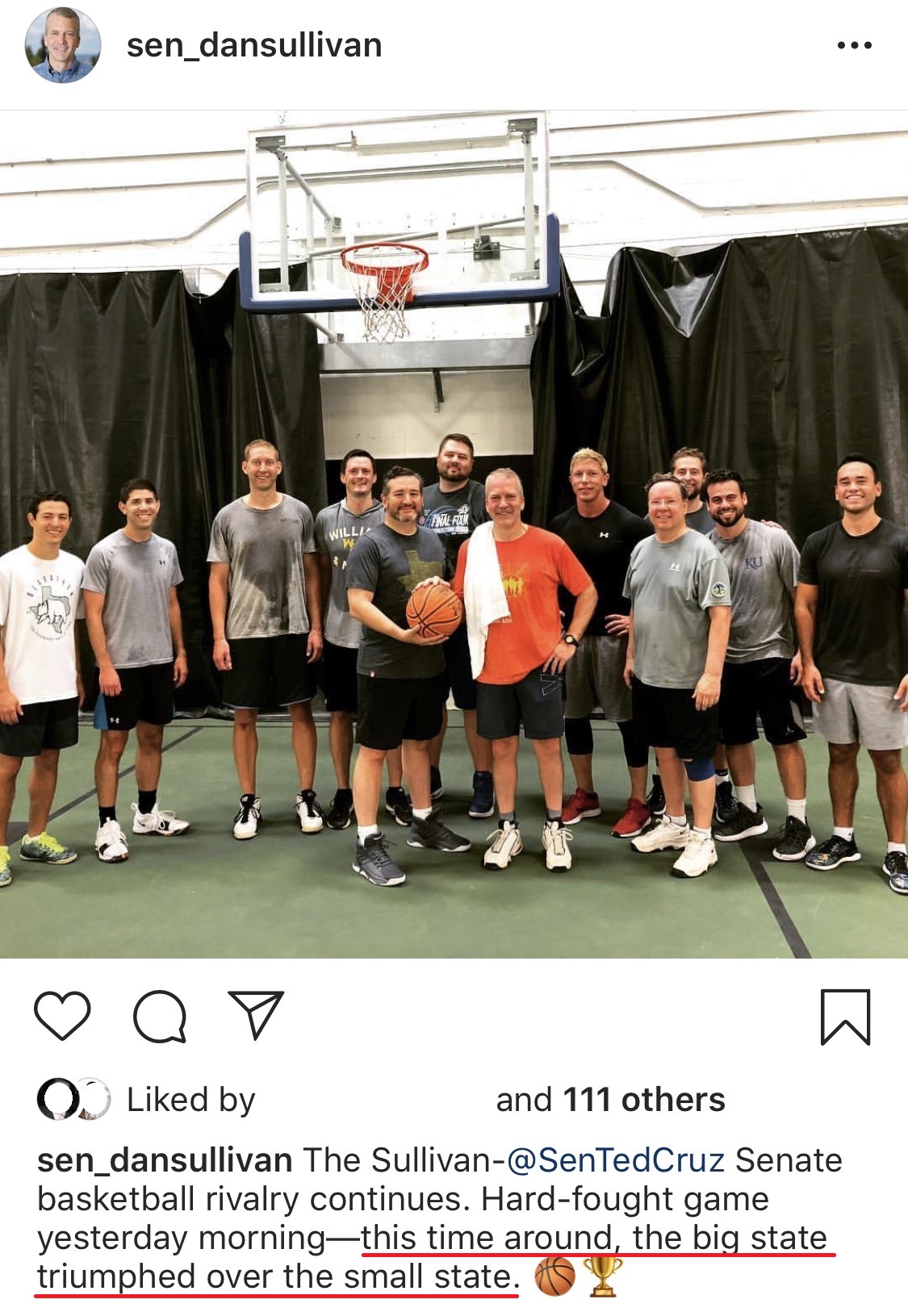 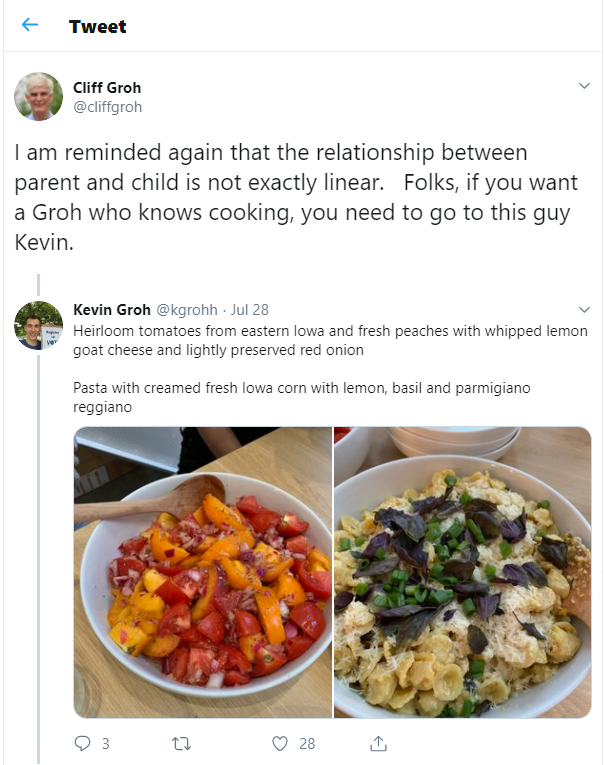 Groh up, Cliff: the bond between father and son should transcend politics. 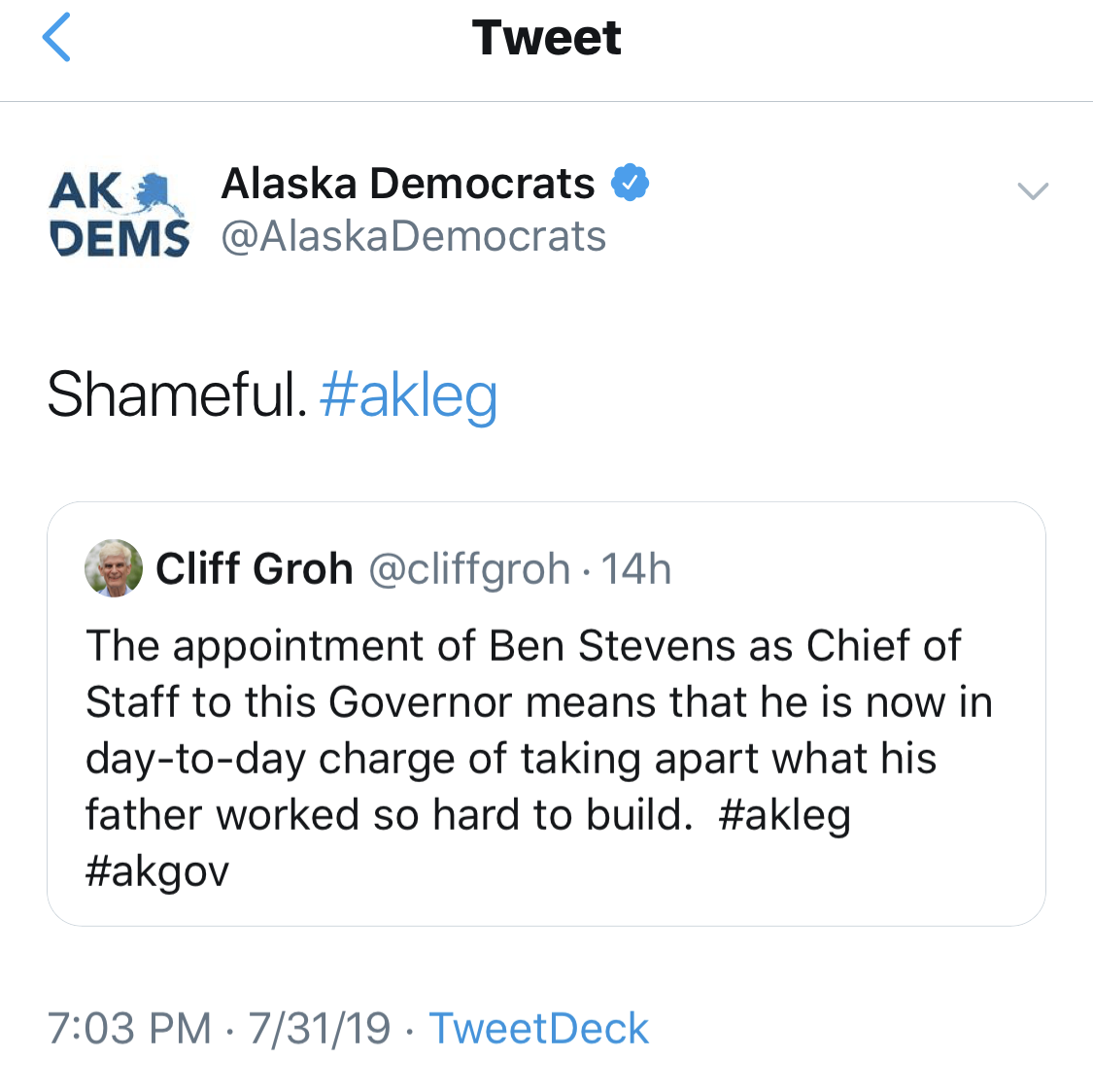 For those of you who haven’t heard, Former Sen. President, Ben Stevens, is Gov. Mike Dunleavy’s new chief of Staff. Former Chief of Staff, Tuckerman Babcock, “requested” to move to a senior policy adviser position. Sure. I mean, even the media doesn’t believe that. 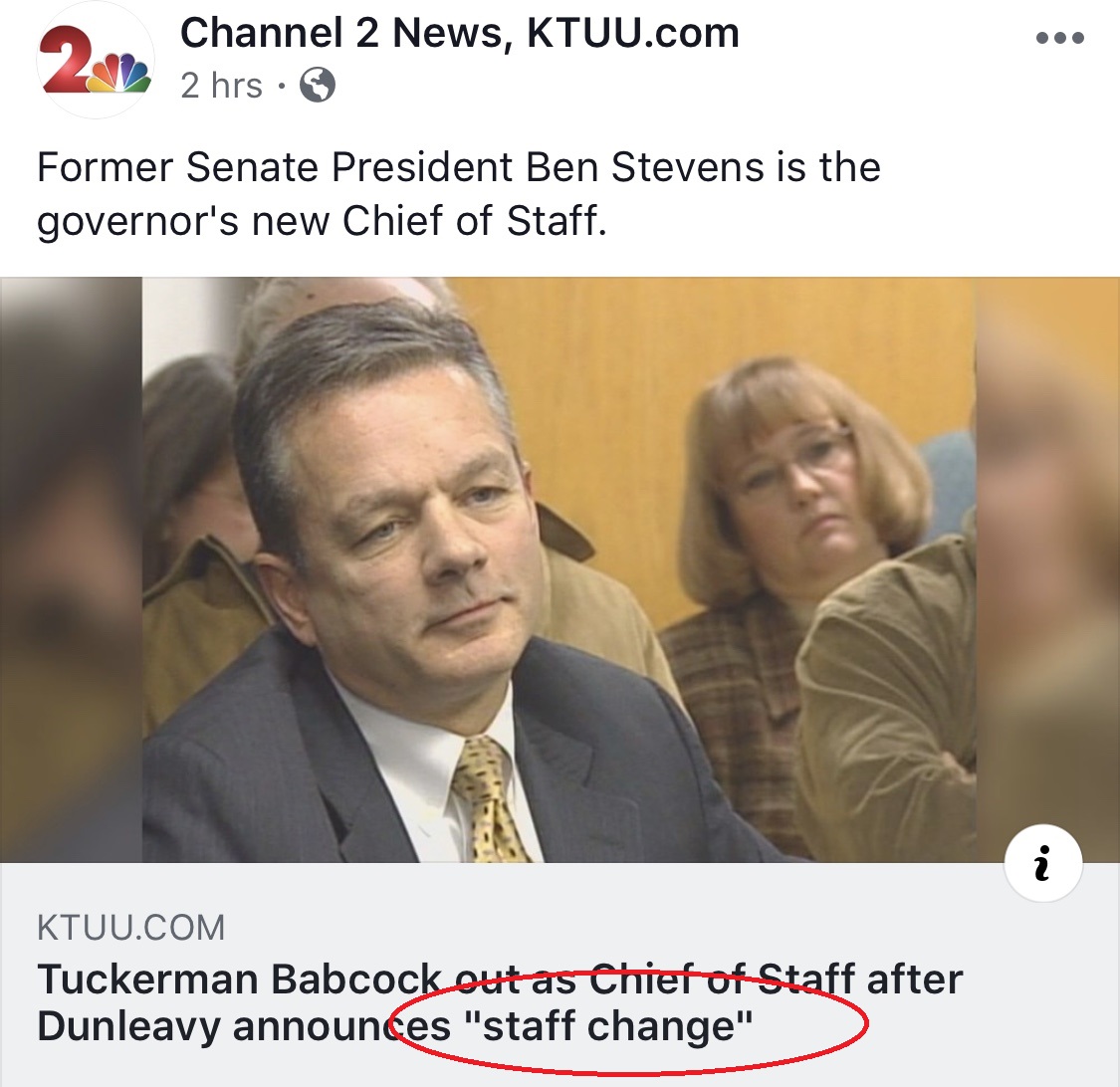 Congratulations, Ben. You might want to take this opportunity to change your Facebook profile pic. It’s bizarre. I’m looking forward to hearing all about how you’re actually worse than Tuckerman, how this was all an elaborate scheme for you to take power, and how you’re the real Governor. Do they have a crude nickname for you yet? I haven’t heard.

As things continue to break down, it’s up to Gov. Dunleavy’s Communications Director, Mary Ann Pruitt, to save the day. Don’t worry, she’s on the case. Following motivational speaker Michael Hyatt on Facebook will help Mary Ann unlock her potential and give her the “biggest leadership win in the next 90 days.” 90 days? Hmmm, maybe she should have followed Hyatt back in January… 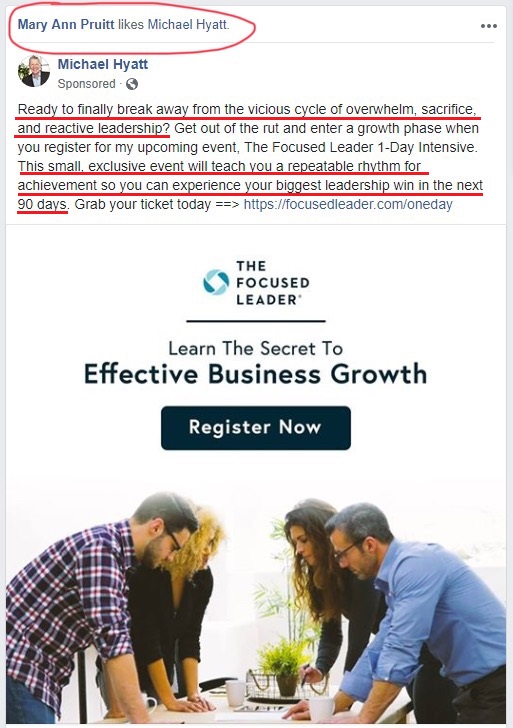 We searched high and low for some positive Gov. Dunleavy content this week. Other than a pretty favorable ratio on his response to the legislature’s proposed $1,600 PFD, content was scarce. Governor, please post a photo of your family or the first dog ASAP. In the meantime, here’s the best thing I could find: the opening shot screen grab of Gov. Dunleavy’s most recent video — an interview by “a totally random Alaska student.” As a favor to the Governor, I’m not posting the link. It’s a bit cringe worthy. And to my readers, orange you glad you’re not Dunleavy this week? 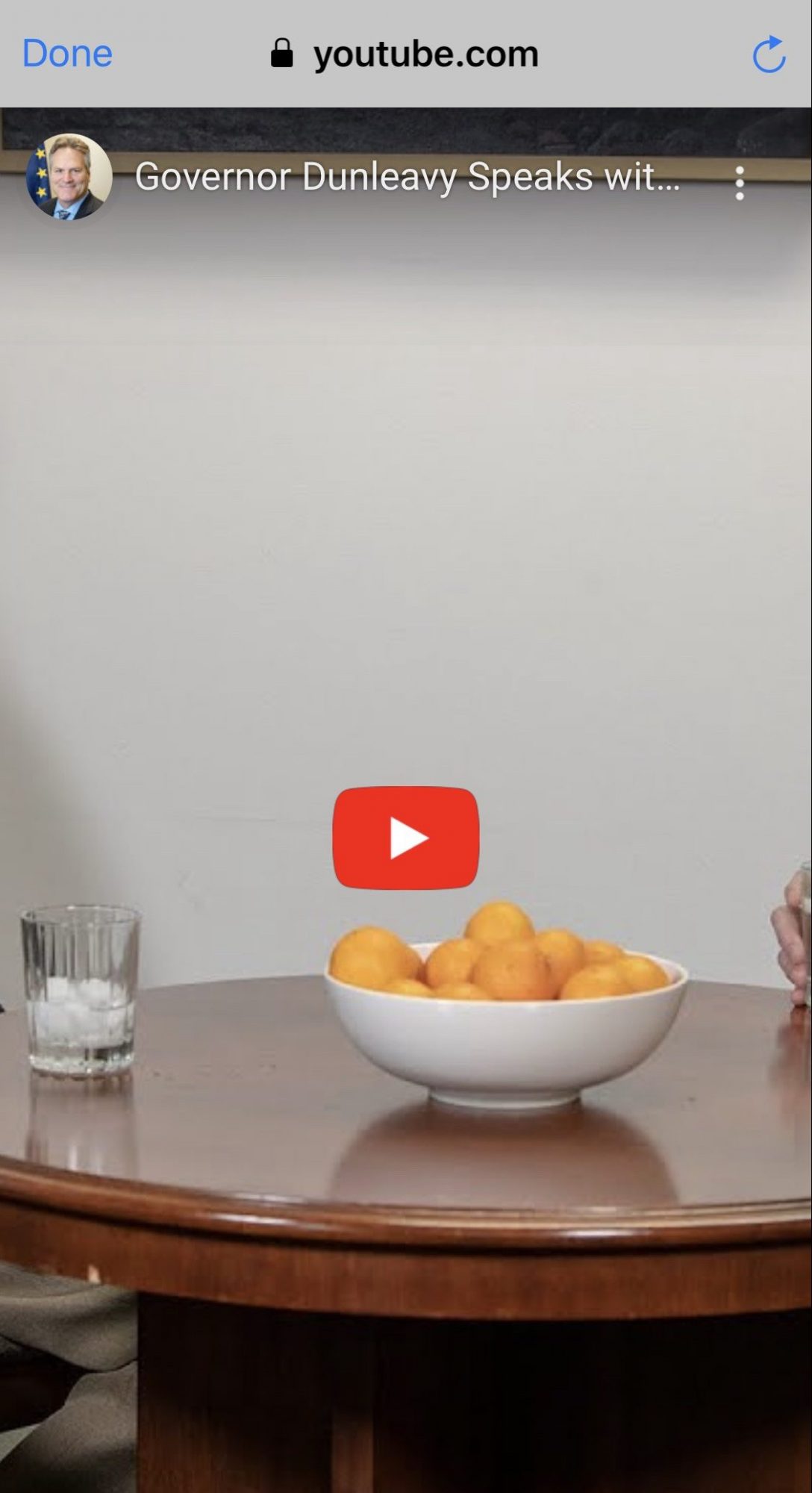 Thank goodness for Lt. Gov Kevin Meyer. Did I just write that sentence?! He provided us with some high quality cute dog photo content this week. It’s just what we needed. Thanks, Kevin! That t-shirt tho! 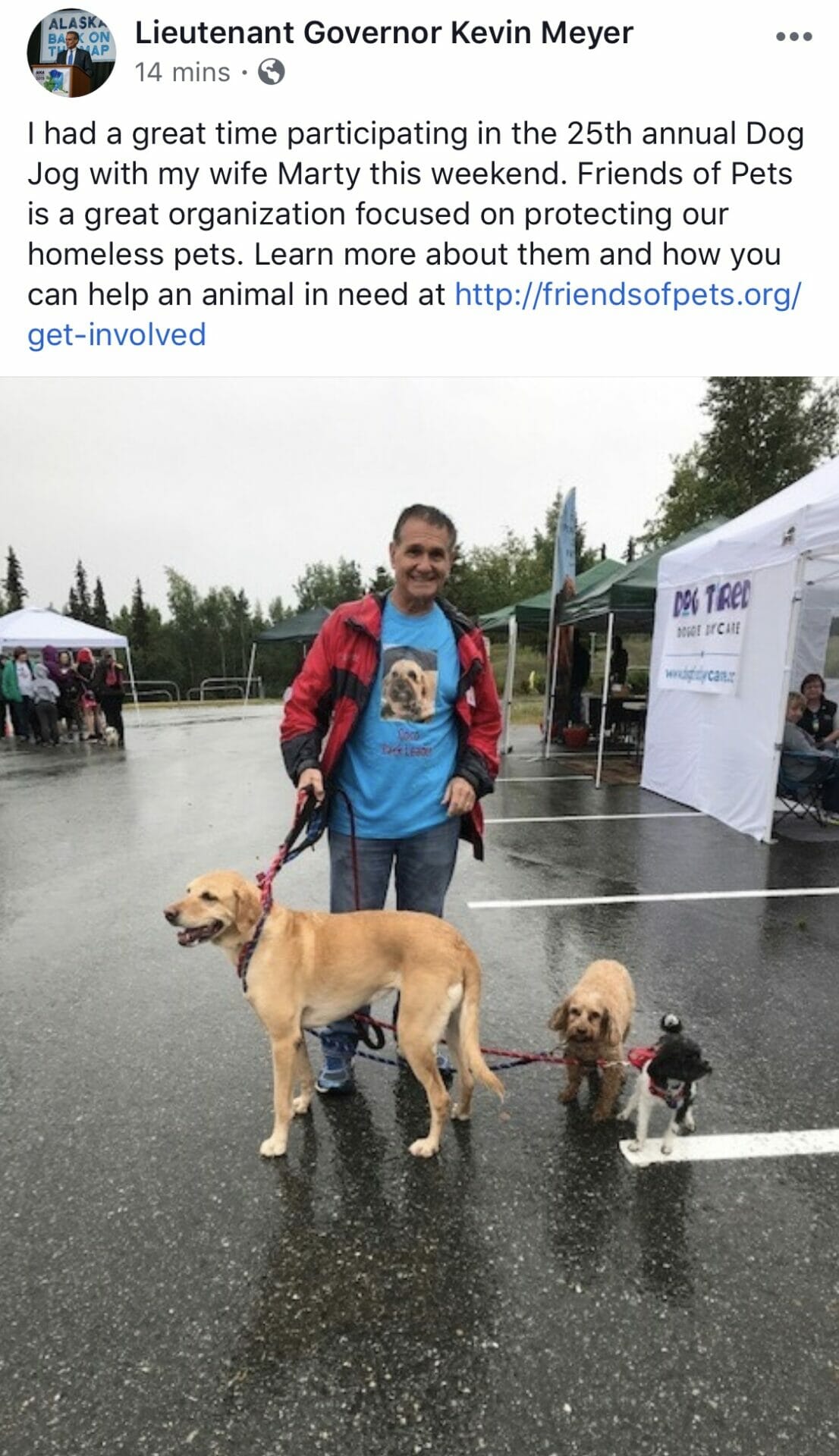 Savvy Facebook users will recognize that little gear symbol as a way to limit one’s posts to a select audience. Who is Sen. Lora Reinbold blocking from her official Senator page posts? Very curious. Enjoy that luxury while it lasts. 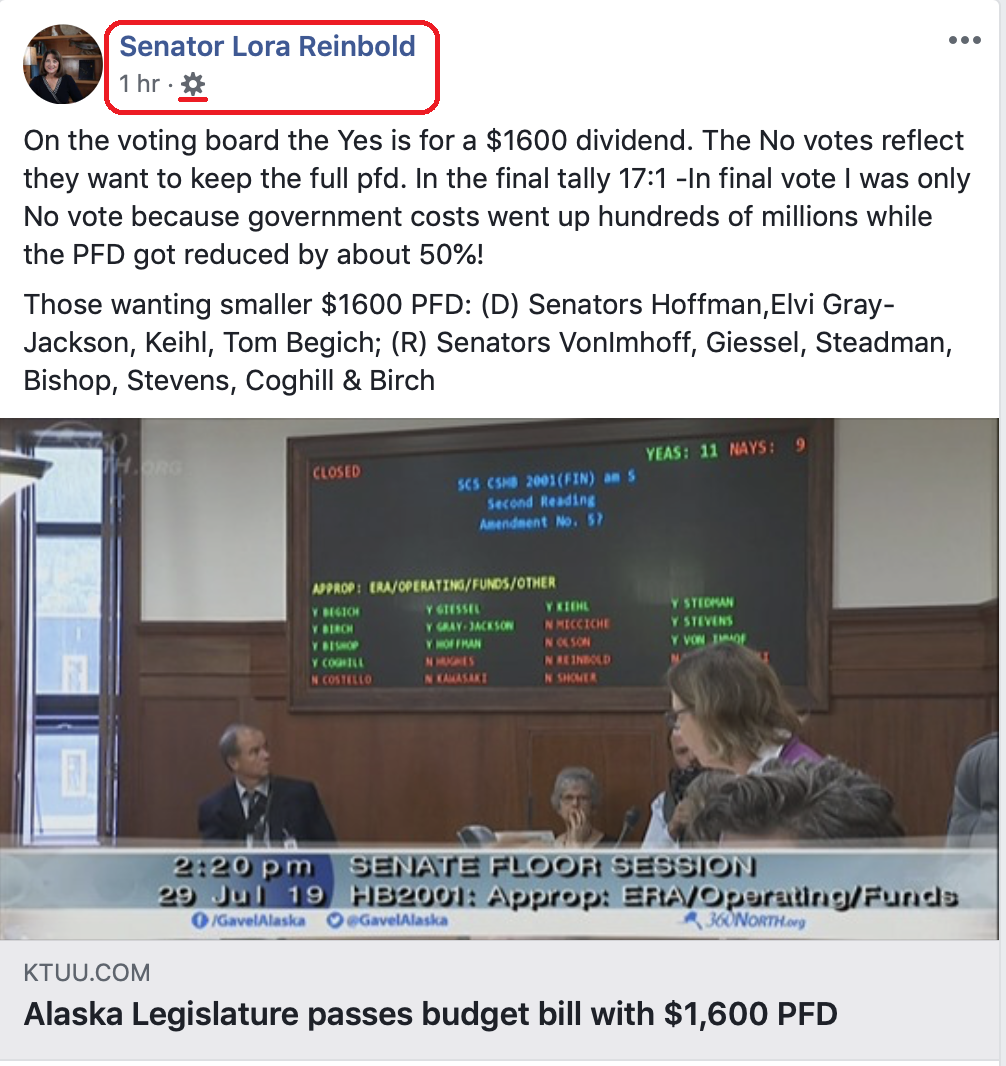 While some Senators choose to block, others choose to participate in thoughtful debate online. Check out this epic exchange between Senator Bill Wielechowski and former chief of staff to Governor Walker, Scott Kendall. I love a good Democrat vs. Republican disagreement. I bet Bill W. will get so triggered seeing this thread again! 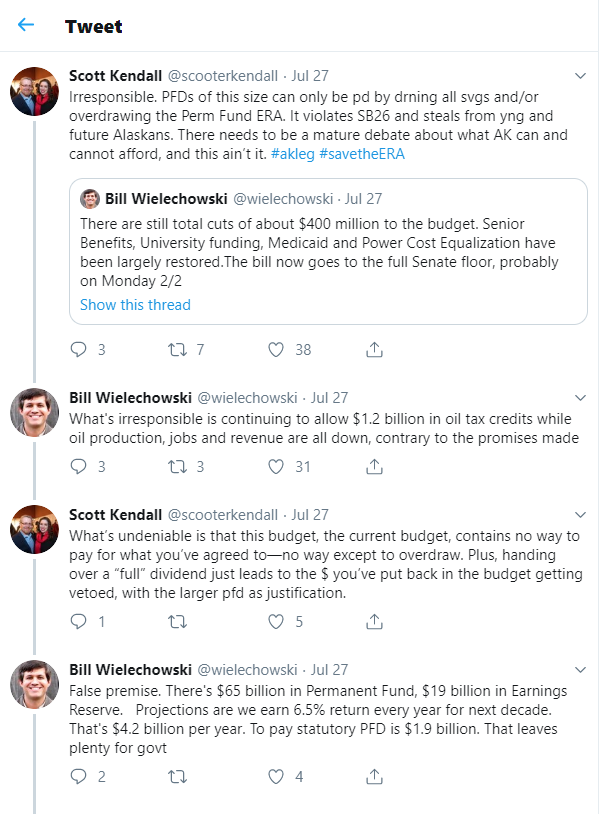 The Anchorage Republican Women’s club is throwing some passive aggressive shade at Senator Natasha von Imhof. It’s really not that interesting; everyone knows she’s a Rasmuson. Maybe instead of being catty online you should invite her to speak at your next meeting. Just saying. ¯\ _(ツ)_/¯ 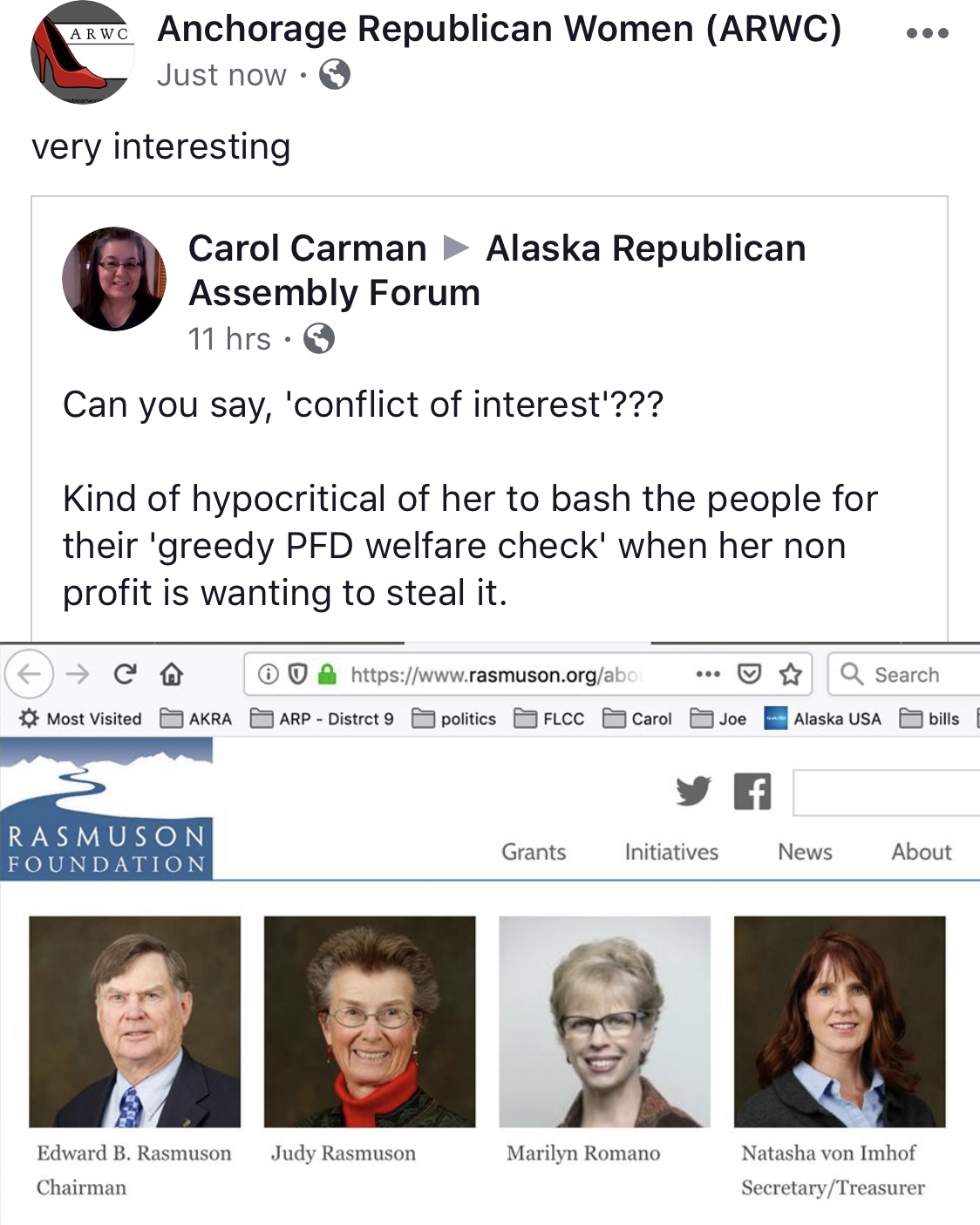 Over in the House, #peonygate has come and gone, but the ramifications continue to ripple through Facebook, most noticeably through my targeted ads. So creepy. 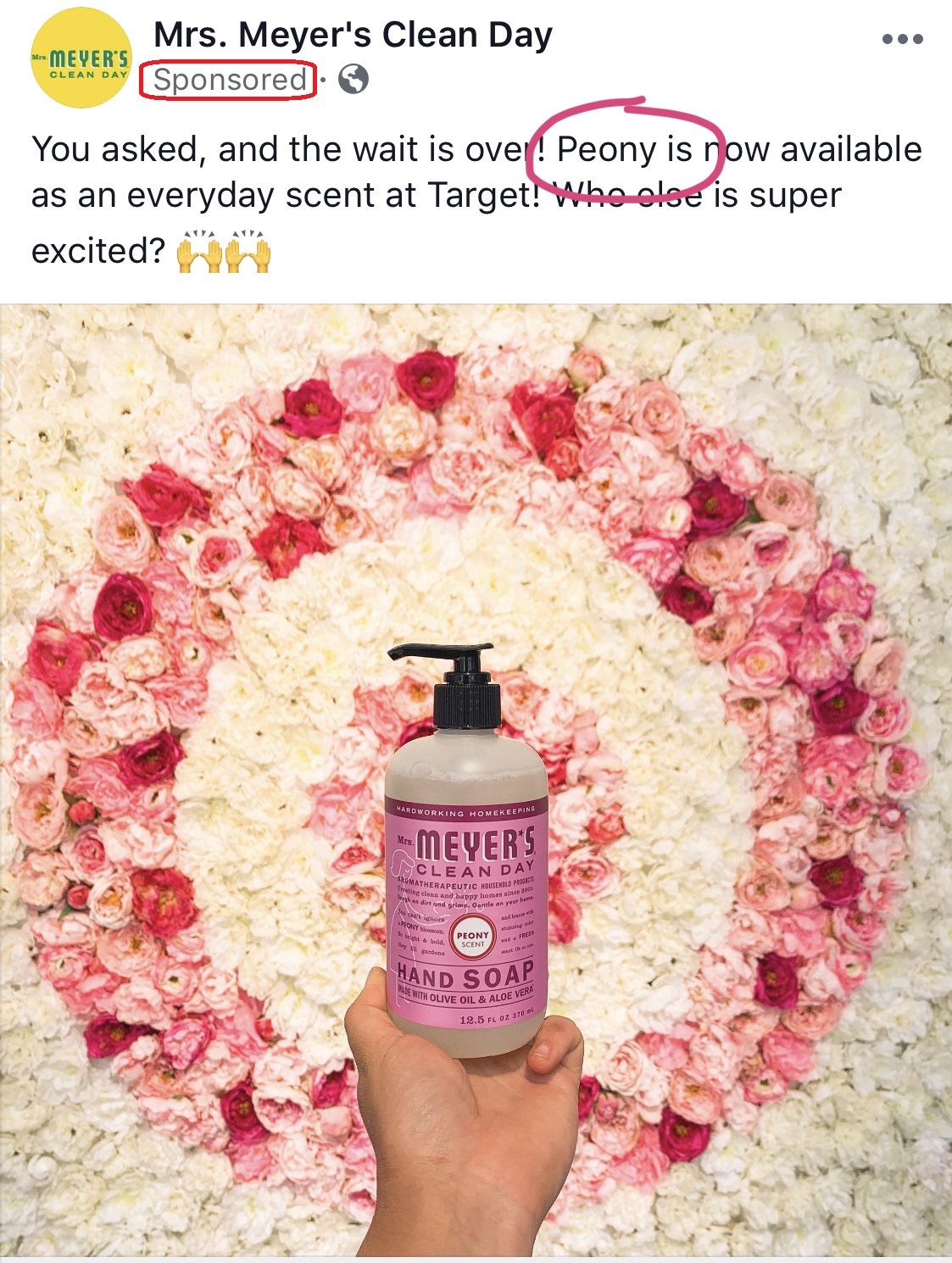 I’ve spent almost 15 minutes staring at this photo of Rep. Sharon Jackson. I’m pretty sure she’s giving everyone the finger. Or maybe that’s reserved for Alaskans who don’t want a full PFD. But seriously, how does someone miss what clearly looks like a giant middle finger and then decide this is the best photo to post on your official Representative Facebook page. I can’t even. Rep. Jackson is a gift! 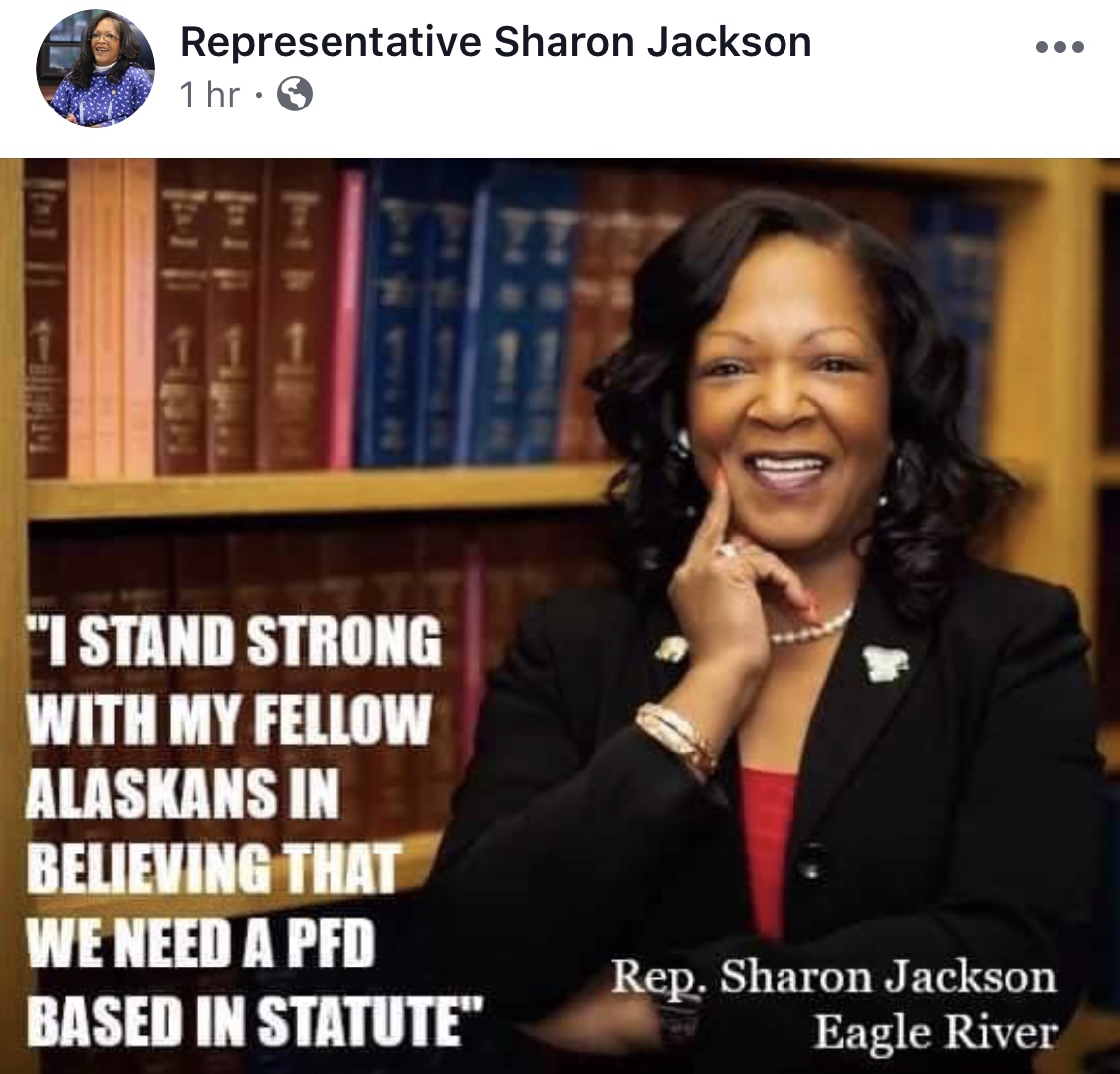 Rep. Chuck Kopp seems like he’s really enjoying his time in Juneau this session. “Friendships are forged in fire, and redefined by suffering.” Let’s see how he feels after another special session or two. Also, why aren’t Rep. Johnston and Sen. von Imhof tagged? If you’re not FB friends, are you really even friends? 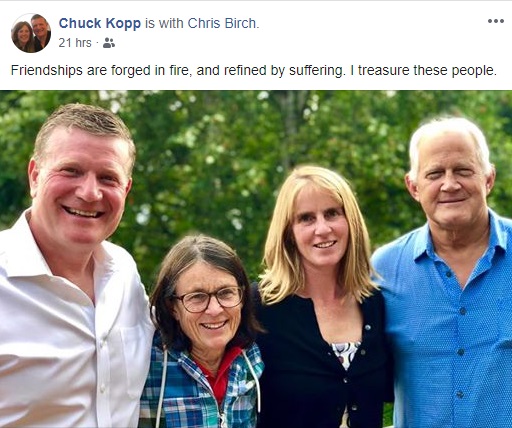 ***
House Minority Rep. Josh Revak also posted some introspective thoughts on life in Juneau and “making decisions based on integrity and with the best intent for the people you serve.” House Majority Rep. Gary Knopp, the deciding vote on the bi-partisan coalition, trolled him with a “like.” 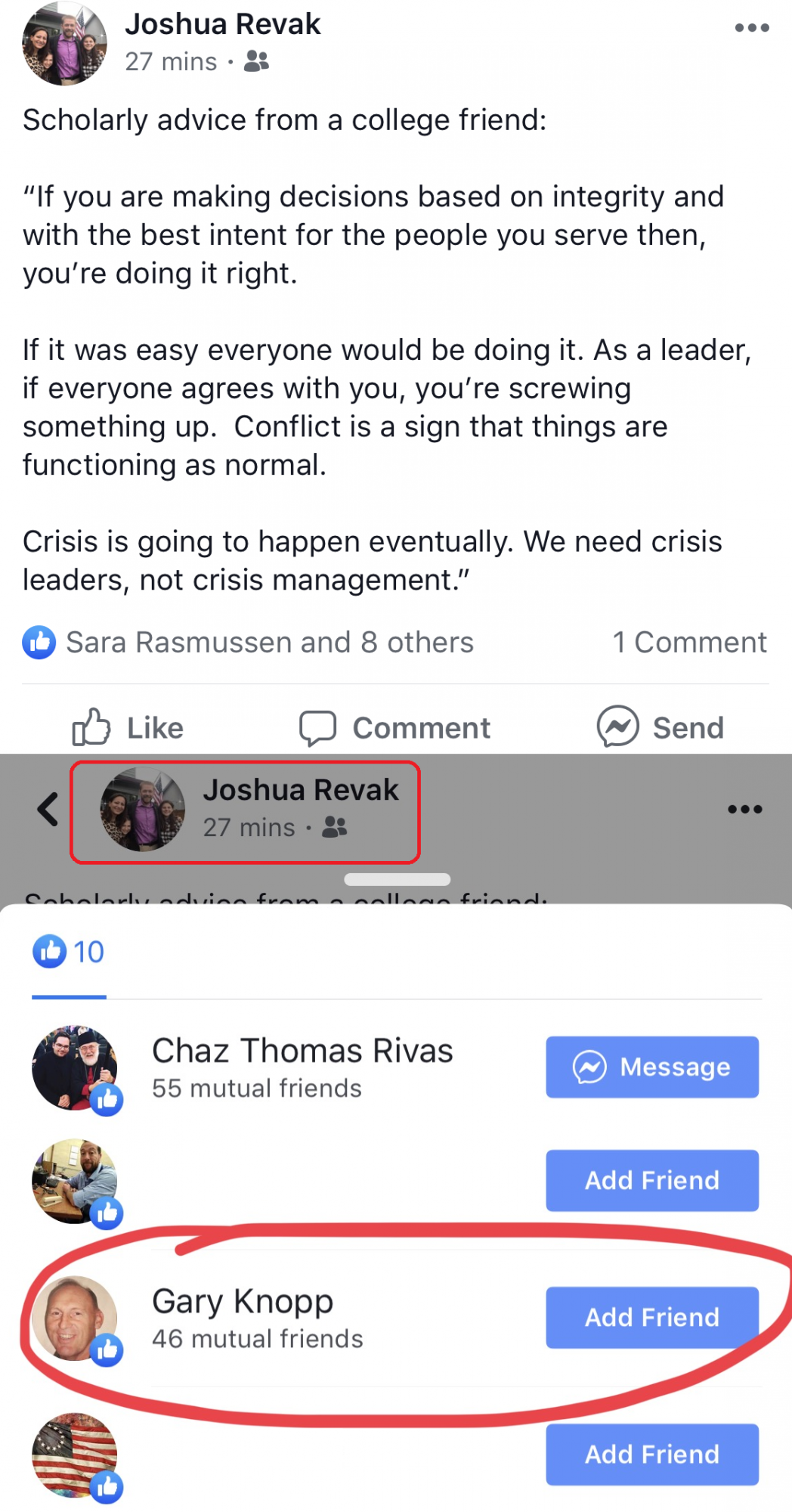 In other news, Democratic Presidential Candidate, Senator Elizabeth Warren, weighed in on the Governor’s budget cuts and how they may negatively impact Anchorage. Anchorage Mayor Ethan Berkowitz recently declared a civil emergency in response to the cuts. 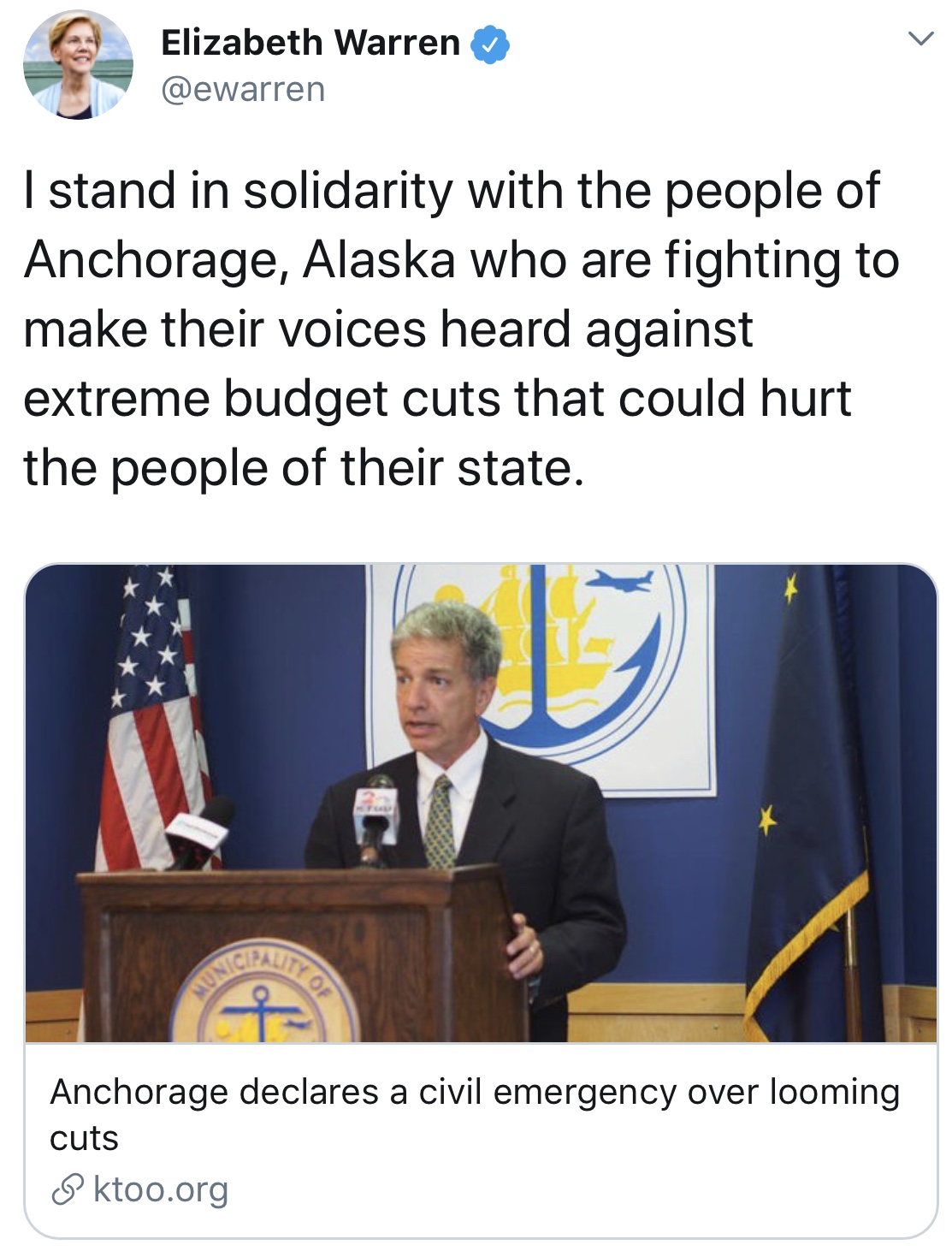 But the real crisis was Municipal Clerk, Barbara Jones, forgetting to BCC everyone when she sent out a media advisory on the extended declaration. OMG. 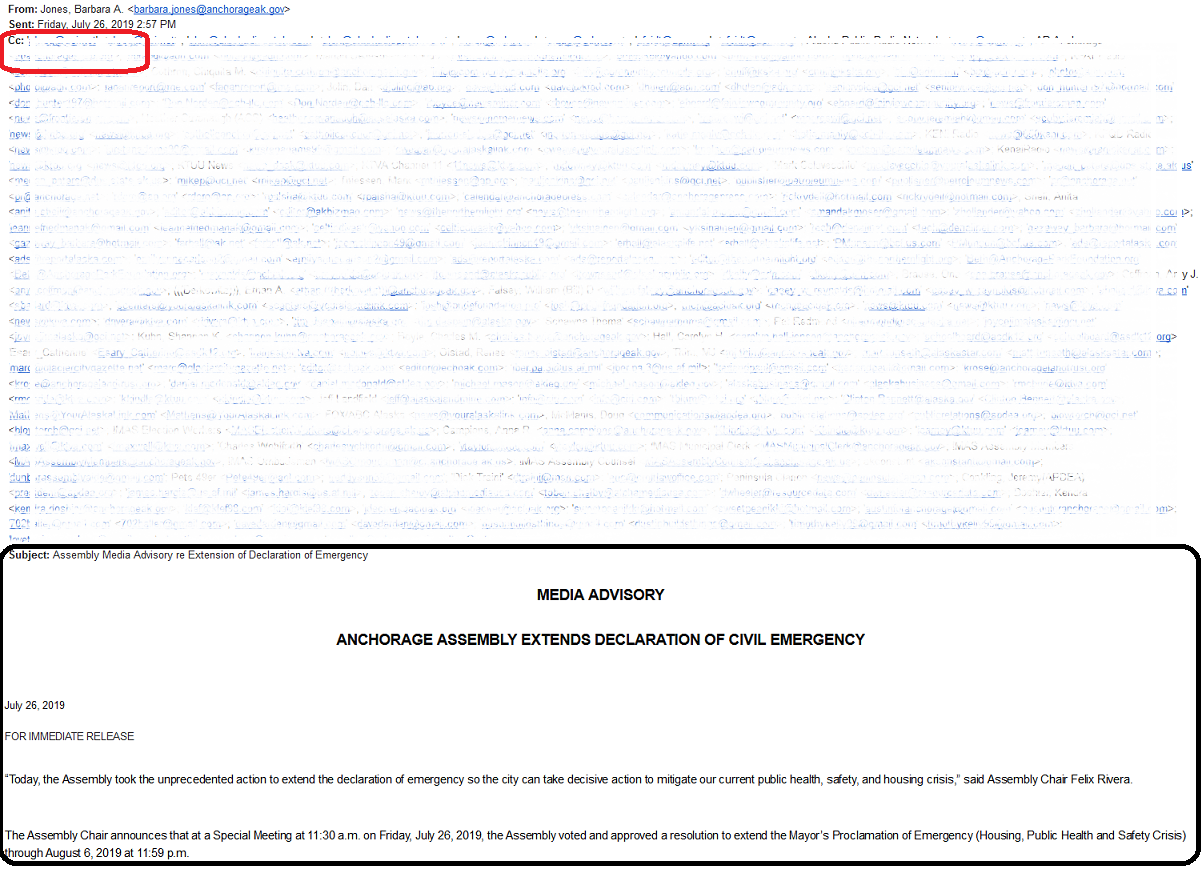 We are sad to report Assemblymember Forrest Dunbar’s fresh new bearded look isn’t long for this world. Hey Forrest, do you know about the guy on Fleet Street? I’ve never heard anyone complain. ? 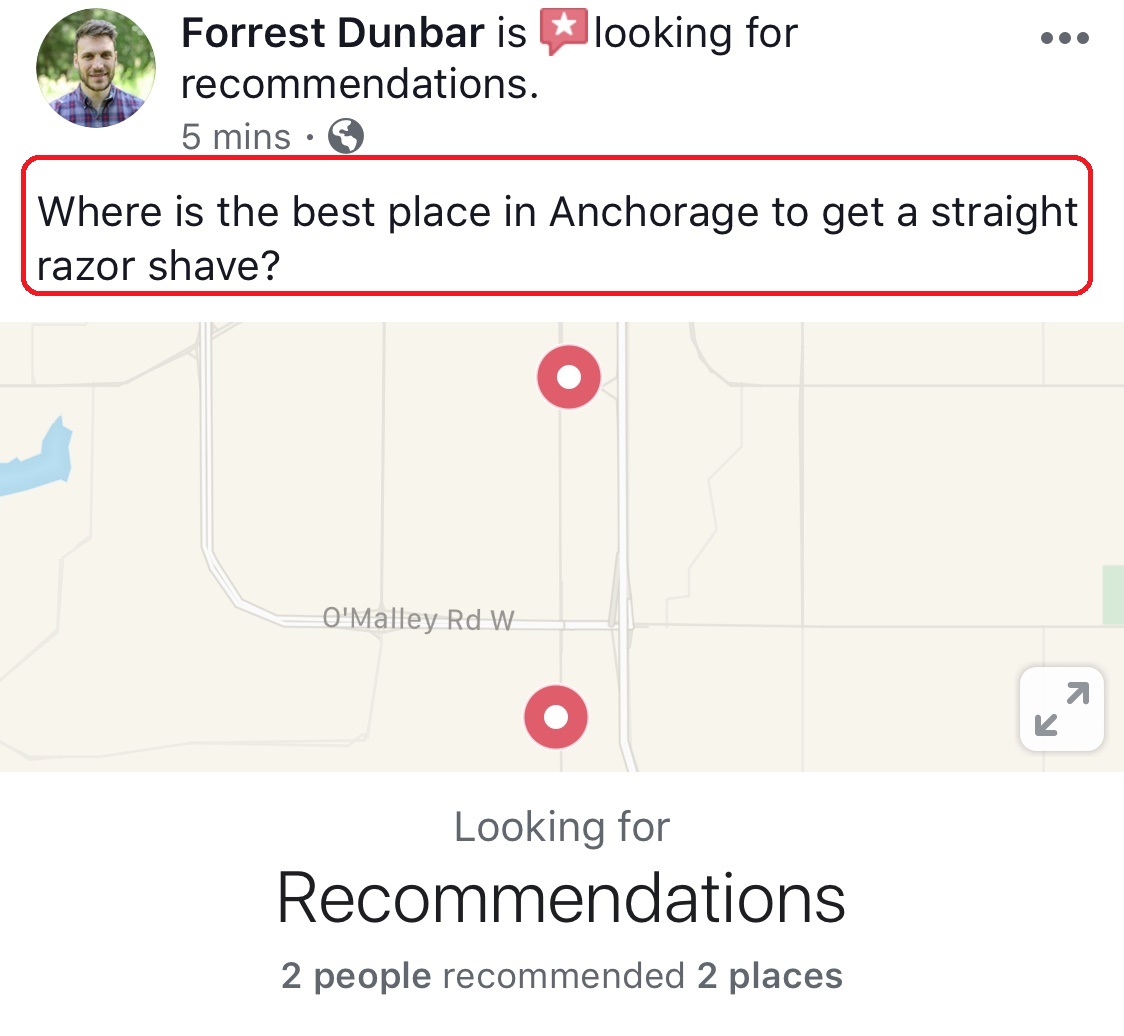 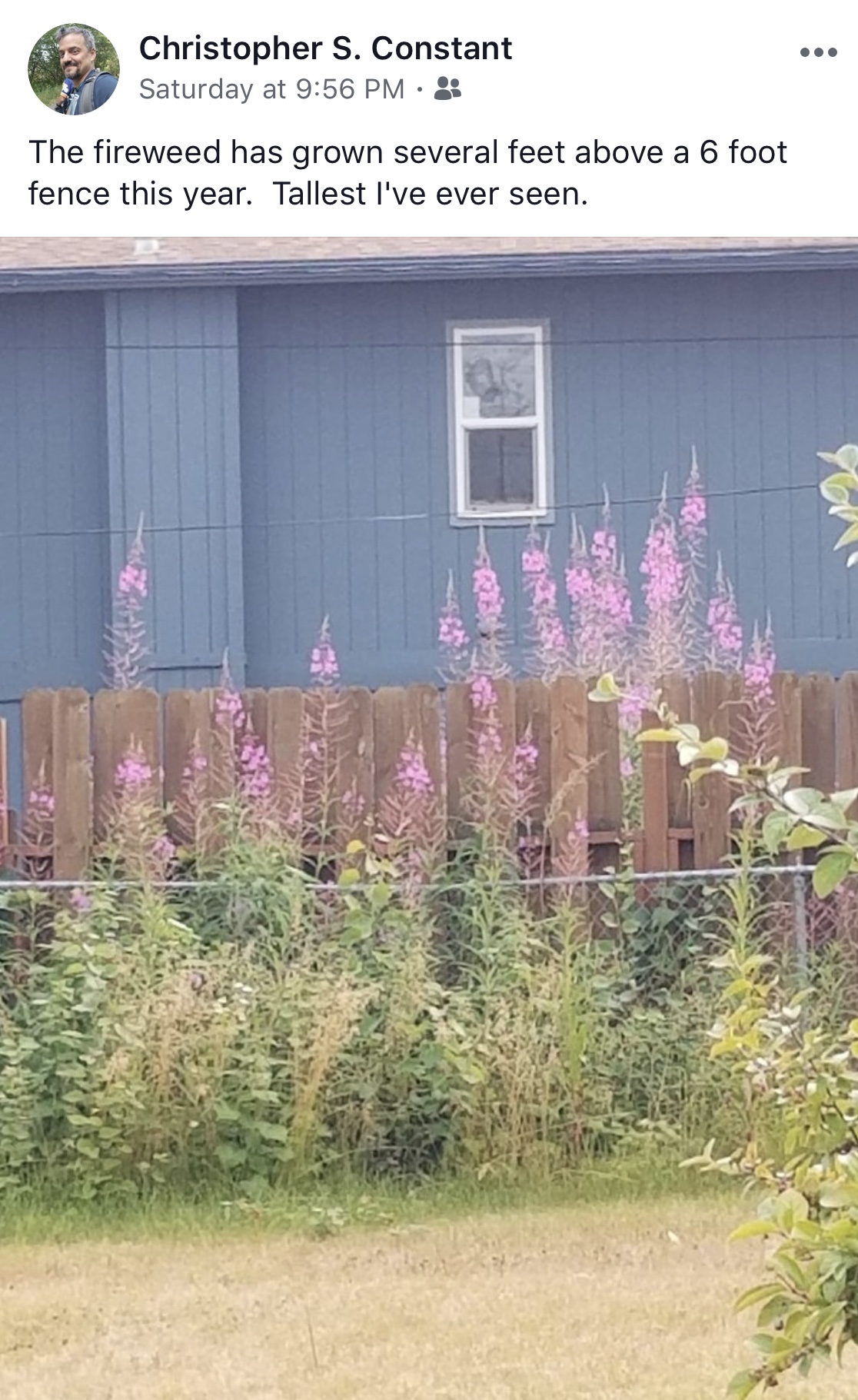 Overheard in Anchorage: “Facebook keeps suggesting I be friends with Donna Arudin and Kelly Tshibaka. No thanks.”

Overheard on Gavel to Gavel: Senator Burt Stedman with the “Bert Burn:” “Oh, it’s Senator Shower. Didn’t recognize you – haven’t seen you in a while.”

Overheard in Anchorage: “What is it with people who’ve left Alaska being the first to chime in about our politics? Looking at Mike Dingman, Kevin Baird, Dan Fagan, and now Casey Reynolds. It’s like… YOU left US. 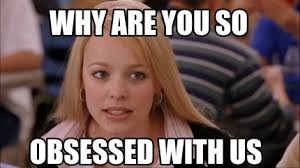 Spotted at the Tailwind bar in the Juneau airport on Monday night: Reps Fields, Johnston, Kopp, LeBon, Rasmussen, and Tuck.

Spotted at Steam Dot in the Midtown Mall: Senator Bill Wielechowski stopping by the table of former Rep. Jason Grenn and AOGA’s Brooke Ivy. Brooke used to work for both of them.

Once again you demonstrate your lack of understanding of Alaska politics. Tuckerman wants you to think he was fired and you’re falling for it. You do realize that campaign season is around the corner and Tuckerman is the GOP’s self-appointed MVP? With the recall effort around the corner and with so many disobedient Republicans to replace in the primary, you can bet Mikey D had zero problem with giving Tuckerman time to do what he loves most: campaigning. Allison, I don’t know why the ADN picked you up, but you need to earn some knowledge rather than speculate and talk… Read more »