So it is written, so it shall be. Breakup is here! Yes, things in Anchorage are finally starting to heat up. The last day to mail in or drop off municipal election ballots is Tuesday. And, while there’s still a couple feet of snow in my backyard, I’m at that stage where the sun feels warm enough to leave my coat at home and my cul-de-sac is turning into a small ocean. 😎 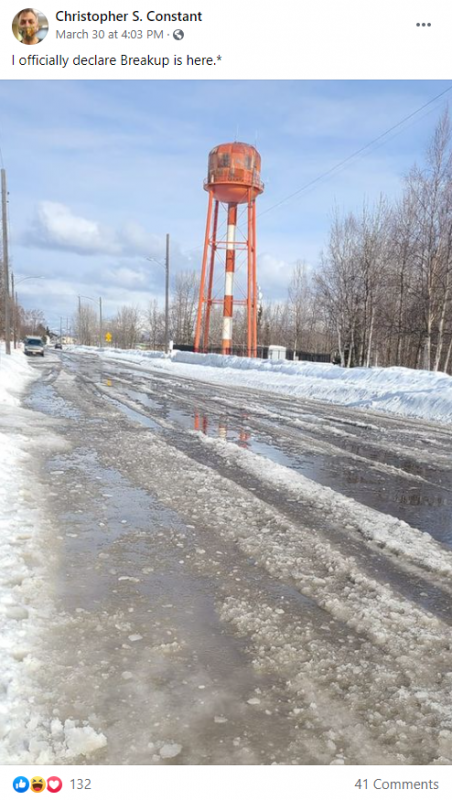 With the election just days away, we’ll be focusing on Anchorage stuff this week. Sorry, #akleg. Even if you don’t live in Anchorage I encourage you to join us on Tuesday for the infamous Alaska Landmine “Election Central” on Facebook Live. 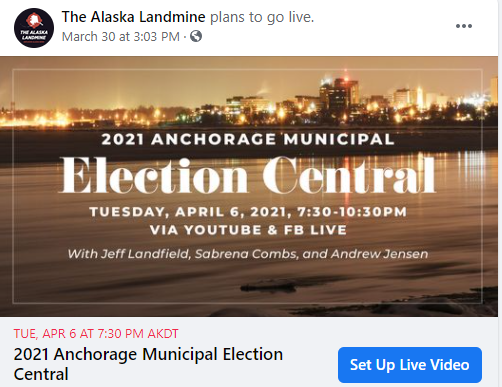 Not sure Acting Mayor Austin Quinn-Davidson picked the best week to cheer on “Bronson.” 🤣🤣🤣 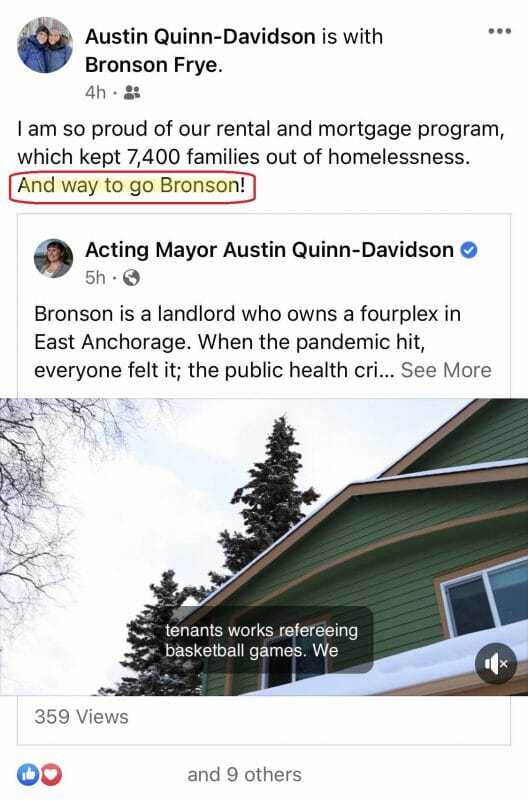 The Anchorage mayoral election is in its last days (before the almost inevitable runoff) and candidates have launched their final video ads. The Stalker went through everything so you don’t have to. First up we have Bill Falsey. As always, the production is top notch. But the content had me raising some eyebrows. Bill, couldn’t you have found another street in Anchorage? You’re literally following in Forrest’s footsteps. 🤦‍♀️ 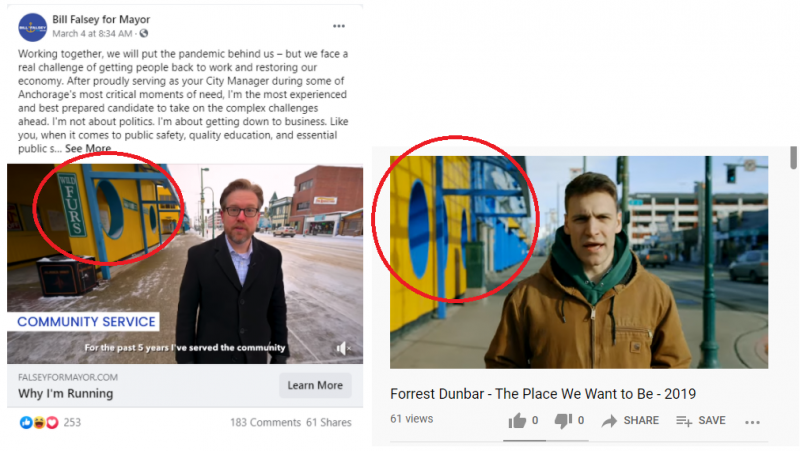 I do love that Landmine b-roll tho… 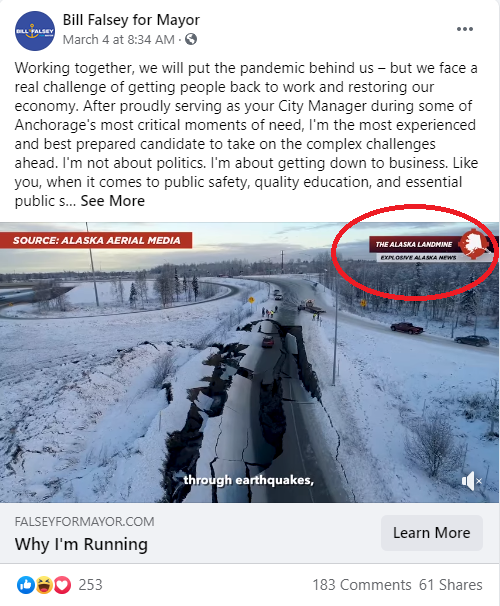 In the last Stalker column we had a passionate overhead from an Anchorage mother:

Overheard at an Anchorage toddler play date: “I just can’t relate to Dunbar compared to the other candidates. He’s never been married, doesn’t have any kids. He can’t even tie his shoes for an interview photo. Do we even know if his cat is still alive?”

Happy to report Forrest has answered this mom’s question. In the beginning of Dunbar’s newest campaign commercial we see him lovingly pet his cat, Katalla. She is alive and well. I am honored to have played such an important roll in getting to the bottom of one of the most important political questions of our time. My influence knows no bounds. 😼 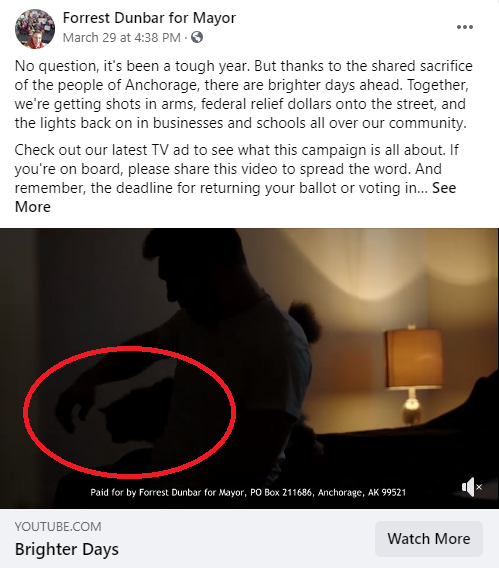 Imagine my surprise when, a few frames later, I saw friend of the Landmine and Palmer Deputy Mayor Sabrena Combs. Using a widely known Palmer resident in your campaign for Anchorage mayor? Sounds like something Dave Bronson would do! 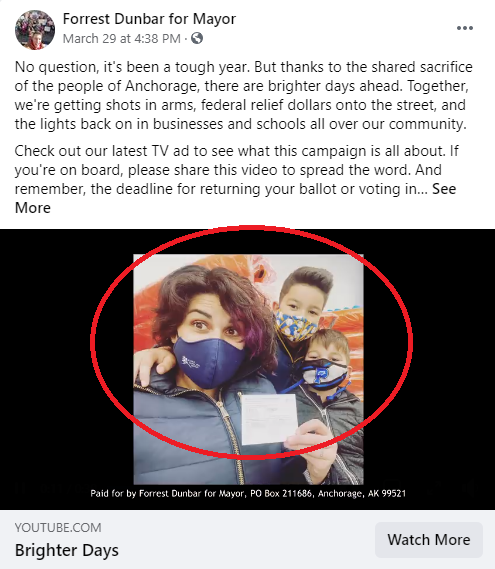 Speaking of Bronson, he seems to be channeling Dr. Al Gross. Check out Dave’s bizarre ad that brags “Bronson knows how to fix things because, after a grizzly bear ate his plane once, he duct-taped it up to fly home.” Can someone from the Bronson campaign please explain to me how “it rained the day Dave filed to run for mayor” made the Fun Fact Friday highlight reel while “a grizzly bear eating his plane” did not? I find this lack of judgement disturbing. Either way, duct tape can’t fix SAP. 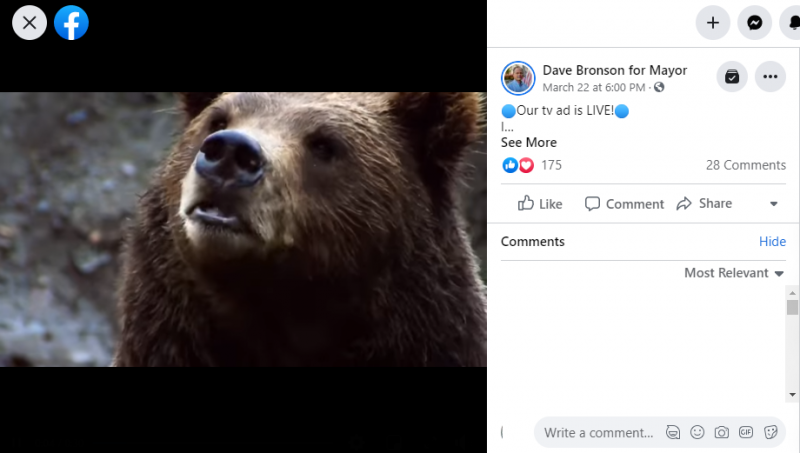 Then the commercial goes on to call the Anchorage Assembly a bunch of idiots, natch. Gosh, Dave. Crystal Kennedy is a really nice lady. Not sure you should be calling her an idiot. And Chris Constant isn’t even in the photo! 😬 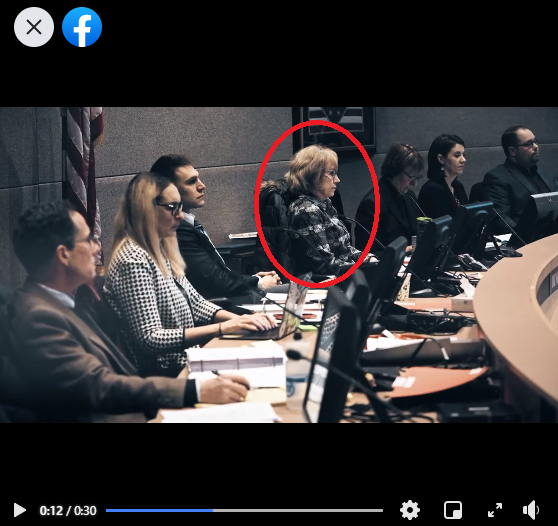 As a recovering local talk radio listener, I have to admit this got my hopes up a little. Are they back?! Will Anchorage’s airwaves be saved? Alas, it’s just a political ad for Bill Evans. 💔

“All day all week occupy all streets!”

This is my jam! Am I actually considering voting for George Martinez now? I’ll let George answer… 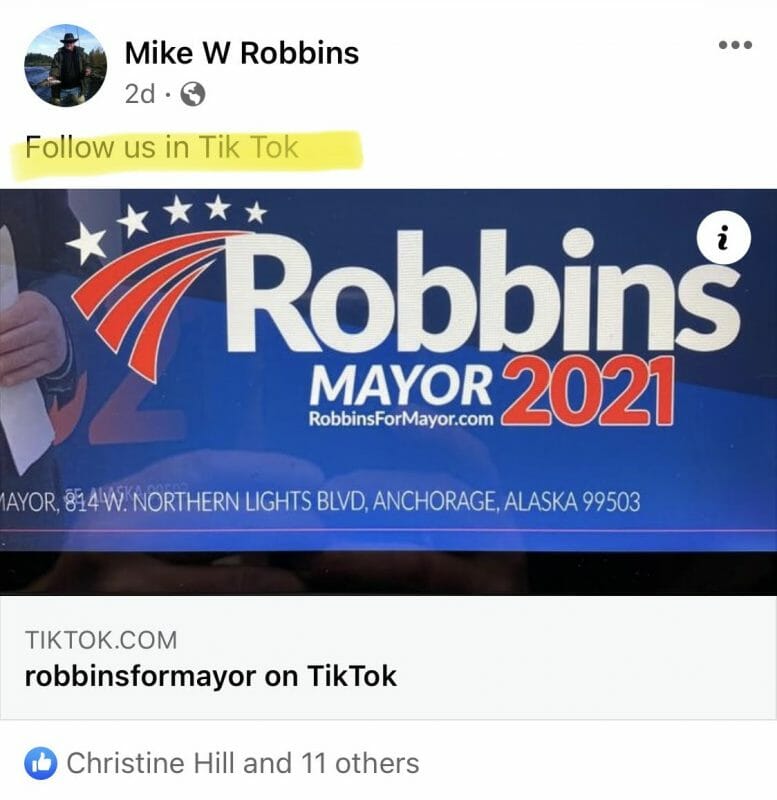 In other election news, it seems Felix spared no expense in designing ads to protect his seat. JK! Pretty sure that’s just Arial font over a picture saved in Microsoft Paint. 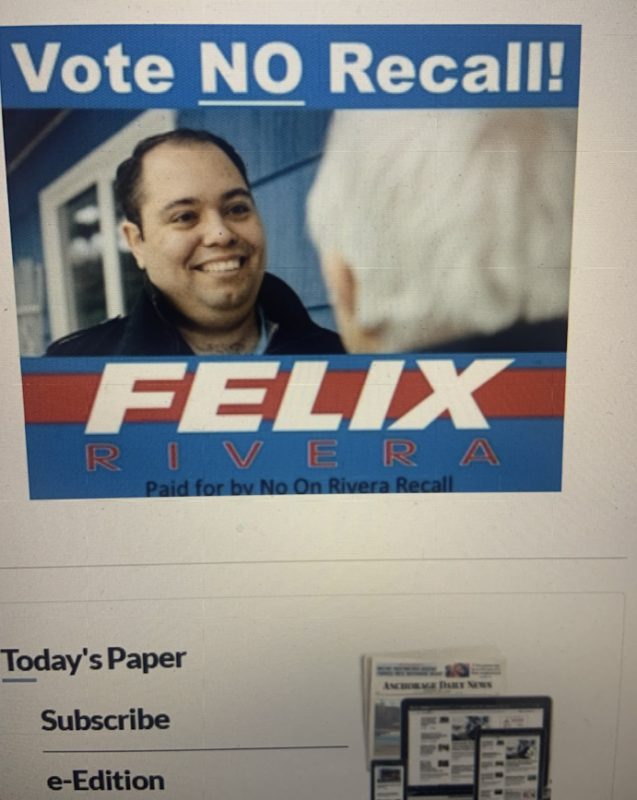 But seriously, if you live in Anchorage don’t forget the deadline to mail in or drop off your ballot is April 6th. Carrie with the 970 area code isn’t fooling around. 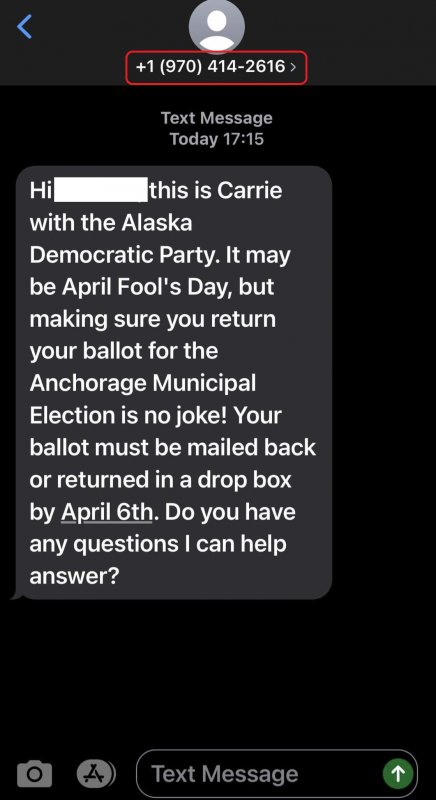 One of the biggest scandals to rock Alaska politics this week was the Stalker’s fav alt-weekly, The Anchorage Press, breaking that Must Read Alaska’s Suzanne Downing filed for a 2021 PFD while claiming permanent residence in Florida. Uh oh. 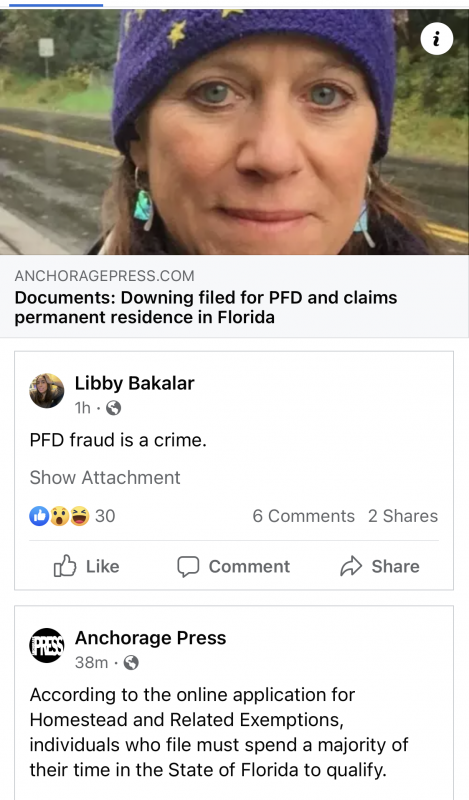 Whoopsies! That report ended up being Fake News with a capital F. And it wasn’t until Suzanne herself publicly fact checked them on Facebook that they deleted the article. 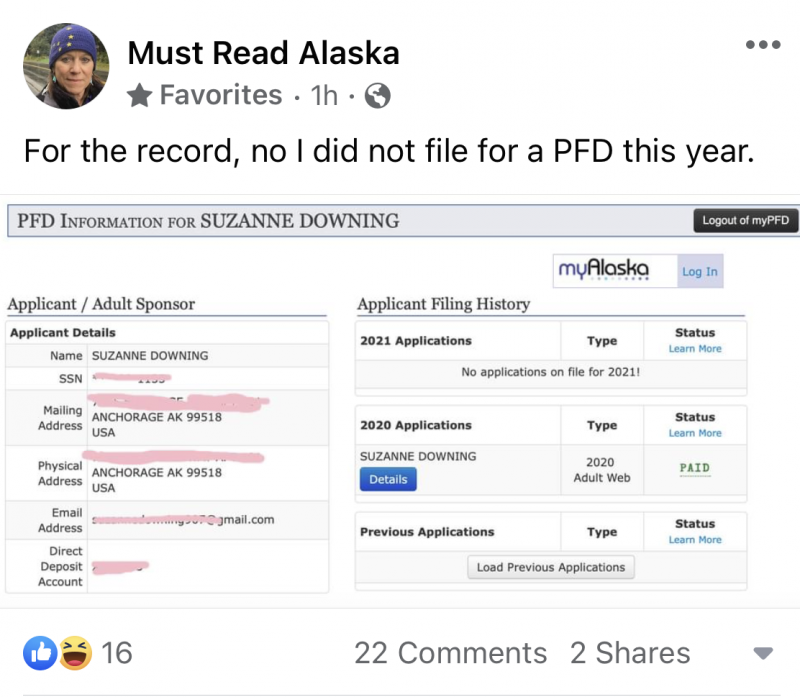 How utterly embarrassing. For those that care, the article (with a HUGE correction at the top) is back up. I mean, once I referred to Sen. Shelley Hughes as Rep. Shelley Hughes. I spelled Bryce Edgmon wrong a few weeks back and probably will again (I always want to add an “e”).  Another time I mixed up Scott Kawasaki and Scott Kendall’s Twitter. Oh, and once I posted a photo of Sen. Costello swimming and it was HER SON! 🙈🙈🙈 Yeah, okay that last one was pretty bad. But I have never falsely accused someone of a crime. I hope somepublication is doing some major reflecting this week.

I know a lot of people don’t care for Suzanne. But hey, I think she looks really good for her age. 🩱 Florida “suits” her. 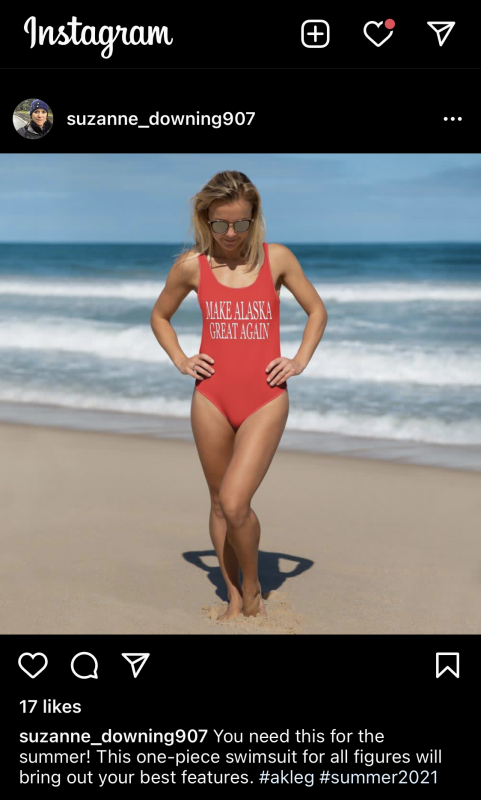 Well this is fun. Guess what Lt. Gov. Kevin Meyer decided to post on his personal Facebook page? Just a fun, totally not controversial at all, Facebook question and answer about vaccine passports. The comments do not disappoint – lobbyists, commissioners, former legislators, all weighed in. 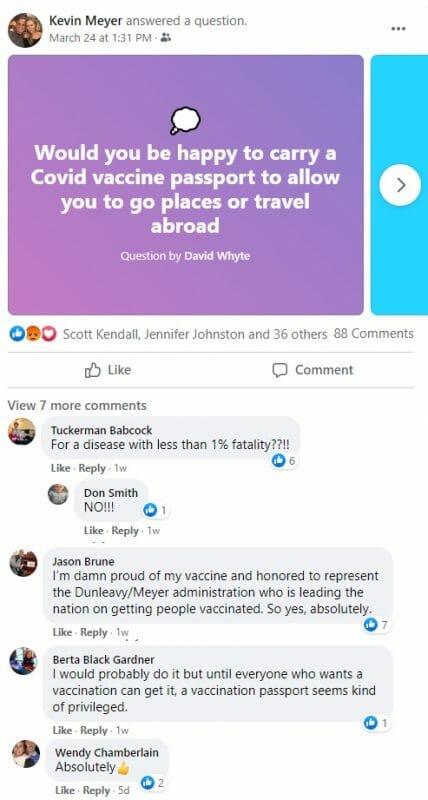 For the record, Kevin is PRO vaccine passport. 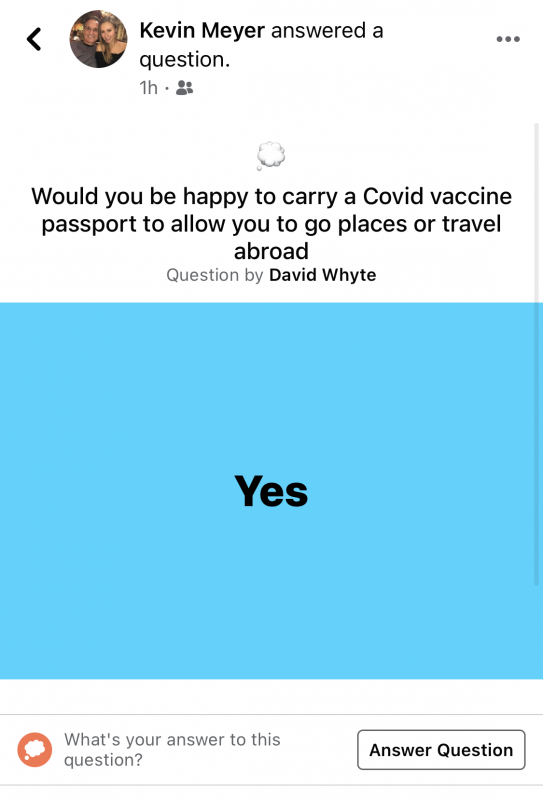 OMG did Rep. Vance have the inside scoop that Kelly Tshibaka was about to resign?! 👀😉🙃 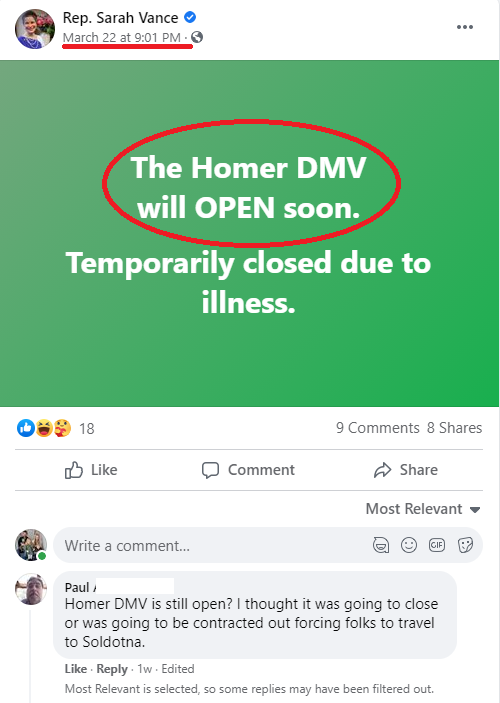 Yikes. Someone should probably have a talk with Sen. Kawasaki about the negative impact of ableist language. I trust Sen. Kawasaki will delete this tweet, avoid this harmful language in future hate-tweets, and issue a full apology immediately. 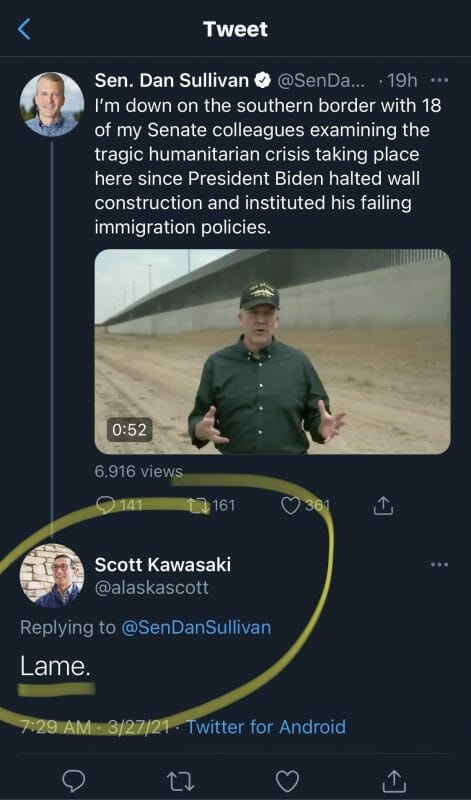 No, you don’t need to make an appointment with your eye doctor. It really was posted this way. Luckily someone deleted it from the Senator’s Facebook page quickly. We all know Nikki runs a tight shipwreck. 🥀 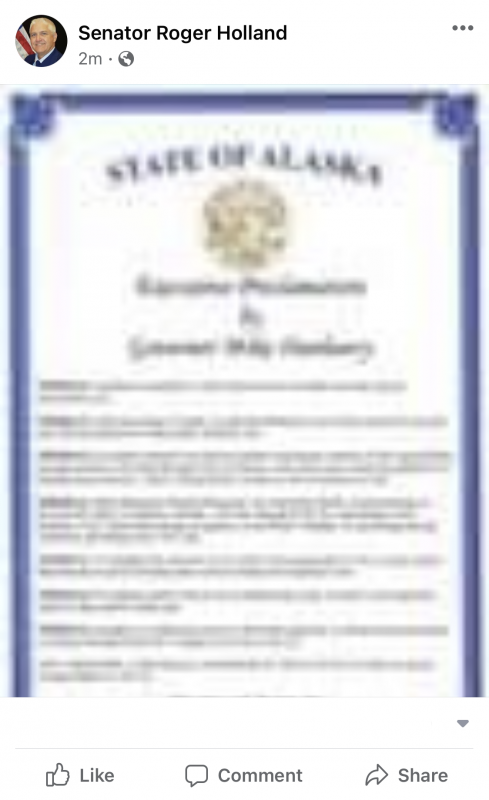 This is really weird and creepy. Please make it stop! Less Les! 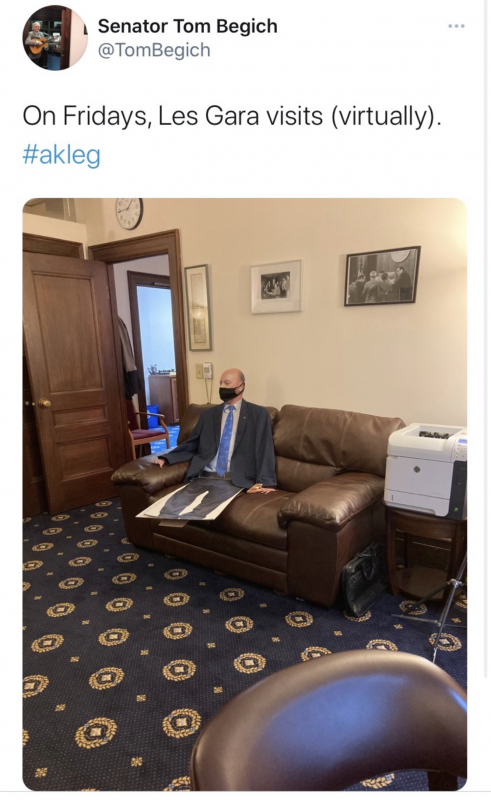 I’m just going to say it. The Sears Mall would have totally been okay with an anti-mask rally. The Midtown Mall is a little too bougie. 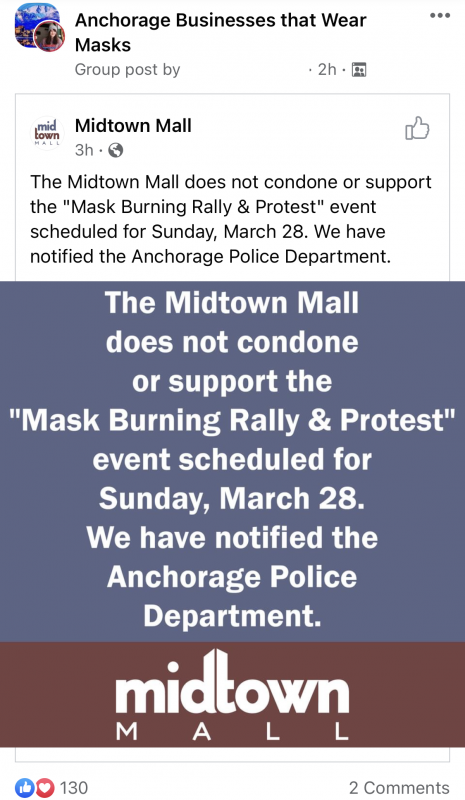 Spotted in Save Anchorage:

Now that we know the cat’s okay, someone needs to check on Pete. 🙀 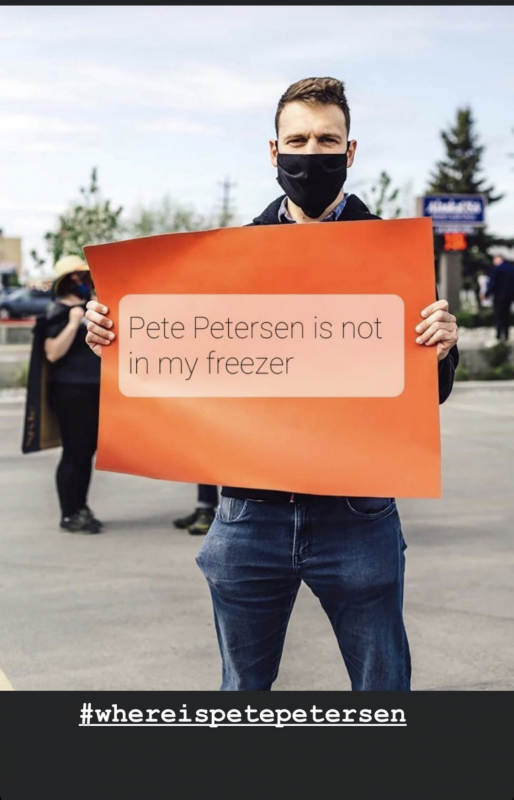 Overheard in Anchorage: Things I am f*&^ing tired of seeing in this campaign cycle: Paxson’s dog (v. cute but I could barely tell you which campaign he’s working for – seems like the dog could get more votes). And photos of Forrest Dunbar’s vandalized signs. Make it stop.

Overheard in Anchorage: “How funny would it be if Forrest just wins the whole thing outright? I mean, it’s 2021. Stranger things have happened.”

“It’s been 568 days since Nordstrom closed. Now that Halcro’s gone, can the new head of the Anchorage Community Development Authority get them to come back, please?”

“I was taking an early evening nap and I heard an aggressive “knock knock na knock knock. Knock knock” at the door. It was a Dave Bronson volunteer reminding me to mail in my ballot. I’m pretty conservative, but since she woke me up I’m definitely not voting for him.”

Overheard in Juneau: “When Kelly was chairing finance she was looking FINE – ance!”

“OMG a woman is testifying in committee for her appointment to the Alcohol Beverage Control Board and she got a call. Her ringtone was ‘Bad to the Bone.'”

Spotted in the The Last Blockbuster on Netflix: jockstrap obsessed Forrest Dunbar!

So glad 7400 people got thier rent paid.
Now my drug dealing neighbors can stay and destroy my sleep . These slumlords can keep renting their junk at inflated prices. This city is fucked.

I TOTALLY misread your last paragraph (I’m tired). I read it to say, “The Alaska Stalker was born and raised in Alaska. She bear lives in free South Anchorage with her husband and three or four kids not under Jeff Landfield.” I need coffee.