I hope everyone had a wonderful Thanksgiving. Now that the holiday weekend is at its end, I hope you enjoy this week’s Sunday Minefield.

The 4th special session has ended. Rather than gaveling out like the senate, the house just let the session expire. A source revealed that the senate led the house to believe they would not concur with Senate Bill (SB) 54, the bill that made changes to the unpopular SB 91. So, many in the house went home with plans to come back and concur after a conference committee. When the senate surprisingly concurred, few bothered to come back, and the house just ran technical sessions until the special session expired. Many in the house minority and the senate were mad the house did not just gavel out because it prevented everyone from fundraising. Expect a barrage of fundraisers now that those in the legislature can fundraise.

The legislature refused to deal with Governor Walker’s proposed payroll tax on Alaska workers. The relationship between Gov. Walker and the legislature seems to have completely deteriorated.

The final Great Alaska Shootout took place this weekend, ending a 40-year run. The UAA women’s team won. Remember when the state was flush with cash back in 2011 and the legislature proposed spending millions to fly people into Anchorage to watch? My how times have changed. 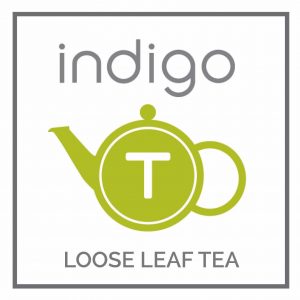 Longtime aide to Senator Kevin Meyer (R – Anchorage), Suzanne Cunningham, has taken a job in D.C. with the Senate Energy and Natural Resources Committee. Congrats on the new job. It is a big loss to Meyer as she has been with him for years. I bet his lieutenant governor opponents, former Representative Lynn Gattis and Senator Gary Stephens (R – Kodiak) are happier than anyone.

Chief of Staff to Representative Dan Ortiz (I – Ketchikan), Elizabeth Seliotes Bolling, has accepted the job of Assistant Legislative Director for Gov. Walker. Congrats to her as well. It could end up being a short term gig if Walker is not re-elected next year. However, word is she is a great staffer, and good staffers are always in high demand.

Rick Whitbeck resigned as vice-chair of the Alaska Republican Party to start a political consulting firm, the Pinnacle Group. Their website says, “WE’RE HERE TO ELEVATE CONSERVATIVE CANDIDATES AND CAUSES.” Whitbeck was elected vice-chair at the Alaska Republican Party convention in May 2016 in Fairbanks. Rick, if you need a high energy guy for some candidate promo, I’m your guy!

The Alaska Landmine obtained a copy of the deal signed on November 9, 2017. It is only 9 pages and half is in Chinese characters. So when you take out the cover and last page, and account for the Chinese characters, it is really like 3.5 pages. The names of the Chinese signers are also redacted. I’m not as excited as I was when the deal was announced. 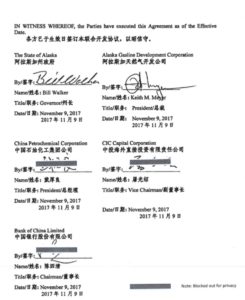 Representative Justin Parish (D – Juneau) is new to the legislature. He is known for his red beard and quirky demeanor. Well, someone in Southeast seems to like it… 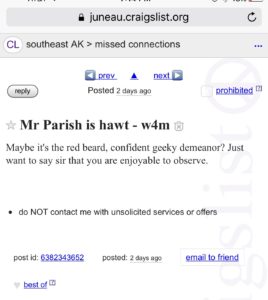 Also, was Parish a South American “farmer” before he was elected? 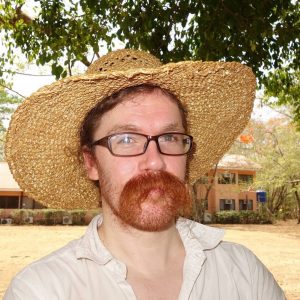 Did you know Representative Lance Pruitt (R – Anchorage) used to be in a boy band? Me neither, until I received this pic. Damn Lance, those frosted tips tho! 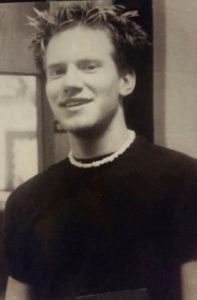 A loyal Landmine reader sent me this passage describing the recent resignation of Robert Mugabe, Zimbabwe’s leader for nearly four decades. He imagined it was about Bill Walker and not Mugabe. Sorry buddy, keep dreaming.

The capital erupted in celebration, with crowds pouring into the streets, dancing atop military vehicles and singing late into the night. Many people cried tears of joy as news of Mugabe’s resignation spread.

There are now 3 Republicans who have filed to run against Representative Jason Grenn (I – Anchorage). Former Representative Liz Vazquez (who Grenn beat last year), Sara Rasmussen (granddaughter of everyone’s favorite conservative Don Smith), and Hugh Hestand (who has not run for office before). Per usual, the Republicans will spend a lot of effort going after each other. This will give Grenn some breathing room until after the primary. The real question is – will a Democrat file to run or will Grenn face just the winner of the Republican primary? If a Democrat does file, Grenn will have a rough path to victory.

Word is Senator Anna MacKinnon (R – Eagle River) has been asking people if they would join her team if she were to run for governor. Why not Anna, everyone else seems to be. If she runs for governor, we could likely end up with Senator Lora Reinbold.

Sources are saying Bob Gillam is likely going to file to run for governor too. Between all that money and his name ID, it must surely make the others nervous. This race is going to be so entertaining! The Landmine will be sure to provide the updates you won’t get anywhere else.

At a meeting of the Valley Republicans Women’s Club, Representative George Rauscher (R – Sutton) told the group that he and Representative David Eastman (R –Wasilla) decided only one of them will run for state senate if Senator Mike Dunleavy (R – Wasilla) does not seek re-election. Who will it be? Damn, Senators Eastman and Reinbold, that would be something.

Speaking of David Eastman, check out this pic of him from his Boy Scout days. Is there a merit badge for getting elected to the legislature? 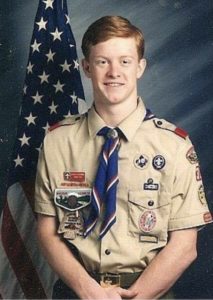 A rumor has been going around that the Alaska Republican Party is considering changing how they determine candidates. Instead of a state run primary, nomination by convention could be another method in determining candidates. Nothing prohibits the ARP from deciding this if a majority of delegates vote for it.

This is not unheard of and in fact, it nearly happened in Alaska at the 1996 Alaska Republican Party convention. The likely reason is the party wants to get rid of Republicans who joined the House Majority: Representatives Gabrielle LeDoux (R – Anchorage), Louise Stutes (R – Kodiak), and Paul Seaton (R – Homer). But it’s all or nothing, they just can’t do it for certain races. Imagine if this really goes down – talk about a high energy and entertaining convention next March in Anchorage!

Hey Jeff, The gasoline document signed by Governor Walker and some Chinese officials shows that the signatures of the Chinese officials have been redacted BUT not their respective names! You can read the names of the people just under where they signed …

Really enjoying the Landmine – thanks! It will be a fun read during the upcoming session and election year. I’ll send along a few private tips for sure.

Awesome! Thanks for reading.