Well, it has been a very busy week in Anchorage. When I started the Sunday Minefield (way back in October) my biggest concern was not having enough content. Actually, it is trying to decide what to include and what to leave out. The characters in the drama that is Alaska politics never disappoint.

The Resource Development Council (RDC) held their 38th annual Alaska Resources Conference in Anchorage at the Dena’ina Center on Wednesday and Thursday (11/15 & 11/16). Like the Alaska Miners Association Fall Convention two weeks ago, the mood was much more positive compared to the last few years. Between good news from D.C. on ANWR lease sales, a big upcoming exploration season on the North Slope, and cautious optimism about the recently announced gas line deal with China, many are optimistic that our best times are ahead of us rather than behind.

Governor Walker addressed a packed conference early Wednesday morning. When he asked for questions Representative Dan Saddler (R – Eagle River) stood up in the middle of the room and yelled about specifics of the gas line deal. It was pure political grandstanding and Walker gave a brief and generic answer. No one else asked a question.

Someone thought it was a good idea to book Daniel Simmons for the Thursday keynote lunch talk. This dude’s actual title is, Principal Deputy Assistant Secretary in the Office of Energy Efficiency and Renewable Energy (EERE). Efficiency does not belong in that title. Simmons talk was, well, interesting. The adage ‘know your audience’ leaps to mind. He remarked that low energy prices are great because they contribute to American energy dominance. Telling the RDC folks that low oil prices are a good thing…bad idea. It gets better (or worse, depending on your perspective). After he wrapped up and the moderator was back on the mic, Simmons said, “Wait I forgot something!” went back to the mic and spoke for a few more minutes. Whoa. Everyone seemed a bit flabbergasted. Pretty sure he won’t be invited back next year.

Nearly all the Alaska state legislators were spotted at the conference. They should have just held the 4th special session there. It certainly would have been cheaper to just hold it at the Dena’ina Center.

Remember VECO? In case you are new to Alaska, VECO was a large oilfield services company owned by a guy named Bill Allen. Allen donated a lot of money and favors to many legislators and became known as a king maker of sorts. He liked some of them so much he was caught on tape giving them cash. The FBI did not find it amusing and in 2006 they raided the offices of several legislators. The result was lots of people went down and Allen was forced to sell VECO. But many years before all of that, guess which legislator worked there? I was blown away to find out that Representative Harriet Drummond (D – Anchorage) worked at VECO from 1979-1981.

Morning KENI conservative radio talk show host Rick Rydell had an interesting Wednesday morning. During a call, the feed got disrupted leaving just the caller and no Rick. After talking for a while with no response from Rick, the caller (who apparently didn’t know he was still live on the air) yelled, “Did you hang up on me you fuck!” I don’t think he’ll be allowed back on the phone with Rick for a while. At least he is sorry. 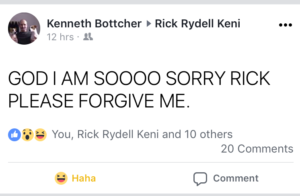 While I poke fun at many of the legislators, I appreciate the ones who don’t act like babies about it. I ran into Representative Lora Reinbold (R – Eagle River) at the RDC conference and we laughed about the Rick Rydell caller. Turns out, Lora called in after him (and did not drop an f-bomb). She was very pleasant with me, as she always is when I see her. We had a good laugh. Landmine avoided!

Representative David Eastman (R – Wasilla) is sticking by Alabama Republican candidate for U.S. Senate Roy Moore. Moore has been plagued by accusations that he dated underage girls in the 1970s when he was an assistant district attorney. When asked if he still endorses Moore, Eastman replied, “Absolutely.” Click here to read the article.

The Alaska Municipal League held its 67th Annual Local Government Conference this week in Anchorage at the Captain Cook Hotel. Governor Walker addressed them on Wednesday followed by Lieutenant Governor Byron Mallott on Thursday. During Gov. Walker’s lunch speech, several legislators rolled in and enjoyed a meal without registering for the conference. I guess there is such thing as a free lunch.

Gov. Walker was in D.C. earlier in the week. Word is he met with Senator Angus King (I – Maine). King was governor of Maine from 1995-2003, and, like Walker, is an Independent. King sits on the Senate Energy and Natural Resources Committee. Maybe Walker was trying to leverage their similarities into support for drilling in ANWR. Not holding my breath though, King seems quite opposed to it.

Speaking of D.C., word is Alaska GOP-sponsored activist blogger Suzanne Downing and Republican gubernatorial candidate Scott Hawkins were both there this week. Were they there together? I wonder if they caught up with Bill Walker? Inquiring landminers want to know!

The Anchorage Republican Women’s Club held some kind of bizarre fur fashion show event at The Center. Several Republicans donned fur jackets and awkwardly strutted down a catwalk. Senator Kevin Meyer (R – Anchorage) and Representative Dan Saddler (R – Eagle River) somehow agreed to participate. So that’s how you get support from conservative Christian ladies? They should stick to politics.

The ADN reported that long-time Legislative Affairs Director Pam Varni is retiring in February. This came as a shock to many legislators. Varni has been in that position for a long time and is one of the most powerful people in the legislature. Imagine all the dirt she has on everyone. Pam, please feel free to get in touch with the Alaska Landmine with any and all of the good stuff!

The Alaska Dispatch News is going back to its roots and is named the Anchorage Daily News again. At least they don’t have to change their web address. Owner Ryan Binkley spoke about the acquisition and future of the ADN on Wednesday at the RDC conference. He mentioned there may be a name change but did not say what or when. Not long after his remarks, the name was changed on Facebook. Ryan, you should have announced it at the RDC conference buddy. I introduced myself to Ryan afterwards. He is a genuinely nice guy. And he even mentioned The Alaska Landmine!

Representative Chris Birch (R – Anchorage) is running for the open seat Senator Kevin Meyer (R – Anchorage) is vacating to run for lieutenant governor. This is a solid Republican district and two Republicans have already filed. Joe Riggs and Albert Fogle, both former Anchorage Assembly candidates. Each held fundraisers this week at Little Italy in South Anchorage. Riggs on Monday and Fogle on Wednesday. Both events were well attended by their friends and active Republicans. Fogle’s event attracted more people.

The real winner, Little Italy. This will prove to be an interesting race as both candidates are well liked and have support from mainstream Republicans.

There seems to be nothing that will keep Republicans from supporting tax increases and reductions in Medicare and Social security or supporting a pedophile for election to the US Senate. They are a strange tribe.