The Alaska Senate voted 11-9 on Friday to concur with the Alaska House’s changes to Senate Bill (SB) 54, the crime reform bill. Word is the Governor Walker wasn’t too happy about the concurrence due to some potential issues about constitutionality even though that’s exactly what he asked the senate to do if not two days earlier. Whoops.

A last minute amendment was passed on the house floor that was later determined to likely be unconstitutional. The senate decided to roll the dice instead of going to conference committee and fixing the amendment. Then, in an unexpected move, the senate gaveled out. They probably all want to get as far away from Senator David Wilson (R – Wasilla) as possible.

Wilson has found himself in the middle of a real mess. Denying he harassed a female staffer, only to have not one, but two reporters who witnessed the event point out his discrepancies about what really happened. Senate leadership also thought it was a good idea to cover it up by not dealing with him back in June when it was brought to the attention of Legislative Council. You know, the meeting when they decided it was a good idea to suppress the release of the tape but ensure he would be dealt with only to do nothing about it. Slapping reporters and harassing women: no problem as long as you are on our team.

Not surprisingly, Alaska GOP-sponsored activist blogger Suzanne Downing wrote a piece defending Wilson. She even defended his slap to the face of reporter Nat Herz, saying Wilson “once playfully slapped a reporter who got on his nerves.” Soon after the piece went up, the Must Read Alaska website crashed. Maybe the Alaska GOP forgot to pay their website hosting bill.

Before their IT difficulties, Must Read Alaska had been running ads for only one Republican gubernatorial candidate, Scott Hawkins. Does GOP mouthpiece and activist blogger Suzanne Downing really like old Scott or is the Alaska GOP backing him over his Republican rivals? Her heart is with Bill Walker, but she has other marching orders. Downing said in the blog post that Senator Wilson is considering legal action. Soon after, former candidate for state house Anand Dubey threatened a defamation lawsuit against me on Facebook. Dubey provides political services to Senator Wilson. Hey, gotta hang onto those clients I guess – whatever the cost. He has since deleted the comments and blocked me. To Dubey and Senator Wilson – please sue me. I look forward to the tape coming out and deposing Senator Wilson. Talk about a #highenergy deposition! 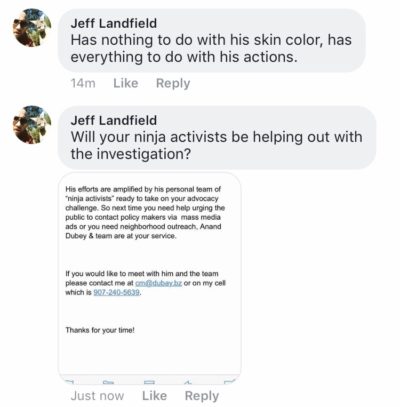 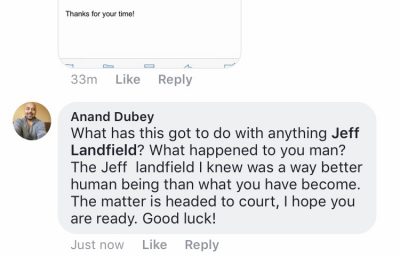 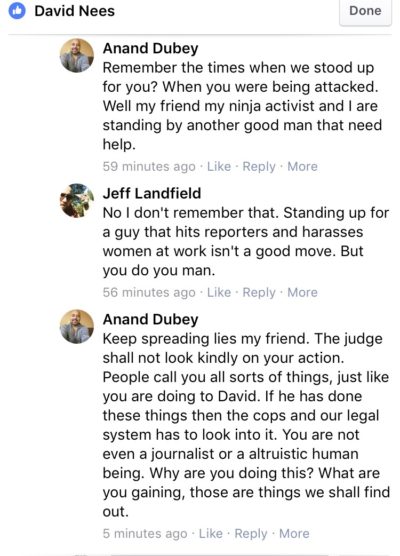 Most people know that during a legislative session the legislators cannot fundraise. But did you know that the governor and lieutenant governor can? Maybe that’s why Governor Walker keeps calling them back. Representative Mike Chenault (R – Nikiski) is running for governor and Senator Kevin Meyer (R- Anchorage) is running for lieutenant governor, and nearly all of them face re-election next year. No wonder they want to get the hell out of Juneau.

I think we all heard about the Chinese gas line deal that Governor Walker announced this week. While it is right to be skeptical, some sources close to the deal have said this is the nearest we have ever been. If this in fact goes down, the legendary karaoke bar Asia Garden is about to be the most valuable business in Alaska. They may have to expand to deal with the impending demand for karaoke.

Mayoral candidate Rebecca Logan had a fundraiser at former assembly candidate Andy Cleary’s house on Wednesday. It was mostly friends and neighbors. Word is they all brought their checkbooks. She has another event scheduled this week at Mayor Dan’s bar, McGinley’s. She smartly scheduled it during the Resource Development Council conference, which will be taking place across the street in the Dena’ina Center.

Word is it that the Alaska Republican Party is considering endorsing Logan to keep others out. In fact, no other Republicans are even rumored to be running for mayor. Looks like they learned their lesson after the last mayoral election (what a memorable time that was). Amy Demboski managed to beat out Dan Coffey, Andrew Halcro, and many others in the first round, only to lose badly to Ethan Berkowitz in the runoff. At least we all learned accusing your opponent of supporting incest is a losing game plan.

Everyone’s favorite pro-life activist Jim Minnery is not supporting Logan because she does not support his bathroom initiative. This seems to be his new issue to raise money. He may try and find someone to run against her. I can’t wait to see who he finds.

What is Mayor Ethan Berkowitz up to? His campaign has not done much since he filed for re-election. I expect he will sit tight and focus on his job as mayor until after the New Year. I just hope he does not do another campaign ad like this. Go to 0:52, glad he was not hurt. Hard hat, buddy.

Speaking of fundraisers, former assemblywoman and now candidate for state senate Elvi Gray-Jackson held a fundraiser at Kinley’s on Thursday. It was a packed house, with many prominent Democrats and politicos in attendance. Among the throngs were Mark Begich, Assemblyman Forrest Dunbar, Assemblyman Felix Rivera, union AFL-CIO President Vince Beltrami, Joelle Hall, Alaska Democratic Party Executive Director Jay Parmley, man about town Elias Rojas, and many others. The best part was there was an actual jazz band playing. Now that’s a #highenergy fundraiser! I doubt any other Democrat enters that race.

The Department of Agriculture has directors in every state (that was news to me too). Recently the Trump administration chose a few for Alaska. Word is former state senator Bill Stoltze was telling people he had it all locked up. But some of his former colleagues had other ideas and another guy ended up getting picked. Bill’s probably not at all happy about that. But it sounds like a boring job anyways, Bill. #AlaskaGrown

The house floor debate on SB 54 proved to be very entertaining this week. Representative David Talerico’s (R – Healy) wife was a refreshing distraction from all the craziness. She was spotted sitting in the gallery for much of the long floor sessions knitting what seemed to be a hat. She appeared in the background of the TV coverage while Representative Lora Reinbold (R – Eagle River) was talking. I would have rather listened to her than Reinbold, but I’ll take the knitting. Mrs. Talerico, if you are reading this, can you please knit me a hat that says “The Alaska Landmine”? I’d be happy to pay for it.

The Alaska Miners Association (AMA) held their Fall Convention at the Dena’ina Center this week. Lots of folks attended and the mood was very positive. Past AMA president Jason Brune told me that the mining industry has been pessimistic over the last few years but the new (Trump) administration has people feeling more optimistic. Projects are now being allowed to go through the permitting process. Mining provides Alaska thousands of high salary jobs.

The Anchorage Young Republicans held their year-end fundraiser last night at the Anchorage Curling Club in Government Hill. This was my first time there; what a great spot for an event. In attendance were many young Republicans and some politicos, including gubernatorial candidate Scott Hawkins, Senator Mia Costello, and activist blogger Suzanne Downing – who did not say hi to me. Sad!

Shout out to Dr. Brian Sweeney, the president of the club, who taught me to curl. It wasn’t pretty at first but I caught on pretty quick. I am definitely going to join the club and start curling.