Following a disappointing revenue forecast and dismal fiscal outlook, the State of Alaska announced it has begun selling advertising space on Alaska ferries. The Alaska Marine Highway System has seen a year of deep cuts and reduction of service around Alaska. Department of Transportation Commissioner John MacKinnon issued the following statement regarding the new advertising program:

It’s no secret the Marine Highway System needs money. Ticket sales don’t cover operating costs, and Governor Dunleavy has made it clear that ferries are not a priority. After Commissioner Kelly Tshibaka asked Alaskans to donate to the DMV, I thought to myself, ‘John, if she can ask people to donate to the State, why the heck can’t we sell ferry ads to the highest bidder?’ These suckers have a ton of unused prime ad space on them. So far the feedback from advertisers has been overwhelmingly positive. 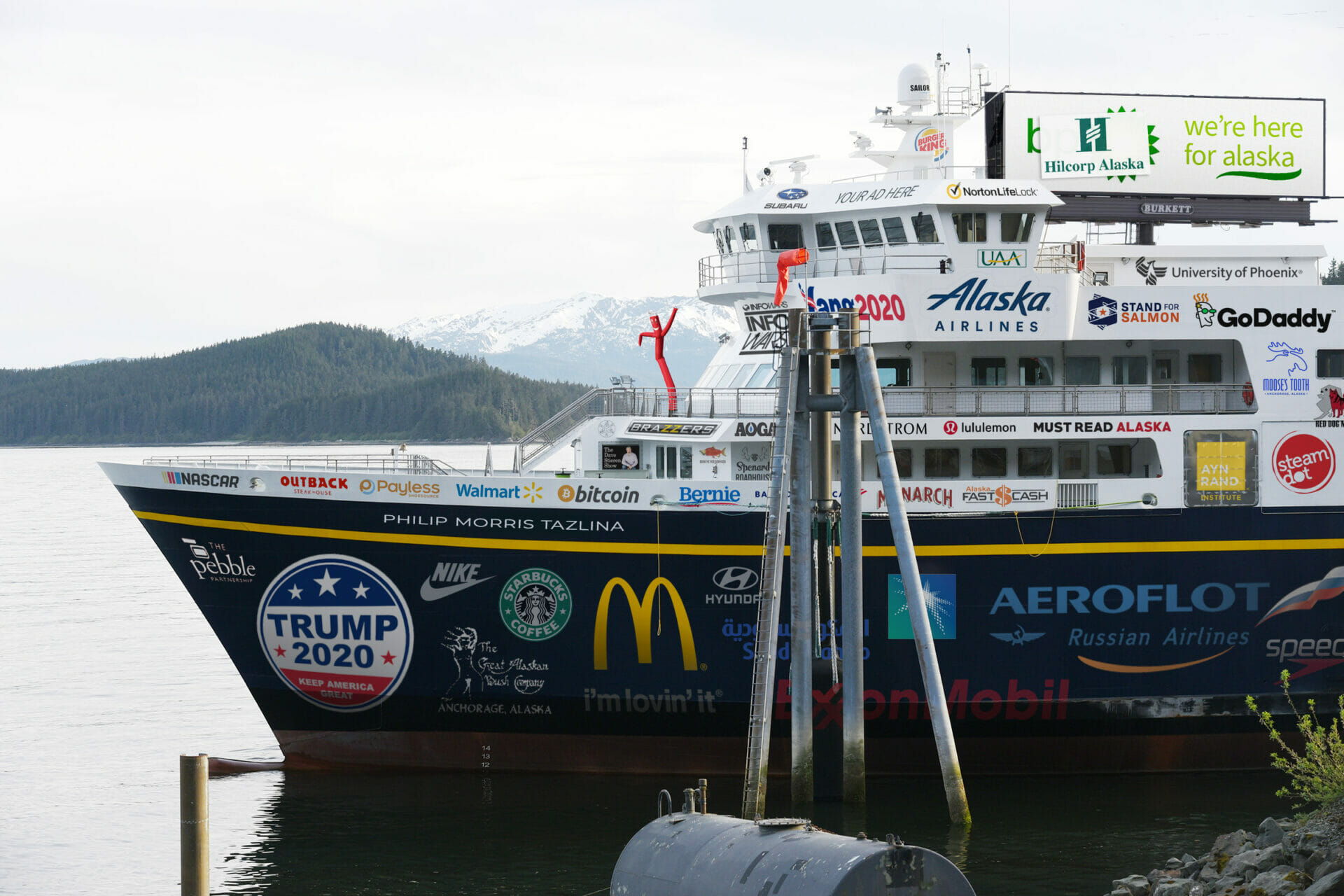 It’s not clear how much money the ads will generate. However, some have already questioned the move. A longtime Southeast resident told the Landmine, “You know I used to enjoy watching the ferries come in. They were so pretty! Now I have to see ads for Trump 2020 and the Bush Company. I guess our fiscal situation is worse than I thought. At this point I’m almost with Dunleavy on the ferries… maybe we should just sink the damn things.”

Representative Sara Rasmussen (R – Anchorage), a member of the House Transportation Committee, commented, “I’m all for the State making more money wherever we can. Times are tough. The new Starbucks advertising partnership should bring in new revenue while also ensuring that passengers like myself have access to halfway decent lattes.”

I’m so tired of hearing that ticket sales don’t cover operating cost. When the state puts toll booths on the Glenn Highway and it pays for itself then you can complain about operating costs.
I agree let the state make money if they can ( as long as the revenue goes to the AMHS and not the general fund) and Starbucks- I’m all for that.

I can’t believe any self-respecting Alaskan would ever like Starbucks. Ew.

Then you’re in for a shock, several Starbucks in Anchorage alone and they are always busy. Guess there aren’t many self-respecting Alaskans.