Every election cycle there is inevitably some kind of controversial issue. This is the nature of politics. In addition to the high profile and contentious governor’s race this year, there is also the Stand for Salmon ballot initiative. This is highly controversial. The initiative was initially denied by Lieutenant Governor Byron Mallott. So the group appealed it all the way to the Alaska Supreme Court. A decision has yet to be made. According to State Solicitor General Joanne Grace, a decision has to be make by September 5 for Division of Elections to be able to print ballots properly.

I received a tip that a few of the members of the Stand for Salmon coalition were not exactly willing members. One of them is 229 Parks and Tavern, which is owned by Laura Cole. She made it clear to me that she no longer wanted to be on their list and asked for her name to be removed. This is an email she sent to the Stand for Salmon people on June 25, 2018. 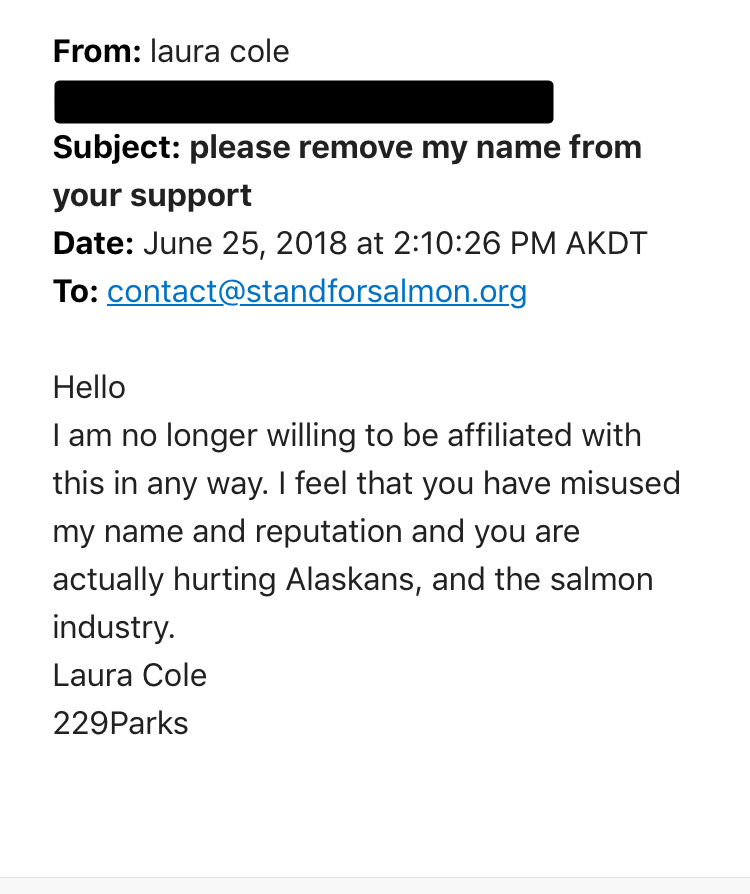 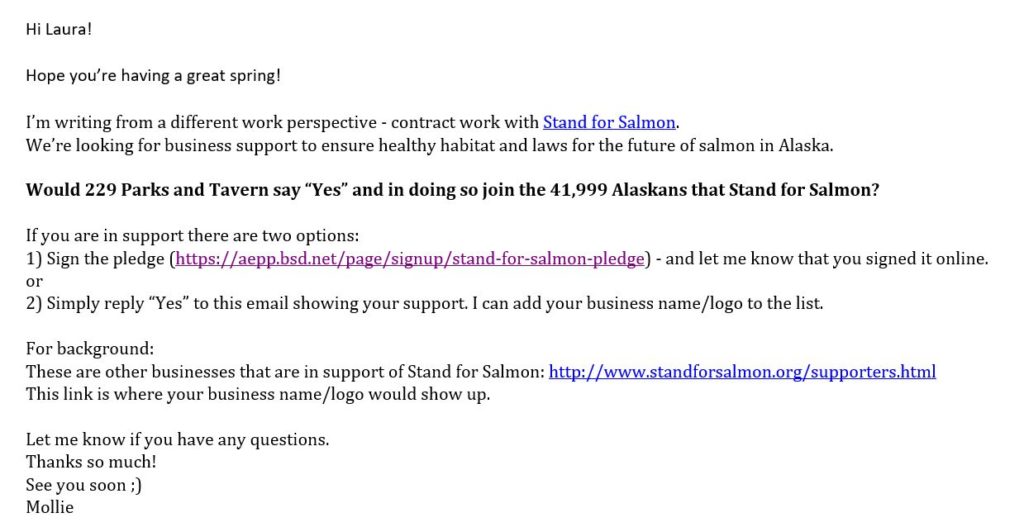 Ryan added, “I know these [Stand for Alaska] are your people. They are paying you a lot of money for their ads.” I told him they are not paying me that much for theirs ads and that most of my ad revenue goes back into the Landmine. I also added that I contacted him in April about selling him an ad and never heard back from him. I will sell an ad to almost anyone except hate groups. By the way, if you want to buy an ad, click here for more info. Very affordable!

I spoke to some other businesses in the Stand for Salmon coalition who asked not to be named. They told me they do not get involved in controversial political issues and were not aware of how controversial this issue is. Maybe the Stand for Salmon people are asking business owners, “Do you support salmon?” Here is a link to their pledge form. You decide if it provides enough explanation.

This is not the first time Stand for Salmon has deal with a departure. In November, Brian Kraft, who owns the Alaska Sportsman’s Lodge in Bristol Bay, withdrew his name from the initiative. The Landmine broke that story. You can read that article here:

Brian Kraft to Withdraw From Stand for Salmon Ballot Initiative

You would think with such a controversial initiative they would make damn sure everyone who is part of their coalition are fully informed about what they are signing up for.

When they came to my door, I said “Oh, you’re the anti Pebble folks” – the young girl said, “Oh, no!…” I pointed to her gas guzzler car parked in front of a fire hydrant with the “NO Pebble” bumper sticker!

The SFS form seems quite clear to me. Anyone can change his/her mind later on, but there’s nothing deceptive about what they signed.