Showdown brewing between Governor and Legislature over forward funding of education

There is a showdown brewing in the Capitol over education funding. It involves the forward funding of education that was passed last year by the Legislature. Last year, the House and Senate came to an agreement over forward funding $50 million for education for two years and passing SB 26 – the bill that allows for a draw of the permanent fund to be used for government services. This deal allowed them to pass a budget and gavel out.

Yesterday, Governor Michael J. Dunleavy (R – Alaska) held a press conference to discuss the budget and other fiscal issues. At one point, Becky Bohrer from the Associated Press referenced a legal opinion from Legislative Legal about the $30 million education funding for FY 2020. She asked if he saw that education money as off limits to veto. Before she could finish her question, Dunleavy interjected and said, “No, we see that it falls under the ability to veto if that’s what we choose what to do.” There was some more back and forth between Bohrer and Dunleavy. But what was more important is what Budget Director Donna Arduin added. She said, “They [the House] also had a technical error that I shared with them, that the education has not been funded yet in the House [Finance] Committee substitute.”

She is referencing the below letter, obtained by the Alaska Landmine. Arduin thinks the $30 million for education funding for FY 2020 should be a line item in the budget, probably because that is the only way Governor Dunleavy could veto it. By leaving that money out of the current budget, the money should be transferred based on statute. But in the letter she says if the money is not put into the budget then it will not be transferred or paid out on July 1, 2019. Interestingly, Dunleavy argues that the dividend, also in statute, is an automatic transfer. He seems to feel differently about this statute. 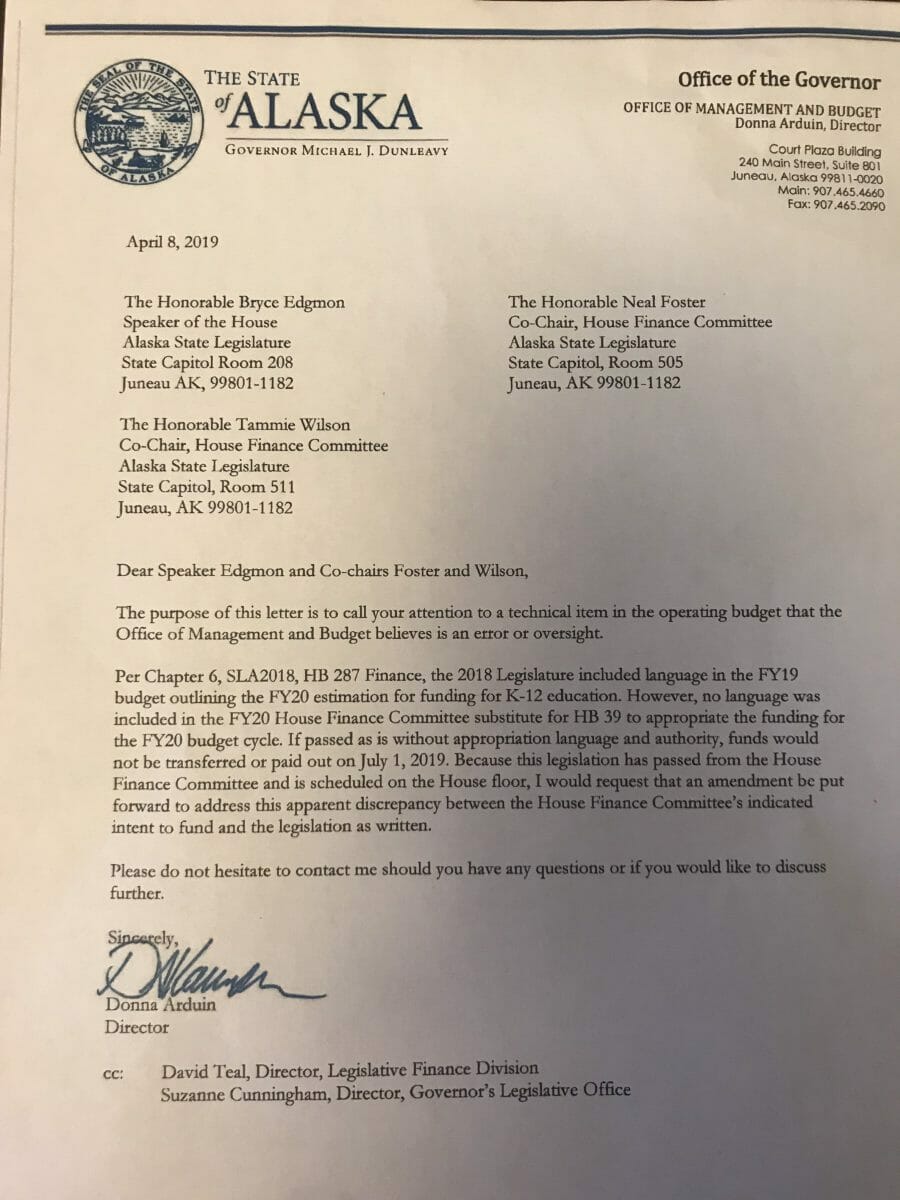 The Alaska Landmine has obtained several legal memos and emails regarding this issue. To quickly summarize, Governor Dunleavy thinks the forward funded $30 million education funding for FY 2020 is subject to his veto. Legislative Legal and Legislative Finance think it is not. This issue will very likely be decided by the courts unless Dunleavy decides to not challenge the funding.

Here is a letter from Attorney General Kevin Clarkson, where he argues that the forward funding for education by the previous Legislature is unconstitutional. 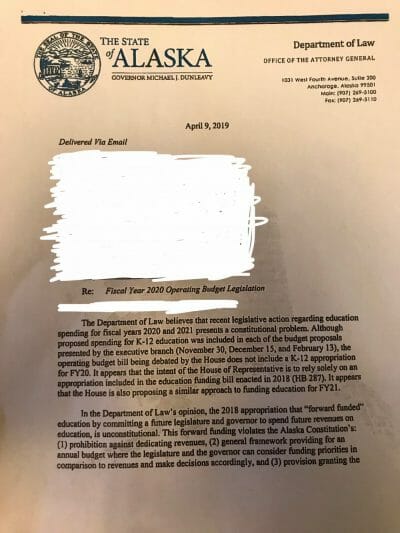 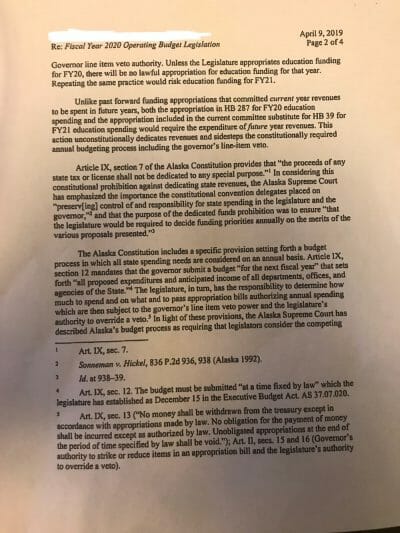 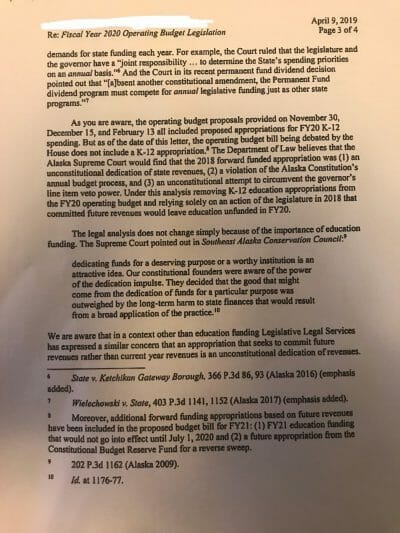 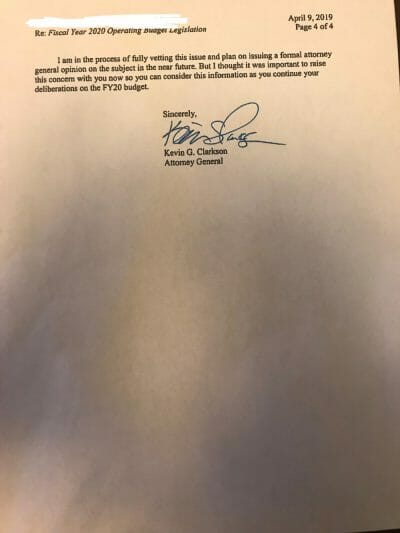 Here is a legal memo where legislative legal argues the exact opposite. The end says that, “Therefore, unless the Legislature amends or repeals those appropriations, or the Governor challenges the validity of the above appropriations in court, the Governor has a constitutional obligation to execute the appropriations enacted in ch. 6, SLA 2018 when they take effect on July 1, 2019.” 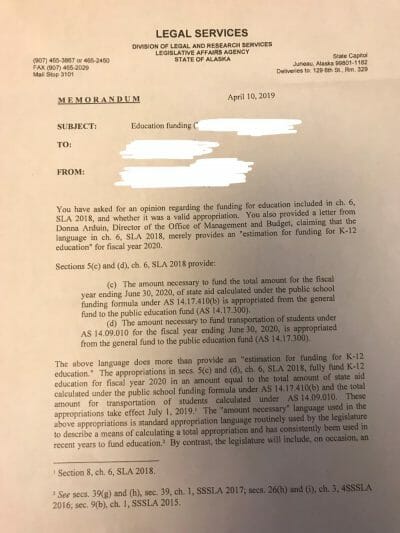 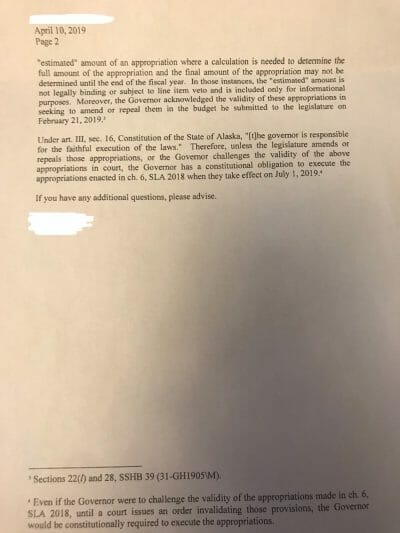 And finally, in this email from David Teal, the Director of Legislative Finance, he makes the dispute between the Legislature and Governor Dunleavy clear. He starts by saying, “This is the opening shot to declare the Ch 6 for FY 202 K-12 costs invalid.” He also states that the Constitution prohibits binding future legislatures, not frustrating a Governor. 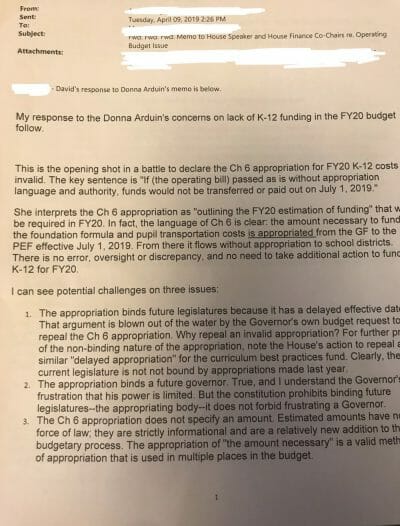 It will be interesting to see if Dunleavy holds his position on this issue. If he does, it will certainly end up being decided by the courts. The money in question only represents a small portion of total education funding but school districts have already budgeted for it. Challenging the forward funding of education and arguing that it is subject to his veto will probably not end up with a lot of public support. It could be a way to gain more leverage over the Legislature. Or it simply could be another $30 million they feel they can cut from the budget. Regardless, if this ends up in the courts it will result in a very public showdown between Governor Dunleavy and the Legislature. As I often say, “It’s about to get real loose.”