Senator Shower should leave Senate Majority, or be removed

Senator Mike Shower (R – Wasilla) went an another epic rant last week on the Michael Dukes Show. You may recall that Shower went on the same show in June where he attacked many of his colleagues and referred to them as “petulant.” This Landmine story explains that.

Shower doubled down on attacking his colleagues on his appearance last Wednesday (11/13/2019). You can listen to the whole thing here. It starts at 1:03:00. Dukes starts by saying how disappointed he was with Senator Josh Revak’s (R – Anchorage) answers on the PFD when he was recently on the show. Shower, who did not bother to show up to Revak’s confirmation vote, got real loose. He insisted that the PFD is, “Not a freaking welfare program!” He then talked about a possible statutory change to the PFD, but only if it is 50/50 and constitutionally protected. He goes on to say that he has decided to “hold the line” on the statute because his colleagues can’t be trusted to protect the dividend.

Dukes and Shower caution listeners to beware of candidates who talk about “protecting the Permanent Fund” as that is a new code for protecting it for government, and not the people. Dukes is hardcore pro-PFD. That may have something to do with his history of small claims.

According to Court View, Dukes has a history of small claims judgements that have included both wage and PFD garnishments. No wonder Dukes is so pro-PFD. 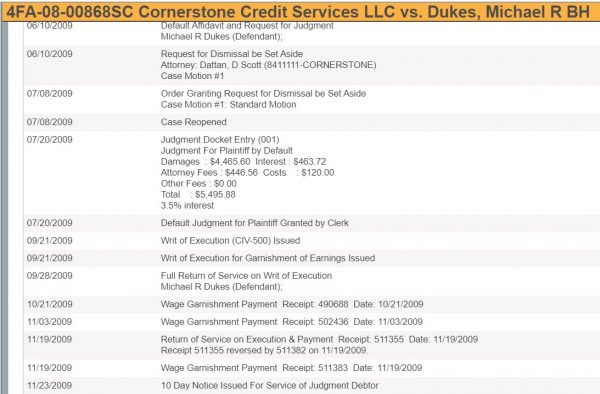 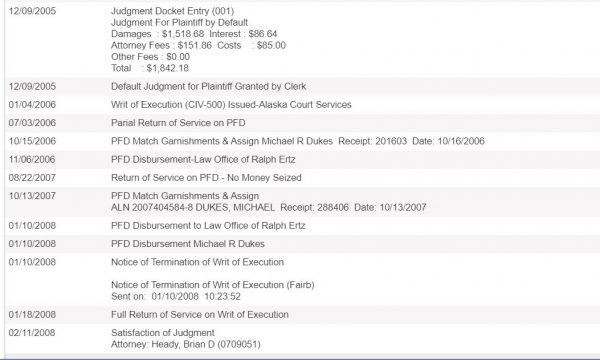 During the conversation, they bring up the late Senator Chris Birch and discuss his position on the PFD. It appears that Dukes and Shower are unhappy that an opportunity was lost to get a pro-PFD person to replace Birch. If Shower was half the man and politician that Birch was, he wouldn’t bring up someone who is no longer  around to defend themselves or explain their positions.

Shower and Dukes further discuss the 50/50 PFD split concept. Shower said that some legislators want to start negotiating at 70/30 rather than at the statutory amount. Shower exclaimed, “Like hell you are!” to any legislators who think they are going to start at 70/30 for negotiating. Shower then instructs Dukes to carefully ask legislators the tough questions when it comes to the PFD. He cautioned Dukes to not get hoodwinked by legislators.

Dukes goes on to again criticize Chris Birch and express disappointment that the balance of power in the Senate regarding the PFD has not changed. Dukes said,” Senator Birch was anti-PFD, he was very much pro-government spending. He wanted to leave us with a $600 dividend at one point, and use the rest of it for government spending. So I guess my question is, does this really change the balance if Senator Revak turns out to be the clone of Chris Birch that Cathy Giessel wanted?” Dukes views himself as a real player. I’m sure his dozens of listeners do too.

Shower responded that if Revak does not vote to follow the law then things will stay the same. He stated, “If he does turn out to take Chris Birch’s position, then nothing changes. If Josh comes in and holds the line like he did last session in the House, and votes to follow the statue and follow the law as it is written, then I would expect that we could see a break in the Senate.” Shame on both of them for expressing disappointment that they could not take advantage of the death of a good man for their own political agenda.

Dukes then asked Shower about reorganization in the Senate. Shower responded, “Let me be crystal clear. I don’t work for the leadership in the Senate. I work for the people I represent.” He went on to say that if, for example, Senator Lora Reinbold (R – Eagle River) should be kicked out of the caucus, or other potential moves leadership decides to make, anything could happen.

It’s clear that Shower is not happy in the Senate Majority, nor does he respect most of his colleagues. Remember when Shower, along with other legislators, went to Wasilla rather than Juneau for the special session? Remember when he, along with Senator Shelley Hughes (R – Palmer), ran away from the Capitol to avoid a crucial budget vote because they were afraid of the consequences of their vote? That is not how legislators should act.

Shower joined the Senate Majority and agreed to the conditions of membership. However, he continues to belittle and attack Senate leadership and many of his colleagues. He should do the right thing and leave the Senate Majority. If not, Senate Leadership should teach him a lesson and kick him out.

Well, he’s right. If the legislature wants to allocate a larger portion of the PFD to government largesse, then they should be upfront and change the statute. But they haven’t, because they like it this way – this way being the way where the rules are fluid and subject to their interpretation. It’s bullshit and it’s cowardly. Shower might be a douchebag, but that doesn’t make him wrong.

BEWARE of people who care about their constituents and think for themselves.

Which constituents? I can’t imagine you are talking about our hardworking public employees that are teaching our children, maintaining our roads, and much more.

The small claims here are against Dukes. I’m not sure I understand your point.

How nice of the Senator to be so generous with “OPM” (Other People’s Money) on a radio show. This is a very fair trade to Senator Shower because the state benefits to a sitting Senator far exceed any statutory PFD amount. And then “after office” watch as he (as so many before him) simply moves to another teat on the state hog. And the only relevant “law” Revak must follow is the law concerning state appropriations – which is the source of the PFD as confirmed by the Supreme Court.

I think this is very judgmental, for no good reason. First, I’d like to say that Courtview from 11-14 years ago should have no bearing on Michael Dukes’ opinion today. Second, who appointed the “binding caucus” the power to direct an elected representative on voting and thinking? Is this the Communist Party? The only reason Shower had to join the Majority caucus is to make sure that it stayed the majority caucus. It’s all abut the power of the Majority leaders to tell the other Senators how to think and how to vote… and that should be illegal. It’s very… Read more »

Really? Senator Shower is Honest . You Sir on the other hand? Grow up Landmine. Your Extreme Prejudice as a Socialist is Obvious..

Whenever anyone throws out the “OMG you’re a socialist!” I stop listening. It is the quickest way to show you are a troll without any real arguement.

“Remember when Shower, along with other legislators, went to Wasilla rather than Juneau for the special session? ” Yeah, I remember that Senator Shower and too few others followed the Governor’s call to attend the lawful session in Wasilla. The rest, in defiance of the Governor decided to hold an unconstitutional session to avoid facing their angry constituents. As for not being happy with and maybe not respecting most of the Senate Majority, neither do I, so again if those are Shower’s feelings, he’s right again.

This makes the Landmine appear to be a statist , ant-constituent mouthpiece for the “establishment”. Too bad he isn’t so passionate to see the people’s best interest be pursued by these chartered sell outs.

Says the son of Herr Giesel…….

So we get rid of the legislators that actually understand budgets and revenues and stealing and Walkers sneaky legislation!

Alaska land mine, be a part of the solution, not a party of the problem. Showers is a man of honor, something you apparently have none of.