Reinbold started out by talking about “a lot of homework” she had done on Cherot. She also spoke about multiple records requests she had done, her issues with the former Public Defender Quinlan Steiner and SB 91. At this point Senator John Coghill (R – North Pole), who chairs the Committee, told her to, “Please, get the the point if you can.” Reinbold responded, “Do not interrupt me. It’s inappropriate.” Coghill then told her to go ahead but to stop grandstanding.

Reinbold then said she understands that Quinlan Steiner has been hired on contract. Cherot responded by citing the Personnel Act and said she would want to seek an advisory opinion before answering. Steiner is not listed as an employee in the State of Alaska Employee Directory. Reinbold then started talking about how Steiner used to work under Cherot’s husband. It was unclear what she asking Cherot. Coghill again asked her to please ask a question.

Reinbold then started asking Cherot about her prior management experience but then started talking about Quinlan Steiner again. Coghill said, “So your problem is with Quinlan Steiner. I suggest…” Reinbold interrupted and said, “Don’t rewrite what I said. I also said it’s with management experience.” Cherot responded by talking about her previous management experience and added that she had not managed an office this size. She ended by saying, “It is a great challenge. And it’s one I take on. That I’m committed to. And I look forward to the challenge.” Reinbold kept on but Coghill told her that Cherot answered her question.

Here is where it got real loose. Reinbold said she had a hiring request for a public defender (referred to as SR) from December 2019. Coghill asked her how this was relevant. Reinbold then said she had done “Google searches” and said, “[SR] was married to Peter Seda.” Coghill again asked her the relevance of all of this. Reinbold, getting aggravated, stated, “SR has ties to terrorism.” She then started talking about all kinds of articles about SR’s husband, Peter Seda. Coghill again told her to please ask a question. Reinbold said, “She’s being quiet or she’s deflecting or she’s hiding.” Coghill told her that she failed to ask Cherot a question.

Reinbold passed out this 2010 AP article to members of the committee. 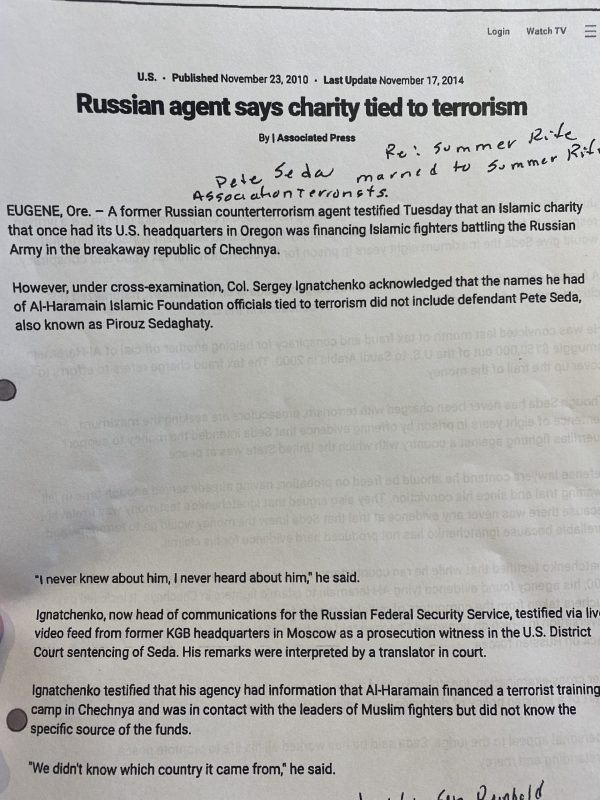 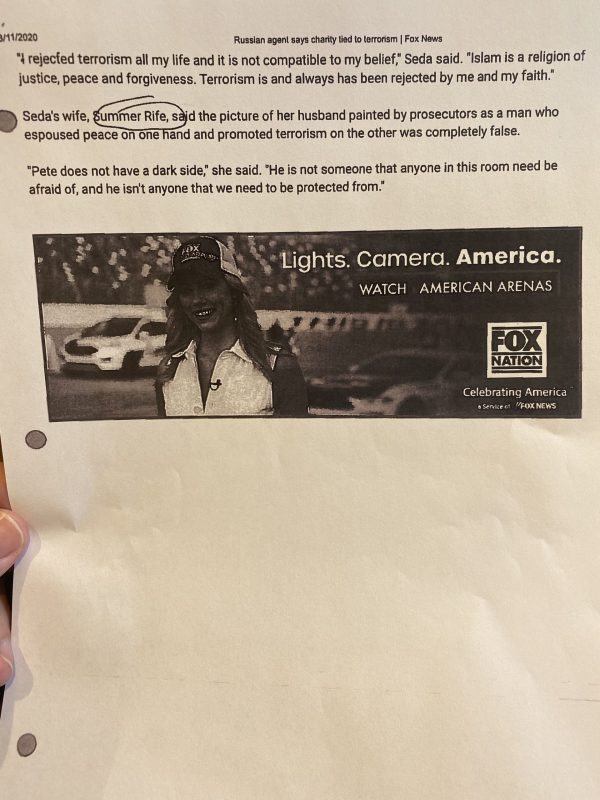 But the article states that Russian Colonel Sergey Ignatchenko said that the names he had for the organization tied to terrorism did not include Seda. A simple Google search shows that while Seda was convicted of tax fraud in 2010, the ruling was overturned by the 9th Circuit Court of Appeals in 2013. According to this article:

“This is a tax fraud case that was transformed into a trial on terrorism,” wrote Circuit Judge Margaret McKeown in the ruling. “The appeal illustrates the fine line between the government’s use of relevant evidence to document motive for a cover up, and its use of inflammatory, unrelated evidence about Osama Bin Laden and terrorist activity that prejudices the jury.”

A source confirmed that SR and Seda got divorced in 2014. SR is not listed as an employee in the State of Alaska Employee Directory. However, as Reinbold pointed out, Cherot did submit a hiring request for SR in December. A source confirmed that SR is currently attending law school at Gonzaga. She is set to graduate in May. Her plan is to come take a job with the Public Defender Agency after she finishes law school. Coghill then allowed Senator Jesse Kiehl (D – Juneau) to ask some questions. He told Reinbold, who had more to say, “Just a minute. There are other people on the Committee besides you.” Coghill asked Cherot to come back on Friday as time was running out. There were also multiple people on line to testify during public comment.

Reinbold was likely wanting to ask about a Facebook post she made before the hearing. In the below post Reinbold references a letter she received about Cherot. It includes, “She appointed a New York lawyer, John Loranger, who has posted on his Facebook page Anti-Trump, anti-police, anti-American Justice system, racism against whites, pro-illegal immigration invasion and anti-oil & gas development.” There is no listing of a John Loranger in the State of Alaska Employee Directory. However, what is even more strange is the source of this information. The Landmine has obtained the original email. It came from Michele Hartline, the mother of Administration Commissioner Kelly Tshibaka. Tshibaka oversees the Public Defender. Tshibaka has not responded to an email requesting comment. It’s not clear if she was aware that her mother contacted the Senate Judiciary Committee urging them to reject Cherot. 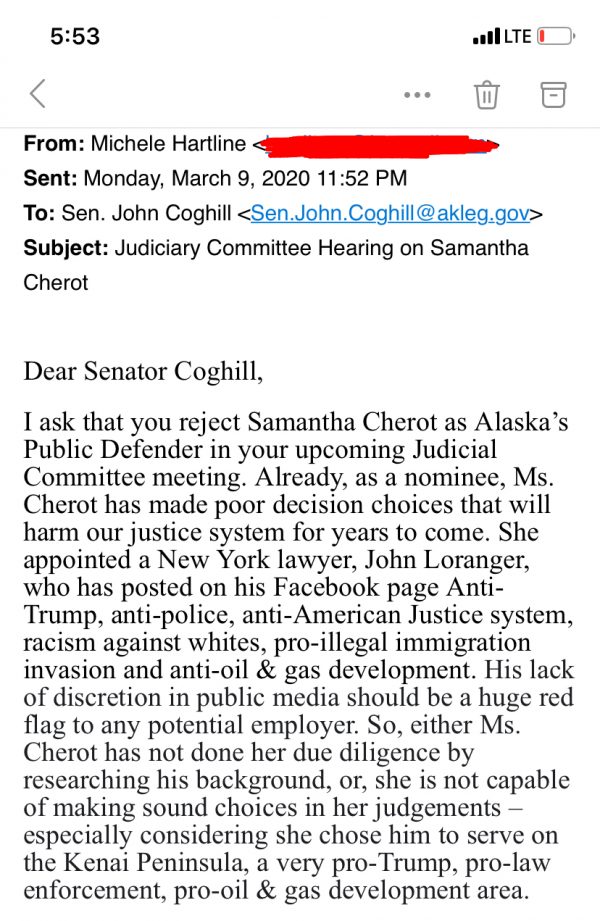 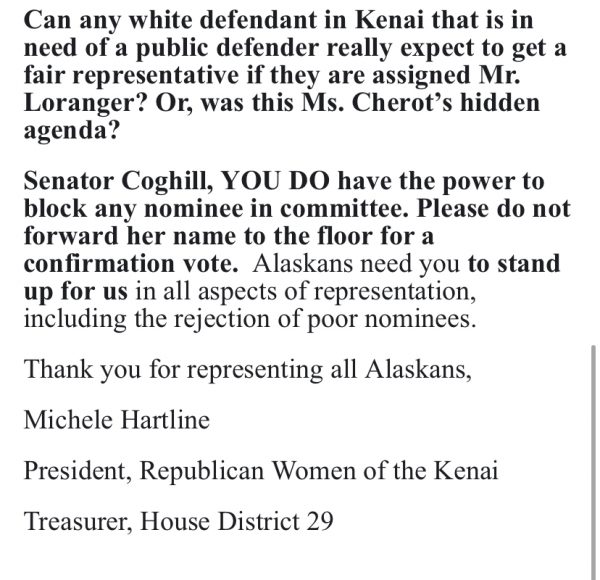 Hartline called in to testify in favor of her daughter, Kelly Tshibaka, during a February 28, 2019 meeting of the Senate State Affairs Committee. You can watch that here.

The article has been updated to only use the person’s initials. Senator Reinbold likely defamed her. It’s not fair to have her name show up in a Google search due to the careless actions of an elected official. Her name can still be seen in the article Reinbold handed out and the hiring request, which are public but won’t show up in a Google search.

I’m beginning to wonder if someone is spiking the water out in Eagle River. Can they elect a sane straight shooter for once?

You can always hear the clutch plate slipping when near Lora Reinbold.