The Republicans of Districts 9 and 10 met at the Menard Sports Center in Wasilla last night to choose three names to send to Governor Bill Walker. Walker will now have 30 days to choose one candidate to fill the senate seat recently vacated by Mike Dunleavy. The three candidates are:

After Walker picks a candidate, the senate Republicans will vote to confirm the nominee. Rauscher defeated Jim Colver in 2016 with help from the Alaska Republican Party, who were upset with Colver for who he was associating with in the house. Smoldon is a teacher in Anchorage (He also has an awesome mullet, something I hope Walker takes into consideration). Braund is retired military.

I arrived at the Menard Sports Center right before 6 pm. It was already full of people when I arrived. It seemed fitting and poetic they choose the Menard Sports Center as the venue to decide who replaces Dunleavy since he defeated Linda Menard in 2012 in the Republican primary. Now they will be choosing who replaces him at a sports center named after her husband, also a former state senator.

Early on there were some questions about who could actually vote due to the timing of Dunleavy’s resignation. Last weekend, the Districts held their conventions and choose new officers and precinct leaders. However, they adjourned to a time certain in order to leave time to fill vacant positions before the deadline to get the names to the Party for the state convention. This is a common practice. So the question was could the newly elected people vote? Party Chairman Tuckerman Babcock initially ruled in favor, however, District 10 Chair Doyle Holmes, (Also a contender for Dunleavy’s seat) challenged the decision. The appeal went to the Party Rules Committee who eventually ruled the newly elected officers could vote.

Initially, 10 candidates applied for the seat and were approved, however, Steve Menard had also applied but there were some questions about his paperwork. Babcock later ruled he could run bringing the number of candidates up to 11. Now they needed to choose three names out of the 11 to send to Walker – sort of. If the two districts could not agree on three names a “Plan B” was for each District to submit two names and then send those four to Governor Walker. Of the 11 candidates, three were District officials and one (Rauscher) was a state rep.

During discussion one man suggested the fewer names sent to Governor Walker the better because it lowers the chances of a “RINO” getting to him. The crowd seemed to be in agreement, so, after executive session, it was decided they would vote on the 11 names and that the districts would interview the top five, then vote again to get to three. This picture shows the top five: 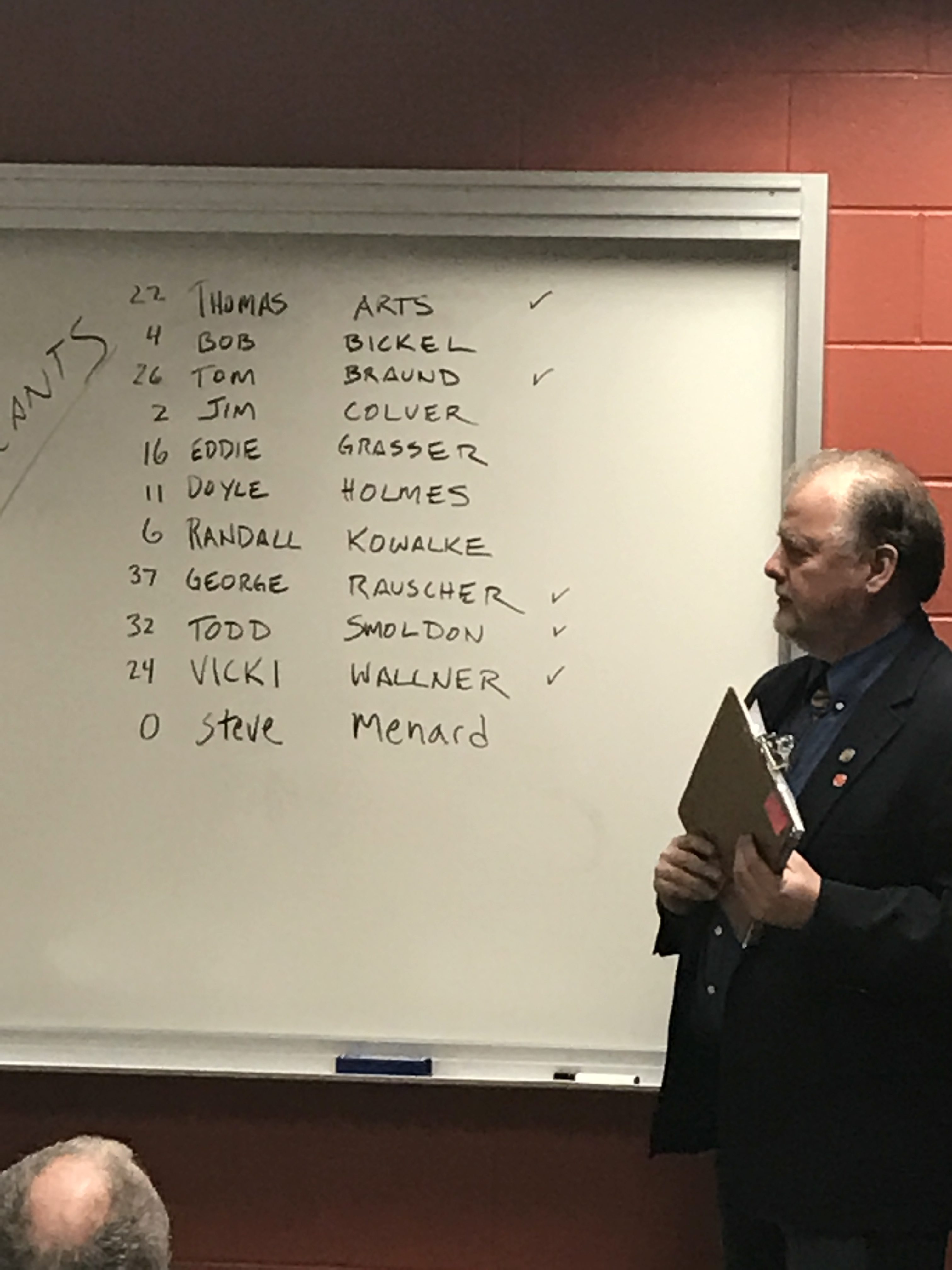 They again went into executive session to conduct the interviews. While I was waiting in another room I overheard three men talking about Dunleavy and how, in their opinion, the majority caucus screwed him for voting against the budget. I won’t go into details but let’s just say if Mike asked these guys to “take care of someone” it would be handled.

Once the interviews concluded the regular session resumed to decide on how to get down to 3 names – then things got interesting.

There was argument between the two Districts about how they would get down to three names. Each was concerned that they may not have fair representation. Remember Doyle Holmes? He was one of the original 11 who did not make the final five – Doyle was not done. He actually made a motion to consider the original 11 names when voting, instead of the five, to get down to the final three. What a legend. The crowd did not concur.

Eventually they agreed on voting on the five names. If three got a majority they would be the names to go to Walker. If they did not, they were back to the square one. It was starting to get late but Babcock told me they weren’t going anywhere, because if they did not get names to Walker by tomorrow, then Walker could pick anyone. After the lengthy vote, three candidates did get a majority. You can see their names circled here:

When asked about the event and process, Chairman Babcock commented, “It was an organic process of committees that both recently held District conventions. Both were well attended. It was democracy in action.”

Representative David Eastman was also in attendance. He was active in the process of selecting the three names, however, he did not put his name forward to fill the seat. When asked if he is going to run for the senate seat this year, he told me, “I would run for the senate if I was confident there was a good candidate to run for my house seat.”

And lest we not forget Doyle Holmes – when asked how he felt about the result, he commented that he was, “Unhappy.” In response to whether he would challenge the decision he said, “I’m not sure. I will know in the morning.”

I had two distinct takeaways from attending the meeting. One, I saw a lot of people I recognized from Facebook, people I rarely see in person, very conservative people. Trump supporters who on Facebook often come across as mean, however, in person, they were all very nice. A few recognized me and said they enjoy reading my column, even though they don’t always agree with it. These are good, hardworking people who care about their state and who serves them. I think we would all be better off if we talked more in person and less behind a computer or phone screen.

The other big takeaway was the total lack of media at the meeting. I was the only person in attendance covering the event. No Frontiersman, no KTUU, no KTVA, no ADN. These sorts of meetings are rare. They only happen when a legislator dies, resigns or is expelled – all very rare occurrences. Before the recent Westalke and Dunleavy resignations, the last vacancy to be filled was when Rep. Max Gruenberg passed away in early 2016. Governor Walker appointed Ivy Sphonholz, who was elected to the seat in 2016, and is still the representative. Before that, Rep. Carl Gatto passed away in 2012. Sean Parnell appointed Shelly Hughes, who is now a senator. These meetings are important and the public deserves to know about them. I will continue to try and bring you the political stories you won’t see anywhere else.