On Saturday, an invite-only meeting regarding the impacts of COVID-19 vaccine mandates by employers was held in the Anchorage Assembly chambers. The meeting was organized by Eagle River Assemblymember Jamie Allard and Anchorage Mayor Dave Bronson. Bronson’s Municipal Manager Amy Demboski, Chief of Staff Sami Graham, HR Director Niki Tshibaka, and several other members of his administration were in attendance. Assemblymember John Weddleton was also in attendance, though Weddleton stated that he had only stumbled upon the meeting by accident.

Public officials sat at the Assembly dais, and those giving testimony were allowed to speak for three minutes while a countdown clock ran, just as would happen at an official Assembly meeting. The meeting started with Demboski introducing those present and acknowledging the municipal employees there to assist with the event.

The meeting was not publicly noticed. During the meeting, Allard stated, “This is not an official meeting.” Bronson’s communications director, Corey Allen Young, told the Landmine, “The listening session was not a meeting of the Assembly, a board, or commission; thus, public notice was not necessary.”

But public resources were used to provide audio and video recording of the meeting, and security was provided by the Anchorage Police Department (APD).

The Anchorage Fire Department (AFD) typically runs the audio and video equipment used to stream Assembly meetings and other meetings held in the chambers. Assistant Fire Chief Alex Boyd told the Landmine that the Office of the Mayor had requested an AFD employee show up on Saturday to record the meeting. The meeting was not posted on the Assembly YouTube channel, but rather on Mayor Bronson’s newly created YouTube channel. Boyd said the request from the Mayor’s Office was made for the purpose of recording public testimony. Mayor Bronson recently announced a plan to reduce overtime paid to AFD employees. Boyd told the Landmine that the overtime incurred by the AFD employee who recorded the meeting on Saturday will be billed back to Mayor Bronson’s office.

Uniformed APD officers were also in attendance working security. Deputy Police Chief Gerard Asselin said he authorized the officers to be at the meeting at the request of the Office of the Mayor. At one point during the meeting, Anchorage resident Paul Kendall, who routinely testifies at public meetings, angrily voiced his frustration that the meeting had not been publicly noticed. Allard cut him off, telling Kendall, “This is not an Assembly meeting. This is not an official meeting. This is something that, we just said, we want to hear the public.” When Kendall refused to stop speaking, Demboski stated, “Mr. Kendall, you’re being rude to everybody who waited in line and waited their turn!” After some back and forth between Kendall and Demboski, a uniformed APD officer approached Kendall and escorted him away from the podium. Allard then stated, “Just so everybody knows I didn’t call the police, ok?”

The video of the meeting was posted on Mayor Bronson’s YouTube channel early Sunday morning. Not long after the video was posted, Must Read Alaska began posting clips favorable to Bronson on Facebook. A total of four videos were posted to the Must Read Alaska Facebook page on Sunday. Bronson’s YouTube channel was created on August 31, 2021, and only has three videos posted to it, including the one of this meeting. 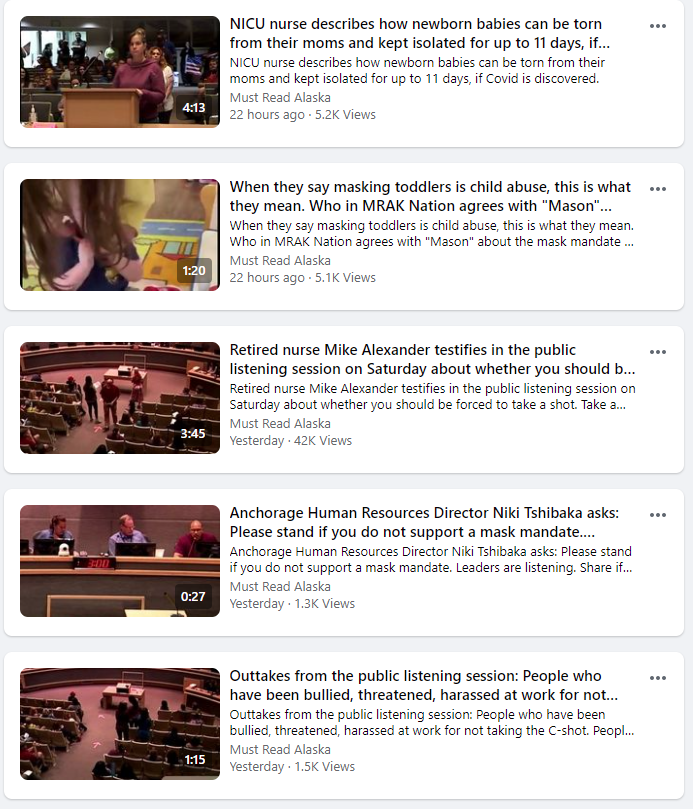 Allard told the Landmine that she had originally planned an invite-only meeting with Anchorage residents on Friday in the mayor’s conference room. She said she wanted to speak with people who were going to be fired from their jobs for not complying with COVID-19 policies. Allard said members of the Bronson administration sat in on the Friday meeting, at which around 75 people wanted to testify. When it became clear that they could not accommodate everyone, Allard asked whether she could use the Assembly chambers. Allard said invites were extended to people by her aid. Assembly Chair Suzanne LaFrance and Assembly Vice-Chair Chris Constant said they were not made aware of the meeting. Assemblymember John Weddleton, who was at the meeting, said he was planning to ride his motorcycle to Eklutna when he stopped by the library. He saw the meeting was happening and decided to watch and learn. He said Demboski suggested he sit at the dais, which he did.

Over the past week, Assembly Member Allard welcomed more than 70 healthcare workers to City Hall to share their experiences, which unfortunately included allegations of workplace discrimination and intimidation relating to COVID policies by a variety of healthcare facilities. As these residents came to share their experiences, it was clear the City Hall location wasn’t big enough, and the Loussac Library location was opened to accommodate the growing demand. The Mayor was invited to hear testimonies from teachers, nurses, and those in the medical field and other professions who say they are being discriminated by their employers (Providence, ANMC, Southcentral, ANTHC) for their COVID-19 vaccination stance. Those in the medical field say the shortage of staff is because there are many who won’t take the COVID-19 vaccine. The Mayor’s Conference room has been flooded over the past few days with people telling their stories of being discriminated, harassed, bullied, and ridiculed. The Mayor was there to listen. Assembly Member Weddleton, who had been at the library on Saturday, expressed an interest to listen to those in attendance and was welcomed to the listening opportunity.

Recent meetings of the Anchorage Assembly have featured many members of the public angry at the progressive-majority Assembly. Allard has repeatedly been involved in verbal altercations with Assembly Chair Suzanne LaFrance and other members of the Assembly. The relationship between Bronson and the Assembly began on uncertain ground and has proved to be deeply contentious. This meeting appears to be a way for Bronson and Allard to line up supporters in a friendly environment largely free from dissent.

With all those echoes in the room, it’s a wonder they can hear themselves think.

These people have lost their shit. I’m at a loss for words.

70 people….. what is that one percent of the total workforce? A statistician once told me there will always be outliers. How do these people feel about wearing condoms?? Where is their outrage?

Bronson campaigned against the Assembly (going as far as calling them idiots in campaign ads) and has been complaining and whining about them since the day he took office. Now it’s clear what his plan is: just pretend they don’t exist and create a new “invite-only” Assembly, complete with a full house of adoring supporters. Our hospitals are overflowing, Alaskans are dying at horrifying rates, and little Covid-denying Delta Dave is off playing make-believe. Fucking nightmare.

Disgusting! Bronson’s failure to protect the public health has and continues to sicken and kill Alaskans. Who pays for this private political rally using public funds and public resources including law enforcement? This is certainly a black eye for the Anchorage Police Department to allow themselves to be seen as “rent-a-cops” yet in uniform to support a blatant political agenda. The Bronson recall must start now!

Yes folks, we have three years of this show coming.

Pretty sure misuse of public funds qualifies as grounds for a recall vote.

What about violating state open meeting law? Just because Bronson claims that wasn’t a meeting doesn’t make it not a public meeting that had no public notice which is required.

What’s next for Jamie Allard? Will she come out and blatantly tell Alaskans that doctors and nurses are allowing patients to die and suffer to promote the vaccine?

Oh wait. She already did.

And the point of this Was???