Since publishing our special feature, The Bizarre story of Campbell Lake, the private lake that isn’t, last September, the situation on Campbell Lake has continued to unfold. After the initial story we released several follow up articles in which we reported that millions of public dollars had been spent on “private” Campbell Lake, and that Campbell Lake HOA and the Municipality of Anchorage had made numerous legal agreements and statements attempting to establish the lake as private.

A little over two months after our first article, the State of Alaska and Municipality of Anchorage issued a joint statement affirming that Campbell Lake is a public lake with public access. The joint statement also disclosed the existence of a public access section line easement on the north side of the lake. We had not reported on the north easement initially because we were only aware of the south easement, which crosses the von Imhof and Frost properties. The north easement proved to be better for most of those attempting to access the lake because it is short, unobstructed by trees, and has more access to street parking.

In January, an Anchorage resident created an event on Facebook called “Storm Campbell Lake, They Can’t Stop All Of Us.” Because the precise location of the easements was not clear, and the Muni and State did not seem interested in marking or surveying them, the Landmine created a GoFundMe to raise money for a survey. The easements were surveyed and marked, but soon afterward the survey markers on the north easement were removed.

Over the ensuing months, the situation has deteriorated. In one case, two boaters were confronted by a Campbell Lake resident in a motorboat and advised to move so that residents could enjoy exclusive use of the middle of the lake. The boaters were told that Campbell Lake is an “airport.” It is not–Campbell Lake is an FAA-approved floatplane base, no different than hundreds of other multiuse lakes throughout the state. Many members of the public attempting to use the north easement have been harassed, told that they are trespassing, and informed that they will be arrested by APD. Landmine staff receive near-daily calls, messages, and emails from Alaskans who want to use the lake but who feel uncomfortable or have been intimidated and threatened by residents.

Recently, a wire fence was erected on the waterline along much of the north easement, preventing public use. The Department of Natural Resources (DNR) informed us they are aware of the fence and agree that it is obstructing the easement. According to DNR, the Campbell Lake property owner claims that the fence was installed at the request of the Army Corps of Engineers due to erosion caused by beavers. DNR is waiting to hear back from the Corps to verify that claim.

Signs have also been installed on the north easement to deter public use. Another large fence has been put up between the property that includes the easement and the vacant lot next to it. Workers told us the State was paying for it but after further investigation it appears the Muni funded the construction as part of a storm drainage mitigation project. We are waiting to hear back from the Muni about why exactly it was built and how much it cost. The fence runs parallel to the easement and is not blocking it. 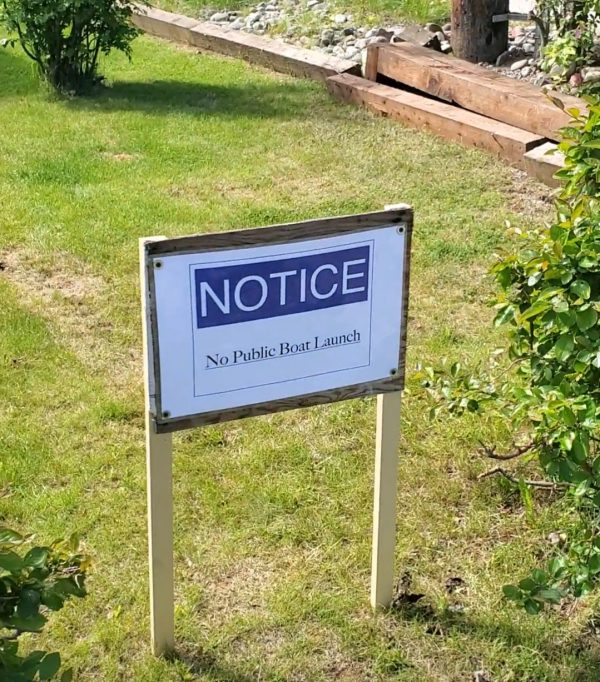 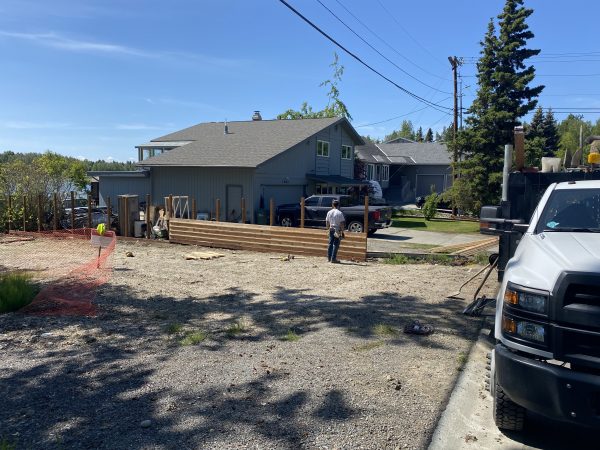 The owner of the property where much of the north easement is located, Gordon Franke, seems to believe the easement does not exist. In fact, when he purchased the home in 2002 the title report did not show the existence of the section line easement. According to a Limited Liability Report obtained by the Alaska Landmine, the original plat shows sections 10, 11, 14, and 15, and the lines between them, but does not show the section line easement. A note at the bottom of the report states the plat “does not purport to show all highways, roads or easements affecting the property.” The plat was drafted in 1969, and Franke’s home was built in 1976. It is unknown whether the original developer was aware of the section line easement, and Franke may have a case for a title claim for not being made aware of it. Regardless, Franke’s prior lack of knowledge of the easement does not eliminate the existence of the easement or the public’s right to use it to access and use Campbell Lake. 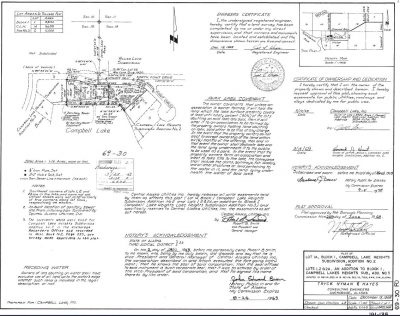 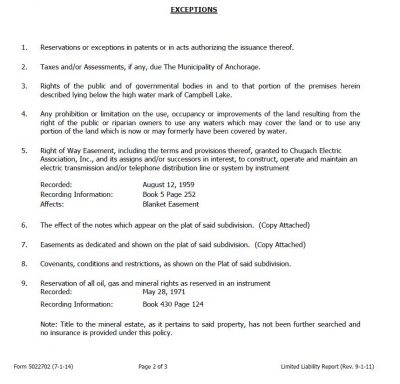 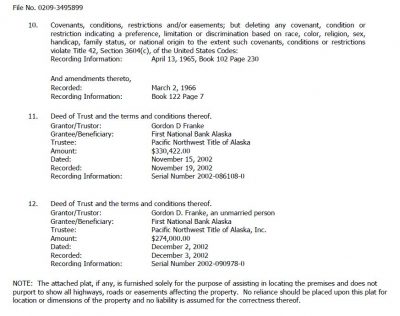 The situation on the north easement stands in stark contrast to that on the south easement. Our original reporting showed that when now-Senator Natasha von Imhof and her husband Rudi purchased the lot in 2004 they were well aware of the existence of the public access easement. The von Imhof’s petitioned both the Muni and State to vacate the easement, permanently eliminating public access on the south side of Campbell Lake. The State agreed to reduce the size of the easement and move it to the edge of the von Imhof property, but declined to fully eliminate it. Mr. Franke never attempted to vacate the easement crossing his property on the north side of the lake.

We requested statements from the mayor, as well as the legislators members of the Anchorage Assembly, who represent the area where the north easement is located. We heard back from everyone except Assemblymember Kameron Perez-Verdia. A spokesperson for Mayor Ethan Berkowitz said:

As outlined on page 3 of the joint letter:

The SOA email address listed in the letter is cc’d on this email. For your awareness, the Municipal Attorney’s Office is in touch with the State about this development.

Despite decades of believing it was a private lake, the city and state have determined it’s a public lake and if that’s the case, the public is required to have access.

An unfortunate complication is that a home was built literally on top of the easement, directly pitting the rights of the private property owner against the rights of the public. From my understanding, the Division of Mining, Land, and Water is helping to address the situation. I am confident that the state and the lawyers for both the Berkowitz administration and the homeowner can work something out.

DNR and statute indicate it’s public, and the state has a responsibility to manage it like all other public state areas. I trust that the department is working on solutions with all stakeholders for this situation.

I have reached out to DOT and DNR to find out more details on plans for the easement.

Thanks for reaching out. I’ve heard from a couple of constituents over the last few days and have been trying to reach the Muni attorney to get a better sense for what the administration’s plan is with respect to the easement. The public should absolutely have access to the lake. I don’t know if I will have an answer for you on what the Muni will be doing to ensure that access in the next day, but I will try.

All of the public officials who responded agreed that there should be public access. But apparently, that is easier said than done. The State has told us there are no plans to develop proper public access due to limited resources. Sources have informed us that some members of the Anchorage Assembly have spoken to the owner of the vacant lot next to the north easement, which is for sale, about a land swap so public access could be developed there. But there has been no proposal, and it’s not clear if a deal would be viable. To date, the Muni has not disclosed any plans to develop public access or policies to defend the public’s legal use of the existing easements.

Thank you for keeping the PUBLIC informed of PUBLIC land use , water access and right of way. For too long , the home owners of Campbell Lake have been allowed to keep their piece of paradise to themselves while the tax payers have been footing the bill for the maintenance of the lake.

It’s fun to learn about rights you didn’t know you had. It’s also fun to see someone lose falsely claimed property. I’ll be following this story with 20 pounds of popcorn on standby.

I feel sorry for Franke but what he is doing is still really wrong. If he just made a little path on one side of the easement and asked people to use that, almost everyone would get along just fine. Nobody wants to go in Franke’s house. But what he is doing right now, yelling at people and lying to them about the easement… that needs to stop. It is childish and dishonest. People have a right to use that easement and if Franke is infringing on that right then APD needs to come in to restrain Franke and cite… Read more »

Franke has a legitimate lawsuit for the value of his property against the surveyor and MOA for reviewing and approving a plat that does not show the section line easement.The liability to the surveyor has probably expired.

Thank for the update on this issue. Thought about this the other day when my son and I decided to search out Lake Otis, since we hadn’t been to it and only recently realized it does exist. After driving around the neighborhood a little, we found the public access walkway to get to it.

Franke’s issue is a title issue. Title insurance is why you pay for a title company at closing. And liability is triggered at the time of knowledge. He has a case.

Why does the MOA website still list the lake as owned by the HOA? It’s public lands. In fact, why does any lake in the Muni get listed as MOA lands when the state has defined these navigational waterways as public (read: State) lands?

Go deeper. How much public money has been spent on Campbell Lake for maintenance?