For the first time since its inception in 1912, Russia’s state-owned newspaper Pravda has awarded an American, Suzanne Downing, their coveted Excellence in Journalism award (Государственная Услуга). The announcement was made today from Red Square in front of the Kremlin. Aleksi Gribchenko, Pravda’s Editor-in-Chief, commented, “This was competitive year. Viktor Preobrazhensky convinced public that eight journalists critical of Kremlin all commit suicide in falls from balcony on same day. And Anton Kuznetsov has write fantastic expose about how deadly radiation spill in Novovoronezh was all natural causes. Very good work. But Ms. Downing is on other level. The sheer audacity, the unashamed partisanship, the commitment to outright falsehoods even in the face of obvious and overwhelming evidence – we at Pravda are truly humbled by Ms. Downing’s journalistic skills.” 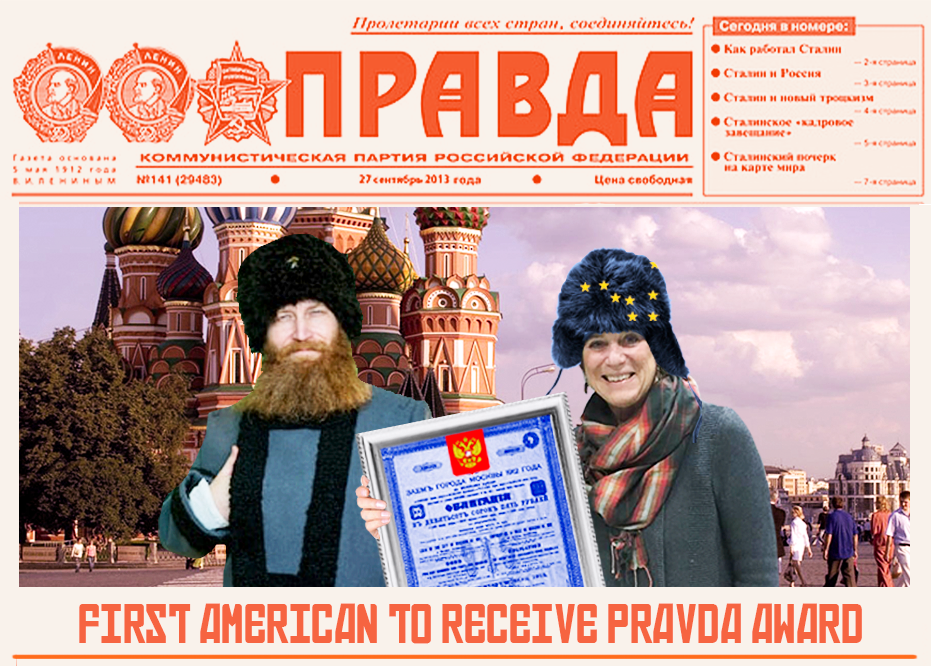 Downing was thrilled to learn the news. “I’m utterly peachy! Nobody knows journalistic integrity like the Russians.” She added, “I would go celebrate with a few drinks downtown, but Mayor Ethan Berkowitz has ordered the National Guard to forcibly close down all restaurants and reeducate dissenting restaurateurs in Berkowitz Camps on the Park Strip.” When asked by reporters for evidence that the National Guard had been mobilized, Ms. Downing simply replied “Libtards. Antifa. Forrest Dunbar. Global warming. Lizard people. Spendowitz.” before walking away.

During the ceremony Maksim Kamenev, Pravda’s Publisher, said, “We have think long and hard about award. In particular, judges were impressed by Ms. Downing’s stories: “Governor Bill Walker’s Hunger Games,” “Leftist calls for gas chamber for Rep. Ben Carpenter; Left stays silent on social media“, and “629 days since the dead voted.” We at Pravda are currently making study of Ms. Downing’s work in order to make enhancement of our own journalism. She is great inspiration to us at Pravda and we wish her all the best in coming year.”