In September 2018, the Board of Trustees of the Alaska Permanent Fund Corporation (APFC) passed a resolution allowing for up to $200 million to be invested in Alaska businesses. Historically, the Permanent Fund has stayed out of investing in Alaska in order to avoid conflicts of interest. Alaska has a long history of boondoggles that resulted from politically connected people obtaining access to government money. After the board passed the resolution, the APFC chose two private equity firms to manage the money: Alaska-based McKinley Capital Management LLC and North Carolina-based Barings LLC. Each company was allocated $100 million to invest in Alaska companies.

The 2018 resolution states, “The Alaska Permanent Fund Corporation should target a portion of its private equity and venture capital investments at opportunities within Alaska that provide a rate of return on investment consistent with the expected risk/return profile of similar investments outside of Alaska.”

The latest monthly performance report from the Permanent Fund shows that just over $88 million of the $200 million has been invested to date. Line 43, labeled “In-State Emerging Managers,” shows a 3.95% loss on this $88 million investment from the previous fiscal year. The other private equity funds the Permanent Fund is invested in, totaling around $14.7 billion, generally show significant gains over the same period. This discrepancy in performance is not necessarily unexpected, as the money had only recently been invested. Private equity funds often cite the “J-curve” theory for assessing returns, which holds that successful investments often show initial mild to moderate losses before turning positive. 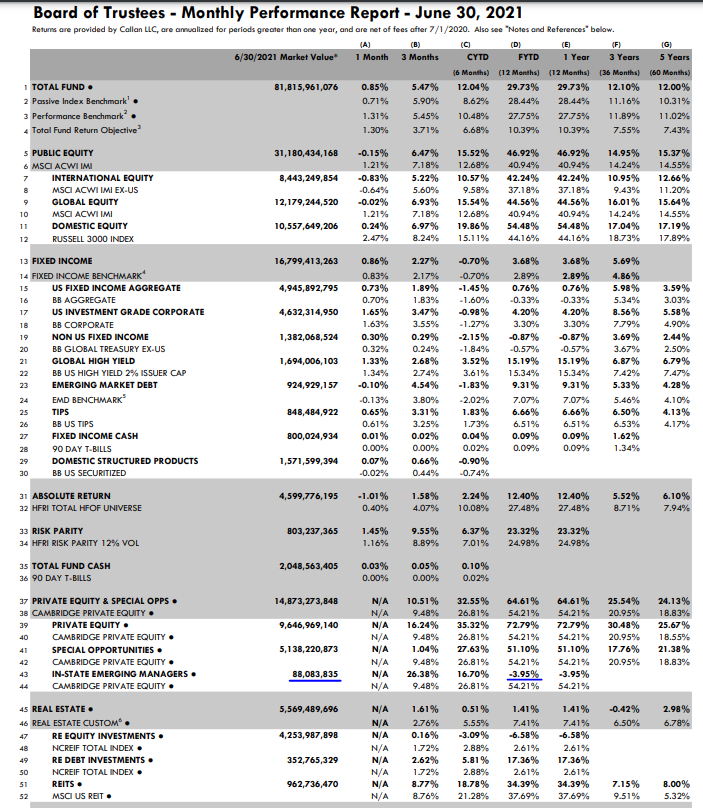 The APFC cited “Alaska Statute 37.13.200. Public Access to Information” in their denial of our records request asking where the money is invested.

Information in the possession of the corporation is a public record, except that information that discloses the particulars of the business or affairs of a private enterprise or investor is confidential and is not a public record. Confidential information may be disclosed only for the purposes of an official law enforcement investigation or when its production is required in a court proceeding. These restrictions do not prohibit the publication of statistics presented in a manner that prevents the identification of particular reports, items, persons, or enterprises.

Because McKinley Capital and Barings are private companies, they do not have to disclose where their money is invested–even when they are managing public money. The APFC suggested reaching out to them directly for more information.

McKinley has publicly disclosed three companies their fund has invested in:

Astra is a space company that is launching rockets from the Pacific Spaceport Complex in Kodiak. They launched a rocket this weekend that failed to reach orbit and crashed into the ocean. While McKinley has publicly disclosed they have invested in these three companies, they will not say how much money was invested in each company. In an email to the Landmine, McKinley stated, “The specific dollar amounts invested in each company and a complete list of Na’-Nuk Investment Fund investments are confidential in order to protect our clients and the value of their investment.”

An April 2021 Securities and Exchange filing shows that $117 million has been added to the Na’Nuk fund. This means that an additional $17 million has been invested in addition to the $100 million contribution from the Permanent Fund. The filing also shows the minimum investment is $1 million.

Barings initially responded to a request for more information and asked to set up a phone call. But after realizing they had been contacted with a media request, their managing director instructed us to contact their chief communications officer and chief of staff. An August 18 email to them has gone unanswered.

The APFC did respond to the records request with several heavily-redacted financial documents from McKinley and Barings. Despite the frequent redactions, the documents, and recent monthly performance reports, reveal some interesting data. The prior May 2021 report shows that just over $53 million had been invested. This means that between May and June 2021, $35 million was invested with an unknown entity or entities.

The reports also reveal some interesting data on management fees and expenses. McKinley’s March 2021 quarterly statement shows the Nu’-Nak fund has invested over $44 million. When capital contributions, net investment losses, and the $17 million unrealized gain (see below) are factored in, the total amount is $60,584,593. When this number is subtracted from the balance, it leaves $3,192,403. The only thing redacted in that document are expenses and fees, so that is likely what the redacted line here indicates. That number divided by the $44 million that has been invested is 7.1%. This suggests that management fees, legal fees, and other management expenses may have reduced the value of the McKinley Na’-Nuk fund by 7.1% since its inception in 2019.

McKinley’s June 2020 capital account statement shows that a $5.5 million had been invested. It is possible that this amount was invested in Astra, which at the time was a private company. Astra went public this February. An increase in the value of Astra stock may be the source of the $17 million unrealized gain shown in the March 2021 quarterly statement. Peter Pan Seafood Company and Aleutian Airways are private companies, and we don’t know if the money has been invested in other companies. 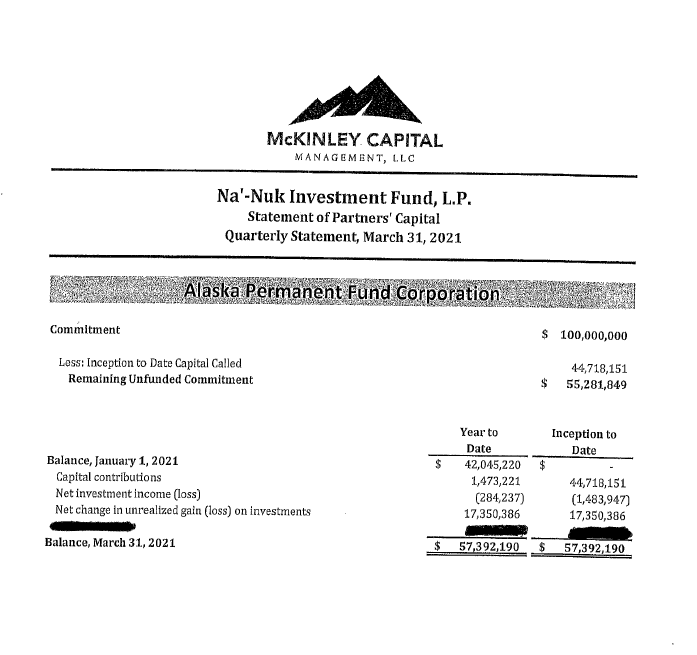 The Landmine was surprised to learn that the public is barred from finding out where $200 million of public money is being invested–particularly since that money is intended for investment in Alaska businesses. It’s common for investment managers to disclose investment holdings to their investors on some schedule. For example, quarterly or annual reports. The APFC’s refusal to disclose where the money is being invested means that the fund’s owners (Alaskans) could be stuck with a loss without knowing where the money went. $200 million, while a lot of money, is insignificant relative to the Permanent Fund’s other investments. While a big loss or gain will not have material impact on the fund, it is important the public knows where the money is invested.

In their response to our records request, the Permanent Fund stated, “You may seek immediate judicial review of the denials by seeking an injunction from the superior court under AS 40.25.125.” The Landmine is in the process of calculating costs associated with a judicial review.

Thanks Jeff. Foxes guarding the chicken coop? Alaskans stuck with a loss? Where have I seen this movie before?

If you’re taking public money and placing it elsewhere, no matter the purpose, it MUST be available for inspection, reporting, monitoring etc. Else you are effectively stealing.

Please move forward with the injunction. I am so tired of thieves. Our entire state congress needs to be investigated!!

Leave the fund alone! Jay Hammond did this for us, yet politicians douchebags cant resist screwing us and making themselves richer! I say get rid of ALL politicians and govern our own lives! Both parties suck! Sick of it all!

TLP: Green
Computes why http://www.usajob.gov has a lot of IRS jobs for the State of Alaska. FAR Part 3

Aleutian Airways is a d/b/a of Sterling Airways a Florida company funded by an east coast private equity firm. They received permanent fund money to hurt an Alaska based company.